Google today officially announced its new music subscription service, Google Play Music All Access, at the Google I/O conference in San Francisco. As reported yesterday afternoon, the service is designed to compete with Spotify, providing songs on demand that can be streamed to a computer or mobile device. 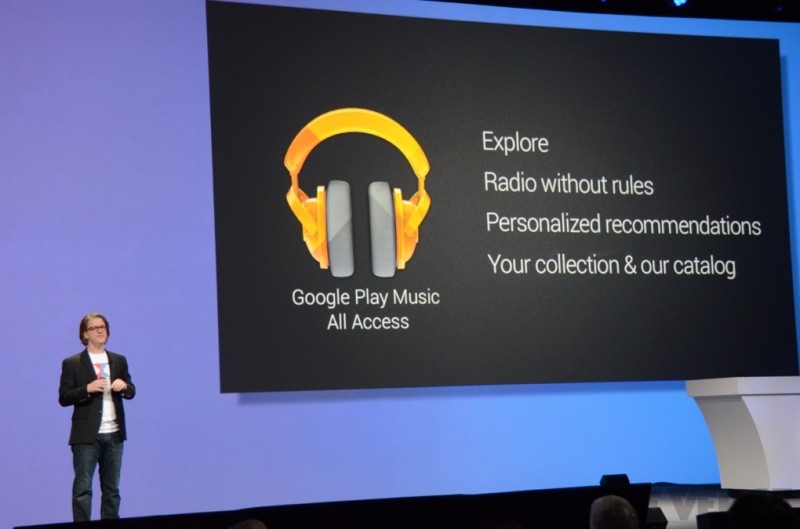 The service, which is built on Google's existing Google Play Music Store, will cost $9.99 per month with a 30-day free trial available. Google is, however, offering a discount for early adopters. Those who begin the free trial by June 30 will pay just $7.99 per month. The Verge has a rundown on a few of the available features for music discovery and recommendations.

A recommendation engine will guide users towards new music they may have already discovered. As demoed on an Android device -- it also works in a standard web browser -- All Access incorporates both local tracks and those available for streaming into one master searchable library, a marked improvement over much of its streaming competition.
Click to expand...

Google's tagline for Google Play Music All Access is "Radio without Rules," a small jab at Apple's upcoming Pandora-style music service, iRadio. As of last week, Apple was still in negotiations with music labels but is reportedly aiming for a summer launch of its own music subscription service.

I'm not sure if this is really a direct threat to spotify..

How does it compare against Spotify?

Looks like a good alternative to Spotify,
but only iRadio will have The Beatles
4

According to Engadget it also has a free ad based service as well as paid.

I am watching the i/o right now and didn't see anything about Free with Ads.

"As anticipated, All Access will come in both free (ad-supported) and paid flavors. A subscription costs $9.99 a month in the US, and all users will get a 30-day free trial. The service is launching today, and if you sign up before June 30th, you'll get $2 off the monthly fee.'

Edit.
Engadget updated the paragraph and took out the Free with Ads comments.
Last edited: May 15, 2013

See no point in paying for music when things like Pandora are free.
W

why is that guy not wearing a pair of Google Glasses?!
S

I'm looking forward to trying this out. Though I do like living in the dark ages and buying music on CDs.

pirg said:
See no point in paying for music when things like Pandora are free.
Click to expand...

but Pandora sucks. you cant simply play what you want i always end up just skipping till i reach the limit cuz it never plays what i want.

this has the best of both "worlds" like Spotify which i will stick with cuz it does not get added to my data volume on my iPhone.

Apple has to get the negotiations done like yesterday. Google is putting the pressure on and rightfully so. Didn't really hear anything that made this music service any better than current ones but it definitely is getting a little hotter in kitchen for Apple...

Looks like it has offline ability too... Spotify should be nervous.

There's a couple of real radio stations that will have a problem with the term "Radio without the Rules".

So the big news at Google Uh/Oh is a Spotify copy? There is nothing compelling here to make anyone switch from Spotify.
S

I don't pay for spotify.

When you create a radio station - can you swipe/remove songs in the play list?


ValSalva said:
So the big news at Google Uh/Oh is a Spotify copy? There is nothing compelling here to make anyone switch from Spotify.
Click to expand...

Why does there have to be something to switch people? Is everyone ON spotify?

Second - the reason why some might switch is because they like Google's ecosystem and want a one stop shop. This provides that.

Also - I don't think you can access your entire music library anywhere via spotify. Right? With Google's service - you can - in addition to millions of tracks

pirg said:
See no point in paying for music when things like Pandora are free.
Click to expand...

A lot of people don't like listening to single songs by different artists and instead want to hear albums. Pandora is completely useless to someone like me, free or not. I'll gladly pay $10 a month for access to many hundreds of thousands of full albums. This is why Apple's offering, if it's modelled after Pandora, is going to be a non-starter for me. No albums, no deal.
A

This is desktop and on mobile Android only.

I wonder if that is a licensing issue.

Apple's service might be iOS only in that case.

bushido said:
but Pandora sucks. you cant simply play what you want i always end up just skipping till i reach the limit cuz it never plays what i want.
Click to expand...

Maybe your tastes are too picky?

Pandora just takes some guiding - thumb down anything you don't want on a station, even if you like the song. I have about 10 different stations on Pandora that play almost only music I want because I've taken some time to optimize them.

I use both Pandora and Spotify a lot - Pandora is great if I want minimal intervention, Spotify is great when I'm looking for specific songs or artists or albums.

This is a boring development. I prefer iTunes model where I have my music on demand. My iPhone has an iPod.

How many streaming audio services do we need? Surely we'll see some consolidation in the next few years. This doesn't serve my personal needs but why can't Google or Apple come up with a Netflix style streaming and do it better (with a larger catalog) at similar or better prices?

US only ? if it's a worldwide launch, google could crush itunes.

Four oF NINE said:
This is a boring development. I prefer iTunes model where I have my music on demand. My iPhone has an iPod.
Click to expand...

---
if only apple would release a "spotify" for tv shows ... which will never happen with those greedy networks but one can dream
A

what a joke, $120 a year? no thanks
I still dont see why people "buy" digital music, much less "rent" it...
they will just have a new high bandwidth 24bit format soon
and the networks will slow down once again
data plans will explode and everyone gets price gouged, awesome