CarPlay Google Maps has updated their app for CarPlay!

Woooo! Been waiting forever and can’t wait to try it out.

Anyone have opinions?
B

Suddenly, I want to go for a drive. For science, of course... 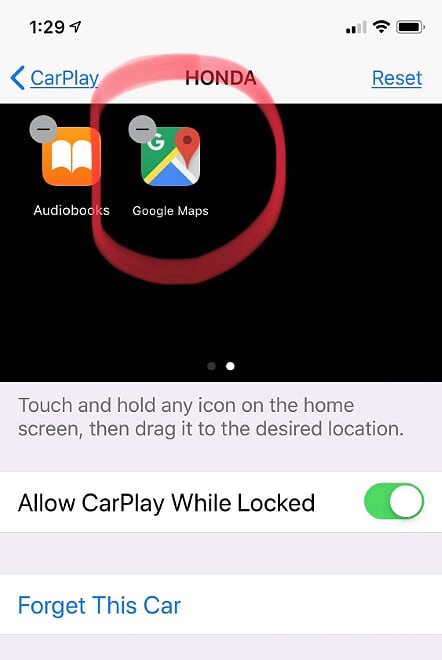 I use Waze, so I guess I am still waiting.

Will there be a way to use google maps with Siri?

What a time to be alive!

Can't wait to try this out!

Yep I just saw this. I’m going to try it out on the way home.
D

Well that was a slight disappointment so far. Two things I noticed so far from just firing it up in the car but not using it yet.
1. I tried giving a location through voice and it wasn't even close. I said the local elementary school and it only found one thousands of miles away and didn't even use the right name. Typing it in on the website gave the correct location so it should be able to find it.
2. There was no option to send an address to the car's GPS. In Apple Maps, I could send the address to the car's gps instead of mapping in the car. I use it once in a while when I need to use the phone for something else.

Then again, this is version 1. But I would have thought they would have known what to bring over as the app has been out on Android Auto for a while now.

Just got it, checking it out now ...
[doublepost=1537306097][/doublepost]OK, great, works like I'd expect, general search and specific location both worked via voice, UI seems reasonably responsive (on an iPX).

It's Google Maps, works the same way as on your phone, smooth and responsive, colors and detail all the same. Best of all you get the little speech bubbles telling you that if you take the Long Island Expressway instead of the Northern State Parkway it's 2 minutes longer *during* turn-by-turn navigation. No need to back out to an overview like so many other apps do. This is worth the price of admission alone. I'm glad this killer feature was not removed.

CarPlay integration is an afterthought. You can't ask Siri to "take me to Starbucks" as that will launch Apple Maps, there is no way to make Google Maps the default. You can use voice once you're in Google Maps but it requires scrolling to (or touching on) a microphone icon that's in a submenu and not easy to find and not quick to get to. As a result of all of this, its downright difficult to enter an address where it's super easy with Apple Maps.

In my 2018 BMW, disappointments lie within the iDrive system, when you choose the option to "Use Maps In CarPlay" it only launches Apple Maps, there is no option to launch Google Maps instead. My iDrive controller has the ability to accept handwriting, but handwriting does not work with Google Maps. Perhaps BMW will make a future update to provide these nuances. Perhaps it's Apple's decision.

So it's great to have Google Maps on a large screen and it's great to get those speech bubbles as you drive on a highway using turn-by-turn. But it's an orphan app as far as CarPlay and the OEM navigation is concerned with no Siri possible and no shortcuts allowing a launch straight to Google Maps, Apple Maps being the default and taking the convenience all to itself.
T

Yikes I ran into a bug more than one time when it tries to reroute after missing a turn and it isn’t able to.. it just flickers rerouting (and yes ample time went by) forcing me to close the app and relaunch it. Scary.

Also, iOS is killing me with always reading off my text messages through the speaker. That may be the determining factor of me leaving CarPlay offf... I was so looking forward to google maps

boltjames said:
You can use voice once you're in Google Maps but it requires scrolling to (or touching on) a microphone icon that's in a submenu and not easy to find and not quick to get to. As a result of all of this, its downright difficult to enter an address where it's super easy with Apple Maps.
Click to expand...

In my VW, the microphone is always on screen - in the bottom left corner.


boltjames said:
You can't ask Siri to "take me to Starbucks" as that will launch Apple Maps, there is no way to make Google Maps the default.
Click to expand...

Yep, Siri needs to die in my car... she's deplorable. & I can't use Google Assistant either (due to phone being stored flat in its compartment) - I use it constantly in my work vehicle (need to conjure it via 3D Touch) to call businesses & it's just about flawless at understanding me & quickly finding the relevant phone number.... Siri's just not smart enough.

For the most part, I'm glad Google Maps is finally here. Now all my saved locations are in my car & can easily be requested.

The next thing Apple needs to do is replace Siri with Google Assistant...it just makes for a safer driving experience.
You must log in or register to reply here.
Share:
Facebook Twitter Reddit Email Link
Register on MacRumors! This sidebar will go away, and you'll see fewer ads.
Sign Up
Top Bottom