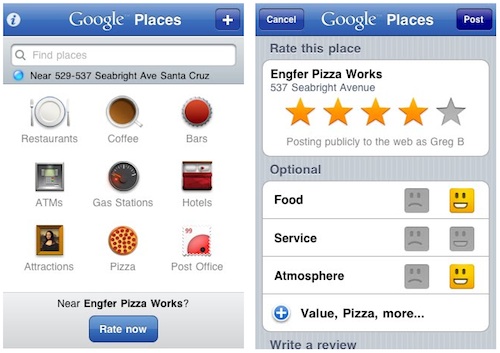 Google today announced the launch of a new Google Places application for iOS devices, offering users the ability to search for nearby places and incorporating the users' own ratings in the results algorithm.

In case you aren't familiar with Google Places, it lets you quickly search for places nearby and personalizes the results based on places you've rated. We get you started with a few popular search categories, but you can also tailor the list by adding your own favorite searches. This makes it fast and easy to find the best places for you with little fuss.
Click to expand...

The new Google Places app also integrates the company's "Hotpot" social ratings and reviews functionality, allowing users to easily rate restaurants and other places right from the iPhone app while they are at the locations. These ratings and recommendations over time are used to inform Google's own recommendations for users.

Just fire up the app and hit "Rate now." It will use your location to guess your current place and let you post a Hotpot review right from your phone. But it's not just about getting to say what you think - the more you rate places, the more you're sharing about your tastes and the more we can give you personally tailored recommendations.
Click to expand...

Google Places is currently English-only, but new localizations and features are coming "soon".

Here's my issue with these Google apps... I have the Google Mobile app for the iPhone. Great app for voice search and using Google Goggles. There is also an "app" tab you can click on that shows a list of other things you can supposedly use from within this app; Google Books, Gmail, Maps, Earth, Talk, Voice, etc., etc., but clicking on any one of those, not only doesn't launch these services within the Google Mobile app, it doesn't even launch the separate, individual app(s) I already have installed (I now think I have 6 official Google apps installed on my iPhone) instead, it launches the Safari browser to use each service, including Maps and Earth! Why?

Why is Google launching all of these separate apps instead of integrating them all into the main Google Mobile app which has links to most of these services anyway? Just doesn't make sense. It would make more sense if they charged for each app and then we could accuse them of being greedy and just trying to milk us for money, but they're not even doing that! It's just clutter on our iPhones when it could all be streamlined into the one Mobile app they already have set up for this!

Unimpressed. While the app is more usable than their website, it has some major limitations and issues.

what does this offer us over the hundreds of similar apps like yelp, where, nearby places etc, many which offer augmented reality views?

deenybird said:
what does this offer us over the hundreds of similar apps like yelp
Click to expand...

it offers the fact that google collects all this data, knows where you are, where you are going, this way it can show you much more useful ads