Got another MDD PSU. Is it bad as well?

You are using an out of date browser. It may not display this or other websites correctly.
You should upgrade or use an alternative browser.
X

So a while ago I posted a thread/topic about my MDD with a bad psu. A member was kind enough to ship another to me for only the cost of shipping.

I finally decided to test it today and it seems to have the same exact results as my last PSU did, so now I am wondering if this PSU is also bad or if there is something else going on.

My results: With the PSU plugged in, I press the power button. The light comes on, and immediately goes back off. If I hold down the power button, the light will stay on until I release it, and it goes off.

No fans, no sounds, nothing. That is the only result I get. Does this equal the PSU, or something else?

A short somewhere in the main board will cause the same symptom.
X

Is it a Samsung or a AcBel PSU, and what wattage? If it's an Acbel what revision (either A or B).

All this info is on the label on the PSU. If you have the old PSU still tell me that one's info too (if it's different).

Xandros - Samsung Revision B. 360 Total Watts.
Nameci - What is that and how do I do it?

Edit: Okay, found the PMU reset button. Also checked the battery and its reading at a steady 3.6 volts. Still having the same issue as mentioned.

My original MDD showed exactly this (though not after a PSU swap), PMU reset fixed it - there was a specific procedure to do, which I can't now remember, it wasn't just a case of pressing the button and job done - can anyone here remind me?

Also, is it a busted PMU?
X

Edit: Okay, found the PMU reset button. Also checked the battery and its reading at a steady 3.6 volts. Still having the same issue as mentioned.

Edit 2: Read that the battery can still be bad and show good voltage though...?
Click to expand...

I doubt this is a PMU issue, or anything to do with the backup battery. Though it is possible for the battery to show a good voltage making it seem OK, but put a load on it and if it's bad it can crap out quite quickly. That still shouldn't actually prevent the machine powering up (I've never encountered it in 20 years of using Macs at any rate and nearly all my Macs have ended up with dead backup batteries at some point or another).

Anyway the fact the light comes on as long as you press it suggests to me the PSU simply isn't pumping out enough voltage to the logicboard to start it up. You might be unlucky enough to just have two PSU's suffering the same or similar problems. Though you can test the PSU a few ways.

First of all, you could jumper the PSU to see if it will turn on without any load at all. Not a very technical test but it will at least show you if the PSU will turn on or not. Make sure it's switched off and unplugged, (and I suggest leaving it for a good half an hour unplugged too for safety reasons); remove the 24 pin connector from the logicboard if it's not already then get a bit of wire and shove it in the green wire's pin on that 24-pin connector, then shove the other end in one of the black (ground) pins. Plug it back in and turn on the power. If it turns on, that's a sort of good sign at least.

If it doesn't come on (you'll know if it's on, the fans will spin up), then the fuse inside the PSU might be blown. However I would have expected there to not even be any power to the button to light it up if that were the case. The second test is a bit more thorough, and follows Apples guidelines. Have a look here for info:

To test the pins as explained on that page, you need to remove the black "sheath" on the connector which is (I find) easier said than done; it is possible by prising it but it can and will break easily. Not that it's essential or anything, but, anyway the tests have to be done with the connector plugged into the logicboard so you need the sheath off so you can stick the probes of the tester in the top.

If you get through these steps and wind up at stuck at a section telling you the PSU is bad then I suggest you go have a look at this thread (and many similar to it) on badcaps.net:

That guy had identical symptoms to you and also the same PSU variant I believe (Samsung). He replaced some capacitors and got the thing working again. Though it wasn't particularly easy from what I can tell. I've been working on a MDD PSU myself lately (though it's an Acbel) and it can be rather fiddly replacing the caps, but it's worth doing since they're inexpensive parts and if done right can essentially give a MDD PSU a new lease of life. Badcaps.net has a hell of a lot of useful info on the whole ordeal anyway and the forum's got plenty of helpful knowledgeable people that would no doubt be willing to help you out if you needed it. There are actually quite a few posts regarding the MDD PSU's on there that you can find if you search for them too.

Of course you might test the PSU and find that it passes all the tests. That pretty much leaves three options; your logicboard is kaput. The CPU daughter card is kaput, or the power button is for some reason kaput (that last one; try moving your finger around, I've seen one guy on badcaps go to the trouble of replacing caps in his MDD PSU only to find the button had gone a bit wonky and had tobe pressed at an angle to work, you never know you might be lucky and that's all that's wrong with it).
Reactions: Xmsteel
X

I tried to jump it and it seems dead. Nothing happening at all. If it is the fuse, is it just a regular fuse you'd find that can just be popped out and a new one placed in?
X

It may do, I don't know about the Samsung's though as I've only seen the inside of the Acbel. The Acbel's have a fuse but it's soldered onto the board and contained in a black protective jacket so it's not immediately obvious, but it is (or should be on the Samsung) right next to the brown positive wire: 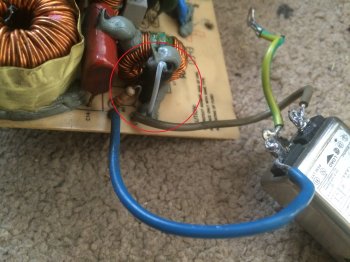 Granted the samsungs are a different design so they may well have it clearly visible and it might even be like you want and easily popped out.

Even if it turns out the fuse is blown though, there's a chance it has blown because some other components are failed. I believe that if your PSU has CapXon branded capacitors for it's start up caps then you're possibly looking at having to replace them anyway, they're notoriously bad quality and can cause fuses to blow and also the thermistor to die too as well as other things.

I have a dual 1.25 that does the same thing, it will only boot when an ADC display is connected.
X

Maybe some good news, I opened her up and noticed it does have a fuse that just pops out, like I had hoped. I just don't know if its relevant. It doesn't look blown either, though there is a black spot it almost looks like sharpie or something.

Edit: And indeed it has all Capxon capacitors. None of them look bad. 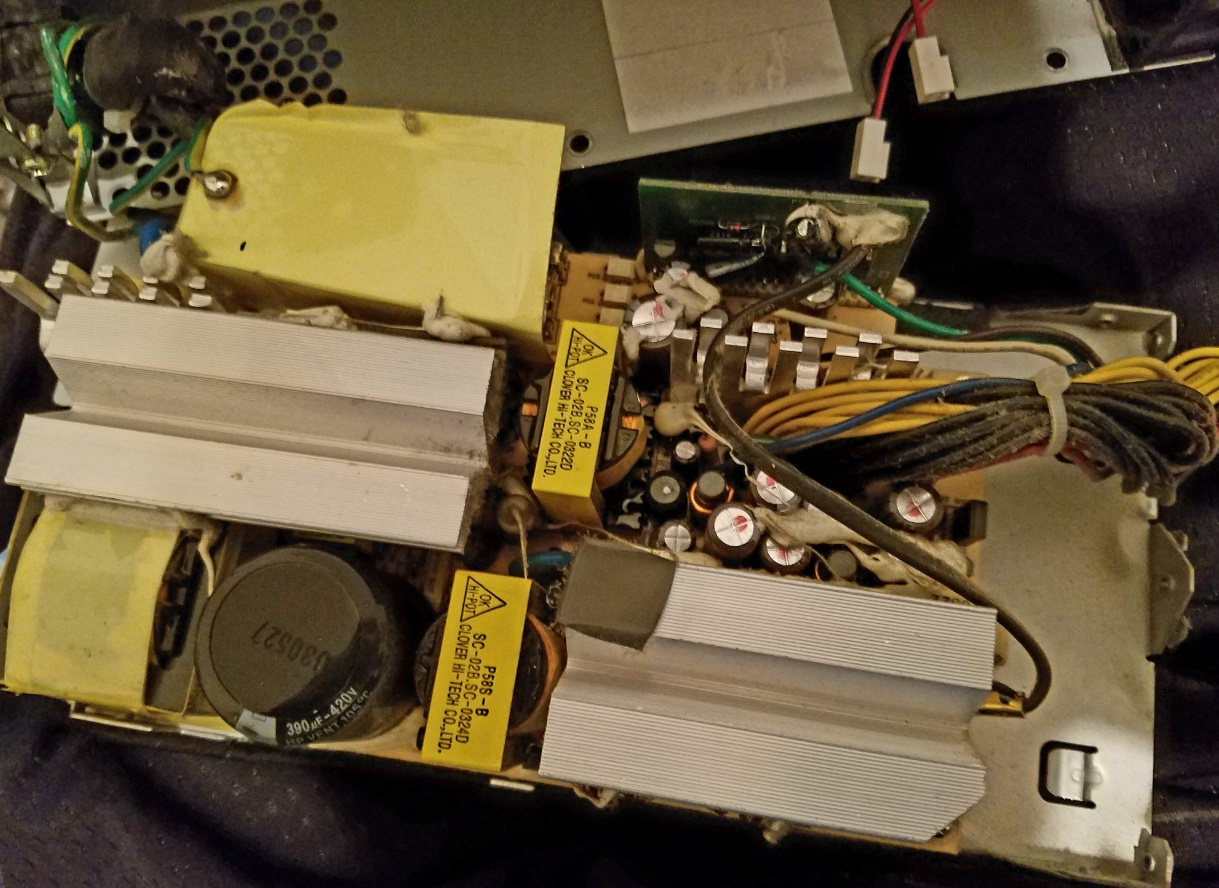 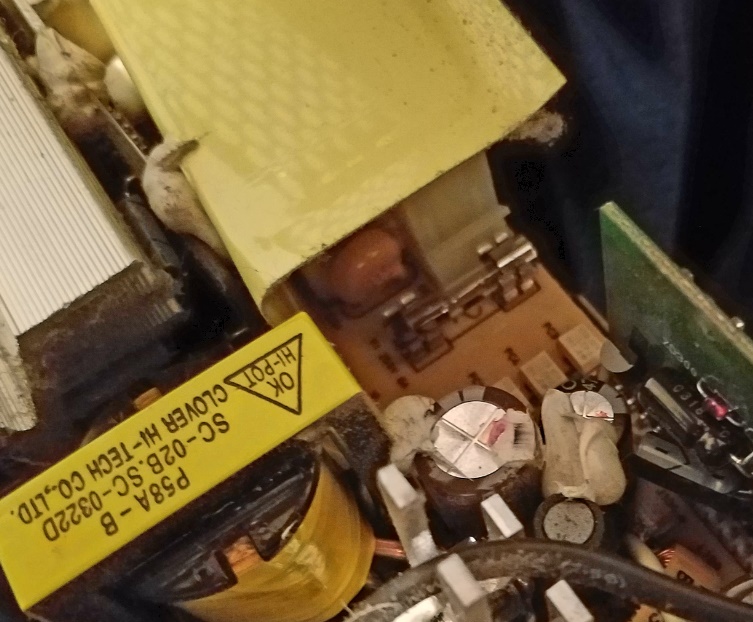 If the fuse doesn't look blown then that's probably ok at least. In which case it probably is just one or more caps have crapped out. I suggest you start simple and try to replace that big sucker in your first picture - bottom left, the 390uF 420v black cap, I believe that is a Crapxon HP. Apparently the HP series of crapxon's are the ones often found to be bad and if the PSu isn't outputting enough power, that may well be the cap that's responsible. If you can figure out a decent replacement for that capacitor you might luck out and find that's all that needs replacing (for now).

The problem is replacing them is often easier said than done as you need to do so with something fairly similar in specification, but getting replacements identical or very close to the original's spec isn't always possible (not just voltage and uF but ESR, ripple and impedance values matter too). Most caps generally have a ±20% tolerance though so as long as the replacement is within that it should work. At this point though it's probably best if you ask on a forum like badcaps (unless someone else here is more knowledgeable about capacitors) as I've pretty much exhausted my knowledge on the subject, added to which I've not worked on or even own the Samsung PSU so all my info comes second-hand from what I've read about it online.

Not looking blown and being good are not the same here, the fuse is easy to check normally with an ohmmeter but lacking that the fuse can still be checked using just a flashlight.
Just unscrew the back from the light, touch 1 end of the fuse to the exposed battery end now you need to touch the other end of the fuse to the flashlight case, I use pretty much whatever is at hand to complete this circuit, a paperclip works well, or a short piece of wire.
If the light comes on the fuse is good, and if it doesn't well, what does that tell you.
X

Or you could just take it out and look at it.

Xandros said:
Or you could just take it out and look at it.
Click to expand...

That might work if it has a glass tube, not so well with the very common ceramic bodied fuses. 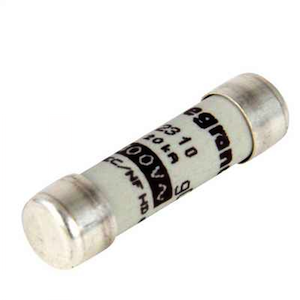 Yes, a glass tube. Much like the one in Xmsteel's PSU as shown in the second pic in post #11 I reckon.

Granted if your eyes aren't wonderful then a tester wouldn't go amiss even on one of the glass ones. Hmm, thinking about all this has reminded me of this image I had; http://imgur.com/a/nrUe6

Xandros said:
Yes, a glass tube. Much like the one in Xmsteel's PSU as shown in the second pic in post #11 I reckon.

Granted if your eyes aren't wonderful then a tester wouldn't go amiss even on one of the glass ones. Hmm, thinking about all this has reminded me of this image I had; http://imgur.com/a/nrUe6
Click to expand...

Then just as I stated, looking at it might work but not always, I've seen many glass fuses that were so blackened you could not see the link inside.
Even darker then those in the link you posted.
You must log in or register to reply here.
Share:
Facebook Twitter Reddit Email Share Link
Register on MacRumors! This sidebar will go away, and you'll see fewer ads.
Sign Up
Top Bottom