Got my August Smart Locks and Doorbell Cams!

I am looking forward to installing these, and will report back on how they work. 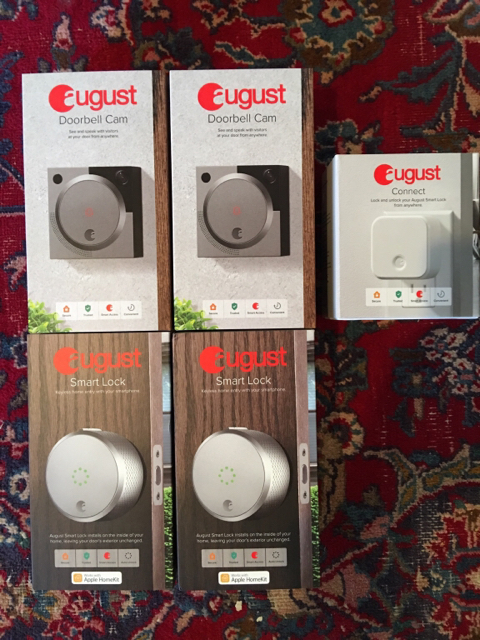 i was under the impression that HomeKit August lock doesn't need the Connect, as Apple TV will serve that function?
C

The Apple TV should allow you to work with the lock using Siri, but it won't allow you to use the August app remotely.
However, you shouldn't need that Connect if you've got just the two locks and two doorbell cams. The cameras function as a Connect as well.

chuyn said:
The Apple TV should allow you to work with the lock using Siri, but it won't allow you to use the August app remotely.
However, you shouldn't need that Connect if you've got just the two locks and two doorbell cams. The cameras function as a Connect as well.
Click to expand...

It took me a while to get the set up, primarily because I have an old house and the voltage from the doorbell transformers was insufficient. This ended up being a much larger project than I thought because of that. However, I finally have them up and running. I may do a video review and post it here.

So far, here are some thoughts:

The locks are functioning perfectly. They automatically unlock when I get several feet from the door.

As far as the automatic unlocking, the options are for the door to lock automatically between 1 to 5 minutes after the unlock. I wish there was an option to set it for longer than that. I have kids sometimes lag behind me as they play in the yard, but I would not want them to be locked out. At the same time, I don't want the door to remain unlocked for hours.

So far, the app on my iPhone 6 Plus is really burning up the battery. I've had about 22% of my daily battery being used by background activity on the app. I hope that reduces in the coming days!

I wish the smart keypads would come out already, as I could really use those.

As far as August connect, that is very much news to me that the doorbells themselves act as an August connect. So far, I've actually been unable to connect to them remotely. The cameras are stuck on "connecting" and I haven't been able to actually connect.

Do you think the doorbells serve as an August cannot only for the Lock they are specifically connected to on the same door? If so, it wouldn't cover everything because I do have the locks and doorbells split up -- not all paired together. Or do they allow remote connection to any devices in your home?
Last edited: May 7, 2016

And my doorbell cameras have worse "link quality" than they should. Not too far from router, coverage is fine. Yet the wifi is not good.
C

Thanks for the info. That's odd about the battery usage. I have the first gen locks and the app doesn't even register in battery usage stats.
I agree with the auto-lock, although I wish there was a way for it to know if the door was open or not. So then it can auto-lock after the door is closed.
As far as I've heard, it would be one doorbell per lock like how the Connect would operate. I'm still waiting for my locks to ship and hopefully a doorbell cam soon
M

Installed one on our front door today. Works well but was pain in the butt to get two users working. Once again I've turned to a 3rd party app to do what I wanted
C

So the August app wouldn't allow two users to access/use the doorbell cam? My wife and I are currently using separate accounts for our lock, and both are "home owners" and can control any of the lock settings like adding new ones or adding/removing guests. We'd like to get the camera soon so it'd be nice if we don't need to do too many workarounds.
K

Interesting to see this in use. I'm a bit torn on the locks. I really like that the August lock does the auto unlock/lock as you approach, and that it doesn't mess with the existing hardware, but it seems very pricey when you add in the August Connect for remote access and monitoring. Also, while it's great that you can set up guests and such, that won't do me much good for my non-smartphone owning in-laws when they come to feed the cat while we're on vacation or whatever. The keypad only increases the expense.

I'm half tempted to do the August lock for the side door to the house from the garage where the convenience of auto unlock is paramount, and something like the Schlage Sense for the main front door where a key code can be used for entry (at the expense of the auto-unlock not being there).

But then there's the dilemma of needing two apps to manage two different lock systems. It seems like the more smart home stuff I acquire, the further away I get from the vision of HomeKit as the "one stop shop" for my devices.