Graphics card on the way out?

I was playing StarCraft II tonight and at the end of a game I was on the score screen and my screen started flashing it's normal contents and black, except in horizontal chunks. They were thicker at the bottom and thinner at the top. I saw that my CPU was running rather hot (around 70 Celsius) but I've hit 85+ several times.

Does this sound like a failing GPU, or just a freak bug?

Keep an eye on it and see. Might just be a glitch, but could mean something is failing with the logic board or display. If it was overheating the machine would shut down so I wouldn't worry about that.

You can always run AHT (Apple Hardware Test) by restarting your computer and holding down D when powering on. This will give a quick test of the hardware in the machine.
W

AHT came up with nothing. Ugh.. here's to hoping that it doesn't fail one day out of warranty.
K

Sounds to me like it was just too hot. Try getting a laptop cooler fan pad to set the macbook on while in use. They are not very expensive and are a good idea.

I have experienced that kind of glitch with overheating on many occasions. You probably have no permanent damage.
W

I hate to be a necroposter but I wanted to let you guys know this happened two more times. I went into the Apple Store since I know this thing would eat dust two days out of warranty and they've ordered me a new logic board. I just took a picture of my MacBook derp'ing out on me and that was all it took to convince them. I'm kind of surprised since it passed their hardware test with flying colors, but who knows?

Apple released a software update just for this.. at least if you're running Snow Leopard. Go to Software Update and check for + download all the updates and try again, that should do the trick
W

Apple released a software update for failing GPU chips? All I saw was a driver update.

It showed up in my Software Update. In fact, it named Starcraft II as one of the most "buggy" games that aren't playing nice with the MacBook's graphics. 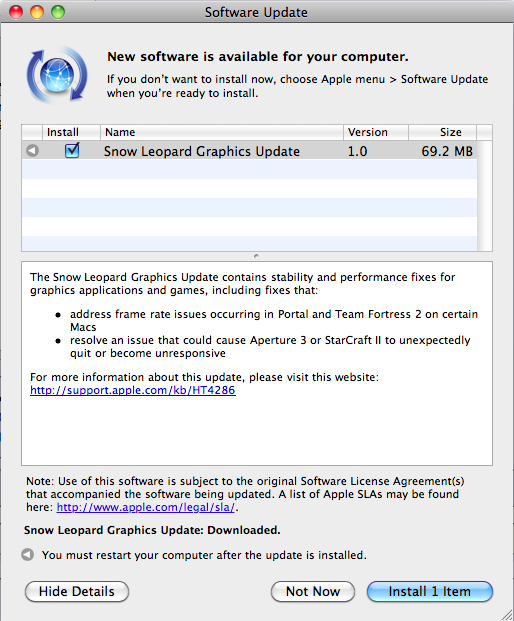 Those resolved performance issues with games and fixed bugs in graphical APIs. They can't do anything to stop my actual chip from malfunctioning.

wjlafrance said:
Those resolved performance issues with games and fixed bugs in graphical APIs. They can't do anything to stop my actual chip from malfunctioning.
Click to expand...

Agreed. Well, at least it seems you have the issue fixed. That graphics update, however, makes the gaming experience of SC2 ssssssoooooo much more enjoyable much better haha
W

Blondie :) said:
Agreed. Well, at least it seems you have the issue fixed. That graphics update, however, makes the gaming experience of SC2 ssssssoooooo much more enjoyable much better haha
Click to expand...

Agreed! I'm still using my current stuff with the graphics update until they get a new logic board in (they had to order one). It's great when my GPU doesn't go derping on me.
You must log in or register to reply here.
Share:
Facebook Twitter Reddit Email Link
Register on MacRumors! This sidebar will go away, and you'll see fewer ads.
Sign Up
Top Bottom