Griffin today launched an Indiegogo campaign for its upcoming Cove Recharging Center, a new charging management and device storage system designed to be used in the home. The Griffin Cove is able to store and charge up to five tablets, smartphones, or other electronic devices at one time in one compact location.

To develop its charging station, Griffin visited people in their homes to discover pain points with their current charging systems and used that data to design a product that people will want to use. Griffin's aim with the Cove was to develop a central hub that could accommodate the devices of the entire family, as one of the the most requested features was the ability to charge multiple devices at once.

The Cove has a neutral, modern design that's meant to fit in with a wide range of home decor styles, with a shell that features wood veneering at the top and wool lining on each of the three shelf layers. There are slots for charging five USB devices at once, and on the left, there's a box that contains all cables, cords, and power sources, keeping them organized and out of site. The entire box has a pull-down lid that keeps devices and cords alike hidden from view, and the front lid can also be used as a stand.

It has five 12-watt USB ports, so it can offer speedy charging for devices like the iPhone and the iPad. It includes a ChargeSensor circuit that detects what type of device is being plugged in, what power it needs, and whether it's an Apple device or an Android. That way it directs the right amount of power wherever it needs to go.

It measures 16.8 inches wide, 12.8 inches deep, and seven inches tall, so it will fit comfortably under shelves and cabinets when placed in an office or in the kitchen. The main power cord is six inches long, and it will ship with UK and EU plug adapters. 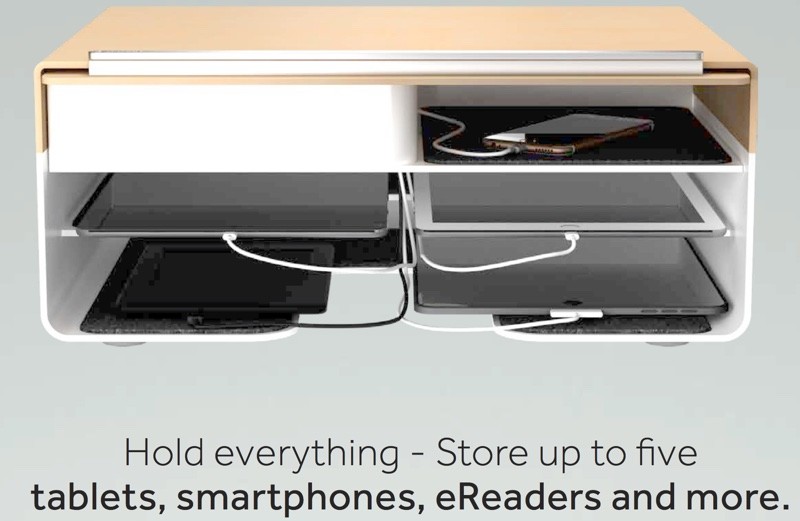 It's unusual for a well-established company like Griffin to launch a product on Indiegogo, and Griffin told MacRumors that the reason for the crowdfunding campaign is to allow the company to get immediate feedback from people on the design and function of the Cove. Since the data and research for the Cove came directly from consumers, Griffin thought that a crowdfunding campaign launch would make sense.

We think this platform will allow us to engage more closely with a smaller audience who might otherwise go unnoticed in the traditional retail model. We view Indiegogo as the shortest, straightest line between the need for a beautiful, design-sensitive charging hub and our idea for Cove.
Click to expand...

Griffin Cove is available for the next two days at the early bird price of $150, and after that, the price will go up to $200. The Griffin Cove will ship out to consumers in late 2015.

when i saw a headline i immediately thought of wireless charging, but this is just a glorified box with cables inside. Pass.
T

$200 for a "box" to store my devices + cables? just buy a $5 plastic box at walmart and flip it upside down and hey - all your stuff (incl. cables) will be hidden.

Anyone else find it odd when large companies use crowd funding?

The bread bin thing was the first thing that came to mind for me to. Plus very often you still need to use a device when it's charging and I'd say 90%+ are on people's night stands at night. Can see the point at all in this.
What foucus groups and research did they use???

indiegogo is their focus group. One that puts their money where their mouth is, so to speak. We'll see...

I'm pretty open to new ideas and concepts, but this one would be pretty pointless for me. I thought this would be inductive charging or something.
$200? No way.

I could drill holes and run cables through my nightstand for a similar (and much cheaper) version of this.
P

Way too big. Took up almost as much space as a microwave on that counter top.

I don't think I'd even submit an entry if MacRumors was giving it away for free (dare me, MacRumors).

Yeah ... this is pretty strange. I don't know why these devices have to be so expensive. The design looks pretty cheap on this one as well. The Griffin Multidock (http://griffintechnology.com/business/multidock) is way more elegant, although $600, even though it charges ten devices at once.

Is there any way to stop MacRumors from showing this junk on the mobile homepage?

It doesn't show up on the desktop home page, but on my phone it seems to show all stories no matter how worthless they are.
T

mack120 said:
The bread bin thing was the first thing that came to mind for me to. Plus very often you still need to use a device when it's charging and I'd say 90%+ are on people's night stands at night. Can see the point at all in this.
What foucus groups and research did they use???
Click to expand...

What home did these people go to to figure out to come up with this ridiculous contraption?

Design shows no elegance, space hog, ugly dust catcher.......stop me from going on.

Obviously their management isn't too confident about this product since they have to crowd fund it. I bet that's not even real wood.
J

Not a bad idea. I can see why they went the Indiegogo route from all the haters here. The only thing they should have done was have more Early adopters than just 36. It should have lasted the full 48 hours with no limit on total but just the buyer.

It sort of annoys me how the presenter at the start is reading the script from below the camera yet pretending to sound really enthusiastic about it. I guess she was only hired for the day and couldn't learn it, but its pretty short - maybe just get a few sentences per take without having to look down?

Griffin is crowdfunding? What!

That's kind of ridiculous. So is the price. And that door doesn't slide back so easily in the video.

Honestly, something like this but smaller that I could mount under my desk and slide out would be interesting. Or mounted under a cabinet.

If you are going to put it on the counter, some people might like an iPad or iPhone lightning dock port on the top. We like to sometimes charge and see/access a device.

Look what Pebble started a trend of! Griffin has plenty of money! They don't need crowd funding.
J

the woodgrain looks like the dashboard of an i3

My mistake. They are all 12W ports. Hopefully 5W devices can auto regulate.
S

It looks like you can't even put an iPad on the stand while it's charging -- or is there some way to snake the cable around to it? (Putting holes in that handle on the front for the cable to go through might make it possible.)

Anyway, I built my own simple under-cabinet shelf in my kitchen -- just a sheet of thin plywood mounted on four short wooden dowels that come down from the bottom of the cabinet. I painted the whole thing white. There's room for about 3 iPads on it. I put it right by an outlet, so I just hide the cables up around the rear dowels. The whole thing cost a couple dollars. And it doesn't take up counter space like this thing.
A

SnowLucas said:
Anyone else find it odd when large companies use crowd funding?
Click to expand...

Do you know of any alternative to this? I've been looking for exactly this type of item; and short of building on myself, I've come up empty. $200 seems a lot, but not when there is zero competition.
You must log in or register to reply here.
Share:
Facebook Twitter Reddit Email Share Link
Register on MacRumors! This sidebar will go away, and you'll see fewer ads.
Sign Up
Top Bottom