Had It With the Dropbox App? Here Are Five Alternative Dropbox Clients

The Dropbox app has a troubled reputation among Mac users. The client is often called out for using significant system resources, even when it's not doing anything in the background. And when it does lurch into action, syncing with Dropbox's servers can sometimes be painfully slow, for no obvious reason.

Added to this is the fact that almost a year after the first Macs with the M1 chip became available, Dropbox still doesn't natively support Apple silicon, and won't until sometime in 2022. That means M1 Mac owners must use Dropbox with Rosetta, and reports suggest the client hemorrhages MacBook battery life and uses a disproportionate amount of memory on Apple silicon Macs.

If you've had your share of frustrations with the Dropbox app, you can always switch to another rival cloud storage service like iCloud, or you can try one of the following alternative Mac clients to sync with your existing Dropbox account. 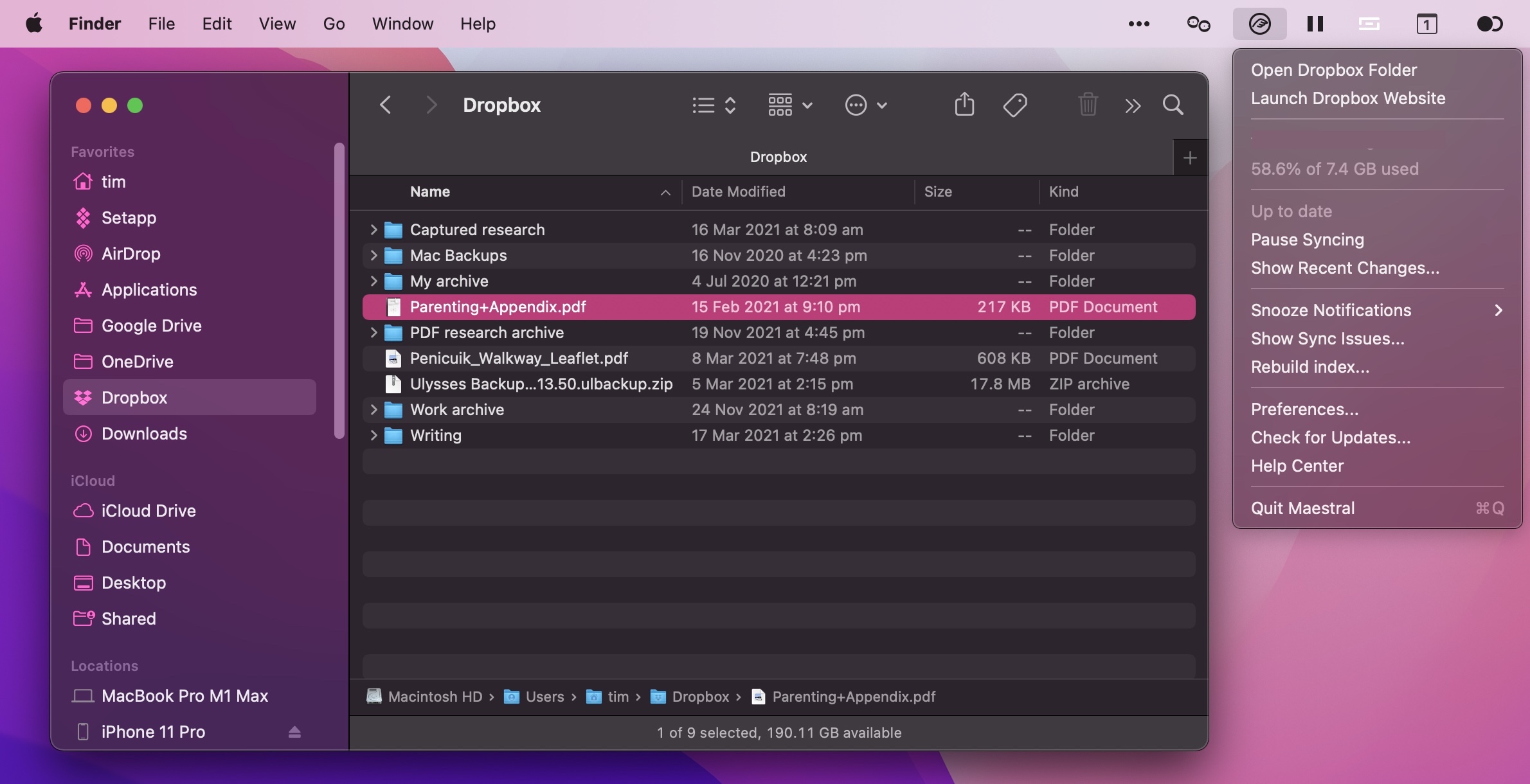 Maestral is a popular open-source Dropbox client for Mac that's free to use and has a significantly smaller resource footprint than the Dropbox app (40MB versus 420MB). The lightweight client happily syncs files and folders in the background, and won't bring your Mac to a standstill in the process. It also natively supports Apple silicon. The caveats are that it doesn't support Dropbox Paper, shared folder settings, or the transfer of only those parts of a file which have changed ("binary diff"). 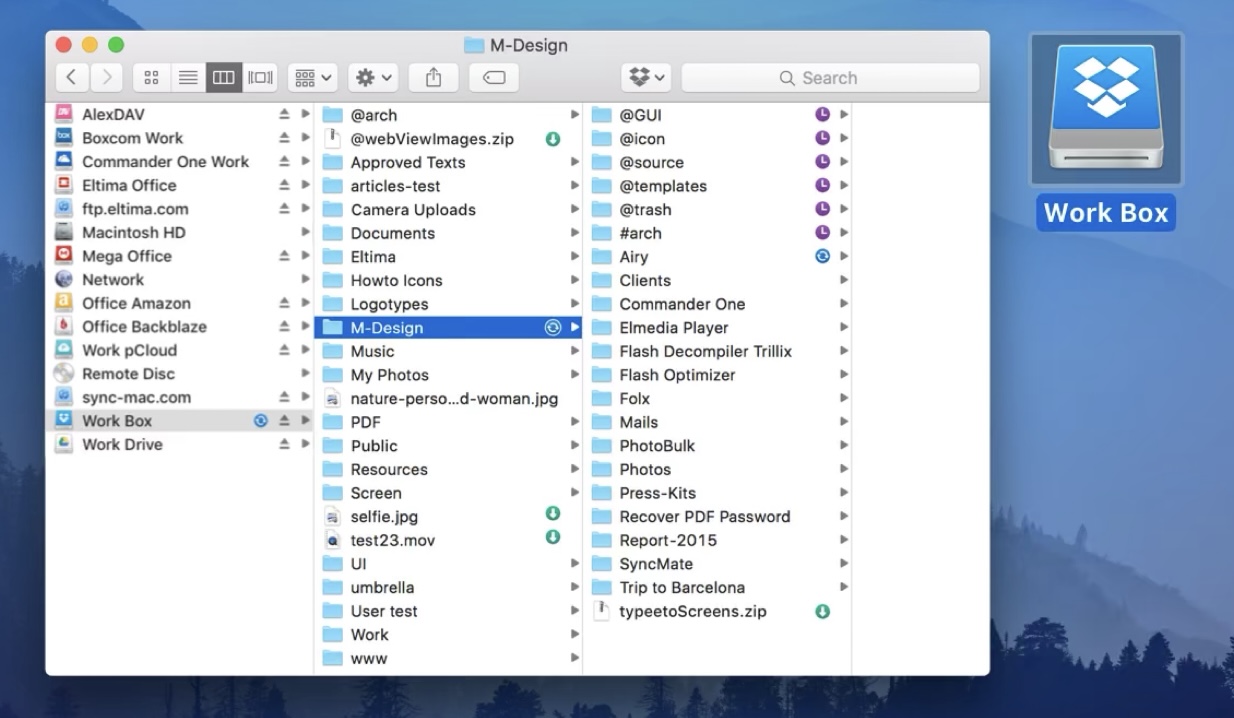 CloudMounter connects cloud storage accounts like Dropbox and Google Drive to your Mac's Finder, allowing you to treat them like regular, local drives. You can search, drag, drop, and access your files, and it doesn't automatically synchronize them to your local drive, which is great if you need access to files on Dropbox's servers but are low on storage space. It encrypts your files to ensure their safety, and you can also share any file or folder by copying its Dropbox link to the clipboard via a contextual menu option.

Like CloudMounter, Mountain Duck integrates with Finder to turn it into a fully-functional SFTP client, allowing you to access your Dropbox (or other cloud storage service) account as if it was a local drive. You can choose to keep individual files offline on your local disk, and it displays which files are in sync with little icons. Client-side encryption is included, and it also has a contextual menu to keep sync and URL copying options at your fingertips. 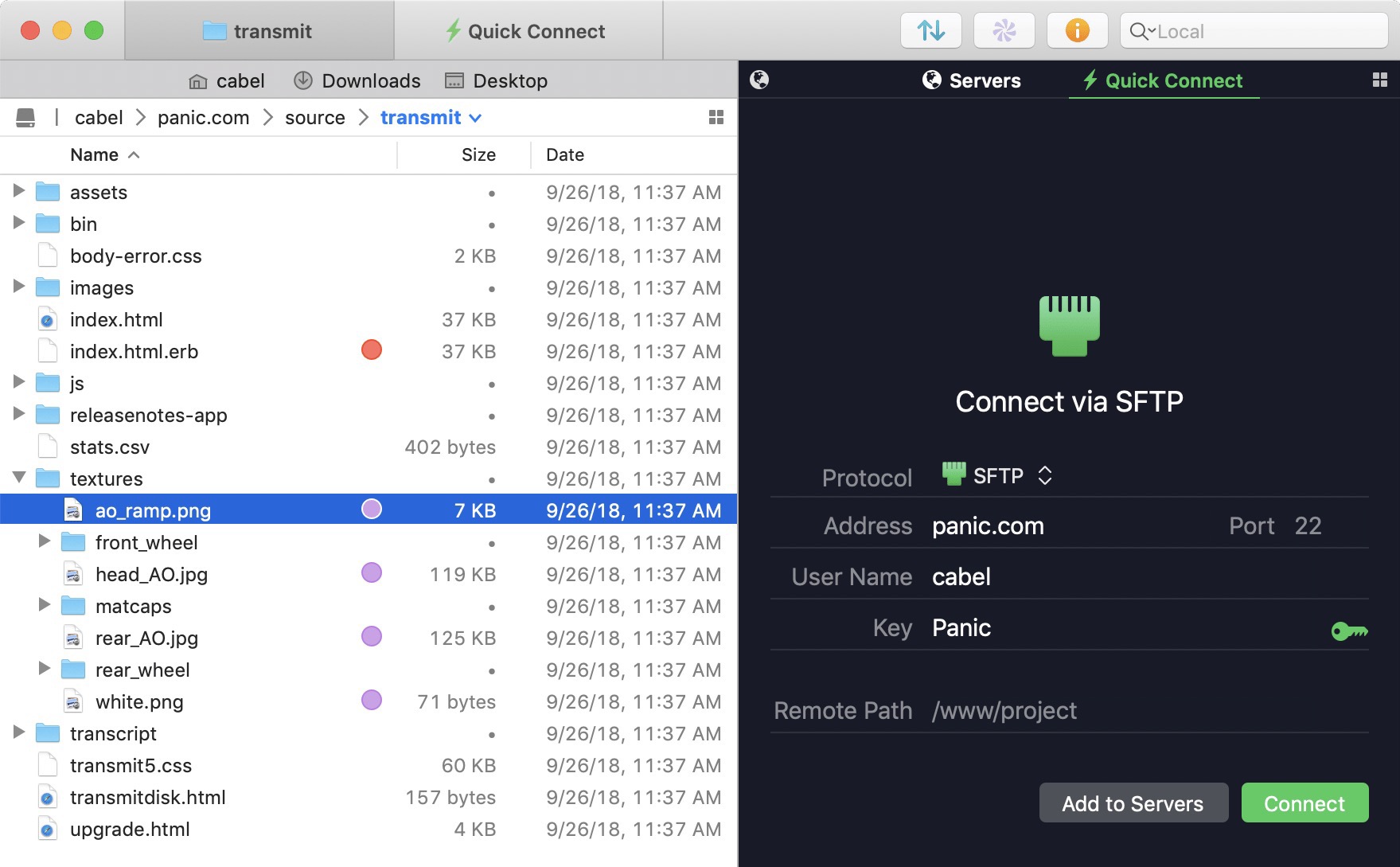 Long-running file transfer app Transmit used to be referred to as an FTP client, but these days it can also connect to 11 different cloud services, Dropbox being one of them, which is why we've included it here. While it's not a straight up Dropbox client replacement (it doesn't sync files in the background) its dual-pane interface is faster than Finder, which makes it good if you upload and download files regularly. It also has useful features like File Sync, which can mirror remote and local files in one click. 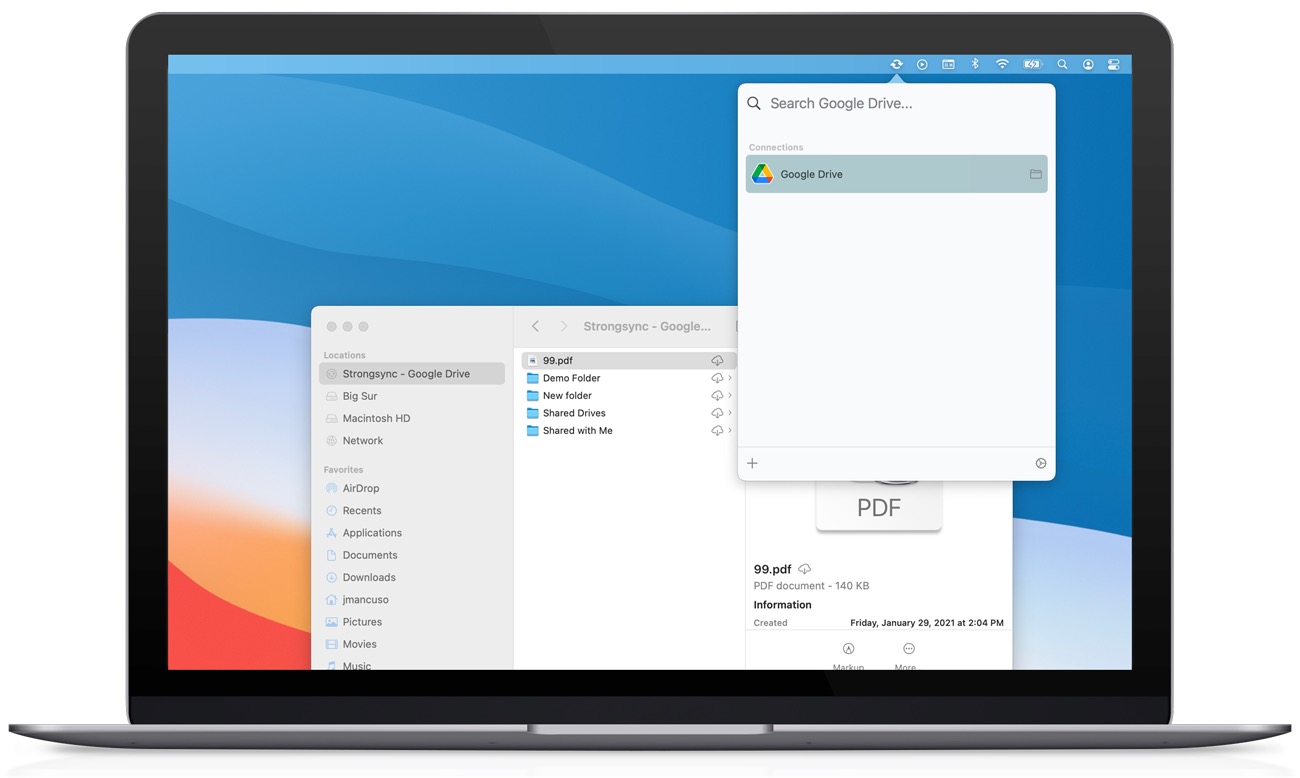 Strongsync is another client that lets you mount cloud storage accounts on your Mac as if they were local disks. Files get downloaded transparently when another app requests them or when you request them in Finder. Amongst other clouds, it supports Dropbox and Dropbox for Business. There's no kernel extension or reboots needed, it offers full library search, and its SwiftUI 2 interface natively supports both Apple silicon and Intel Macs.

Know of any other Mac clients that support Dropbox integration and have proved useful to you? Let us know in the comments.

Article Link: Had It With the Dropbox App? Here Are Five Alternative Dropbox Clients

I moved to iCloud after about a decade on Dropbox. Couldn’t be happier!
Reactions: Matz, BuddyTronic, MacRumorUser78 and 20 others

Same here. Sharing of folders finally allowed me to make that move. I know its not for everyone, but so nice not having to rely on dropbox.
Reactions: artfossil and calstanford
M

Why not just set up a self-hosted NextCloud instance like a normal person?
Reactions: parasight, lionel77, SigEp265 and 6 others
C

The client I use after finishing my dropbox yearly is called iCloud.

Same price. Better integration. No ******** company that doesn't care about it's customers "M1 Mac is not a thing"
Reactions: drumcat, artfossil and Billrey
A

I just completed the same migration. Everything is in my iCloud as of last weekend. My Dropbox family license will not be renewed on the 24th of December.

Dropbox used to be great. But the family license is quite expensive and the client (both Mac and Windows) started to have a noticeable effect on system performance several years ago. To win me back, Dropbox would need to make a good client again, and they would have to lower the price of the family package to the level of a professional license. That is expensive enough as it is. But perhaps I still wouldn't move as iCloud seems to cover my current needs anyway.
Reactions: calstanford

Does any of these clients support the ‘Offline Only’ Sync feature?
M

I removed dropbox from every device.
On Mac it is always running over a dozen processes and they won't update for M1.
On iPad and iPhone, even with background refresh off, it will randomly decide to run in the background for hours on end and they never seem to fix it.
iCloud Drive seems to be much slower than dropbox for file downloads/uploads but I'll sacrifice the speed for reliability.
Reactions: Chaos215bar2, calstanford and noblesoul117
R

I think Dropbox is bad, but other those third party tools are worse when you want real hard job done. Any cloud can manage 10.000 files. Problems happens when you have it tens of thousands, even iCloud Drive.
Reactions: inequals, Spectrum, luckman212 and 14 others

Often confused why people would pay for Dropbox. You get 5 x 1TB accounts and the full MS Office suite with Office 365 for £3.33 a month with a retail card, or you can pay £7.99 a month for 2TB on Dropbox.
Reactions: mikeyhd, sideshowuniqueuser, drumcat and 8 others
R

GaymerAdam said:
Often confused why people would pay for Dropbox. You get 5 x 1TB accounts and the full MS Office suite with Office 365 for £3.33 a month with a retail card, or you can pay £7.99 a month for 2TB on Dropbox.
Click to expand...

Dropbox has some Pro advantages over OneDrive. For example, roll-back until a month at folder level and file versioning. And works better under macOS than OneDrive (difficult but true). One of my friends even pays extra to have one year versioning and restoring back, for example.

Said that, each one has to evaluate their one requirements. For example, I use the 6 x 1 TB of OneDrive for my NAS backup.
Reactions: nebojsak, tibor96, szw-mapple fan and 2 others

Surprised to not see pCloud on the list, with lifetime subscriptions of up to 1TB of permanent cloud storage for a single price.
Reactions: Lioness~ and GtrDude

Honest question, why multi million corporates create an app that is so bad and refuse to fix it meanwhile an open source free app make a better job at it?
Reactions: drumcat and amartinez1660

Same, decided this month after realising I need more iCloud storage anyway I might as well cancel Dropbox as it's app was running about 20 processes on my M1 Mac. There's not really anything I miss in iCloud Drive apart from maybe the ability to stop files downloading to all Macs BEFORE they've downloaded (oh and LAN sync would be handy)
Reactions: jimthing
P

calstanford said:
The client I use after finishing my dropbox yearly is called iCloud.

Same price. Better integration. No ******** company that doesn't care about it's customers "M1 Mac is not a thing"
Click to expand...

Marlor said:
Why not just set up a self-hosted NextCloud instance like a normal person?
Click to expand...

Or go to OneDrive or iCloud Drive and get rid of the headache
Reactions: SigEp265 and TheDailyApple

I just use iCloud Drive. Super easy to get my recorded clips from my desktop to my iPad for editing (ShadowPlay).
I

alexqndr said:
Does any of these clients support the ‘Offline Only’ Sync feature?
Click to expand...

Mountain Duck does, but others probably too.

Cyberduck for mounting volumes in the file explorer. Available for Mac and Windows.

I've been using DropBox for eons to sync about 800K files between three machines and had all of these issues. Sometimes I'd have to switch DropBox off if I was doing things that touched a huge number of files at a time.

A few months ago I finally bought a Synology NAS and have been using Synology Drive as a DropBox replacement. It's definitely a little less turn-key to setup, but my experience has been pretty smooth transitioning and it's a lot less of a resource hog. I find myself not thinking about sync processes anymore at all, and I have more storage on tap now for cold data in another volume.

A lot more money up front, but I'm out of the monthly/yearly subscription fee thing at least until I need a hardware upgrade.

You lack the off-site nature of stuff stored up in the cloud if you're relying on that dimension of things for backups, but that may be a positive depending on your outlook these days. I may just be getting old and curmudgeonly, but I'm swinging back towards that paranoid notion of liking my data inside my own four walls.
Reactions: RealityM, Hap67, lexvo and 1 other person
M

People comparing dropbox to onedrive to icloud are probably not using any dropbox features. It syncs faster than others, advanced sharing is super-easy, even with people outside of your family/company and backup/restore/versioning is unparalleled. If you don't need those features, then yes, you can switch to whatever is cheap. The client sucks (it will of course be apple silicon native at some point), but so does onedrive, google drive, and icloud isn't that much better because it is too dumb and you have zero control.
Reactions: roncron, frappedia, jimthing and 7 others

I use icloud for my photos, but I use google drive for my 150gb music library. I like it because it syncs automatically so I don't have to worry about it. Although, I notice it does get hung up on syncing the music library file sometimes.
P

Macropanda said:
iCloud Drive seems to be much slower than dropbox for file downloads/uploads
Click to expand...

I hate this about iCloud.

I move a tiny file from my Macbook to the cloud and it might not be visible by Files on my iPhone for, literally, hours!

That's right. It can take multiple time units of 3600 seconds each for just a few thousand bytes to move from my laptop through "the cloud" to my phone.

And there doesn't seem to be any way to force the update to occur any faster than mañana.

Wasn't the impetus for Dropbox exactly that? Quoting Wikipedia: "Dropbox founder Drew Houston conceived the Dropbox concept after repeatedly forgetting his USB flash drive while he was a student" https://en.wikipedia.org/wiki/Dropbox#History