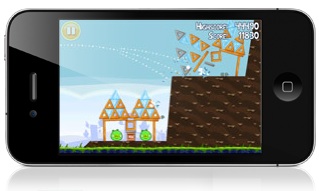 Industry Gamers reports on the results of a new survey from market research firm Interpret revealing that users of handheld games are increasingly moving away from dedicated devices such as the Nintendo DS and Sony PSP in favor of smartphones such as the iPhone.

The report, "The Phone Gaming Revolution: Do the DS and PSP Stand a Chance?," found that 43.8% of the phone/DS/PSP gaming market plays games on phones, which represents a significant 53.2% increase over the past year. At the same time, Interpret says that the proportion of those who play on the DS or PSP has fallen by 13%.
Click to expand...

But while that data could indicate that the market for handheld gaming is simply expanding with the increasing capabilities of phones, other data shows that users of dedicated gaming devices are in fact abandoning those devices in favor of their phones.

The company notes, "Gamers appear to be defecting from their handheld gaming devices to phones to get their gaming kicks: a full 27.2% of consumers who indicate that they play games on their phones only (and not on the DS/PSP) actually own a DS or PSP, but do not actively use the device(s)."
Click to expand...

With existing dedicated gaming devices being forsaken in favor of all-in-one smartphone devices, some analysts are questioning whether dedicated devices have a significant role in the future portable gaming market. Sony at least appears to be responding to the threat with a "PlayStation Phone" of its own that appears to be an Android-based device offering many of the features of a smartphone while also including hardware buttons akin to those found on traditional handheld gaming devices.

I predict in 5 years portable gaming will only be on smartphones, iPads and iPod touches, but not on an iTouch.
Comment

I hate that level!!!
But agree, see ya later PSP!
Comment
I

anyone with school-aged children could have told you this.

my iphone 3GS has better hardware than a PSP. nintendo is like atari in terms of hardware

only thing is that the games are not as good as a PSP, but at less than $5 a game who cares? it's crazy that they charge $50 for handheld games on the PSP
Comment

I know the game selection (and profitability for developers) is much better on iPhone/iPod/iPad than Android, but have we seen gamer stats on how many games people buy, and how much they play, on iPhone/iPod/iPad vs. Android? (And even other phone OS’s for that matter.)

I’d be curious—for games specifically, not all apps. In other words, when gamers are moving to “phones,” does that mostly mean (by hours or dollars) moving to iOS? Or a mix of many platforms?
Comment

Given that I haven't turned on my Nintendo DS Lite in 8 months, I agree with the article.
Comment
S

We'll see about that after the 3DS is released. DS is basically over 6 years old already, so that might have something to do with the stats...

I do play some casual games on my iPhone but the controls are simply annoying in many cases and fingers obstruct the playing.
Comment
F

The touch-screen makes a horrible interface for a lot of game styles. It's great for the most casual kind of games, which is what you mostly find on the iPhone.
Comment

HLdan said:
I predict in 5 years portable gaming will only be on smartphones, iPads and iPod touches, but not on an iTouch.
Click to expand...

agreed dan... mobility/portability is the future.... but who has time to play games?

It's a shame - I don't care what you guy say but angry birds or cut the rope have nothing on real portable games.

I loved my Nintendo ds and less the psp but u can't beat the convenience of iPhone games.

Angry Birds is a fun diversion when I'm stuck in line.

Now I'd like to see some deeper gaming experiences. Where's the true Animal Crossing (etc.) equivalent? (Please don't say Astro Ranch.) And why is there no Scribblenauts for iOS???
Comment

One thing to note is that both DS and PSP are at the end of their life cycles and next to obsolete now whereas the (multi) touchscreen gaming is a completely new experience. Though some would argue that the lack of controls makes iOS a non console, and while it might be true for some traditional genres, the touch screen controls have given birth to a lot of new gameplays and it still works fine enough with on screen buttons too (admittedly not as great as real buttons). And the fact that appstore has made it incredibly cheap and easy to get great games at a bargain is also a major plus.


Will be interesting to see if (or how much) things change when 3DS and PSP2 show up next year.

all the kids have phones now so of course they will play games on them. phones arent replacing gaming devices because the kids do not have them to begin with. when i went through grade school cell phone were rarer but also werent allowed in classrooms. game devices have never been allowed and still arent allowed.

kids like games, this is a fact. when they are bored they resort to the only gaming device available to them, their phone in hand.

to suggest that phones are replacing handhelds is like saying car stereos are replacing home systems. ill wager more people listen to their car stereos than at home and why? when driving thats the only thing available to you which wont cause you to hit a tree. inside your home? theres a number of things to distract you but that doesnt mean you prefer your car stereo over your homes.
Comment

It's a shame - I don't care what you guy say but angry birds or cut the rope have nothing on real portable games.

I loved my Nintendo ds and less the psp but u can't beat the convenience of iPhone games.

Its laughable really to think that these trivial games will lead to the downfall to great handheld games from Nintendo and Sony
Click to expand...

I'm not saying this is what you mean (as in, this is more of an add-on than a direct response to anything you've said or may be implying) but it's not so much that they're trivial, it's that they're different. Games like Osmos, Fruit Ninja and Angry Birds are attracting people that would likely never own a PSP or DS in the first place.
On top of that, I've never owned a "portable" version of Madden so I can't compare, but Madden 11 on the iPad is pretty good, NHL 2K11 on the iPhone is good as well. Again, the last portable gaming system I owned was a Gameboy color (just don't see a point in owning a PSP, for me at least) so I may be off-base, but I think that with games like that Epic Citadel thing and that Rage-based one coming out in the near future, the iOS platform will be offering some "real" portable games as well in the future, not just "trivial" ones.

... yet! In terms of running a business, if Nintendo is losing money and starts to see their sales go down as a result of iOS, they might consider releasing games for it. They've fought battles against other consoles so many times without cross-platforming any of their games so it's probably a stretch, but definitely not impossible.
Somewhat unrelated, but if Apple ends up making $40 million with their iWork apps for the iPad (early estimates), why wouldn't Msft release Word, etc for it? Sure there may be some benefit to keeping it exclusive but if Apple is making that much with productivity sweet, imagine what Msft would get?!!? Similarly, I would imagine there is a lot of money to be made releasing high-profile games on the iOS platform, even if it means losing some exclusivity.
Last edited: Dec 8, 2010
Comment
L

Used to pack my DS and PSP to play games when I would go to places where I had to wait in line like the DMV and in doctor's waiting rooms.

Now I just use my iPhone.

Granted, DS and PSP games are far superior to iPhone games, but I now just play them when I am home and usually when I'm home, I'd rather play my 360 and PS3.
Comment
B

On an island in Maine

iOrlando said:
anyone with school-aged children could have told you this.
Also a $50 iTunes gift card goes a long way with iOS games.
Click to expand...

Actually, any parent of Elementary School children can tell you that the DS is in no danger of going away any time soon. Go to any after school event and you will see a bunch of kids on DS's with groups of kids huddled around them. If it's not a DS, it's an iPod touch. When they get older, they go for the smartphones, but when your kid tells you that "every kid" has a DS, they aren't kidding these days. A lot of it probably comes down to parents. Not all parents are going to stick a cell phone in their elementary school kids hands, but most will buy a $1-200 "gaming" device.

Whether the DS stays relevant in the future will depend on Nintendo and how they can compete with the changing market. As for the PSP, only the uncool kids have them. Sony missed the handheld bandwagon by a long shot and the PSP Phone just looks like a last ditch effort to try to save themselves.
Comment

All this tells me, like the Wii's success, is that they're a lot more casual gamers than hardcore/long term/whatever other descriptor you want to use.

I love Angry Birds and Plants vs Zombies but without buttons and controls the games will be very limited. That doesn't mean they won't sell a bajillion copies of Bejeweled 15 of course but to each their own.
Comment

reactions said:
Its laughable really to think that these trivial games will lead to the downfall to great handheld games from Nintendo and Sony
Click to expand...

Look what the Wii did to gaming, and then re-read your statement.
Comment


fxtech said:
The touch-screen makes a horrible interface for a lot of game styles. It's great for the most casual kind of games, which is what you mostly find on the iPhone.
Click to expand...

I keep hearing the term "casual gaming" in the derogatory regarding iOS, but I have no idea what it actually means. What defines a "casual" game exactly? Is StarCraft a "casual" game? Because it sure would work well on the iPad.
Comment

reactions said:
Its laughable really to think that these trivial games will lead to the downfall to great handheld games from Nintendo and Sony
Click to expand...

Look what the Wii did to gaming, and then re-read your statement.
Click to expand...

Why wii did nothing to help 3rd party developers.

If anyone who owned a ds knows they already have all these simple games (ie most iphone games) built into games like wario ware, Mario party, etc.