In iOS 11, Siri has a new feature that lets you ask the personal assistant to translate English into one of several different languages. We already did a Siri overview video showing off Siri's new capabilities, but we thought we'd take a closer look at translate, which can come in handy when you're traveling.


Subscribe to the MacRumors YouTube channel for more videos.​
Translate works as expected -- ask Siri how to say something in another language, and Siri does it. For example, you might say "Translate 'Where's the bathroom' to Spanish," or "How do I say 'I am a vegetarian' in Chinese?"

When translating, Siri speaks the translation aloud, so whomever you're speaking to can hear what you have to say directly in their language. There's also a button for quickly repeating the spoken translation.

Siri can translate English to Mandarin, French, German, Italian, and Spanish, but not the other way around. Apple says there are plans to expand the feature to include additional languages in the coming months.

As you might have noticed, Siri's new translating abilities are accompanied by a more natural, human sounding voice with better pronunciation and inflection. Siri's also much smarter in iOS 11, thanks to new on-device learning functionality and cross-device syncing. Siri can also make suggestions based on your browsing habits, and it knows more about music.

For details on Siri's new capabilities and all of the other features in iOS 11, make sure to check out our iOS 11 roundup.

Siri, do a translo on this gabber from blighty to frog.

fitshaced said:
Siri, do a translo on this gabber from blighty to frog.

Hard to believe that this will work well considering how awful siri is.
Reactions: MacAddict1978, TheHateMachine, Ballis and 2 others

ILuvEggplant said:
Hard to believe that this will work well considering how awful siri is.
Click to expand...

I'm guessing you haven't used it in a while.

I use siri (well, voice dictation ... same difference for these purposes) for any text messages I send when:
Yeah, I'll have to occasionally correct a word or two, but as long as I don't go out of my way to speak like I have mouth full of marbles, it usually works pretty well. Certainly a lot faster than tapping out a long message.
Reactions: mariana888, PR1985, makr and 4 others
R

Is Macrumors sponsored by Project Fi?...every iOS beta video has been with a iPhone 7 being used on Project Fi(which seems random since it seems it has some "quirks" on the iPhone)

...which means that all over the world, fat American tourists will be yelling at Siri on their phones, then shoving them into the faces of locals: "DID YOU GET THAT?? I. NEED. A. BATH. ROOM."

Much better than trying to actually learn the language.

Does it do Japanese? The wife and I are eventually gonna do an anniversary trip to Japan and that would be super helpful.
S

eoblaed said:
I'm guessing you haven't used it in a while.
Click to expand...

And I'm guessing you have a perfectly standard English/American accent. While I agree with you Siri works fine for me, my Aussie wife relies on it a lot for dictating texts which turns into her refraining from throwing the phone out the car window after every use.
Reactions: Yakibomb and V.K.

Hoping they add Japanese to this soon as well. The Google Translate app is horrendous. It gets the words wrong more often than right, so if this is more accurate it will be a massive step forward. I like the fact that it also shows the romanised reading of the kanji. That's something siri doesn't do now when you ask it to translate a word.

Very much like the program iTranslate. That program was fun when I got it but it turns out it's not very useful for me. Having it built in will be nice.
Reactions: Avieshek
T

I'm curious why you need to showcase not only what the video is about but your apple watch, airpods and the charging case for the airpods. Why not just focus on what you're trying to convey. We get it, you like apple stuff.
I

What really would be cool is this:

Hey, Siri, please interpret a conversation between English and Spanish for me.

Then you and who you are speaking can say whatever you want in English and Spanish, pause, and let Siri translate that on the fly for each sentence.

Then "Hey, Siri, stop interpreting." to stop.
Reactions: Bacillus, eastmanweb, jef82 and 9 others

So there is such a thing as "Singaporean English"! 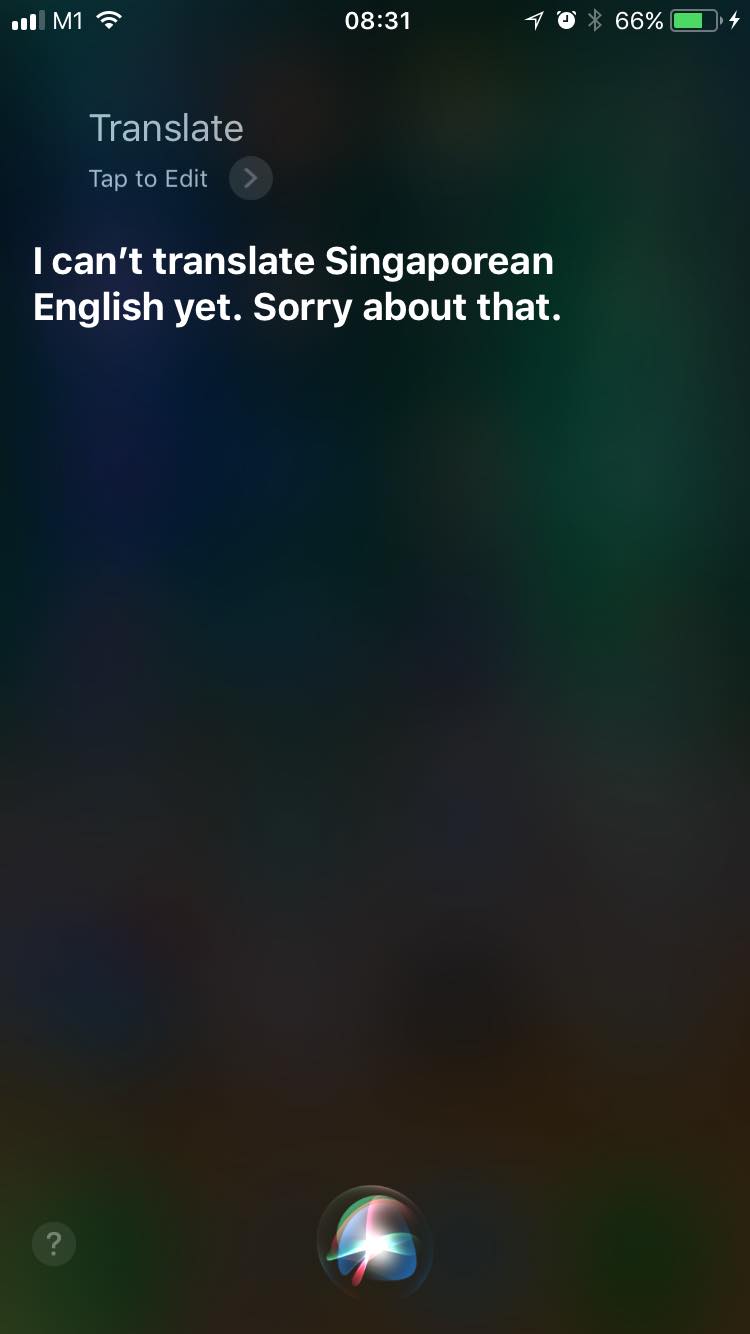 Szarky said:
And I'm guessing you have a perfectly standard English/American accent. While I agree with you Siri works fine for me, my Aussie wife relies on it a lot for dictating texts which turns into her refraining from throwing the phone out the car window after every use.
Click to expand...

It's true, I have a standard American accent.

Does your wife have Siri set to an Aussie voice? My understanding is that the voice you choose for siri isn't just for listening aesthetics, but also instructs siri on what sort of accent to listen for.
Reactions: jef82 and Avieshek

jzachlee said:
So there is such a thing as "Singaporean English"!
Click to expand...

I can't translate Singaporean English yet lah. I'm sorry about that lah.

"You are learning it though Siri, Is it?"

Pretty awesome that we can do this, but I am more impressed with the translate google app that you just point at something and it auto translate it 'live', augmented reality used correctly.
Reactions: The Barron and tphalp
D

firewire9000 said:
Damn is that even English?
Click to expand...

I'm American, but here's my translation for you.

Aussie Bloke: Siri, can you translate on this phone from Aussie to French?

Siri: I'm sorry I can not yet translate Australian English.

Floris said:
Pretty awesome that we can do this, but I am more impressed with the translate google app that you just point at something and it auto translate it 'live', augmented reality used correctly.
Click to expand...

Fantastic in a taxi, until you forget a pen or the guy doesn't write in block capitals. It's really apples and oranges.
S

I'll be incredibly amazed if it can interpret Singlish.

nicho said:
Fantastic in a taxi, until you forget a pen or the guy doesn't write in block capitals. It's really apples and oranges.
Click to expand...

So I have very little hope on having this work outside in the busy streets where you play tourist.
I rather point it at a sign that says "this is a taxi spot" and i dont have to ask someone where if this is where i wait for the bus or can find a cab .. (random example).
Reactions: precogincog and Bacillus
You must log in or register to reply here.
Share:
Facebook Twitter Reddit Email Link
Register on MacRumors! This sidebar will go away, and you'll see fewer ads.
Sign Up
Top Bottom