Today is April 1, 2017, otherwise known as April Fools' Day, and as you are likely aware that means over the next few hours you should be highly wary of anything you see, read, or hear online. As MacRumors has covered over the past few years, tech companies love to prank their customers with silly products, out-there announcements, and largely weird press releases meant to highlight the jovial holiday.

April 1, 2017 also marks the 41st anniversary of Apple, with Steve Jobs, Steve Wozniak, and Ronald Wayne having solidified their partnership on this day all those years ago in 1976. Now, Apple itself has become a major target for April Fools' Day pranks, as well as various other companies, apps, services, and accessory makers that are well-known by Apple users.

We have collected some of the more interesting hoaxes and jokes into a list below, but remember that some contain mildly NSFW content and language, so you may want to use headphones or watch the videos in a private location.

Siri is recognizing April Fools' Day in some of its responses today, including refusing to flip a coin upon request.

iFixit has announced an all-new toolkit that it says is aimed at the smallest devices on the market, including the Apple Watch and AirPods. The $19.95 Micro Tech Toolkit comes with a magnetized driver handle, easy-to-open tool roll, micro pliers, micro spudger, an iFixit micro opening tool, and three precision bits.


Thanks to the vast array of tools being sold on iFixit's online store, the Micro Tech Toolkit is at first a somewhat believable offering from the teardown site. For anyone not yet convinced of its status as an April Fools' Day prank, however, the accompanying launch video has testimony from iFixit's Micro Tech Tool Expert -- Howard the Hamster. Additionally, one repair story on the toolkit's storefront written by Ralph the Mouse appears to be a reference to Beverly Cleary's popular children's book The Mouse and the Motorcycle.

Beginning yesterday, users discovered that Google has added a functioning version of the classic video game Ms. Pac-Man directly into its iOS Google Maps app. You can now control Ms. Pac-Man and hunt for ghosts and pellets in a re-skin of the game that turns the streets of your local neighborhood into a maze of Ms. Pac-Man corridors. 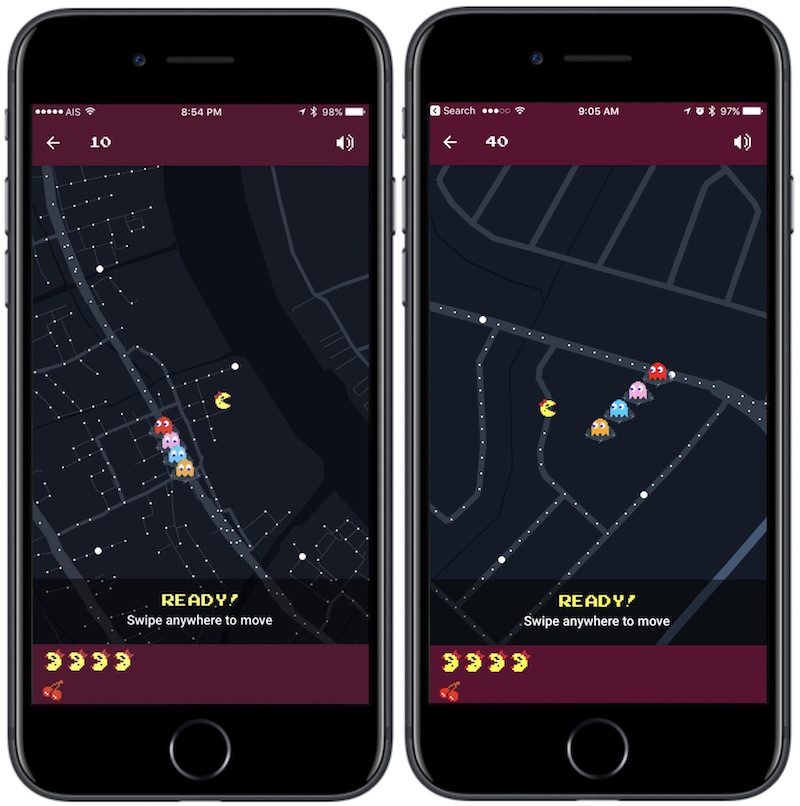 Netflix launched an all-new streaming show it's calling "Netflix Live," allowing customers to receive fascinating tidbits of information about copiers, toasters, and pencil sharpeners from actor Will Arnett. The popular streaming company claims that the "live" show is a new addition to its ever-growing stable of original content, but -- as many have figured out since yesterday -- it's yet another one of Netflix's April Fools' Day pranks. 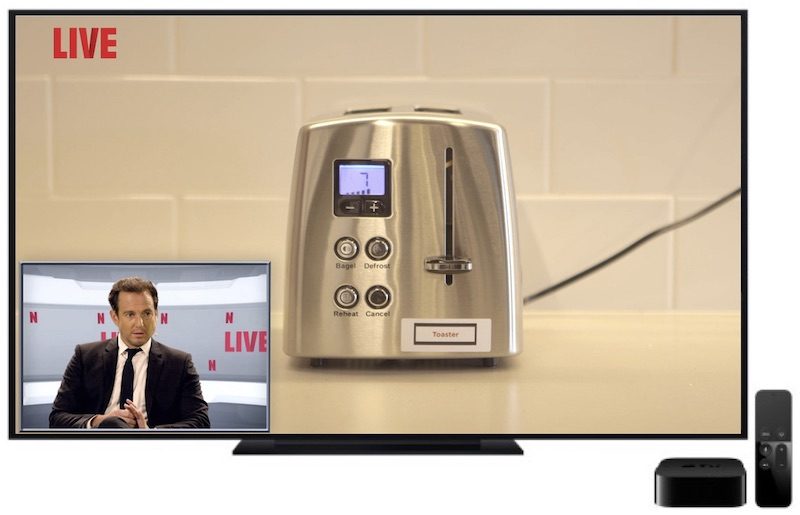 For the morbidly curious, you can watch the 48-minute, not-actually-live burrito commentary series right now on the Netflix streaming device of your choice. If it's anything like last year's John Stamos: A Human, Being "documentary," it probably won't be on the service for long.

Twelve South has revealed "AirRings," which the company says will let you "effortlessly transform your AirPods into earrings." AirRings come in different styles for both men and women, including cuffs, bands and drop style earrings, so you can listen to your music on AirPods without sacrificing your style.

USB-Speed of Light by Moshi

If you're tired of the confusing array of USB-Type A and USB-Type C cables, Moshi today announced the one USB solution to end them all: USB-Speed of Light (USB-SL for short). The accessory manufacturer calls USB-SL "the next-next-generation in charging and connectivity," and should top off your MacBook Pro in mere seconds.


With the additional USB-SL to Gigabit Ethernet Adapter "the future is truly and literally at your fingertips," providing an internet connection so fast you can catch up on your email and other notifications that have yet to arrive. Similarly, the USB-SL to HDMI Adapter provides the ultimate, crystal clear video experience "from any point in time."

Other Pranks, Jokes, and Hoaxes:

We'll update this post throughout April Fools' Day in the event that any new pranks surface.

Very cool Google prank with Ms. Pac. I like it. I wouldn't mind playing that on a regular basis.
Reactions: clg1, Aston441, TVreporter and 2 others

I got the pac man pop up yesterday March 31. It was kinda obtrusive and made me actually think the app got hijacked because I needed to use maps for a destination but I couldn't get pac man off the screen, if I closed it then it came back 30 seconds later. I ended up having to open Apple maps.
Reactions: GrumpyMom

Call me "not fun at parties" or whatever boring cliched phrase you want use but I find the yearly attempt by corporations to be funny on April fools dull and annoying.

Look at this "hilarious" product/service Google is pretending to release on April 1st HAHAHAHA. Great, now get back to mining our personal data.
Reactions: Substance90, bluespark, FightTheFuture and 7 others
T

The AirRings actually sound like they are on to something.
Last edited by a moderator: Apr 1, 2017
Reactions: Andrewtst, TwelveSouth, MaximizedAction and 4 others

Now if only "Planet of the Apps" were among this list of April Fools Jokes.
Reactions: MaximizedAction, Lone Deranger, Cameroncafe10a and 5 others
W

These get lamer every year.
Reactions: marioguarneros and Aldaris
C

If only this one were true…

Wiesenlooser said:
These get lamer every year.
Click to expand...

Because April Fools jokes are usually lame, amirite? That's sort of the purpose to have something rather unbelievable.
Reactions: GrumpyMom and tonyr6

I like the joke very much, the only thing I would say though is that traditionally at least, April Fool's Jokes were supposed to be believable to try to trick the person. There is no way anyone would be fooled into thinking Apple would actually release new Macs!
Reactions: biziclop, nzgeorge, MartiNZ and 7 others
A

They got me good!

I've been looking at various mounts for a TV in the conference room at work. If it wasn't Saturday, that would make the perfect email to send to my boss.
Reactions: GrumpyMom and 69Mustang

Altis said:
They got me good!

Looks like MacRumors is getting in on the fun as well, Apple would never allow their Mac product line to deteriorate like this!

dannys1 said:
Call me "not fun at parties" or whatever boring cliched phrase you want use but I find the yearly attempt by corporations to be funny on April fools dull and annoying.

Look at this "hilarious" product/service Google is pretending to release on April 1st HAHAHAHA. Great, now get back to mining our personal data.
Click to expand...

Is there any chance that someday we will be spared the humorless and painful ritual of April Fools Day articles? I've heard that even the local elementary school children have voted to end the practice as a silly and boring relic that ranks with "knock-knock" jokes as too juvenile for even juveniles anymore.
Reactions: marioguarneros and rkRusty
N

The new 2017 Mac Mini will have 4 cores, a pop off top, & all components will be easy to upgrade with standard parts.
Reactions: Hfunny

truthertech said:
Is there any chance that someday we will be spared the humorless and painful ritual of April Fools Day articles? I've heard that even the local elementary school children have voted to end the practice as a silly and boring relic that ranks with "knock-knock" jokes as too juvenile for even juveniles anymore.
Click to expand...

You just have to be in the right country.
S

The Best April Fool's article would be to say the Mini was updated
Reactions: nzgeorge and xnu

If only this one could be true... my life would be so much better. Although, living in Atlanta, it wouldn't help much when parts of your highway literally melts and collapses. But this Lexus idea is great, and sorely needed.