iPhone XR Has the hate for the XR died down?

Ever since the new phone has been called iPhone 11 I haven’t seen any complaints about thick heavy phone, ugly bezels and low res screen.

I think it faded quick after release honestly,

Some people still think its junk and the 11, but most people have moved on.

And honestly, its like a 326ppi screen with better contrast and blacks than its 401ppi / 326 predecessors... so its two steps forward and one back but the one back isn't that big of a deal to most

Also people forget or disregard that the 458ppi on OLED iPhones is offset by being a pentile matrix,

I can understand why some Plus purists may not be happy with the transition but almost everyone else should be. Especially if you want a non-PWM iPhone you don't have any other choices

That was mostly from the tech sphere IMO. Most people appreciated it for what it is - a splendidly adequate device for 80%+ of users to take phone calls, record some video, stream a few shows, etc.

We’re too busy complaining about the ‘Pro’ nomenclature to care about the XR.
S

I never "hated" the XR, but didn't want to get one due to the giant size of it.


Seanm87 said:
Ever since the new phone has been called iPhone 11 I haven’t seen any complaints about thick heavy phone and ugly bezels.
Click to expand...

Maybe because those people that hated the XR considers the 11 as a XR with spec bump and name change, and they didn't want to waste their time rehashing old arguments.

I don’t think it was ever an issue other than on tech boards.

I’ve got four coworkers with XR’s and they all love them. They even have the 64GB versions and have no issues. Gasp!!
Reactions: Bethanie21
A

The XR was never hated and was an extremely popular phone. 11 will even be more popular

it was even some big YouTube personalities' daily driver for the year, Sara Dietzchy and Austin Evans come to mind. I think Dieter Bohn's too from The Verge, and sounds like from not discussing on Nilay's iPhone 11 video whether or not its worth upgrading from XR and cutting himself short, he's made up his mind

I love this Drake meme he used for discussing iPhone 11: 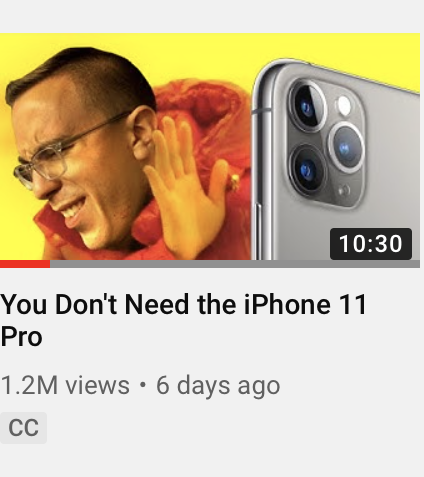 I also think Nilay lost the panel lottery on XR too, thats why he was politely turned off by it. I've seen this same crap on one panel but not the other two I've had. But he repeatedly claims he's a 'screen stickler' so he's going with Pro like he did XS at the time. I think even screen sticklers can 'get by' with this device assuming they get a good panel like I did

I have the XR while I’m waiting for my 11 pro. Gave my wife my XS. I hate this phone. This battery is amazing though.
S

Davidhedge said:
I have the XR while I’m waiting for my 11 pro. Gave my wife my XS. I hate this phone. This battery is amazing though.
Click to expand...