Recently I've been looking for a way to capture uncompressed HDMI output from a PS3 via my 15" MBP. There are many solutions available, including the Dazzle, the HD PVR and other similar capturing devices, but most of these are limited to standard definition or a high price tag.

In doing some research today, I came across a possible solution that I remain skeptical of. It's incredibly cheap and seems to only be missing a software solution. A company called MOTU develops professional-grade video capturing solutions that are in that special category of price range that require special inquiries. Needless to say, far out of range of a practical solution for a hobbyist. They also sell a product called "HD Express", which is advertised as an HDMI input for an ExpressCard slot that only works with their breakout boxes. That last part doesn't really seem logical if it truly is an HDMI input. 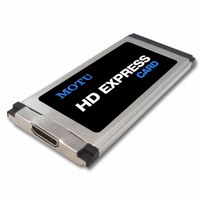 So with a cheap HDMI splitter and an ExpressCard adapter for those of us who opted for the SD card slot on our MBPs, $75 could get you an HDMI input. I guess my question is whether or not this MOTU product is really limited to use with their products or if it would function as a standalone input solution.

Thanks for your time and compensating for my probable ignorace. I know very little of electronics in general, which is why I bought a Mac in the first place.
P

and why is not knowing electronics a precursor for owning a mac???

PS3, Cable boxes, TVs and computer displays support "HDCP" which basically means the end user won't be able to do anything with the footage.

You can use this box to record hdmi footage from a high definition camera that isn't throwing up the HDCP flag, since this box doesn't handle HDCP (and for it's intended purpose, it doesn't need to).

The best way to get ps3 on your mac is via Component, using something like the HDPVR. Which is sort of a dark horse in the HD recording game.

There are components you can get, typically from foreign countries, that will "strip" HDCP signal from the chain, usually described as some sort of gender mating box or repeater. But these things don't stay on the market for very long ().
Comment
P

Because from the average user's perspective, everything is simplified. You can delve into the complicated depths of the OS, but you don't have to if you don't need to. Also, I'll never have to take the casing off of my MBP to install new parts. When I say I know little of electronics, I mean the inner workings of circuitry. I could never solder a new graphics card to the mother board. I'd be too worried about breaking my $2800 computer.

So by no, you mean I would need the $500 equipment for this to be of any use to me?
Comment
F