My (4) Internal Hard Drive Bays until recently had all 1-TB Western Digital SATA Drives and I never had a problem.

A few months ago (as a preventative measure), I purchased (4) new internal SATA HGST Deskstar Hard Drives to replace my aging Western Digital drives. Ever since then when I try to play a video in ANY of my players (like Quicktime, VLC, etc.), the video will play smoothly for about maybe 6-7 seconds and then stall and jump forward several frame to catch up? It is doing this will ALL my videos in ALL my players when I try to play from ANY of these new HGST Deskstar drives!

If I copy one of the videos to any of my other drives (Internal SSD or even external Firewire drives everything works smoothly as expected.

So what is the deal with these new HGST Drives??? Is this a know issue? Is there a fix?

This is what I purchased:
https://www.bhphotovideo.com/c/sear...Search=yes&sts=ma&typedValue=&Top+Nav-Search=

If I am not mistaken, they also seem like they are generally slow even for non-video work?
C

Have you checked the firmware version in each of them?

Not sure where to find that?

Here is what they say in System Preferences:

NOTE: I should also mention that I kept (1) Western Digital Internal Drive and it is showing no problems. ALL THREE HGST drives show the same symptoms.

The fact that when you put the old Western Digitals back in solves the problem would point to the HGST drives. But I've never heard of anything like this unless, of course, if the hard drives are defective. This is very strange.
C

choreo said:
Not sure where to find that?

Here is what they say in System Preferences:

NOTE: I should also mention that I kept (1) Western Digital Internal Drive and it is showing no problems. ALL THREE HGST drives show the same symptoms.

You should be able to see the firmware version of each drive in the System Report accessible from About This Mac.

All drives in a RAID should always be the same model running the same firmware.

And it could be that there's a newer one.

You need to call HGST with the serial numbers and they will give you a personal download link.

But to upgrade the firmware you need Windows and one of:

- SATA
- SCSI (maybe a SAS enclosure would work, but I don't know)
- eSATA card with driver that appears as SCSI and external enclosure which appears as the drive itself.
Last edited: Oct 21, 2016

He didn't mention he was running RAID.
C

pastrychef said:
He didn't mention he was running RAID.
Click to expand...

Even if she is not running RAID, there might be a better firmware.

Try AJA System Test and/or Blackmagic Disk Speed Test (both free) and report what kind of throughput you are getting.

It should be between 150 to 180 MB/s, maybe even a bit more, with properly working drives.

Gwendolini said:
Try AJA System Test and/or Blackmagic Disk Speed Test (both free) and report what kind of throughput you are getting.

It should be between 150 to 180 MB/s, maybe even a bit more, with properly working drives.
Click to expand...

Here are some of the performance results I got. Interestingly, the lowest score was one of my External Firewire 800 drives, but ALL my videos play fine from it??? 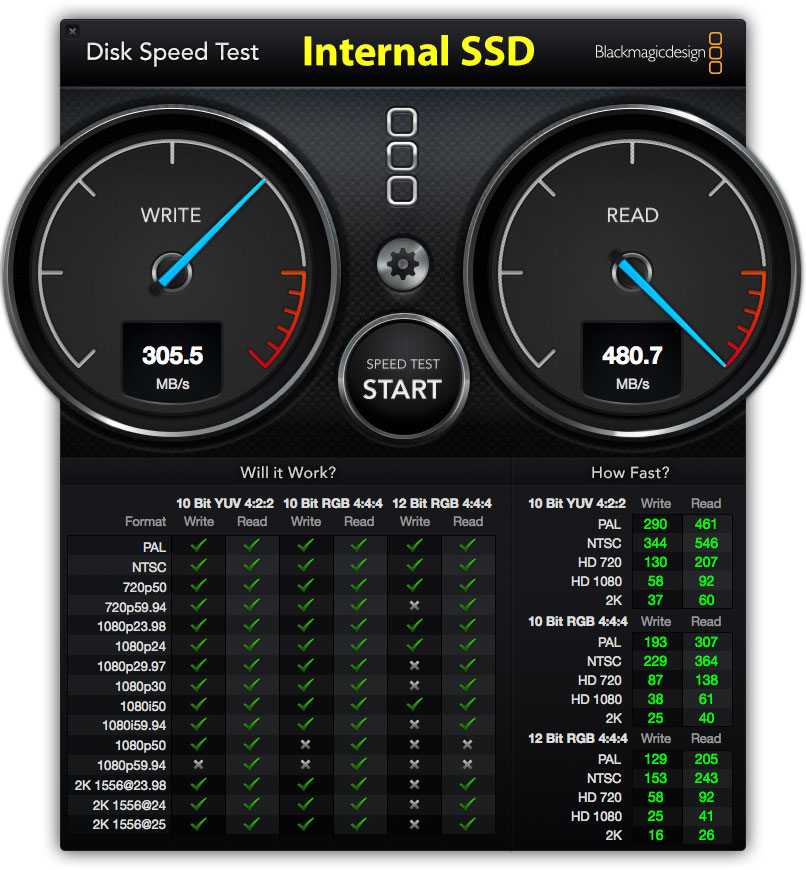 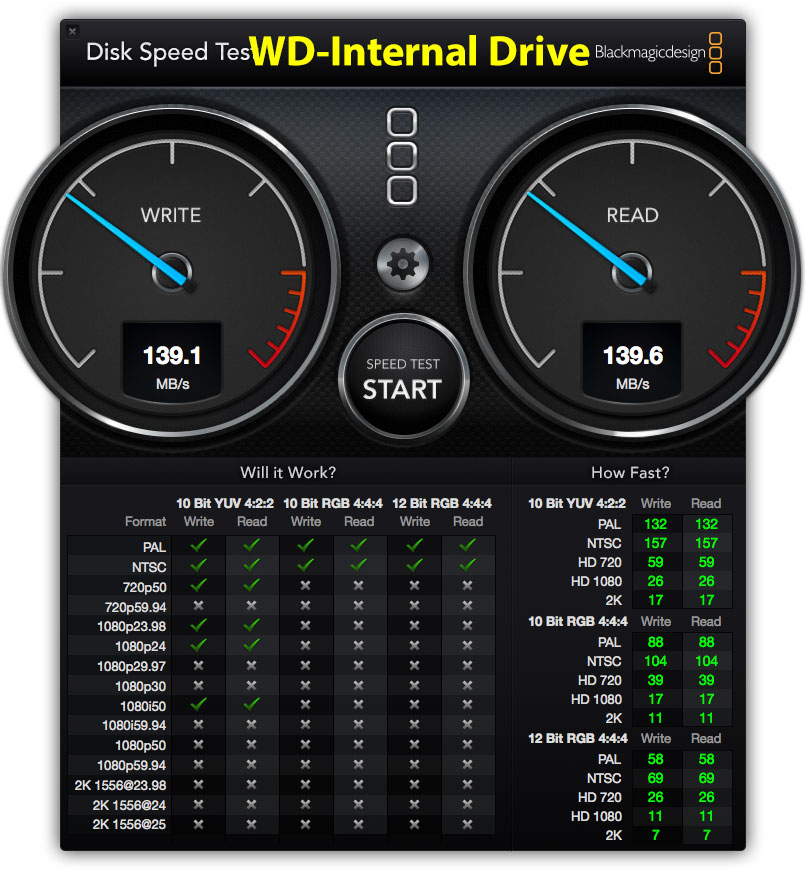 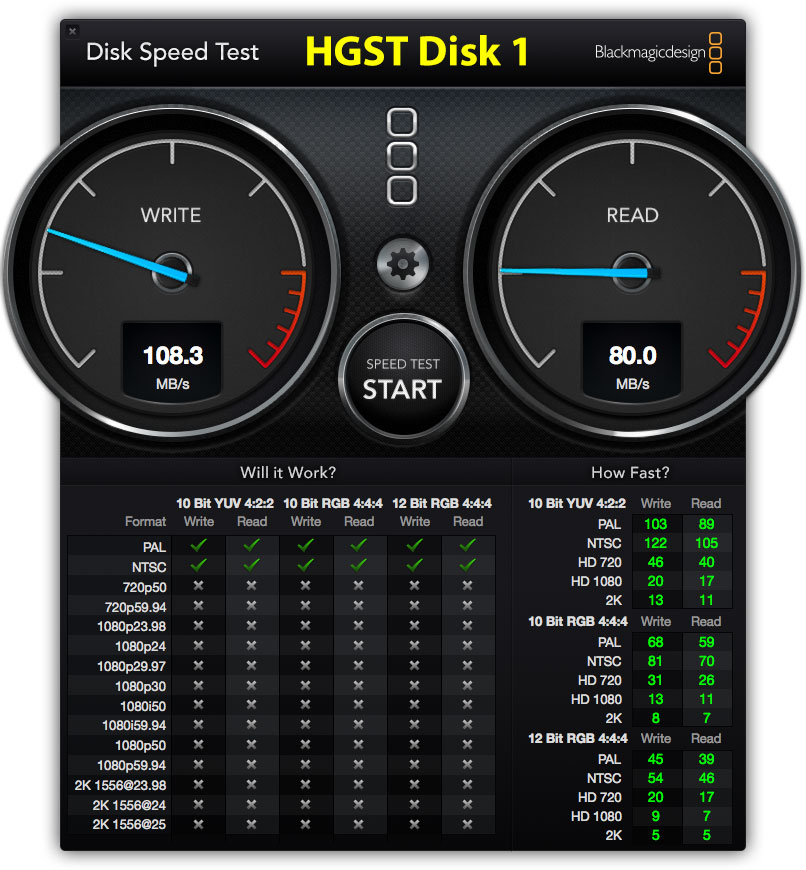 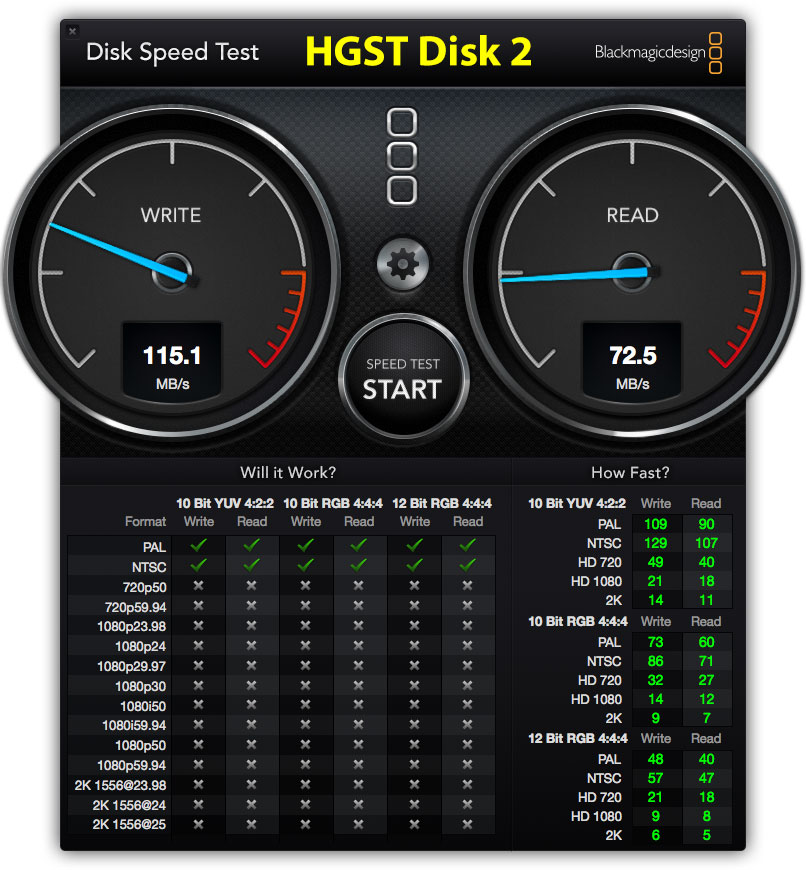 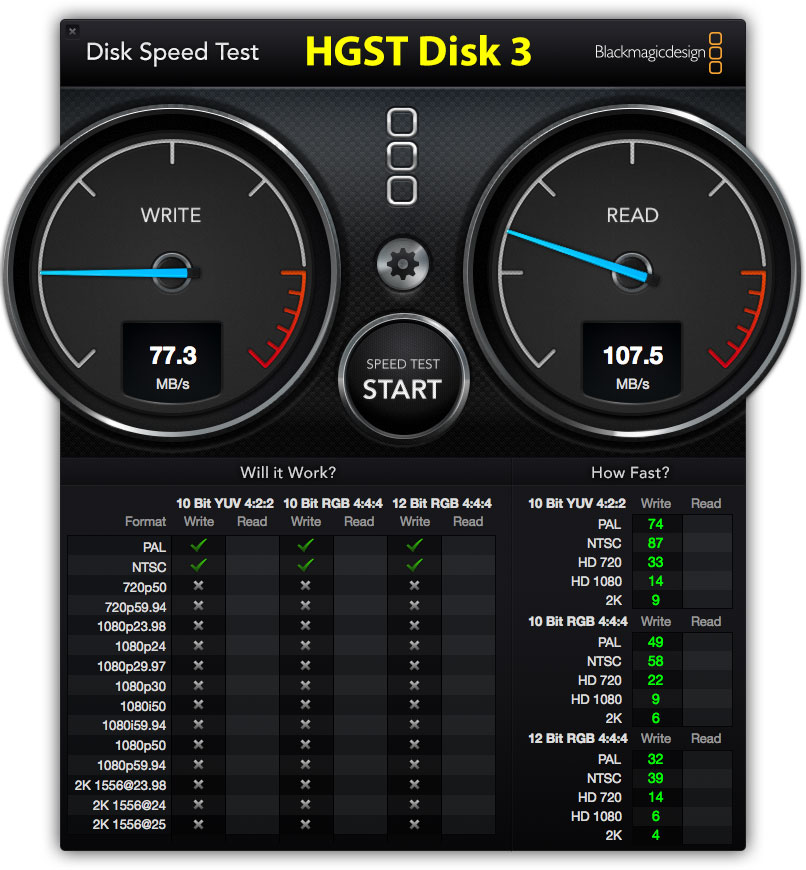 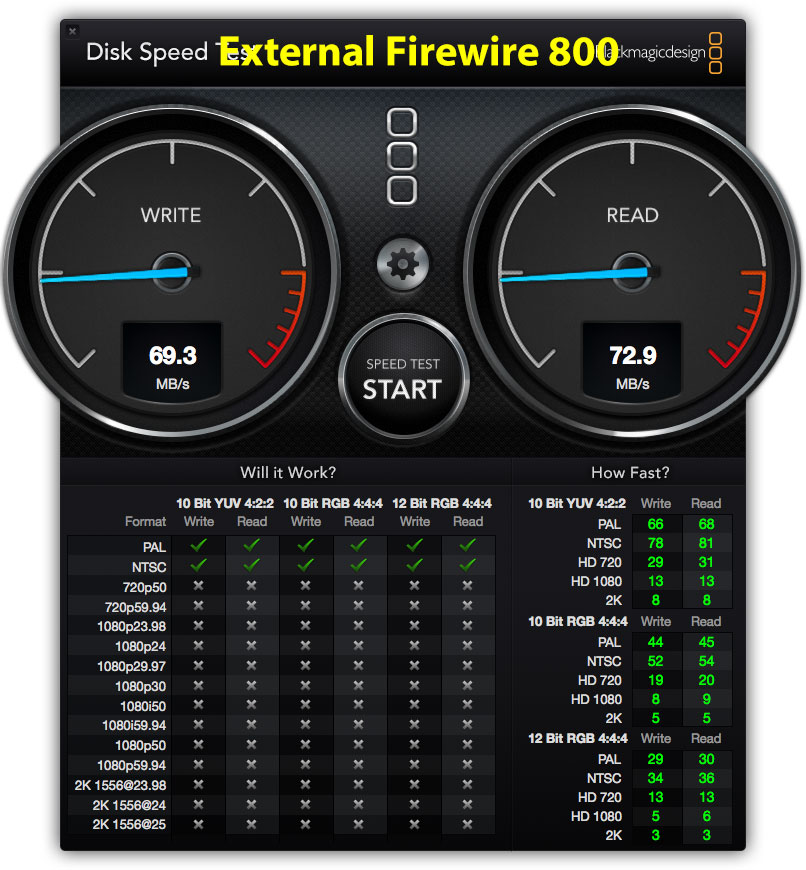 Here are some of the performance results I got. Interestingly, the lowest score was one of my External Firewire 800 drives, but ALL my videos play fine from it???
Click to expand...

Well, the speeds of the HGST indicate quite "slow" drives, but not as slow as the Firewire 800 one and not as slow to not be able to play back some simple video files.
Strange behaviour, as consumer video files hardly have a data rate of 100 MB/s, more like 1 MB/s or maybe 10 MB/s and you should be able to play them back nicely.
I have a USB 2.0 WD HDD connected to my current Mac and I can play back any consumer video file there is, unless there are other write or read processes going on at the same times. Could that be "your problem", multiple write and read processes at the same time?

And what file system do the HGST drives use?

This has been going on since March & April when I installed the new drives from B&H Photo. One of the three HGST Drives would not mount the day I received it, so B&H replaced it. All three drives I reformatted with Disk Utility (Mac OSX Extended) the day they were installed. The three drives came in on 3 separate orders over a 2 month period.

I only put two-and-two together a few weeks ago as to what was causing the video problem that it might be the "dives". At first I thought it was maybe just an OS upgrade or something. Then it also dawned on me that even opening the root folder on one off those drives has a short delay before the folders show up in the new open window. Just maybe a one-second delay or so, but something I never experienced with the Western Digital Drives.

I may just have to go back to Western Digital and trash these new HGST's.

Sounds more like an incompatibility issue between macOS and how these drives stream or cache data.

Shot in the dark:

Try disconnecting that Velocity Duo and see what happens.

A month or so ago I was looking at getting a Due or the Sonnet and went down a rabbit hole that indicated the drivers on a Duo are sometimes not compatible with other things.

If that doesn't do anything then I agree with the above comment that it sounds like you got a bad batch of drives. HGST are supposed to be the best right now. I've got several with no issues.

Something is wrong. Those HGST drives aren't just a little bit slow, they are WAY off for 3.5" SATA hard drives.
J

I have 3 HGST Dekstar NAS drives, 2 of 3TB capacity and one 6TB capacity. Both models have the same behaviour as choreo has descrived, I have resigned to not mount it inside the MacPro 5,1. Because with Aja Disk test, I get 180 MB/seg with 3TB and 220 MB/S with 6 TB HDD, but both drop frames. With AJA I can see that after some seconds the HDD do a sound like calibrating platters or something and drop to nearly 0 MB/s for a fraction of second in AJA graphicDisk test.

The joke is if I mount both models of drives in a Stardom ST2 external box and connect it by USB 3.0, with the same AJA test all it's fine, no drops to 0 MB/S. I think it's a firmware issue with this NAS drives, maybe choreo's drives are NAS variants too or not. Additionally the HGST 6TB NAS HDD only mount when cold start. If I restart the MacPro, then the HGST 6TB doesn't mount. This not happen with a MacPro 2,1. I have reported this to HGST support, but no specific or positive feedback to resolve it. Not firmware update have offered.

I have several Seagate HDD's of various capacities and all works fine.
Reactions: pastrychef

What a bummer. Good to know.

It's always dissabled, but thanks. I have tested with MacPros 4.1 and same issue.
C

Is it a fragmentation problem?

Jumpers - are there any jumpers on these drives? It might be worth investigating what mode is optimal for your set up.
J

It seems HDD firmware incompatible with Mac Os or MacPro firmware. It's works without issue on external Box USB 3.0 and a Dock Usb 3.0.

Inside MacPro (4,1 and 5,1) doesn't work correctly, drop frames with light Mbps video codecs. Doesn't need Proress or uncompressed to drop frames. With AJA system test it drop to 0MB/S about every 30 secs, for a fraction of second, sufficient to drop video frames, and with H264 loose the image and show artifacts and colors for several seconds because long GOP.

For Backup tasks and file copy can work because when drop performance inmediately get a peak of performance that compensates, but not for video playback or video editing.

And as I mentioned above with an external USB 3.0 BOX, the performance is constant with a plain graphic.

It looks like the NAS versions of these HGST drives have a special firmware designed to purposely slow down the drives to reduce noise and vibration for NAS applications:
http://arstechnica.com/civis/viewtopic.php?t=1241379

It would appear that they are purposely not meant for normal full-speed desktop use.
C

ActionableMango said:
It looks like the NAS versions of these HGST drives have a special firmware designed to purposely slow down the drives to reduce noise and vibration for NAS applications:
http://arstechnica.com/civis/viewtopic.php?t=1241379

It would appear that they are purposely not meant for normal full-speed desktop use.
Click to expand...

If you are not using RAID, you might be able to set a parameter to run them in single drive mode.

This reminds me of the fiasco that was WD Greens installed in computers. WD Greens are designed for DVR applications. They have a special firmware that aggressively spins down the drives as much as possible. When installed in a computer running a modern operating system, this results in spin up/down cycling that is occurring hundreds or even thousands of times more often than normal, leading to premature drive failure.

This led to a poor reputation for WD Greens. I myself had two, one of which failed completely and the other started to show signs of failure. To be fair to WD, they were never meant for computers, and WD released a utility that enabled owners to change the feature and thus work correctly in a computer.

I am seeing a similar story here (albeit the affect is on speed, not reliability). The drives are specifically designed for NAS use and optimized as such via firmware.

You've installed them in a desktop and are expecting them to act as normal desktop drives. I'd look for a Hitachi utility to turn off AAM or whatever is causing the problem. Failing that, I'd return the drives and buy the 3TB HGST drive variants that are meant for "normal use" in desktops (or some other brand of course).

Jordidh said:
I have 3 HGST Dekstar NAS drives, 2 of 3TB capacity and one 6TB capacity. Both models have the same behaviour as choreo has descriibed,
Click to expand...

At least I am not alone! Was starting to think it was just me!

• Mine are all NAS (as indicated in original post link).
• Always have Hard Drive Sleep off in Energy Prefs
• Not a fragmentation issue as this started immediately after I installed the drives and copied my data to them. Two of my three drives have not had any files added or deleted (except to test this video issue).

I just ordered a Toshiba 3TB internal drive to try replacing one of the HGSTs (my first Toshiba). I will report back as soon as I get installed.

I should also probably mention that one of the new HGSTs could not be formatted when I first received it - it would not mount so I had to have it replaced.
You must log in or register to reply here.
Share:
Facebook Twitter Reddit Email Link
Register on MacRumors! This sidebar will go away, and you'll see fewer ads.
Sign Up
Top Bottom