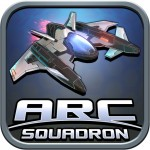 Our sister site TouchArcade is continuing its new promotion called "Free Play" in which they work with developers to offer highly rated games for free. The latest offering is the arcade-style space combat game Arc Squadron.

Arc Squadron from developer Psyonix is an arcade-style space combat game built using the Unreal Engine, so it's definitely a visual showpiece title.

Beyond its great looks, though, lies a visceral behind-the-back rail shooter with a heavy influence from the classic Star Fox series. An intuitive touch control scheme translates your taps, drags and swipes into firepower, barrel rolls, and deft ship maneuvers. The controls are what really appeal to me about Arc Squadron, as it feels like you have real hands-on control over your spacecraft, almost like it's an extension of your finger, and it's much more satisfying pulling off cool moves using a scheme like this as opposed to some plain old virtual buttons.
Click to expand...

Arc Squadron was originally released this past October and received a 5 star rating from TouchArcade. The game is normally $4.99 and has never been free before. [Direct Link]

Honestly, the description hits on a lot of the key selling points I was planning on having for my game... I kind of hope it's not as fun as I think it's going to be with that description (because that'll mean I can compete with it easily...)

Edit: it's definitely fun and challenging and darn are the graphics pretty... I'm not sure if my game can compete...
Last edited: Dec 19, 2012

The heads-up on these free Apps is always appreciated. And this looks like a quality App too, even if it weren't free.
A

Downloading now. Have no idea what this game is but when it goes free I download them

This is a great game, reminds me of the Sega Mega CD game Silpheed!

Risco said:
This is a great game, reminds me of the Sega Mega CD game Silpheed!
Click to expand...

If you wanna get really geeky and obscure, you could say it reminds you of Soul Star.

Renzatic said:
If you wanna get really geeky and obscure, you could say it reminds you of Soul Star.
Click to expand...

Wonder why you need the front camera.

akfgpuppet said:
Wonder why you need the front camera.
Click to expand...

To determine if you're running iPhone 3GS or lower, iPod touch 3 or lower, or iPad 1 - all of them are with 256MB RAM or lower.
D

Great I thought I give it a try then I saw the huge list off In-App purchases. It's yet again a freemium came...am I the only one still comfortable with paying 20+ for a game/program but it turn expect it to be full-featured from the get go?

I hate the freemium business model. This appears to be the worst of both worlds. They were charging for it and selling in app "money".

I don't mind in app purchases but they should be limited to DLC content and addons rather than a requirement to progress. I also don't mind it when they offer a "lite" version to try with the option to "upgrade" in app to the full version.

Never give up! Trust your instincts!

Thanks for posting this.

Galatian said:
Great I thought I give it a try then I saw the huge list off In-App purchases. It's yet again a freemium came...am I the only one still comfortable with paying 20+ for a game/program but it turn expect it to be full-featured from the get go?
Click to expand...

Damn. IAP again? I think I'm going to delete the game right away. Thank you for the update.