Home Folder in ext disk "not supported" by Apple

I thought that like any *nix machine, my new mac mini would work just fine, when I ordered it with small soldered ssd, which would contain System and Applications and have everything else in external drives. Since you can use cheap, but fast usb3.1g2 ssd (10Gbit/s) or even faster tb3-ssd (40Gbit/s). Seems to be not so "optimal" solution.

Something went wrong with migration from old mini's 2TB fusion drive.
And then maybe copied stuff has permission problems. Maybe APFS isn't so mature yet?
Apple's solution to this is mysterious undocumented command:

Code:
https://support.apple.com/en-us/HT203538
Problem with the command was, that it never got through and I guess there no verbose mode for this?
Apple's support didn't know or couldn't tell anything about the command and whether it operates only in startup disk or in all disks or something else.

After "taking care of things" Apple's support told me, after 2 months, that having Home Folder somewhere else, than in internal startup drive is not supported by them and if I want to get support from them, I need to move my home folder to internal drive.

Space used in my drives:

All these were in cheap, fast, selfmade fusion drive in old mini.
And now Apple wants me to put all this in internal ssd, id if I want their help to get file permissions fixed...
Any thoughts?
Last edited: Jul 25, 2019

Just an idea, but something I'm in the habit of doing is creating my own directory structure inside a subdirectory of $HOME and mostly ignoring the pre-created directories: 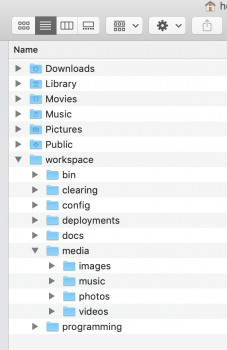 I imagine something like this could be on a separate drive and mounted to e.g. $HOME/workspace using /etc/fstab no problem.
Reactions: Partron22
Comment
T

frou said:
Just an idea, but something I'm in the habit of doing is creating my own directory structure inside a subdirectory of $HOME and mostly ignoring the pre-created directories:

I imagine something like this could be on a separate drive and mounted to e.g. $HOME/workspace using /etc/fstab no problem.
Click to expand...

How that will help, if internal ssd is too small and to have support, Apple says that they only support if the whole homedir is in internal ssd?
I guess that mysterious permission fixing switch on diskutil needs files to fixed, to be in startup drive?
Comment

toke lahti said:
Apple says that they only support if the whole homedir is in internal ssd?
Click to expand...

I would guess that only the $HOME top-level and $HOME/Library (and maybe $HOME/Desktop) need to be on the internal SSD because it's critical that they shouldn't disappear while the Mac is running.

If this is the case, then maybe the reason Apple Customer Service don't mention it is that it's deemed too error-prone to have customers messing around with fstab and the like.

Anyway... you'd probably get more replies to this thread if it was moved from the Mac Mini forum to the MacOS forum.
Comment
T

Can I somehow move this thread to another forum?

My problem with permissions started when migrating from old mini to new one.
Lots of e-mail attachments are forever downloading.
Also office2011 can't build some database and therefore I can't use correcting the spelling.

Unfortunately it works only when those files to be fixed are in startup drive.
~/Lib must be the most important and it's my biggest folder (52GB), so I can't fit it to internal ssd.


Code:
I'll try to move this to macos forum.
Comment

I keep VERY LITTLE data "in my home folder" (other than mail, which I "clean out manually" now and then to keep its size down).

ALL my important data (other than email) is saved on a SEPARATE VOLUME (partition).
It's "completely apart" from my boot drive(s).

I have my own folder/file structure created to make it easy to file and find things.
Doing it this way, my data drive is "insulated" from problems on the boot drive.
And it's easy to back up -- takes about 5 seconds to do an incremental clone using CCC.

OP:
Are you in "permissions hell" right now?
The best way out might be "to start over".
There are other ways to escape, as well.
Comment
T

I'd say it's pretty impossible to keep ~/Library's content somewhere else.
It might be best to "start over" with new user account.
If there would be somewhere a comprehensive list of all the settings (tens in OS, hundreds in Apps) to fullfill...

But yeah 22GB is Apple's Mail and 13GB is Thunderbird in that Lib...
Comment
K

Maybe it's APFS or maybe it's Mojave, but when I installed the system to external and then created a user and then pointed that it's home folder is the existing one, there was just constant "Library repairing" (same window wants your password for 100x) and all the settings of the old user were gone.

I might try again, after I get my TM backups done, there's again something weird going on, "Preparing backup" has been on for 6 hours, used 2 hours of cpu time and both data read & written is about 400GB (in activMon)...
Last edited: Jul 28, 2019
Comment
T