iPad How is your feedback for iOS9b1 on iPad Air 2?

how is your feedback for iOS9b1 on iPad Air 2?

Thanks and have a nice day!
K

Stable enough, but battery drain is crazy fast. Less than an hour using it and I'm down to 60%.
T

Some slight lag on the homescreen. Picture in Picture is awesome, though.
Battery is slightly worse, but to be expected on beta software.
H

hasn't been bad. a little unstable as with most betas. had to force restart once so far.

Battery fine, some lagging in Safari, when typing into Siri the delete button types o each time you hit it.
R

Can you do Picture In Picture while you have Split Screen going on?
T

RoboCop001 said:
Can you do Picture In Picture while you have Split Screen going on?
Click to expand... 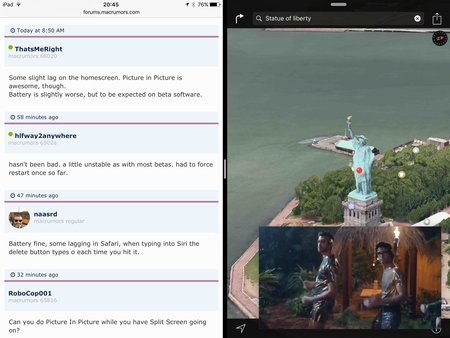 I installed it on my iPad Air 2 (As an upgrade from iOS 8.4 Beta 4) just to play around the new features and then I planned to restore back to the previous version I was running since I knew as a beta 1 it would be buggy. My iPad ran pretty hot after I installed it, and the battery drained pretty fast, but then it cool down after a while. Some of my apps crashed on launch, some of the new multi tasking features like split screen are buggy, the picture and picture video is buggy (I couldn't go back to full screen after I put the video in PiP mode) etc. as I expected a beta 1 to be. So right now I'm restoring back to iOS 8.4 Beta 4 which has been very stable for me. There isn't much terribly exciting for me in iOS 9.0 unfortunately (except maybe the system optimization) so I can wait for the release version in the fall.
Reactions: The Doctor11
R

ThatsMeRight said:
Yes, you can.

That is so awesome! Can't wait to update in the Fall.
Reactions: The Doctor11
C

Thanks to all of you!

Think will wait for Beta2

I have no battery drain at all on my iPad Air2 Wifi! Yesterday evening went to bed at 83%, this morning it was 82!!

Mail is slow and sometimes shows no content of the mail. Split screen sometimes a little bit slow but in general for me OK to keep it to beta2!
Reactions: NoWayBehind
You must log in or register to reply here.
Share:
Facebook Twitter Reddit Email Link
Register on MacRumors! This sidebar will go away, and you'll see fewer ads.
Sign Up
Top Bottom