How many of your iMac’s ports are populated?

I’m asking, because I currently have all four of my USB ports, my Ethernet port, and my Aux port populated.

I have a 4-port USB hub attached that I have also populated all except for one USB port on. My Mouse is connected to my apple extended keyboard.

Know what ports I haven’t used even a single time? Thunderbolt/Displayport.

Laptops are great, but Desktops are where the money is.
Reactions: ruslan120 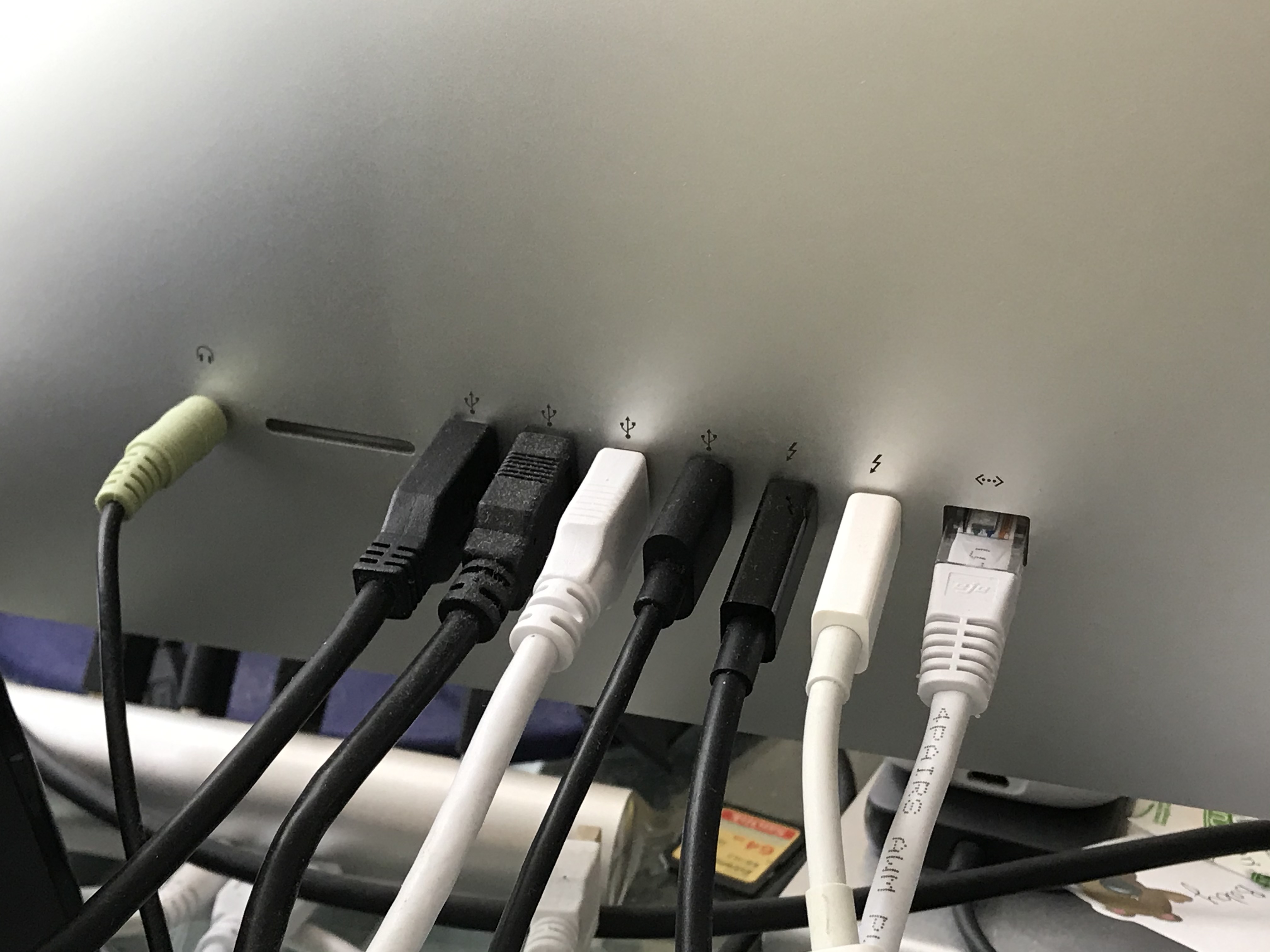 Yep, I'm with you on that one. Originally had two USB ports taken up by hubs, but one hub became faulty, so now I'm down to just one hub and like you also utilize USB ports on my wired keyboard. Just because it may be a bit more unusual, I'll note that one Thunderbolt port is taken up by a Firewire dongle chain (less used these days), while the other routes to a secondary Ultrafine display. I used to use the SD card slot, too, but my hub has both SD and micro SD readers on the front, which makes for easier access.
Reactions: ruslan120

All but one USB-C/Thunderbolt, the ethernet port and the headphone port are in use.

I also use a wired keyboard, and one of the ports on that is used for my wired mouse. All but one of my USB ports are used (I keep that free for connecting memory sticks. One USB port is used to connect to my external monitor because I have several things connected to it’s USB ports. The monitor also accounts for a thunderbolt port. I also have ethernet connected as I find it more reliable.

One USB-C/Thunderbolt 3 for my SanDisk Extreme Portable SSD, one for UA Apollo Twin Mk II, one USB 3 for a USB to Lightning cable for Magic Keyboard/Mouse/Trackpad charging and iOS device tethering (rarely) and a second USB 3 port for Seagate Backup Plus 5TB for Time Machine backups. It only stays attached sporadically as it is a spinner and I dismount the drive as soon as the TM backup finishes.

I use Bluetooth for my input devices and 802.11ac for LAN/WAN...interesting to see how many USB ports are in use. Trying to figure out all the devices connected, I assume it’s external storage.
D

All current iMacs have Thunderbolt 3. Pragmatically, Thunderbolt 3 ports have a USB mode to them also. So there are six ports with USB mode possible. ( iMac Pro has eight. )

However, if there is a require for more bandwidth coupled to additional ports then Thunderbolt is a solution. USB Hubs drag data speeds down to the lowest common denominator on active devices.


along with easier to reach headphone and SD card slot than standard iMac ones. [ Which will show up in your survey as folks leaving USB cables plugged into the back of the iMac all the time to make it easier to intermittent things like charge phone (or some other Apple Lightning device ). Similar issue off onto powered hubs (more power than hub actually needed. ) ]

Thunderbolt 2 solutions are more problematical at this point; at least for new options appearing on market. Apple waiting all the way into 2017 to move to TBv3 on the iMac makes that problem incrementally bigger.


What collection will probably show is that most folks don't have high bandwidth requirements ( 5Gb/s is "fast enough" for lots of folks. ) and that most folks can get by with just one screen. Thunderbolt is an option if they more out of that state or sell/transfer machine to someone who is in a higher bandwidth needs state. For example, if later need 10+ Gb/s USB device can get there with Thunderbolt. You won't on an extreme hub hooked to a legacy generation USB controller.

Laptops are great, but Desktops are where the money is.
Click to expand...

Maybe in a narrow corner of the Windows ( or Linux ) PC world.... 70+ % of all Macs sold are laptops and all of them at substantive profit. 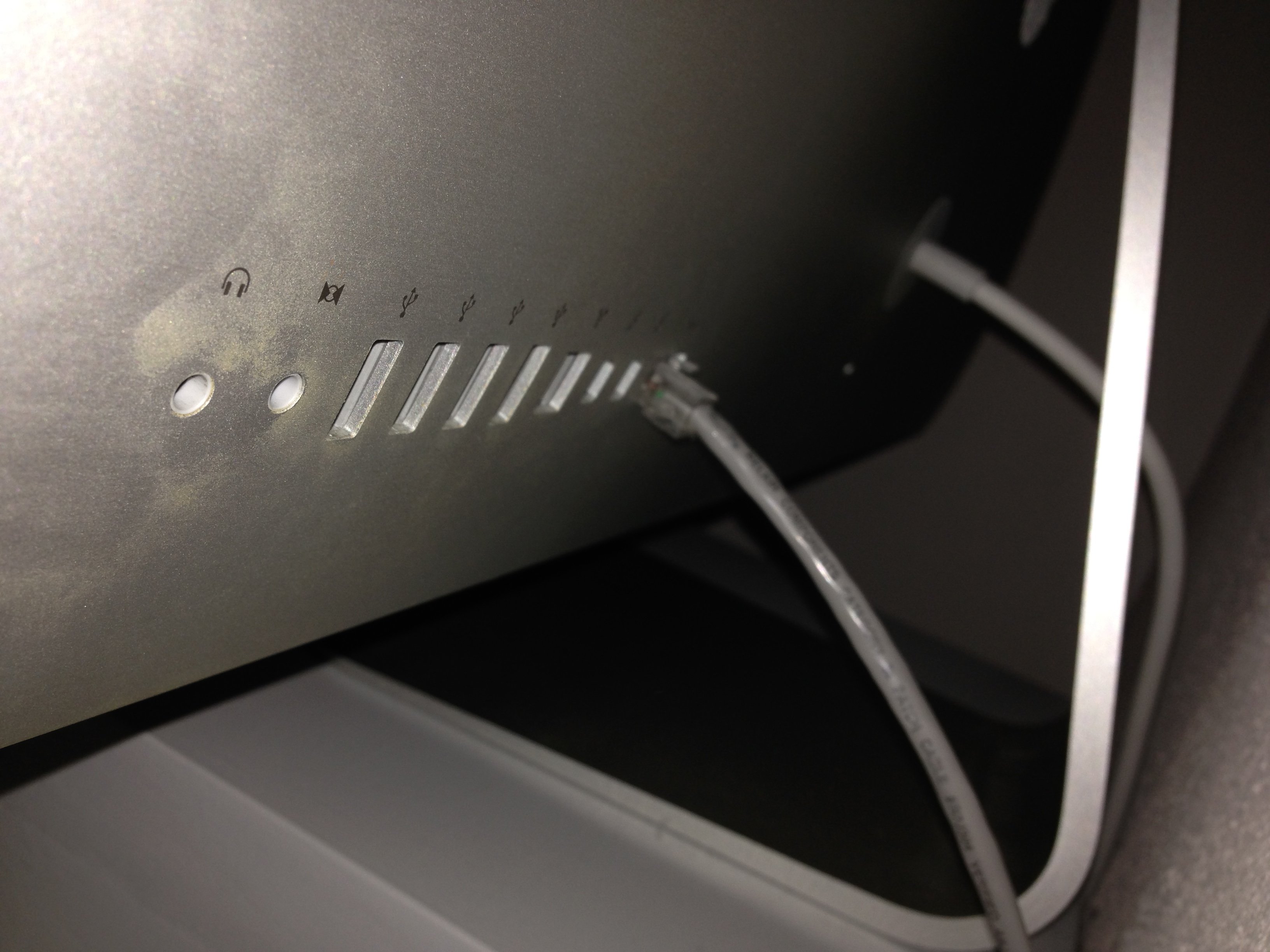 Wireless all the way! Except for internet of course
Reactions: ruslan120 and Fried Chicken

That’s quite personal and I refuse to answer.
Reactions: Fried Chicken and ruslan120

Wireless all the way! Except for internet of course
Click to expand...

There is no replacement for a little wire; Bluetooth sucks, wireless speakers suck, Logitech wireless mouse with no latency is the exception that proves the rule

Wireless all the way! Except for internet of course
Click to expand...

One thunderbolt port is used for a usb hub (I have one which clips to the bottom of the iMac screen). Of the 4 USB ports, one is connected to a printer, while the other occasionally gets used when I want to plug in my iPad or iPhone.

Else, keyboard, mouse and trackpad are wireless, as is the internet connection.

All except the audio port.

Edit: Newer setup since the video. Pending cable management for the eGPU. 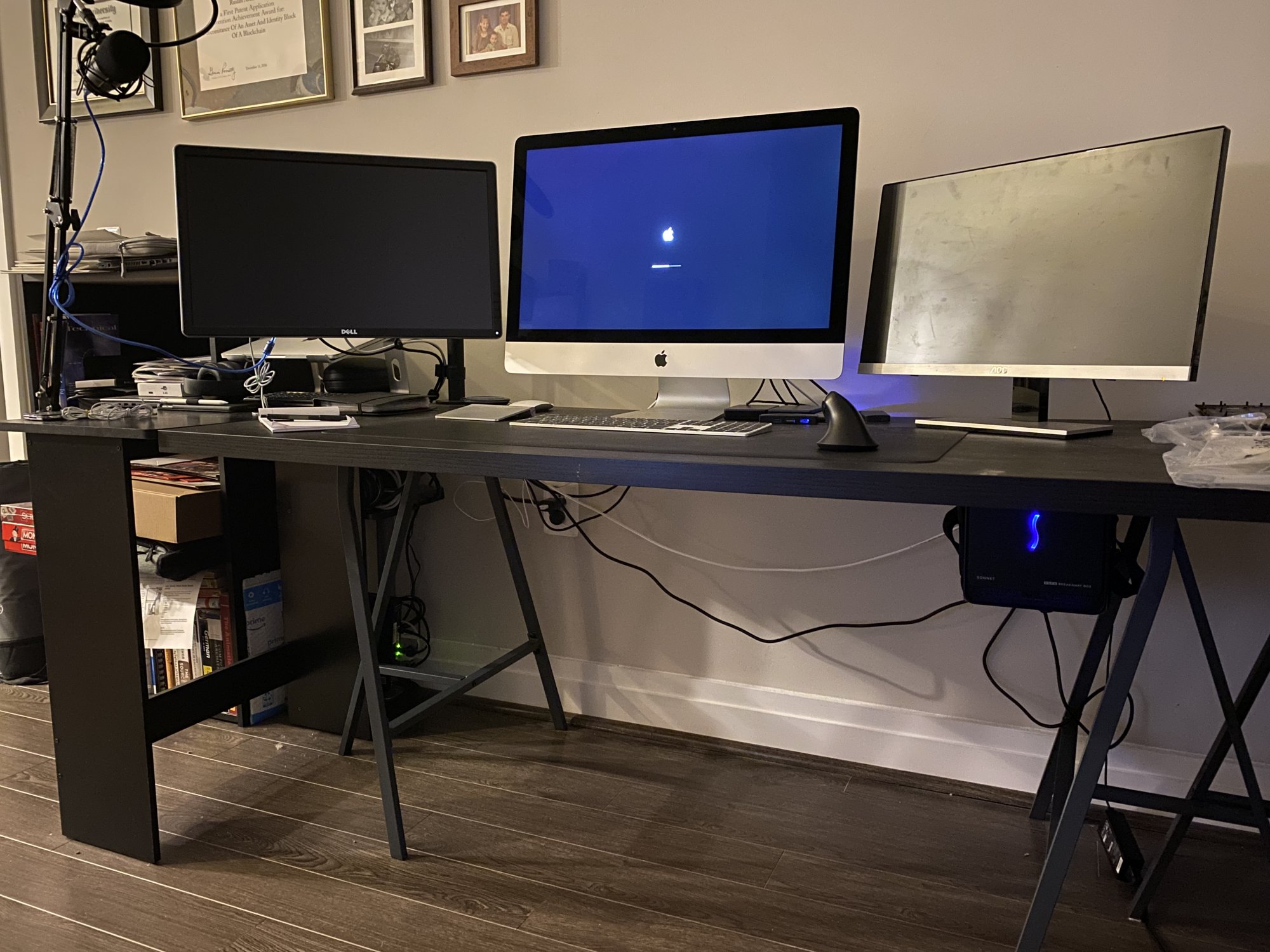 Nice setup! What's it like using the 4K 27" with the 5K 27"? Is the resolution difference noticeable when moving windows between the two? (Asking because I'm looking for an upgrade for the 1080p screen).

Edit: My mistake in assuming the ROG is 4K. Never mind.

ruslan120 said:
Nice setup! What's it like using the 4K 27" with the 5K 27"? Is the resolution difference noticeable when moving windows between the two? (Asking because I'm looking for an upgrade for the 1080p screen).

Edit: My mistake in assuming the ROG is 4K. Never mind.
Click to expand...

The resolution is 2560x1440 which is nice because it matches the 5K at 2x Retina. I also went with it because it supports 165Hz G-Sync so I also have it connected to my Alienware gaming PC (since it has dual inputs I can switch between the Mac and PC).
Reactions: ruslan120
You must log in or register to reply here.
Share:
Facebook Twitter Reddit Email Share Link
Register on MacRumors! This sidebar will go away, and you'll see fewer ads.
Sign Up
Top Bottom