How to delete Time Machine local backups on High Sierra

Actually the option for auto backups has always been there, just that it was named differently in earlier versions.
Originally just had "On-Off" buttons, turn it off and no auto backups, but starting with Sierra they changed to the present "Backup Automatically" check box. 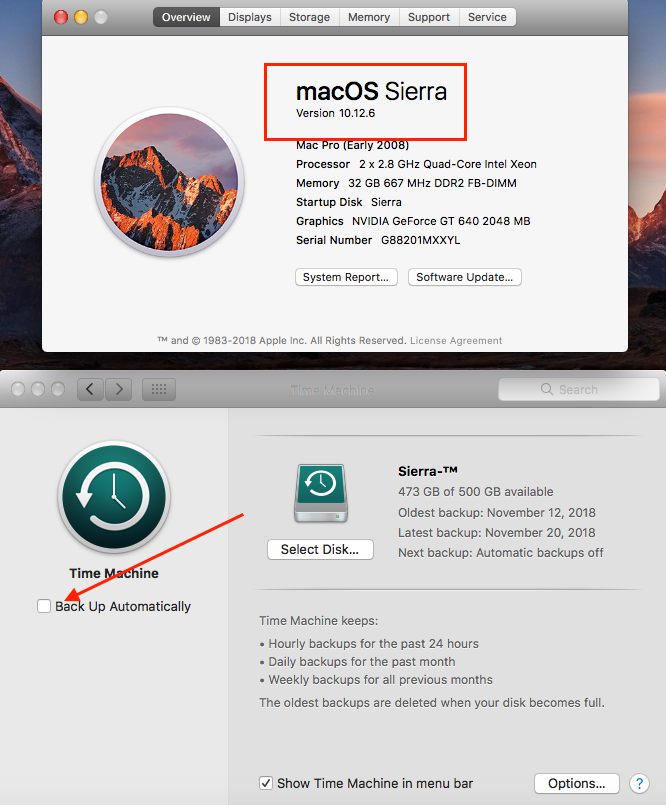 This free'd up almost 35 GB of space on my 1TB SSD by deleting about 20 snapshots. But even though the command looked like it had run and finished in 5 seconds, the space was actually freed up slowly over a 15+ minute period of time.

vbctv said:
Yes, I guess the option first appeared in High Sierra but I missed it.
Click to expand...

I've seen that options for years in Mac OS X.

Cinetagonist said:
Need some automation in this process. Put it in Terminal or create a script with Automator:

I copy paste it to terminal, but it does not seem to work.

How this problems goes with the new catalina os?
Still remains?

Can somebody tell me how to give the correct command in order to see the TM images?
Except if Apple fixed this rediculous problem, to have TM disabled and still the images to be created in disk!

Code:
It is working for me on Catalina without using the sudo there.
Reactions: cool11

cool11 said:
How this problems goes with the new catalina os?
Still remains?

Can somebody tell me how to give the correct command in order to see the TM images?
Except if Apple fixed this rediculous problem, to have TM disabled and still the images to be created in disk!
Click to expand...

Weaselboy said:
Code:
It is working for me on Catalina without using the sudo there.
Click to expand...

I know my user, but how do I discover the name of my macbookpro?

cool11 said:
I know my user, but how do I discover the name of my macbookpro?
Click to expand...

It is shown under Sharing in System Preferences. But you should see it when you are in Terminal also.
Reactions: cool11

It's not often that I need to ask for help at MacRumors.

But -- even though I NEVER use Time Machine, I seem to have accumulated a "local backup" or "local snapshot" (or whatever the heck it is, like I said, I never use TM).

I want to get rid of it.

If I open terminal and enter:
tmutil listlocalsnapshots /

BUT THEN, if I retype ths "listlocalsnapshots" command, it reports the file is still there.

If necessary, I will boot from an external volume, then see if I can locate and delete the file manually, BUT...

IN WHICH DIRECTORY are local snapshots stored?
Invisible, I would suspect, but under what name?

You'll note that the date of the above snapshot is not even current, it's now November 1.

Can anyone offer some help?

See if this helps. It should kill any snapshots.


Code:
My understanding is that list is not really files, but a pointer to the group of files that are part of the snapshot, and you cannot really see that in the file system.

I just upgraded my Mac to Mojave and can no longer see any backup volume mounted even though Time Machine is enabled, my disk has enough space, and therefore should be used to store local backups..

This link shows a way to mount the snapshots so you can see them better.

Did you by chance just update to Catalina? I had a random, old snapshot that showed up after I upgraded and I had to disable SIP to finally get rid of the stupid thing.

I tried your suggestion in #35 above:
tmutil listlocalsnapshotdates / |grep 20|while read f; do tmutil deletelocalsnapshots $f; done

Doesn't work, the file is still there.
Or at least, terminal reports it as "still being there".

So I'll ask again:
WHERE are these snapshot files located in the disk/file hierarchy of things?
Even if it's in a directory that is normally invisible?

Are there any 3rd party utilities that can locate and delete snapshots/local backups?
This is for the Mojave OS.

Fishrrman said:
Are there any 3rd party utilities that can locate and delete snapshots/local backups?
This is for the Mojave OS.
Click to expand...

CCC can help. I know you are a CCC fan like me. Launch it and click on the Volume that has the Snapshot. It will show the Snapshots in the upper right corner of the CCC window. You can right click on the Snapshot and select Delete.
Reactions: Fishrrman and HeadphoneAddict

Coastal, thanks for the tip, because that's where the problem seems to have been centered.

I opened CCC and (never having even bothered to check for this before) checked the "snapshot" pane. Sure enough, there was the item that I had been looking for -- with the date that was the same as the one revealed in terminal (from my post 34 above).

Well, CCC's documentation said you could delete it by right-clicking and choosing delete.
I tried that, and CCC threw back an error msg saying the deletion didn't work and I should try restarting the Mac.

I restarted, tried again -- with the same results.

I then tried going to CCC's menu and choosing "uninstall CCC" (hold down option key while clicking on "CCC" in the menu bar). The uninstall dialog gave me the option of also removing any snapshots. So... gave that a go.

I then re-opened CCC (for some reason, when you "uninstall" CCC using the menu choice, it leaves the CCC app in your applications folder).
The snapshot was STILL THERE.
And again, it couldn't be deleted.

Something, somewhere, was corrupted.

So...
I did it "the Fishrrman way":
- Booted from an external boot drive
- Did a "get info" on my internal drive, and checked the option to "ignore ownership on this volume" (makes it easier to nuke stuff)
- Launched "EasyFind"
- Put "bombich" into the search string and let it go
- There were about a dozen hits, I deleted them all
- Then went to the applications folder (on the internal drive) and manually deleted the CCC app.

Next, I rebooted back to the internal drive (2018 Mini).
I then downloaded a completely fresh version of CCC.
Opened it, went to the snapshot pane.
Right clicked and chose "delete"...
... and finally, it deleted and was gone!

This reclaimed about 10gb of space on my boot partition, which is 150gb in size.
So 10gb makes a difference.