How to guide - Install Auxiliary PSU without drilling (requires soldering)

Hello everybody! This is my first post here, though I've been lurking a lot over the past months gathering info on how to install my 7970 safely in my Mac Pro 5,1. I noticed that though many people have posted their setups, I couldn't find a thorough, complete how-to guide on how exactly to do this and what exact parts to get, so after successfully completing my build, I figured this should be my first post.

Before starting, just wanted to give a thank-you to all those whose posts have helped me or inspired my build, especially Dr. Stealth, OrangeSVTguy, and J-MI. Also, do everything at your own risk; if you don't know what you're doing, it might be a better idea to use the drill. As always, I take no responsibility whatsoever for any burns, dead Mac Pros, raging, screaming, crying, frustration, failing, confusion, dead kittens, etc. With that done, lets get started!

First, the supplies youll need (the ones I used are in parentheses):

With all the supplies, the first step is of course to open up the Mac Pro and remove the hard drive sleds, the optical drive bay, and the main PSU as detailed in the service manual. After this, your Mac Pro looks like this. 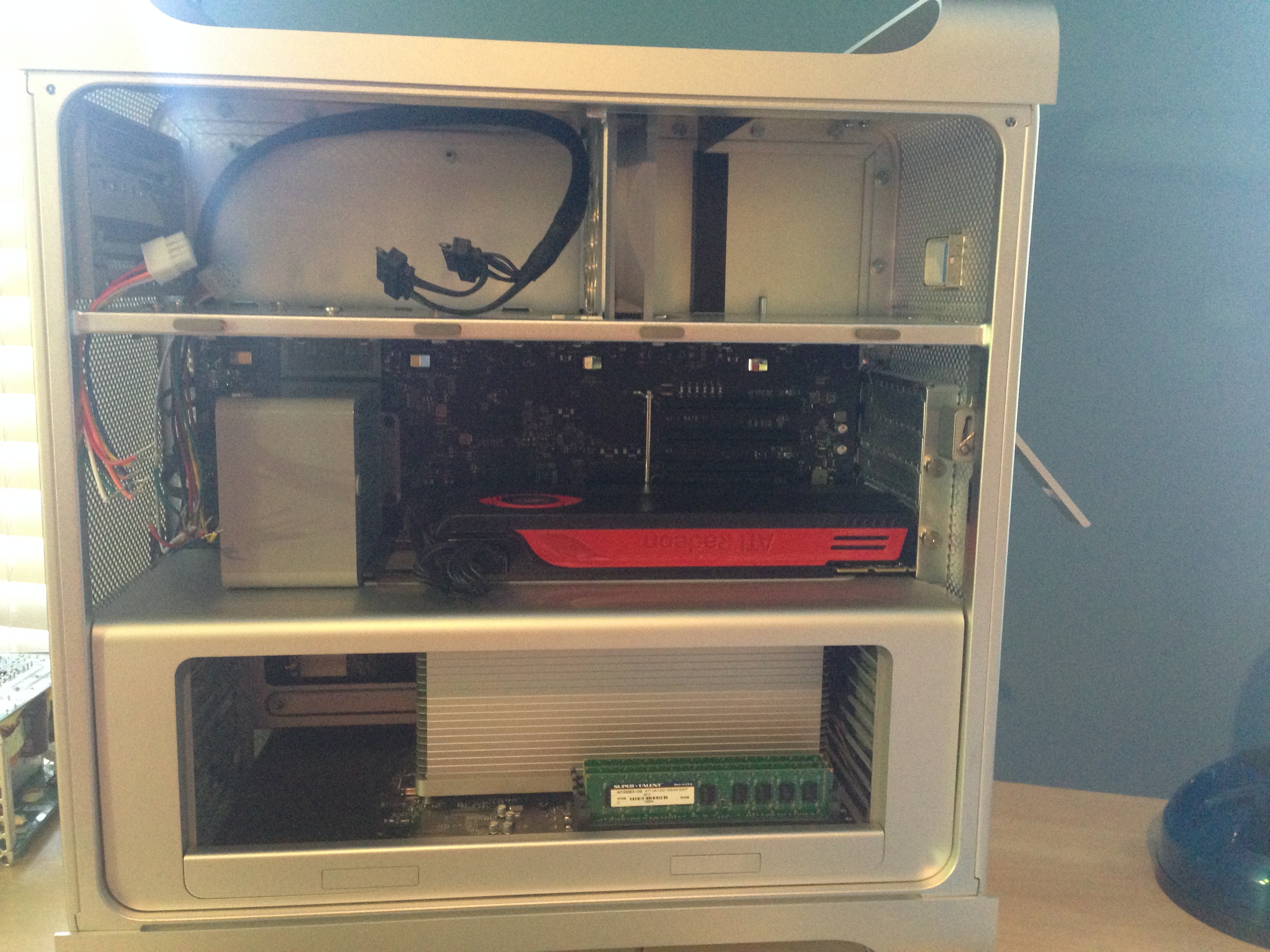 Next, either cut the EPS extension cables down the middle or extract the pins from the female connector. If you cut the cable, strip the ends of all wires where they are cut. There are two gaps between the front of the Mac Pro and the plate supporting the optical drive; thread one set of cables through the gap in front, and one set of cables through the gap in back, as shown in below image. Make sure the male connector is where the optical drive was. 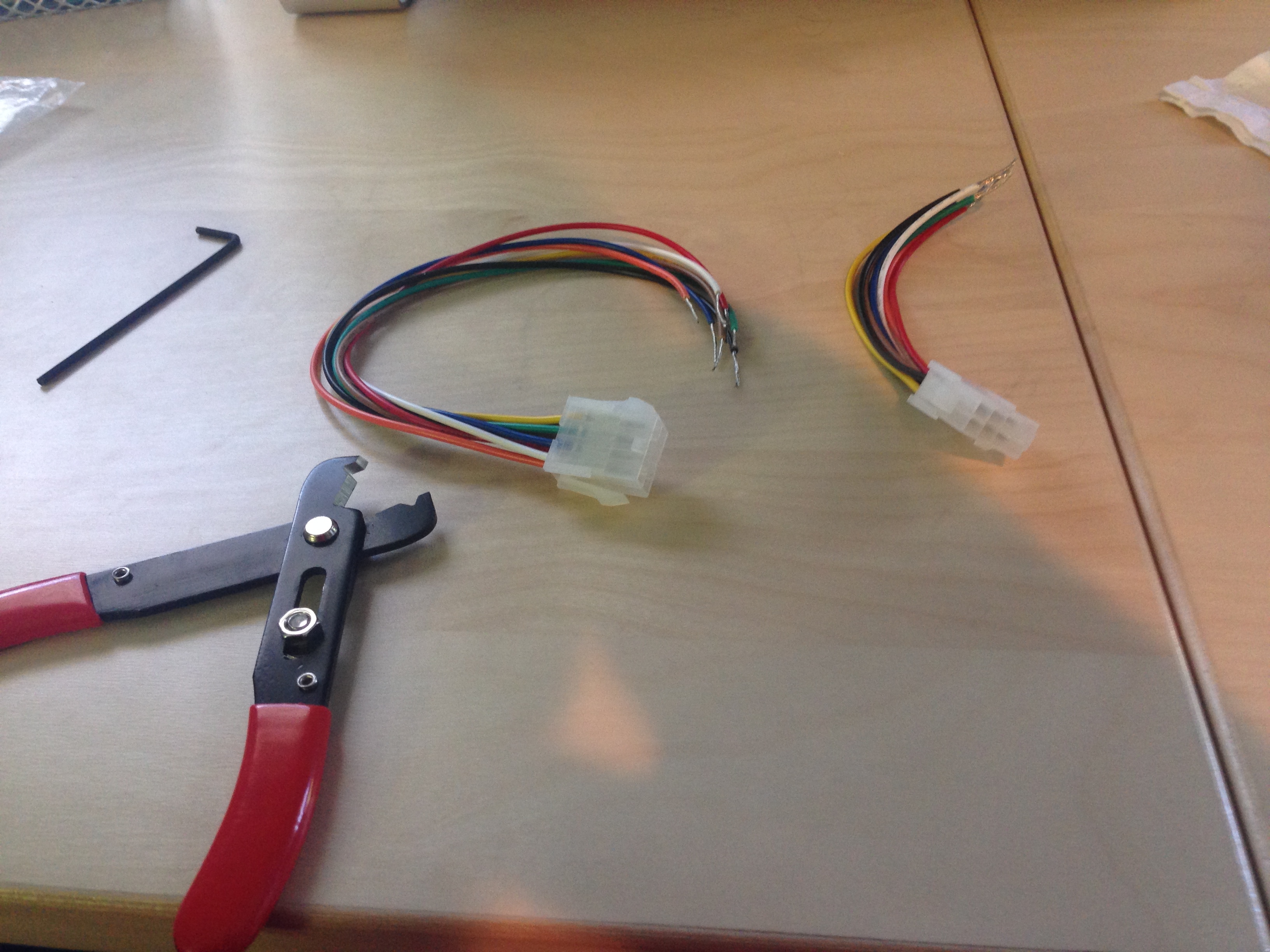 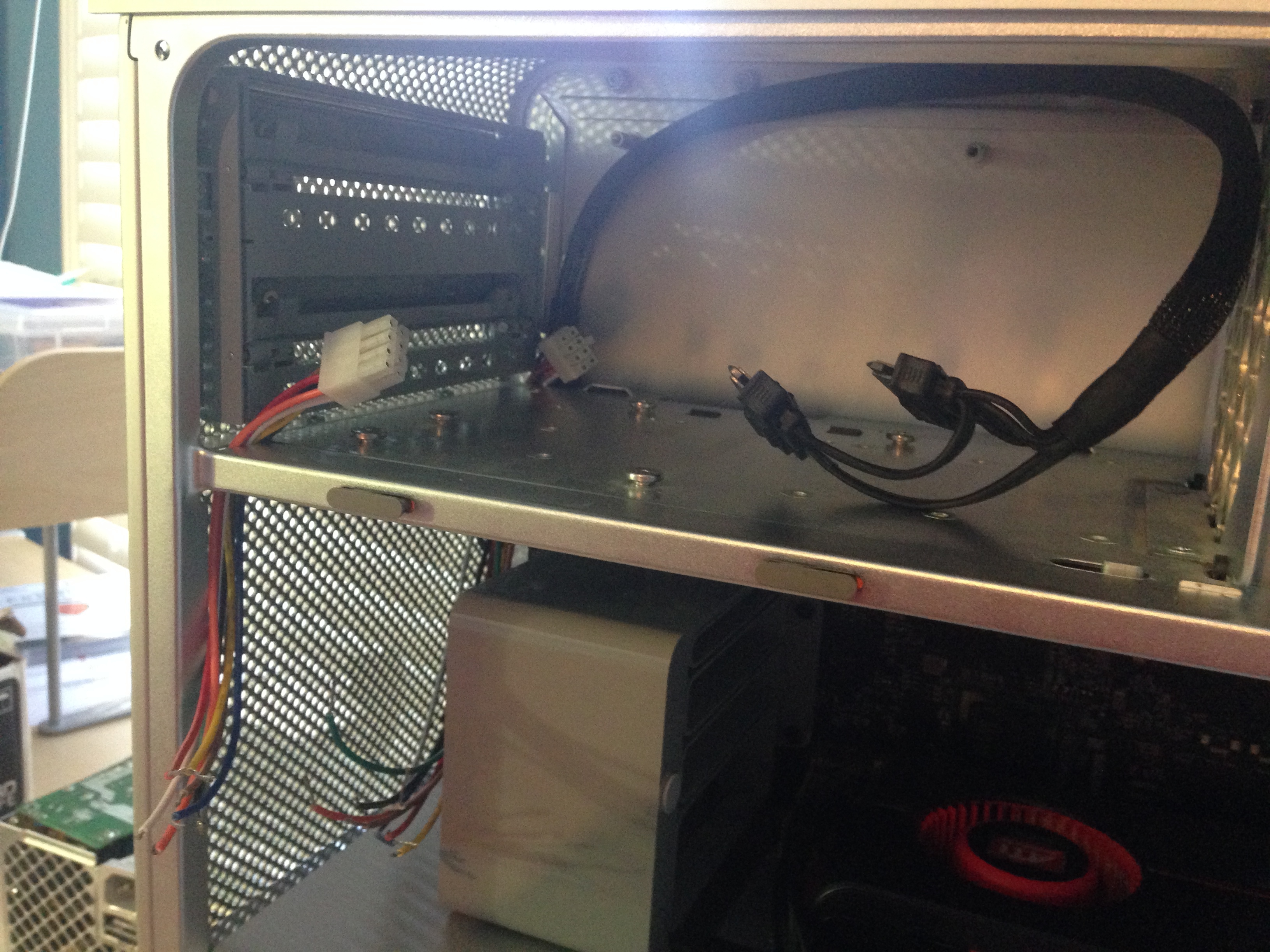 Now, slide the auxiliary PSU into the space below the optical drive. Take its power cable, cut its plug off, and strip off the sleeving and then the ends of the wires as shown. Note which cable goes to hot/line, which goes to neutral, and which goes to ground in the AC outlet. This can be found using the multimeter to check continuity between different color wires and prongs of the plug. Finally, plug the Aux PSUs power cable into the aux PSU, and route the cable out the back of the assembly through the space between the aux PSU and the optical drive. Also plug the molex to molex extension cable into the aux PSU. The final setup is below. 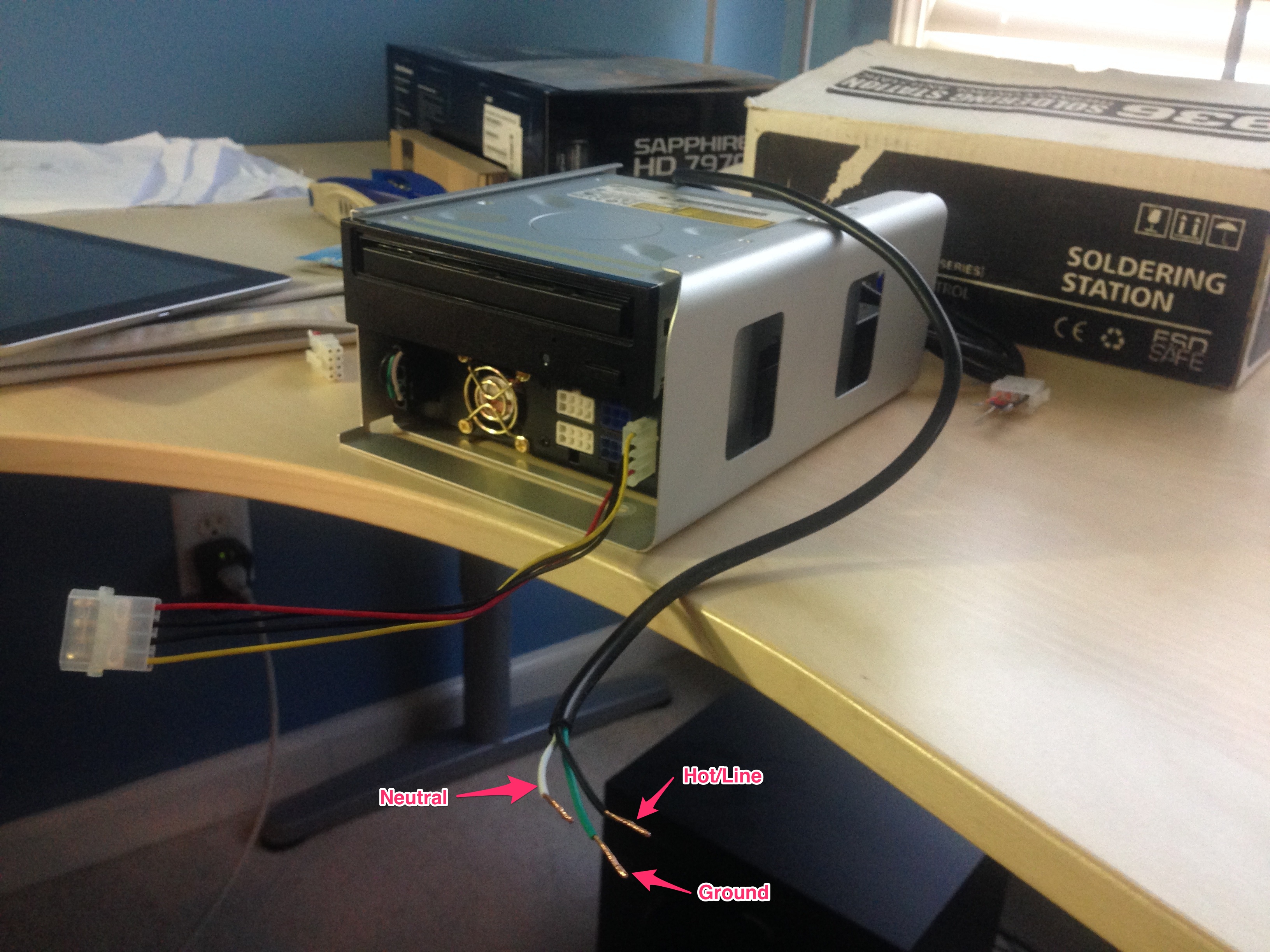 Now, take the main PSU and remove all the screws that are on its exterior. Also, there is a felt lining around the white AC cable receptacle; pull this off as well. Now, remove the side plate from the PSU; note that there is a cable now visible which goes from the top half of the PSU to the bottom half. Next, pull the top and bottom halves of the PSU apart, and lay the top half down and the bottom half on its side. Take care to disconnect the cable which was seen earlier as you pull the PSU apart. You may also have to cut part of the thin plastic plate that goes between the top and bottom halves. After this, the PSU should look as shown below. 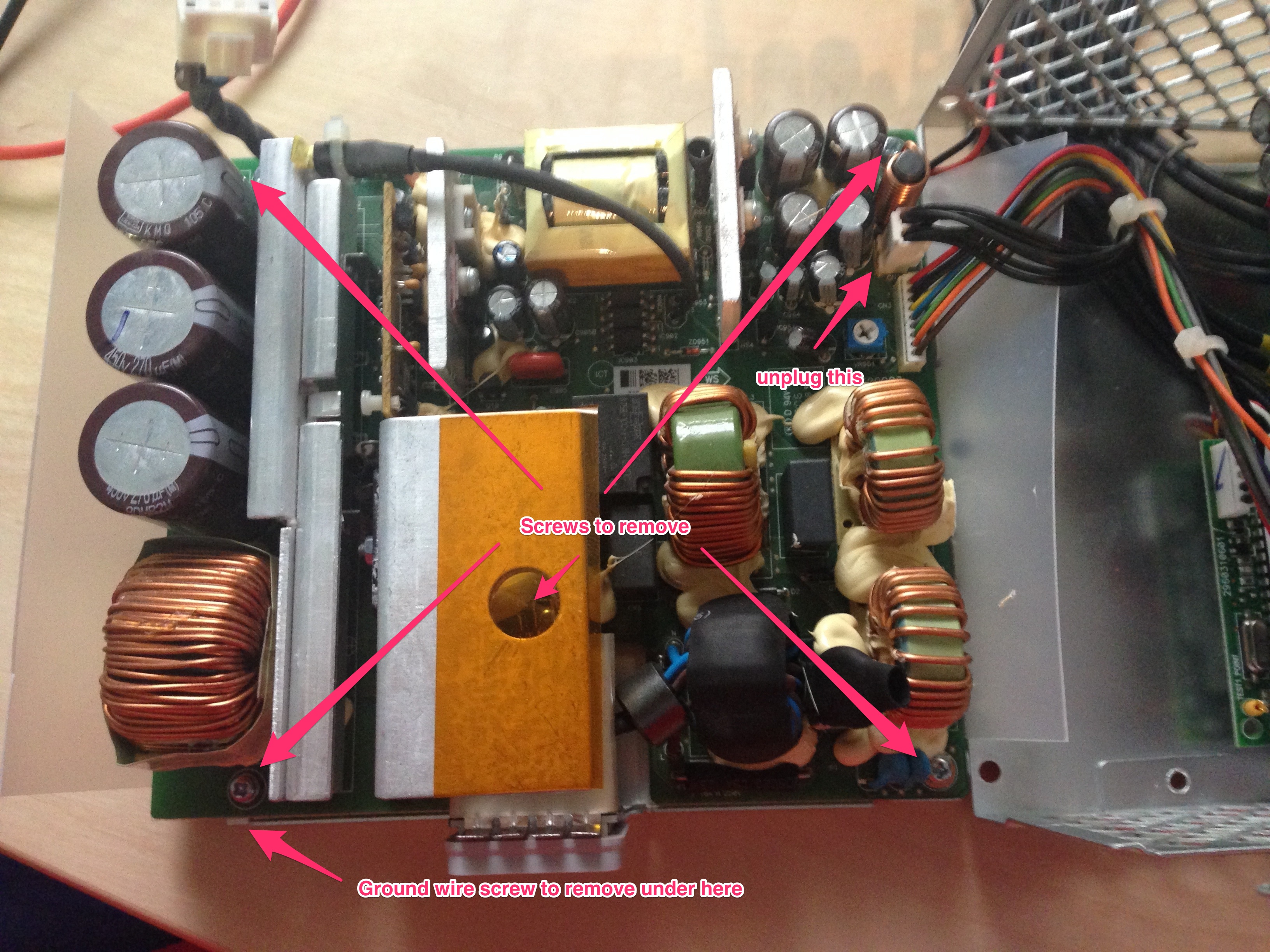 As shown in the above picture, unscrew the five screws depicted, and also unplug this connector on the top right in the picture. Also unplug the screw on the bottom of the PSU which holds down the ground wire. When this is complete, lift the green circuit board off of the aluminum housing, flip it, and set it on top of the top half of the PSU as shown below. 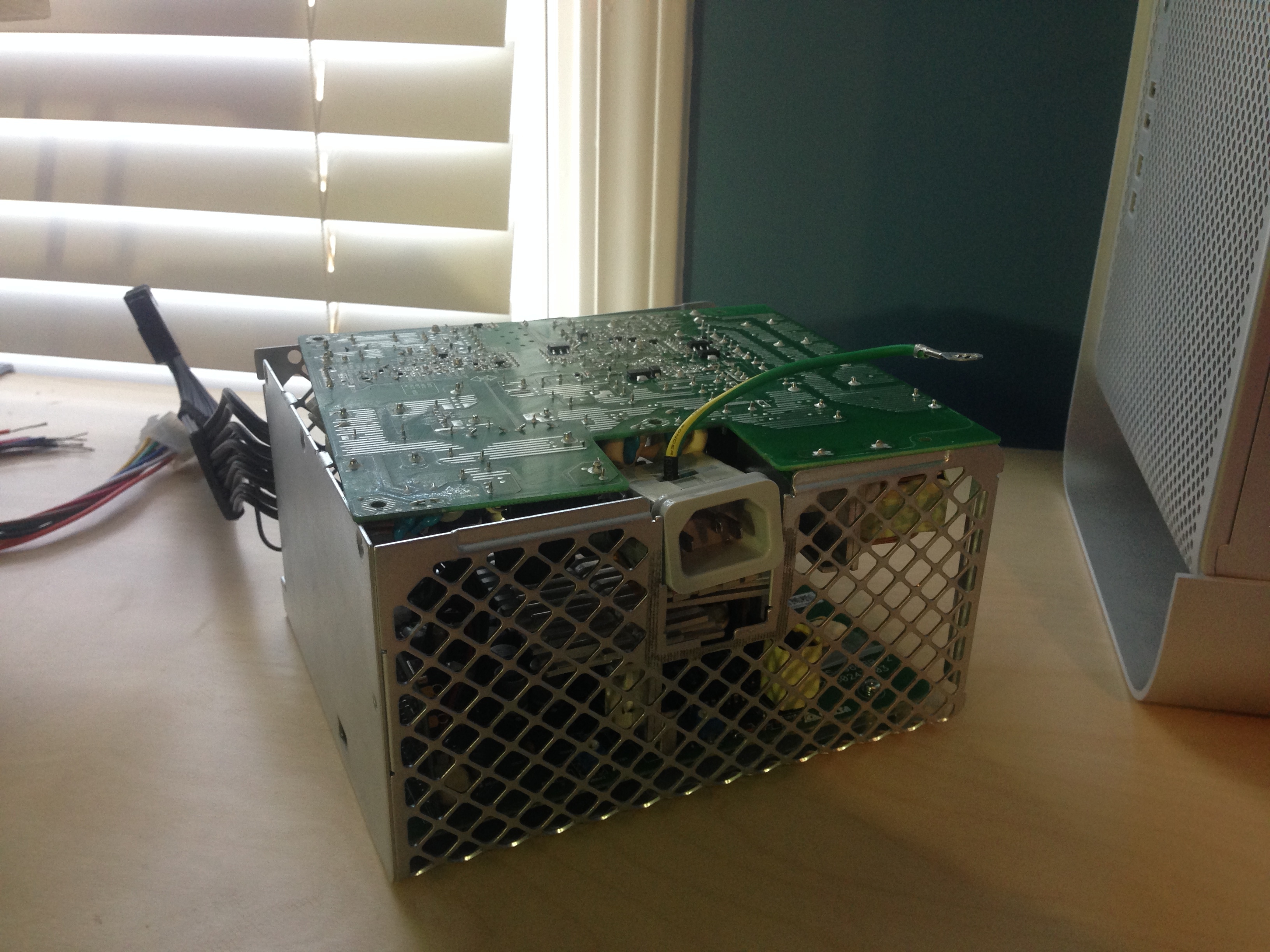 Now for the fun part. Were going to draw the AC power for the auxiliary PSU straight from the main PSU, off of the 120V/220V leads. For this, take a an 18 inch piece of hookup wire, and strip the ends. Now, note the two little nubs sticking out shown in the below picture. One goes to the hot/line prong of the AC plug, while the other goes to neutral. Take the stripped end of the wire, curl it into a loop, and put it around one of them; note whether this cable is hot/line or neutral (I just used a black cable to signify neutral and a red cable to signify hot). 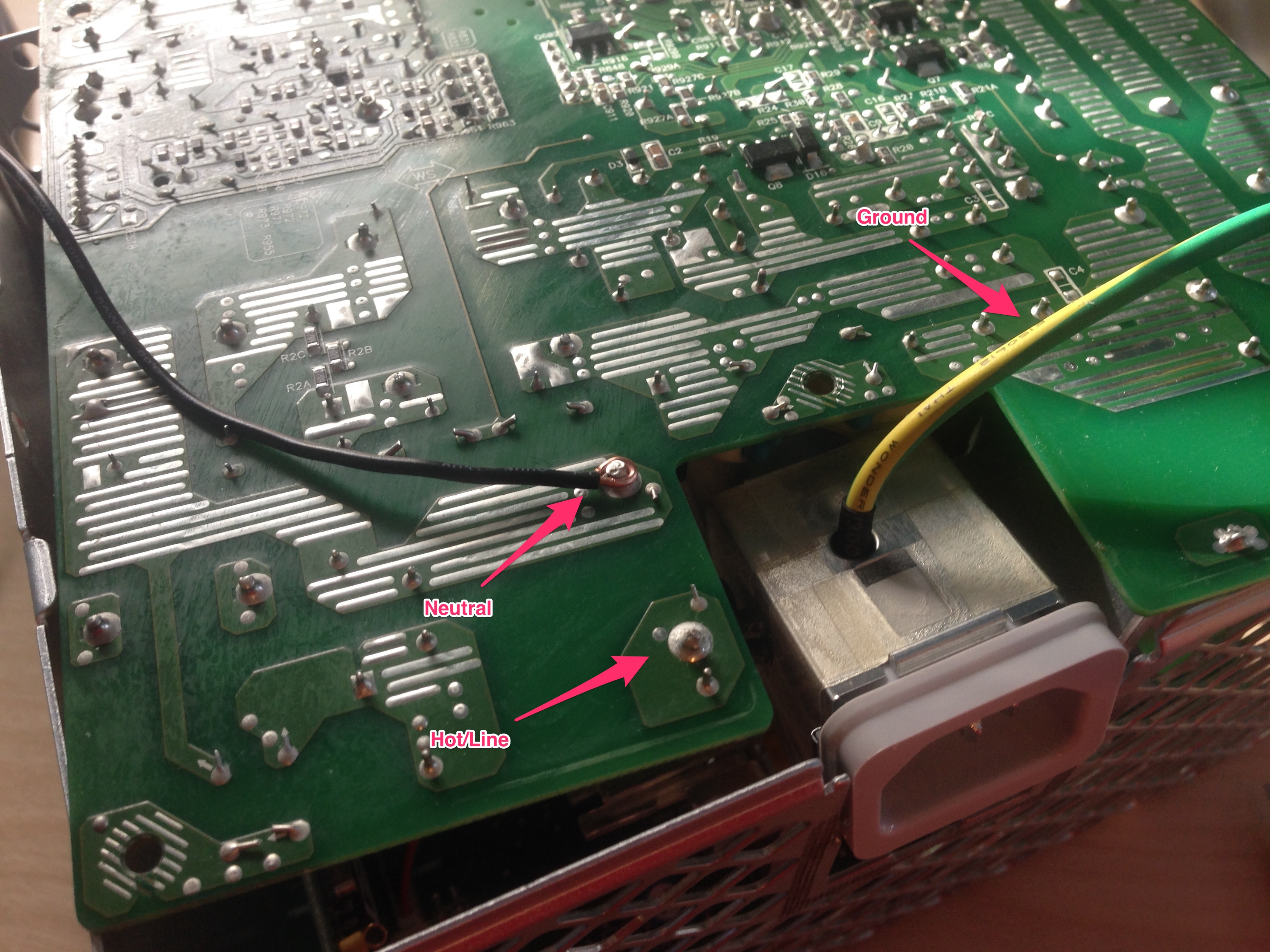 Now, solder the loop onto the little protrusion, and do the same with another piece of wire and the other protrusion. The final setup should look like is shown below. Keep in mind which wire is hot and which is neutral. Also, if you have one, use the multimeter to test continuity from the hot and neutral prongs of the white AC plug and the free ends of your soldered wires. 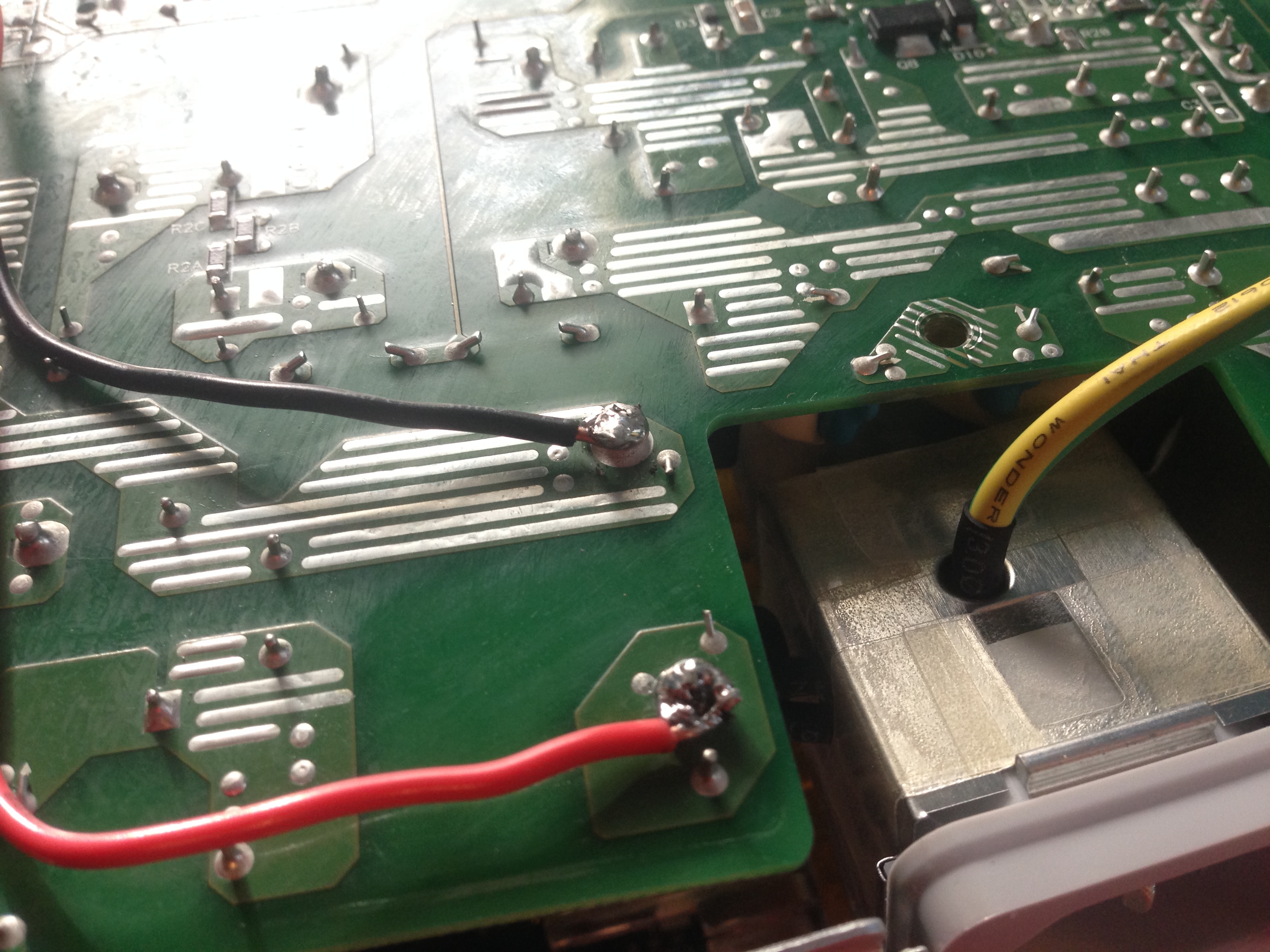 Now, close the main PSU back up, just following the reverse of the steps used to disassemble it and making sure to screw the ground wire back in, and reconnecting all the cables that had been disconnected. Thread the two new wires out alongside the other cables that come out from the PSU. Also, use the pliers to twist off the small square piece of aluminum depicted below; otherwise, it could cut into your wires. I had to eventually do this. 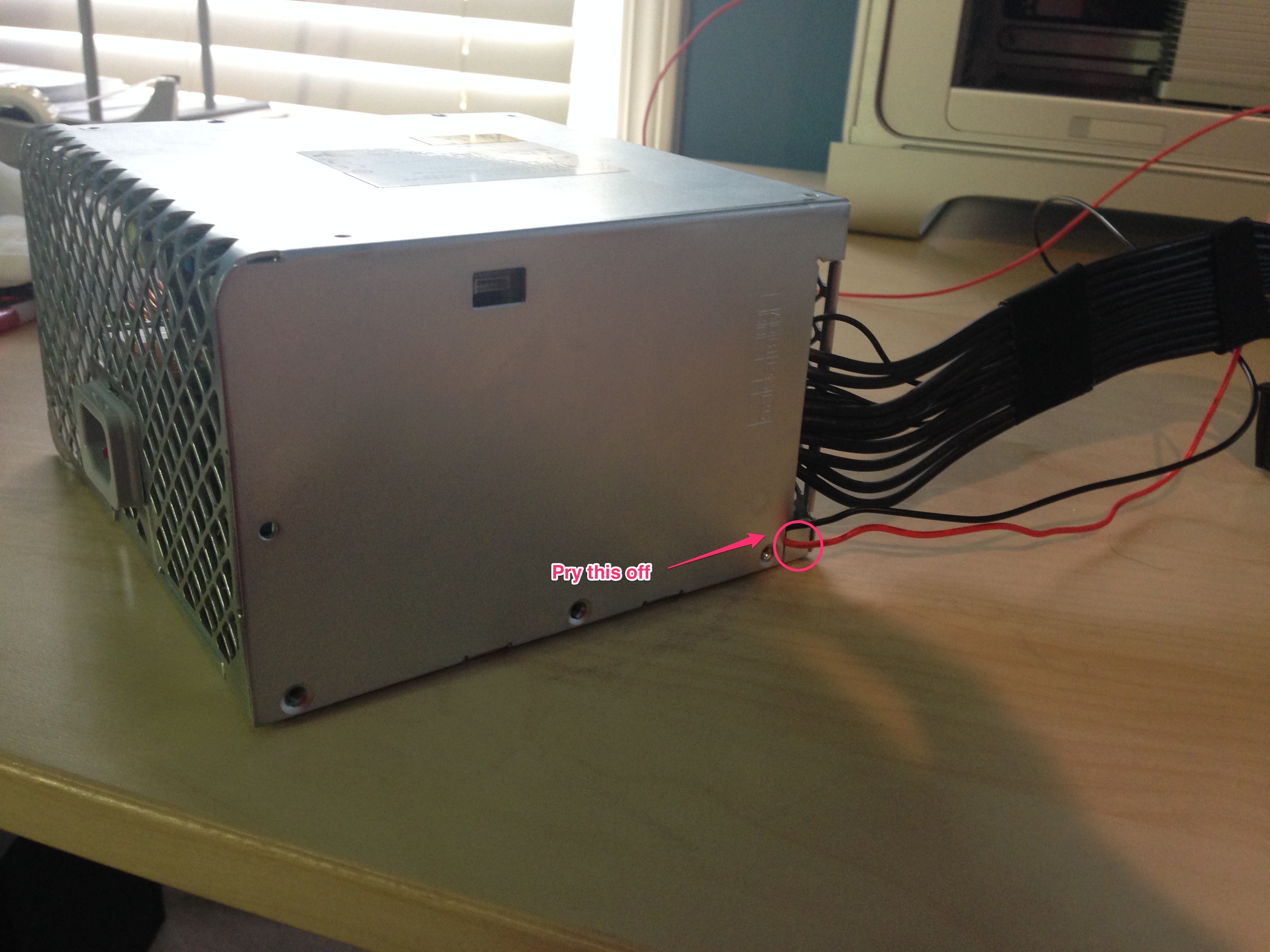 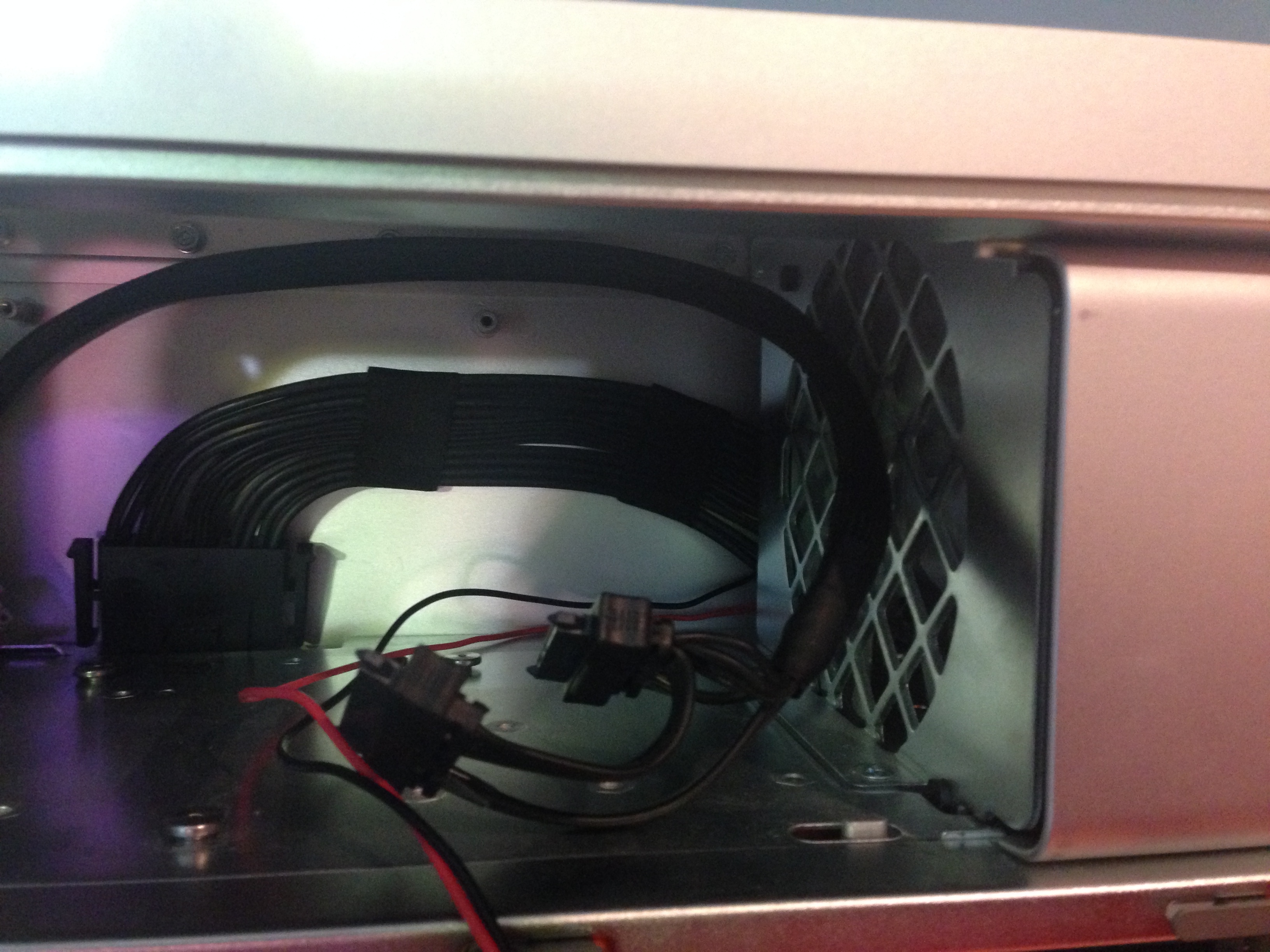 Now, concentrate back on the EPS extension cables. With the free ends of the wires on the same side as the GPU, we need to reattach the female connector to these wires. If you used a pin extractor, simply reassemble the connector. Otherwise, solder the appropriate wires together here, as depicted below. I soldered since I didnt have a pin extractor and I couldnt get the staple trick to work (killed a cable trying), but if possible pin extraction is a better option. My cables were color coded, so it was easy to see which two cables to solder together. 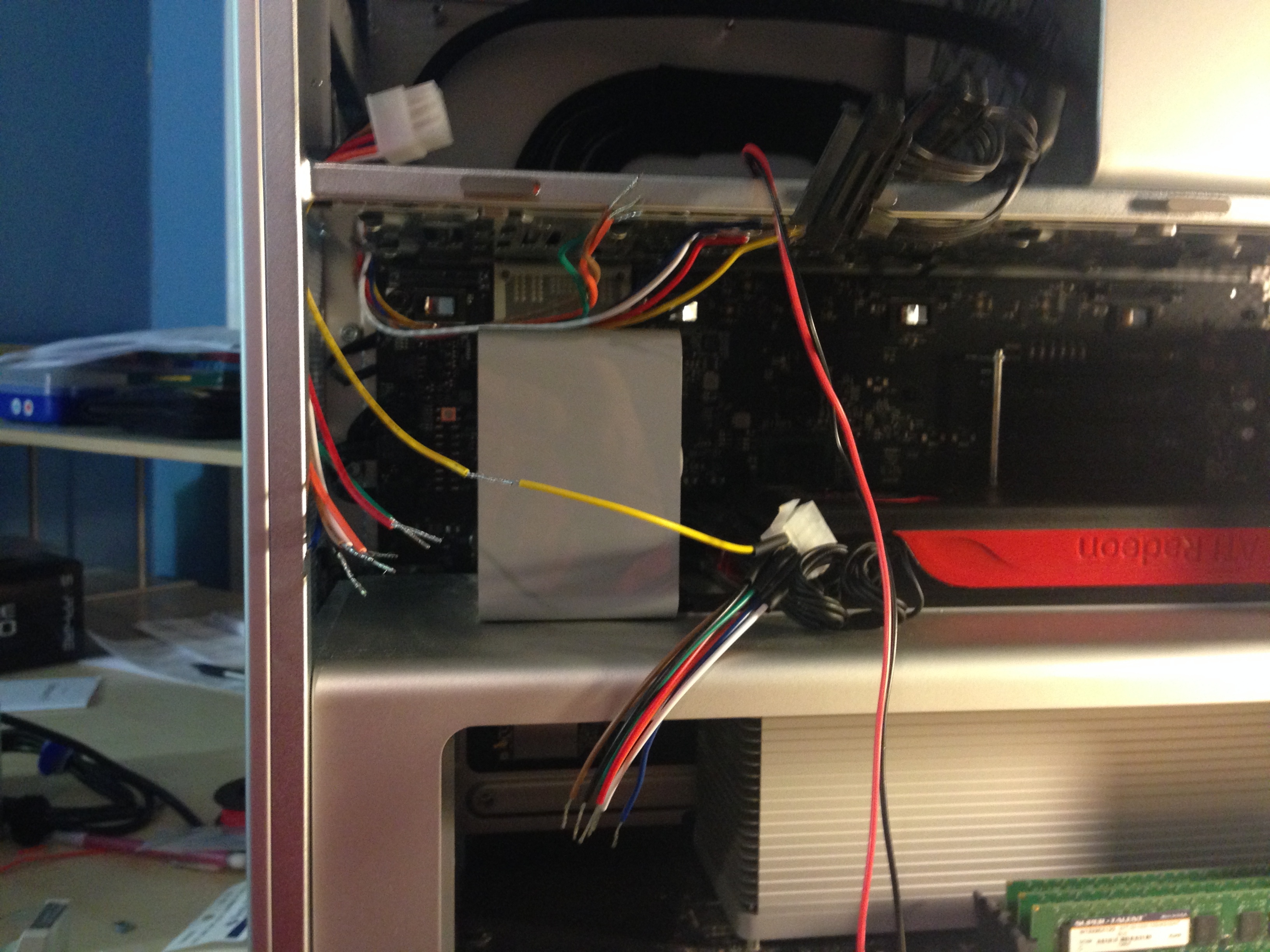 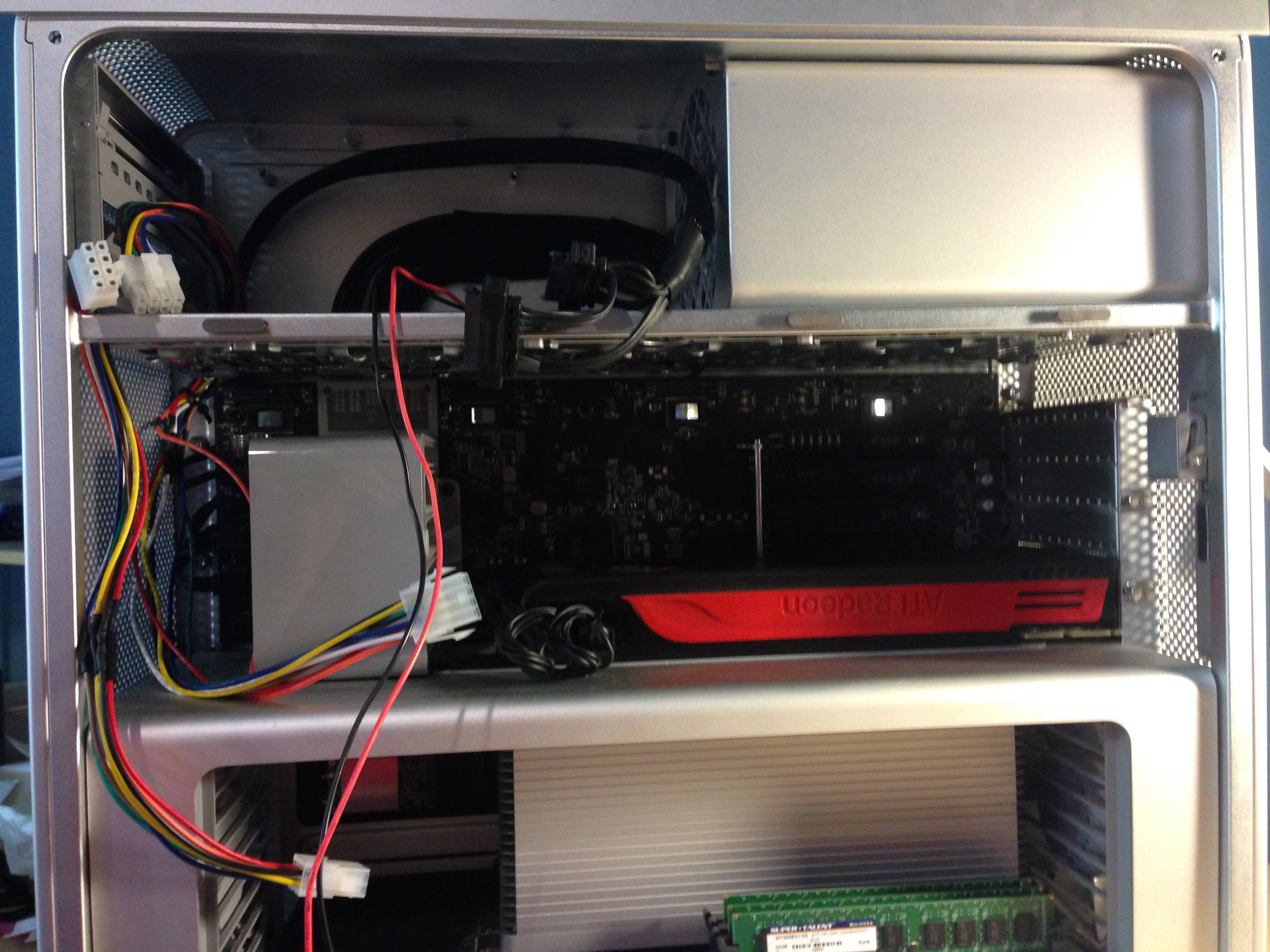 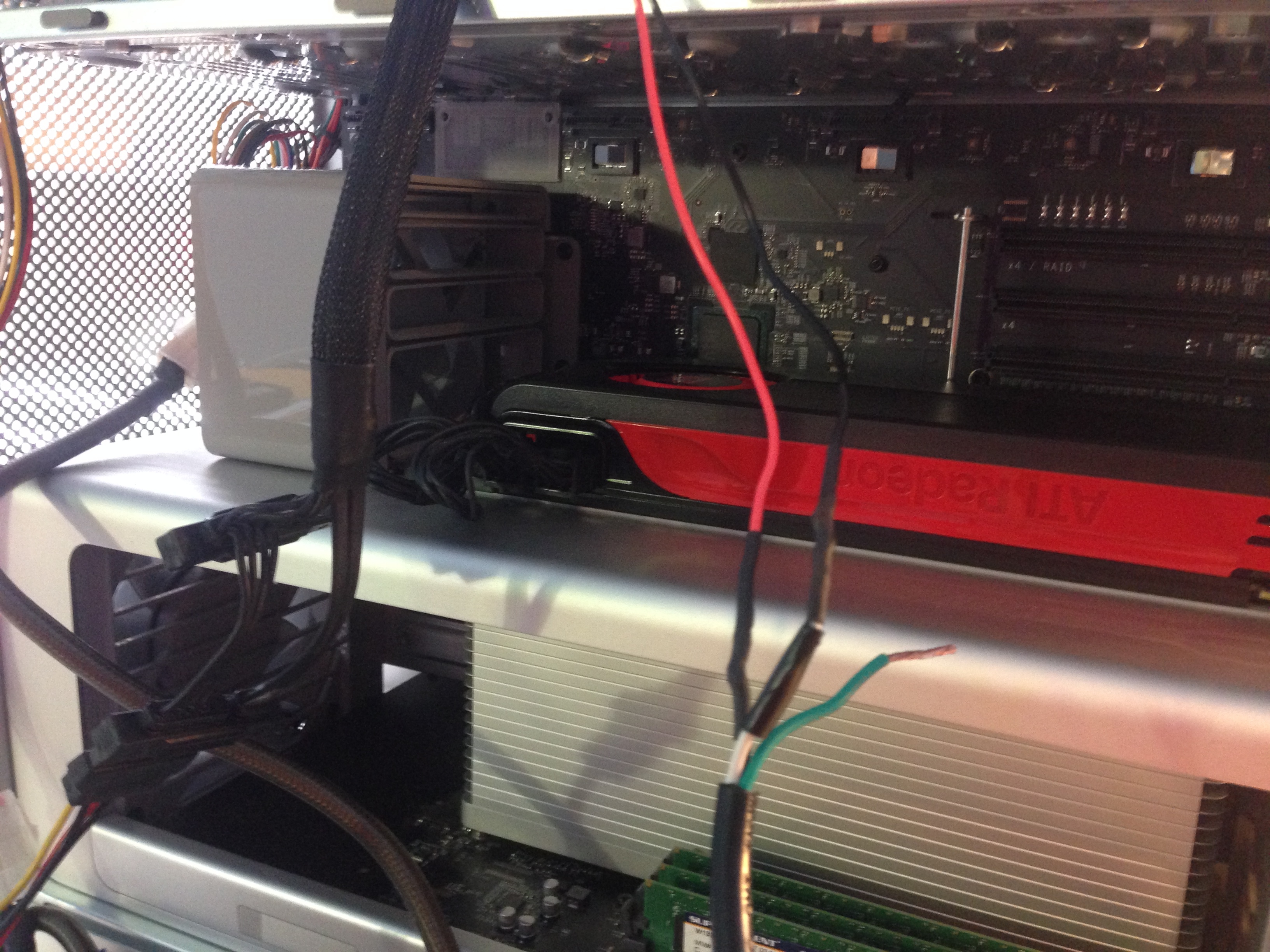 For the ground wire, attach the ring terminal to its end and crimp it with a crimping tool, if you have one, otherwise pliers and electrical tape should suffice. Unscrew one of the screws holding the main PSU fan down, and screw the ring terminal down under it as shown below. 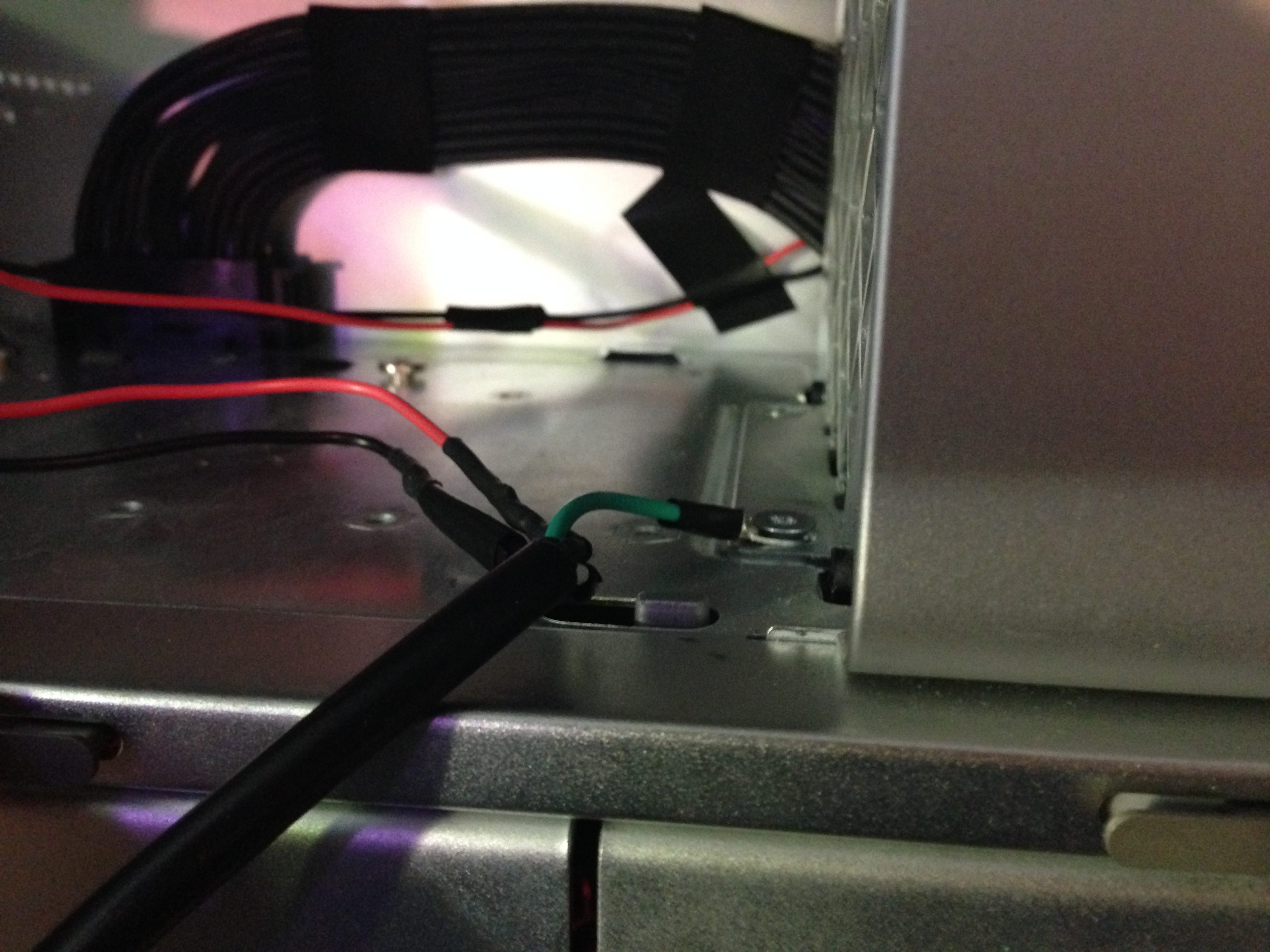 Now, we can test the setup. Attach the SATA to molex adaptor to the bottom SATA port on the optical drive SATA cable, and attach the molex end to the extension cable coming from the auxiliary PSU. Attach the EPS to 6+2 pin cables between the auxiliary PSU and the existing GPU (a 5870 in my case), and now just leave it all open, plug the Mac in, and turn it on. 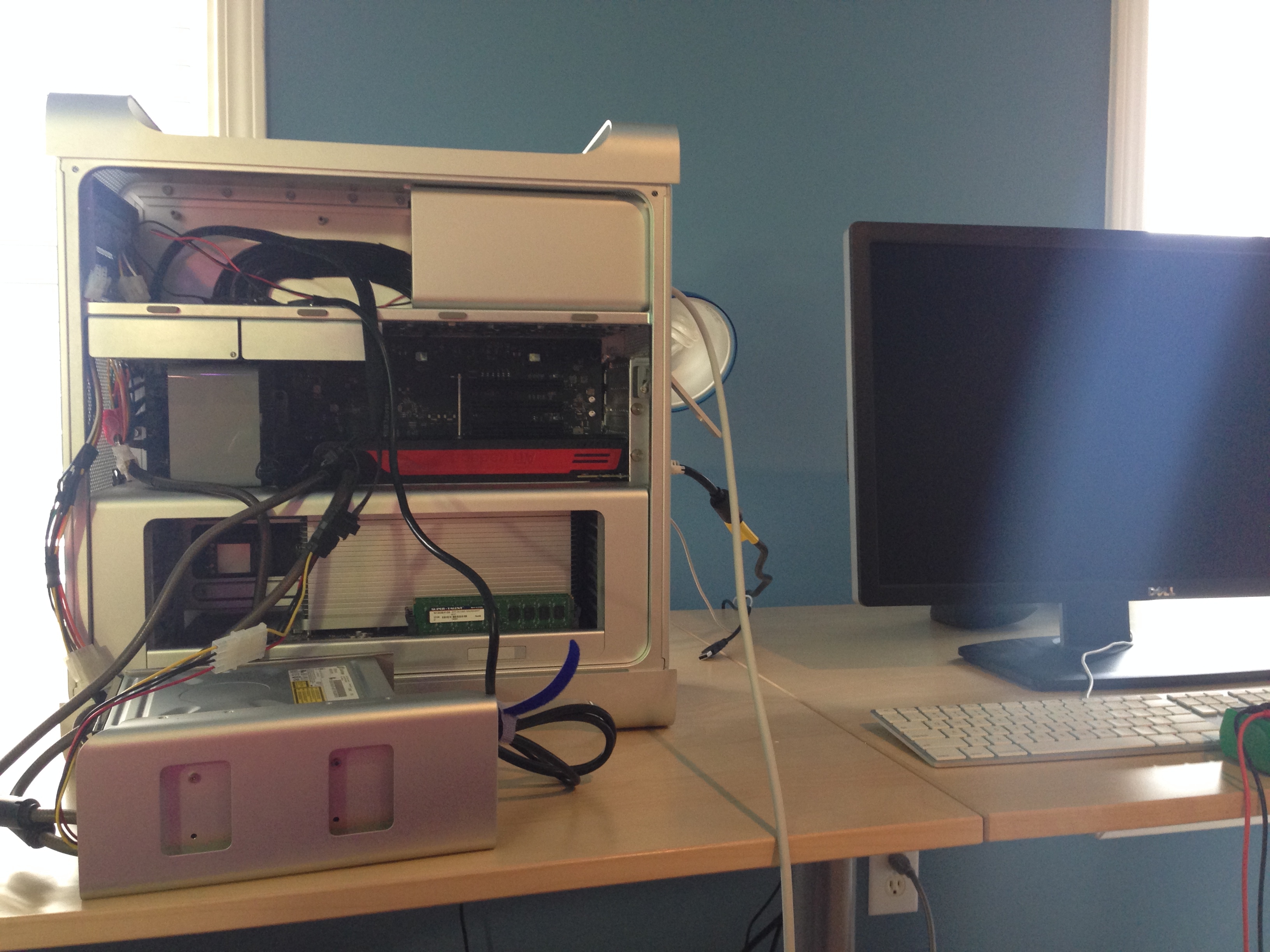 If all this worked, its time to close it all up. Shove as much of the aux PSU power cord as you can into the space between the optical drive and the aux PSU. Also, I pushed the SATA to molex and molex extension cables through the space on the side of the drive bay enclosure, as shown below. Then carefully, making sure that there are no cables in the way, slide the entire enclosure into its place in the Mac Pro, plugging in the EPS cables to the aux PSU as you go. 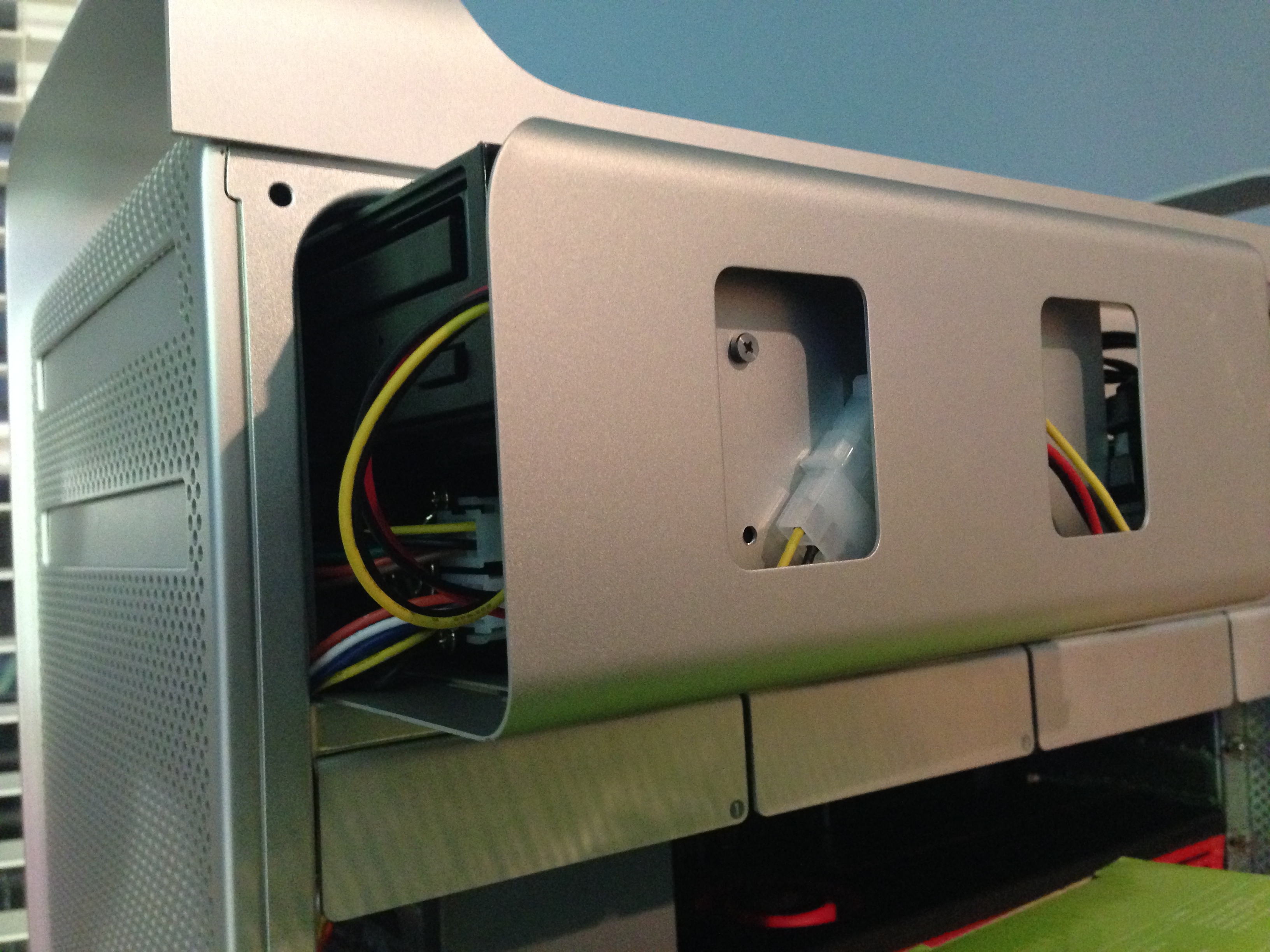 Now just attach the EPS to 6+2 pin cables to the EPS female connectors from the extension cables, and bunch up the cables with zip ties or velcro cable straps. Reinstall the hard drive. If you want, test the entire setup with the old GPU again. Finally, install the new GPU as detailed in the service source, plug it into the 6+2 pin cables, plug it in, and turn it on. 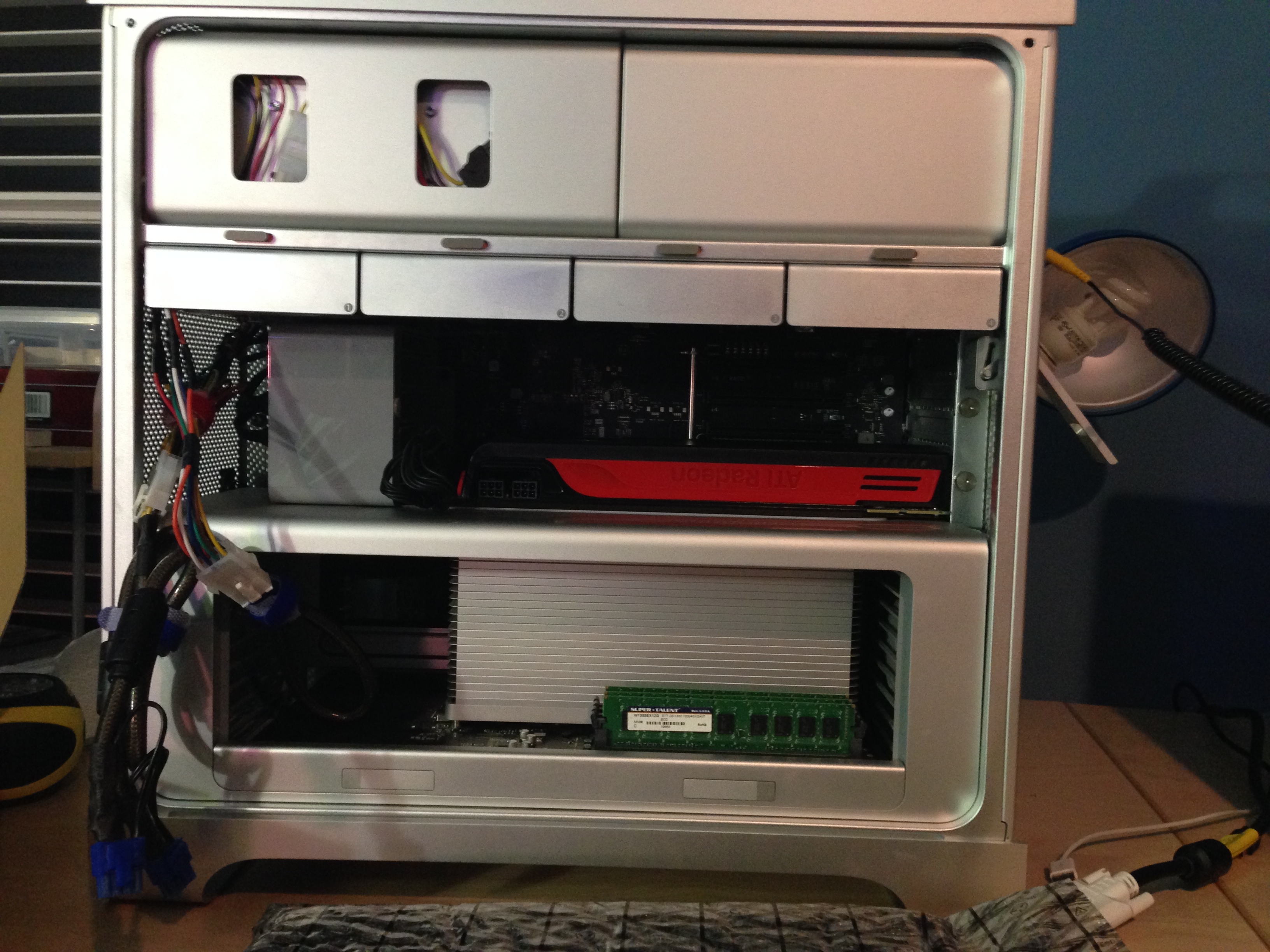 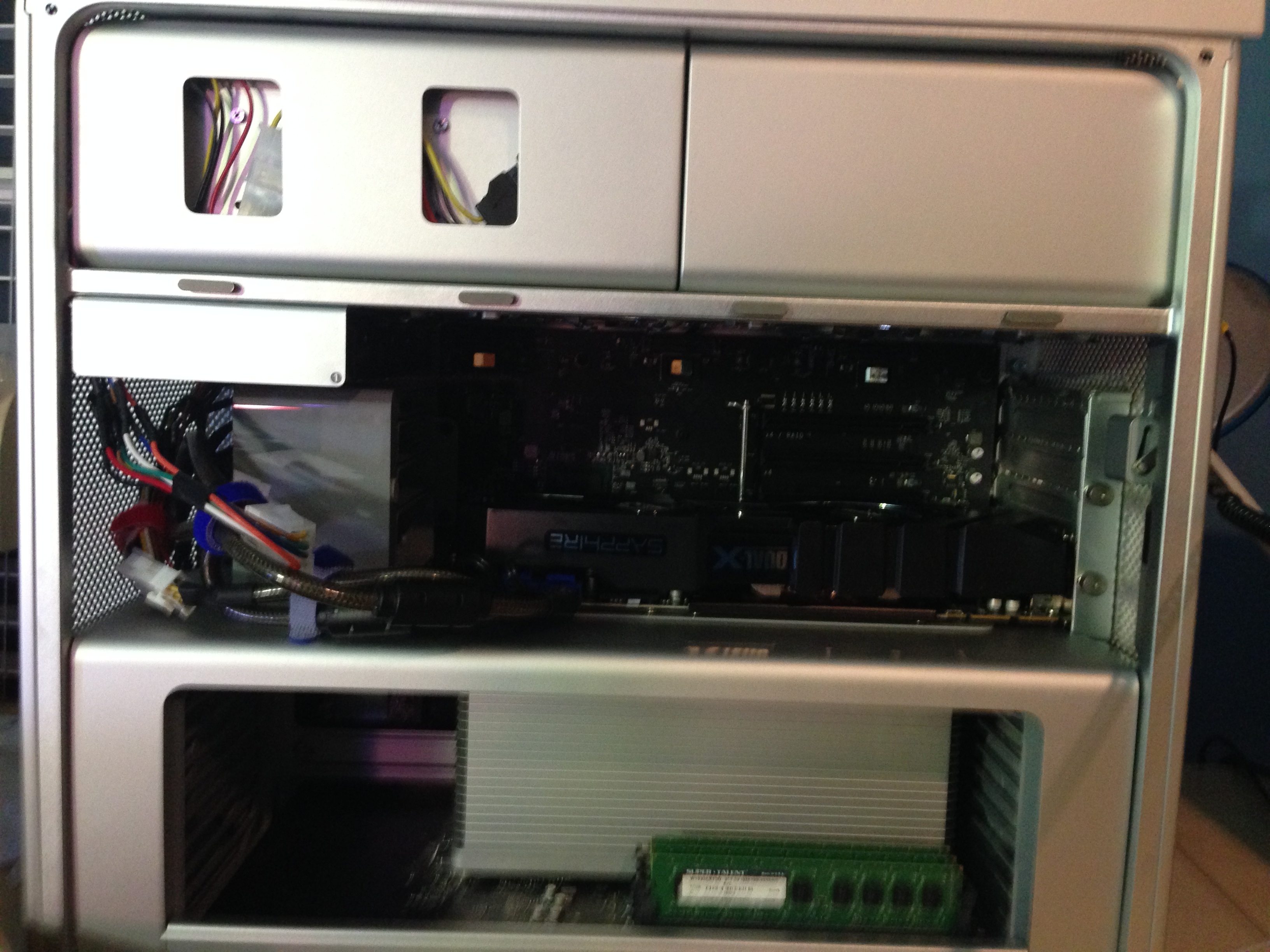 Wait a few seconds (remember, no EFI yet, so no boot screen), hold your breath, and thenSUCCESS! Assuming you did everything correctly, it should all work now! 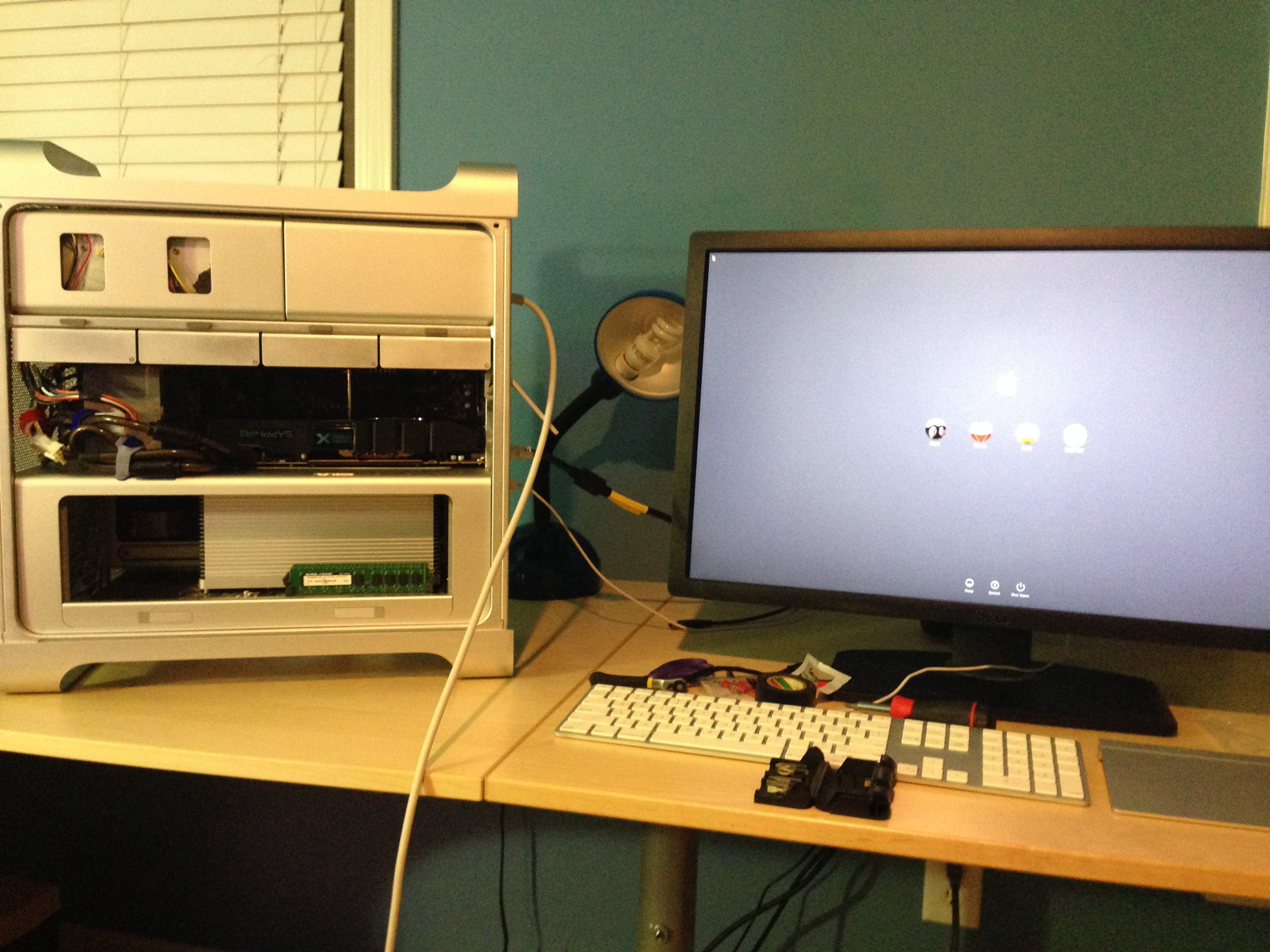 Well, this all was quite a project, but its been going for two weeks now, and has handled whatever Ive thrown at it, so it all seems to be working well. Hopefully this guide will help someone else find all the exact supplies and preparation required before they embark on the same project I did.
Last edited: Dec 14, 2013
Reactions: theoamoretti and Synchro3

One question, did you turn the fans around in the auxiliary power supply?

One question, did you turn the fans around in the auxiliary power supply?
Click to expand...

I did not open the PSU to turn the fans around; I have the fan opening pointed towards the front of the case (so if you slide the bottom optical drive bay door open, you can see the fan). According to

by default two fans blow into the unit, and the last one blows out of the unit. Do you recommend flipping the fan to blow inwards? That doesn't sound right to me, but the PSU has been getting awfully loud under load.

I think this makes sense because all the air flow would be moving in the same direction, from front to rear.

Also, just to clarify, when you say the PSU has been loud under load, are you referring to the auxiliary unit or the original power supply?

I think this makes sense because all the air flow would be moving in the same direction, from front to rear.

Also, just to clarify, when you say the PSU has been loud under load, are you referring to the auxiliary unit or the original power supply?
Click to expand...

I was referring to the auxiliary PSU fans being loud under load.

Also, yeah, I do remember another guide (it was Dr. Stealth) flipping the fans before installation. He was using the FSP Booster X5, which has fan grills on both the front and back of the PSU. So, flipping the fans would make it blow air out the other grill, towards the back of the Mac Pro. Unfortunately, the one I have has a fan opening only on the front; there are no grills on the back (the side pointed towards the main PSU fan), as shown here:

Ah. I see. It didn't occur to me that the two auxiliary power supplies were different models.

In this case, I don't know if reversing the fan would help.

Very nice writeup. I kinda wished I did actually tie into my main PSU to power the aux PSU instead of drilling for a mini 120v socket. When I first did mine, I took my main PSU apart and didn't want to mess with soldering on the wires

I'll see if I can get the ebay member's name that did the custom cables for me. That way you can flip the aux PSU in the right orientation. Even under load, it's not loud anymore.

Which is the order of the cables on the aux PSU input from wall? There are two squares and one round at the end.

Yosmac said:
Which is the order of the cables on the aux PSU input from wall? There are two squares and one round at the end.
Click to expand...

Mango, Thanks for your reply. It gave me additional Ideas, I had no time to reply because I was mostly working inside te chassis the last two weeks. I finished keeping the idea of the aux PSU because I needed not only the connectors, but more actual power. I tested before drawing all the power from the original PSU and it collapsed under full workload.I finished the assembling today. I will let you know as soon I prepare the post with details.
Thanks again