If you have a Retina Macbook Pro that's a few years old, replacing the thermal paste is one of the best, easiest, cheapest and quickest upgrades you can do. It's the best $10 I ever spent on this thing. I got the thermal paste pictured below for $10 on Amazon.

See below - the original thermal paste was in awful condition (way too much / all over the place, but had caked and lost contact over a lot of the dies), and when CPU load ramped up, the fans would spool up to top speed (the sound was noticeable). CPU temps got over 200 degrees F, and the GPU got well into the 168-175F range.

Fortunately, the heatsink is on the bottom of the logic board - only a handful of T5 screws and it pops right out.

Temps didn't go down THAT much, but OMG THE FANS! SO much more quiet doing the same type of thing. Love love love it. FYI: My fans had been blown out recently, so they weren't that bad. Idle CPU/GPU temps are 97-101F, and up to 200/165 under load.

Launching VMWare Fusion with Windows 10 build 1903 would spool up the fans to 100% - now it's literally half that and so quiet. This whole thing took 15 minutes. 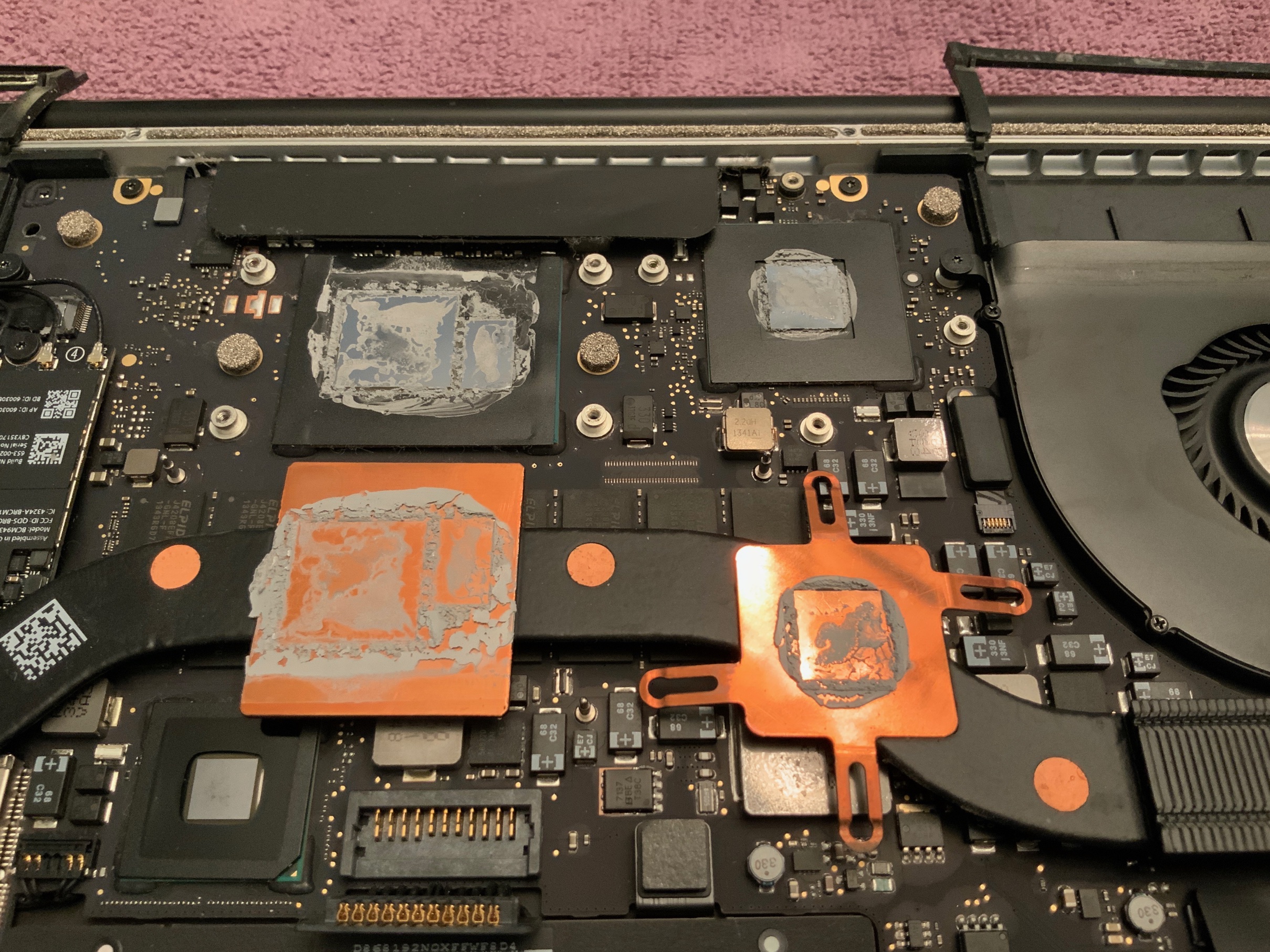 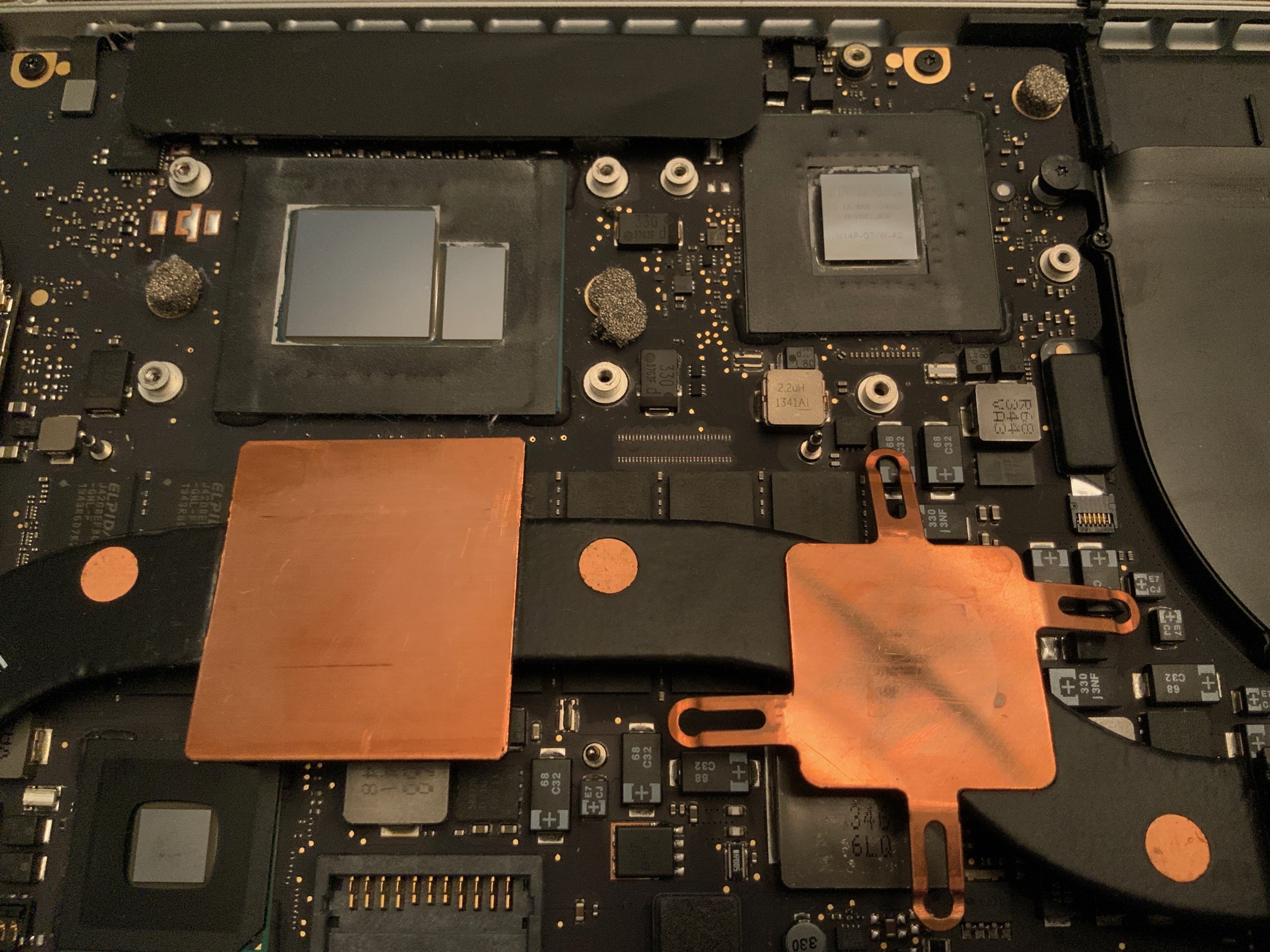 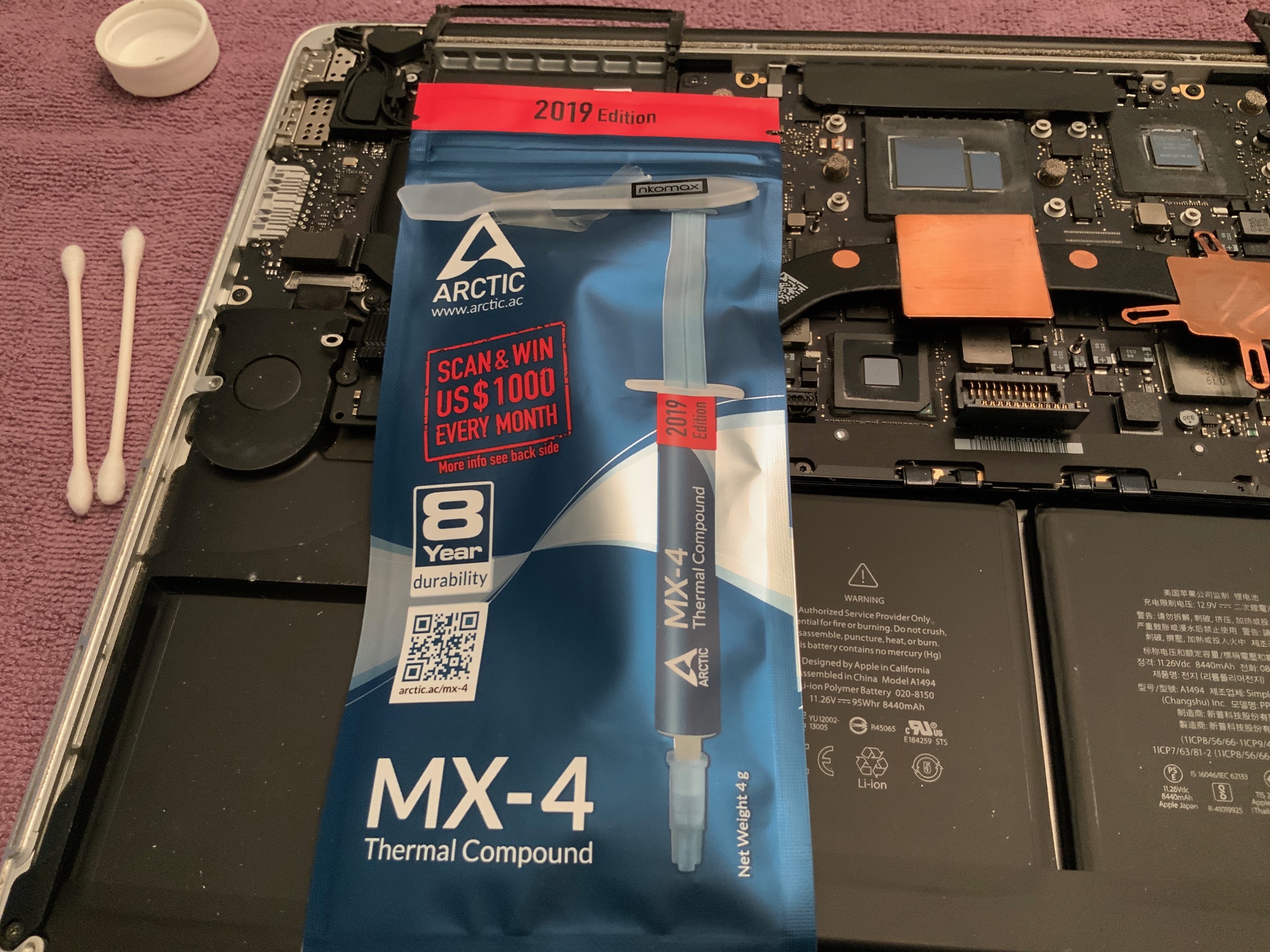 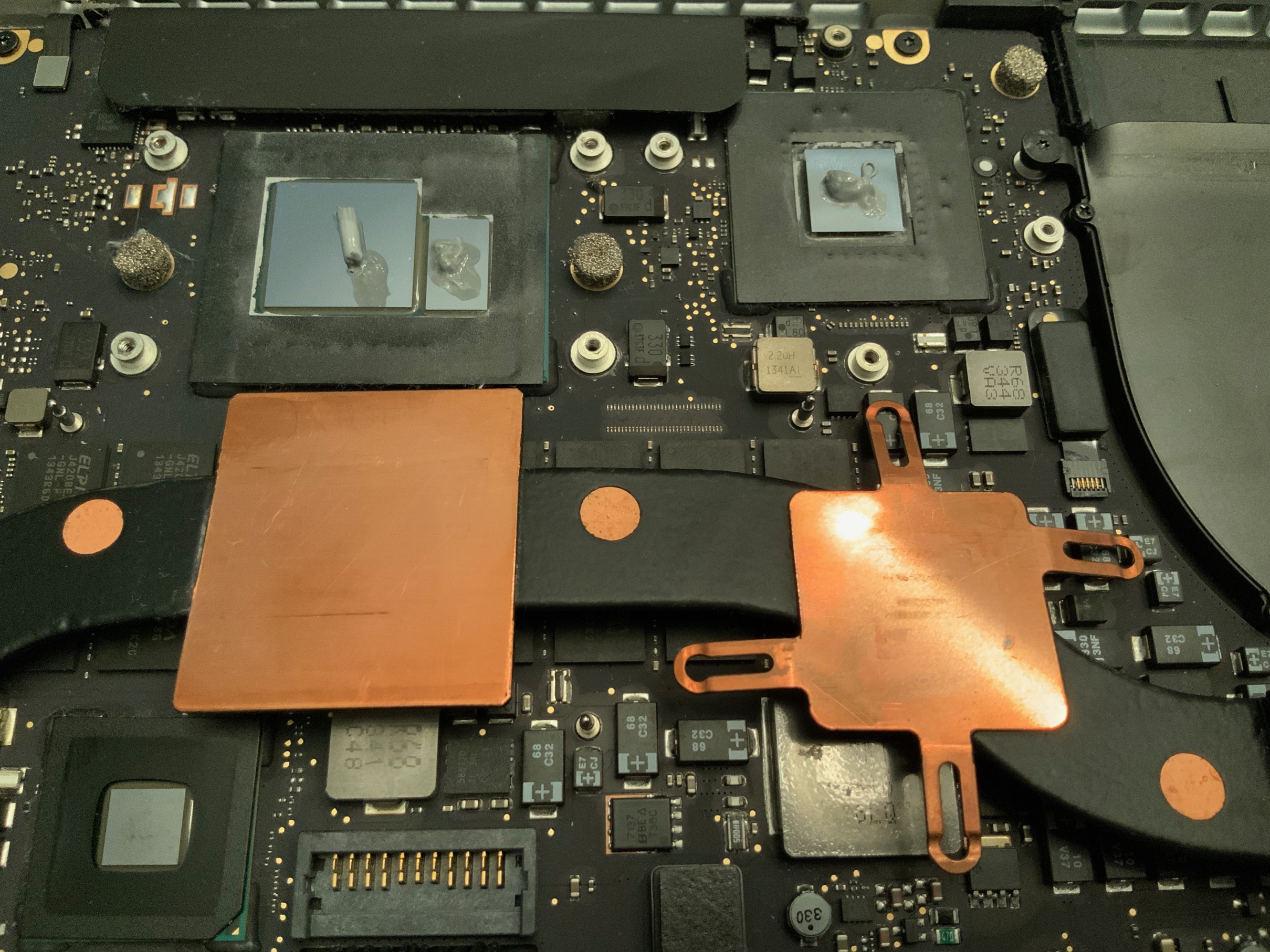 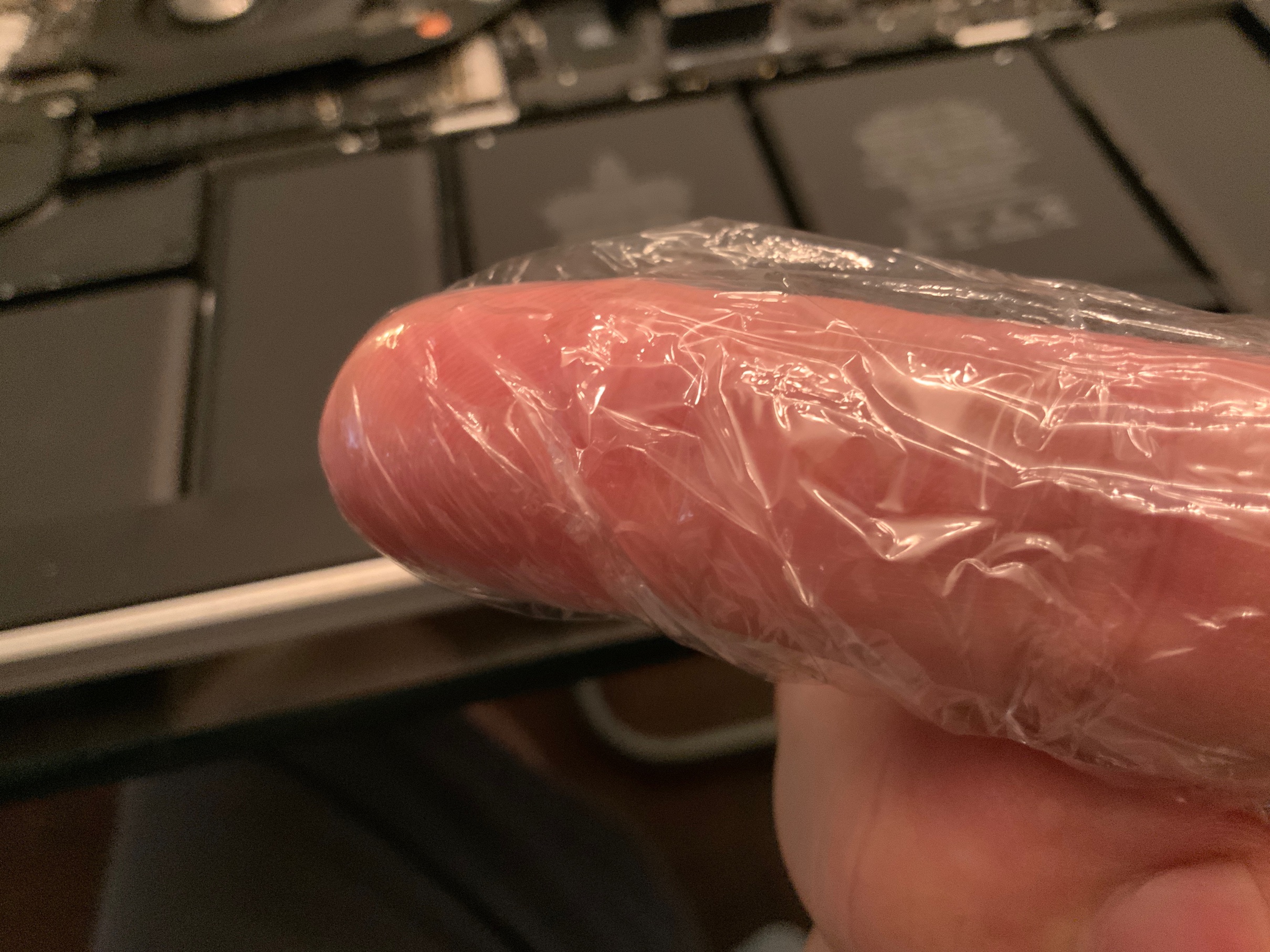 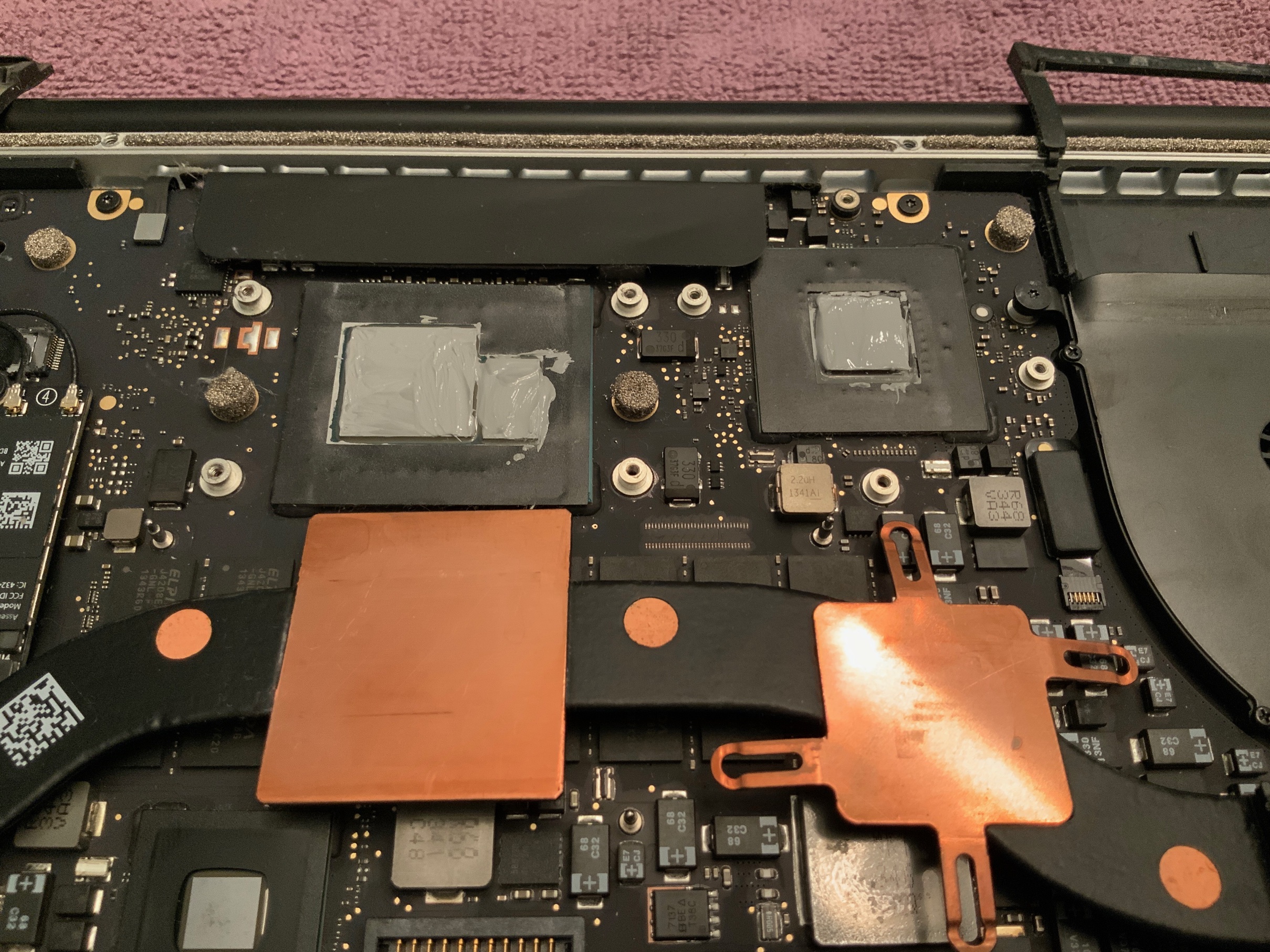 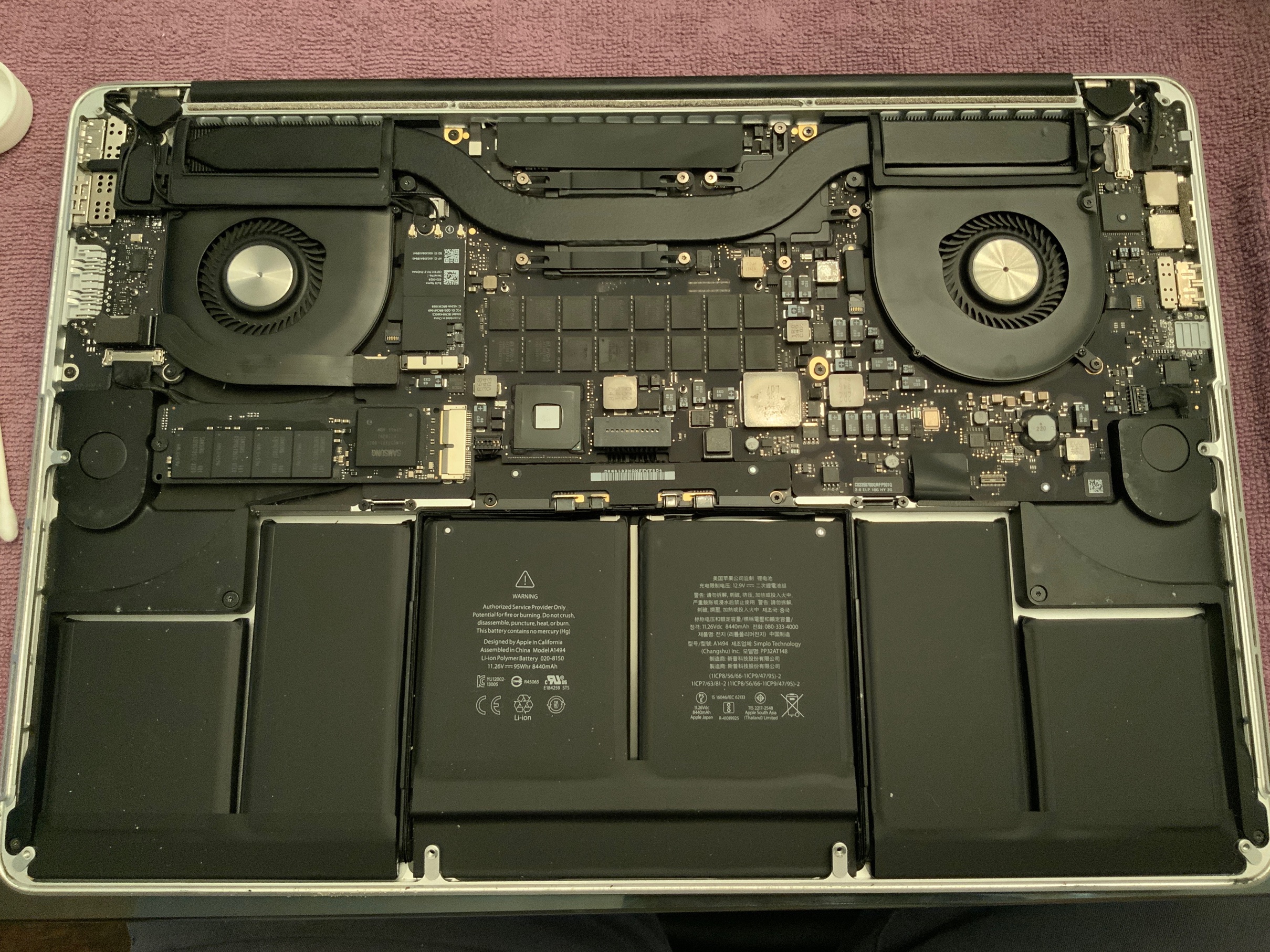 Thanks for all the views, y'all! Let me know how it works out for you.
Reactions: eleafz and ruslan120

Nice pictures and glad it worked out! I just changed the thermal paste on my old 2009 iMac and 2012 MacBook Pro. Same result: the fans are way quieter than before the paste replacement. Both are like whole new machines. IMO this is one of the best things you can do to resuscitate an aging Mac.
Reactions: JPamplin
E

Thanks for this tutorial!
I've seen some people just put a drop on there and saw you shouldn't spread it before putting on the heatsink, but I see here you have pre-spread it. Any idea which is best? Going to do this next on my 2014 i7 with nvidia 750m gpu.

Also on another note: Do you run High Sierra on the macbook pro with nvidia 750m?
I'm still on Sierra but wondering if it is safe to upgrade to High Sierra and still have good nvidia/CUDA gpu driver performance? Adobe says mac os mojave doesn't support cuda for Adobe apps.
Reactions: JPamplin
F

It depends on the thermal paste, good thermal paste has always instructions on the back on how to apply it correctly.

For MX-4 OP actually did it wrong, you are supposed to apply a at best perfectly round drop exactly at the center of the chip surface. The reason behind this is, that the paste gets spread out from the center to the edges when the heatsink is mounted and pressure applied, that way no bubble of air can geht caught in the paste.

if you do it like OP did there will a very high amount of microscopic small air bubbles be caught in the thermal paste, because the paste that's already there off-center will prevent the air from being pressed out. it won't do any harm, but you will miss a few degrees that you could have achieved.

OP did it in every way wrong, but hey, it worked.

Frieg said:
For MX-4 OP actually did it wrong, you are supposed to apply a at best perfectly round drop exactly at the center of the chip surface.
Click to expand...

Frieg said:
OP did it in every way wrong, but hey, it worked.
Click to expand...

I appreciate your comments! No opinion is unwelcome here, but as maflynn pointed out, all methods generally have the same results as long as you use enough.

So why do I prefer the "pre-spread" method? Simple: you can't really trust that people will put a consistent, correct amount of thermal paste in the center every time. At least with pre-spreading, you can SEE that every bit of the die is covered evenly.

So perhaps my approach is to make it easier to replicate - and the results speak for themselves. There's not going to be huge differences in temps anyway with a mobile CPU/GPU, the real advantage is the ability to transfer heat more efficiently to the heatsink - making for FAR quieter fans. It really helps.

eleafz said:
Also on another note: Do you run High Sierra on the macbook pro with nvidia 750m?
I'm still on Sierra but wondering if it is safe to upgrade to High Sierra and still have good nvidia/CUDA gpu driver performance? Adobe says mac os mojave doesn't support cuda for Adobe apps
Click to expand...

I'm on Mojave, and I don't use the professional Adobe apps, so I had not heard of the issues with CUDA, sorry. However, if I were you, I would upgrade to High Sierra for the Apple File System support, plus all the new features including Airplay 2 in 10.13.6.

I went ahead a replaced the thermal paste and cleaned out the dust, wow the fans run much less noticeably. However I am noticing cpu core 1 is running cooler than the other 3 at full load, is that normal?
At idle each core is about the same somewhere between ~43-50C

Under full extensive load, cores 2-4 top out at 100C, while core 1 never seems to max much above 90C. Maybe it is just the internal design of the chip that the furthest away core runs a bit cooler than the ones next to each other? or.. the sensor isn't accurate?

I used the vertical line method, for each die, as that was what is recommended on the arctic silver site, but after reading the arctic silver instructions again online, they say use a 1mm line. My line must have been at least about 1cm not 1mm (but it still ended up being a slightly less than what is shown in the photos on this post)...
With the metal clip thing on the left where the heat sink has to clip under, I wasn't able to go directly down with the heatsink but instead from left to right, could that spread it unevenly?

Or maybe this is typical behavior.
Ambient air temps here are about 85-90F this time of year.

I ran geekbench4 and the single core/multicore results on this mac seemed to be slightly above the average scores on there for this processor.

So a thermal compound expert (who is an owner at Thermal Grizzly) stated that the bubble issue is not an issue (fast forward to 11:32):

Yet another validation of the importance of replacing thermal paste on older Macbooks: