Popular iPhone trivia app HQ Trivia is testing a new social feature in the UK, which allows its users to locate and add their real life friends in the HQ app, reports TechCrunch.

When you add your friends to the HQ app using the new feature, you can keep track of their progress and see who else is playing in any given game. Adding social features is the next major step for HQ Trivia, which now has a player base in the millions. 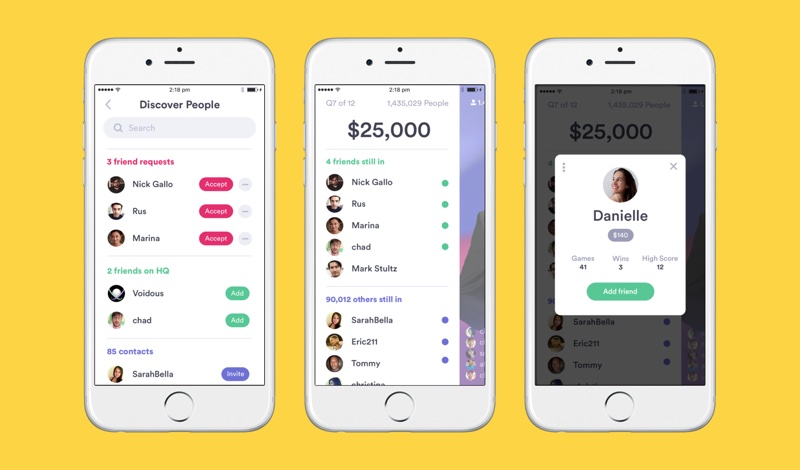 If you're unfamiliar with HQ Trivia, it's an iPhone and iPad app that hosts multiple daily trivia sessions where players can win real money by correcting answering all of the questions. Each game features a set prize pool, and the prize pool is divided among all of the winners.

HQ Trivia launched last year and has seen strong user growth since then. The company recently started offering sponsored prizes provided by corporate sponsors that include Nike and Warner Bros. HQ just this morning announced an upcoming guest host episode that will star Dwayne "The Rock" Johnson and will offer a $300,000 prize pool.

The Friends on HQ feature is rolling out in the UK first, with a United States launch to follow "soon after." HQ also plans to roll out "a variety of new features" that will be "leveraging friends' connections."

HQ Trivia can be downloaded from the App Store for free. [Direct Link]

Have seen you mention this before on your site but assumed the app was limited to residents of the US only.
Comment

Once you add your real life friends in the HQ app, how does that affect your friends' personal information? After the Facebook-Cambridge Analytica incident, it seems wise to ask such questions. I've read the Privacy Policy and it doesn't make this clear.
Reactions: CJM
Comment

I’m kind of glad HQ is ramping things up. A 300k pot of money this Wednesday is very exciting stuff and they seem to actually be bringing about something that has legs for regular people. I don’t really enjoy a lot of the more recent fads in the App Store with clans and team shooters, but I do enjoy tests of knowledge.
Comment

Funny how so many people hate Facebook and yet there’s excitement over this app where again, your personal information and now location is the product. With plans to expand ‘social features’, that just adds value to the data they sell.
Reactions: iGeek2014
Comment
You must log in or register to reply here.
Share:
Facebook Twitter Reddit Email Share Link
Register on MacRumors! This sidebar will go away, and you'll see fewer ads.
Sign Up
Top Bottom