HQ Trivia's Scott Rogowsky: 'There Are Other Games in the Pipeline'

This past Sunday, August 26, marked the one-year anniversary of HQ Trivia's launch on the App Store for iPhone. 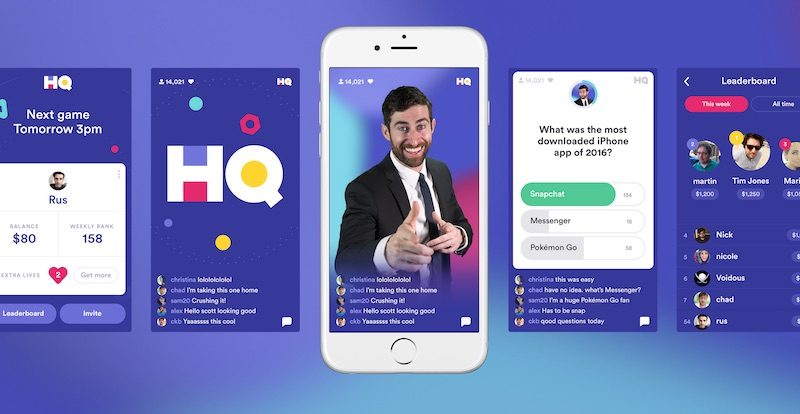 HQ host Scott Rogowsky appeared on Yahoo Finance's "Midday Movers" show on Friday to discuss the future of the game, revealing that parent company Intermedia Labs has plans to expand the live, interactive concept to other games.


​
The plans go beyond HQ Sports, hosted in the main HQ app twice a week, and the separate UK edition of the game:

We already have a sports vertical. HQ Sports goes live Tuesday and Friday nights at 10 o'clock. We have a UK edition. HQ UK. They have a whole team out there in London, working on building it nationally. There are other games in the pipeline. I can't announce them, but I do know that we're close to launching things... this is just the first brick in the wall of potentially a whole network of live mobile gaming that I think is really the full potential here.
Click to expand...

Intermedia Labs will hope to replicate the success of HQ, which surged in popularity in its early months, going from just tens of players to over 2.4 million when Dwayne "The Rock" Johnson guest hosted the show in April.

HQ brought on its first corporate sponsors and advertisers in March. To celebrate Nike's Air Max Day, for example, there was a surprise 15-question game with a shared $100,000 prize. Two days later, there was a special $250,000 prize, sponsored by the Steven Spielberg film "Ready Player One."

Expanding into other games could also offset declining interest in HQ. The game has often seen fewer players as of late versus its peak in early 2018, as the novelty of the app wears off and a multitude of copycats try to mimic the experience.

HQ tasks players with answering a series of 12 questions correctly to win a cash prize. To reduce cheating, players have 10 seconds to choose one of three answers. The show is hosted every day at 9:00 p.m. Eastern Time, and at 3:00 p.m. every weekday, most often by Rogowsky. Other hosts fill in occasionally.

If you haven't played HQ yet, you can download the game from the App Store for iPhone, iPad, and Apple TV. The app is also available on Android.

Article Link: HQ Trivia's Scott Rogowsky: 'There Are Other Games in the Pipeline'

Interesting. What other games can work with millions of players where it narrows down like this?

Some kind of Hangman / Wheel of Fortune, where you only have 10 seconds to fill in the answer to the puzzle?

Have people vote on which letter of the alphabet you want revealed, every ten seconds it gets revealed, first to guess moves onto the next round? How do you keep people from using a bot to cheat at that though?
Comment

"Please keep us in the news. We're not a one hit wonder, we swear."
Reactions: tennisproha, ritmomundo, Blackstick and 4 others
Comment

Such a formula. Questions 1-3 so easy you always get them. Question 4 a little more difficult. Question 5 something that knocks out 60% of players. Show always reacts like OMGz we can’t believe so many got it wrong. The back to something not so hard. Every single game goes this way...
Reactions: tennisproha and pipis2010
Comment

Ultramove69 said:
Such a formula. Questions 1-3 so easy you always get them. Question 4 a little more difficult. Question 5 something that knocks out 60% of players
Click to expand...

You're describing pretty much every trivia game show, this isn't unique to HQ.
Comment

That sounds like that game where you wait for new Apple products in the pipeline, but you get 10 years for an answer instead of 10 seconds...
Reactions: pipis2010
Comment

Wait, this is still a thing? I'm surprised.
Comment

I stopped playing weeks ago. Won $2 just the once, highlight of my night.
Comment
T

Meh, Scott is annoying af. The games drag on unnecessarily with their goal obviously being attracting most players per game. Basically great for people who are good at playing trivia strategy.
Comment
U

They lost a huge amount of players. In the beginning there were an average of 800k users. Now the average is around 200k. Whatvthry forgot to mention is that until a couple of weeks ago there was also a Germany edition which attracted only roughly 2k players. It was quietly discontinued.
Reactions: SegPip
Comment
You must log in or register to reply here.
Share:
Facebook Twitter Reddit Email Share Link
Register on MacRumors! This sidebar will go away, and you'll see fewer ads.
Sign Up
Top Bottom