Hulu today announced the launch of a Live TV Guide that's designed to allow subscribers to its live television service to access a dynamic list of the television programs that are currently available to watch.

Hulu first introduced a Live TV guide option on the web as a test project last fall, and promised an interface redesign with the Live TV guide back at CES in January. As of this morning, Hulu's new guide and dedicated live destination is rolling out to the fourth and fifth-generation Apple TV, the Xbox One, the Amazon Fire TV, and the Nintendo Switch. 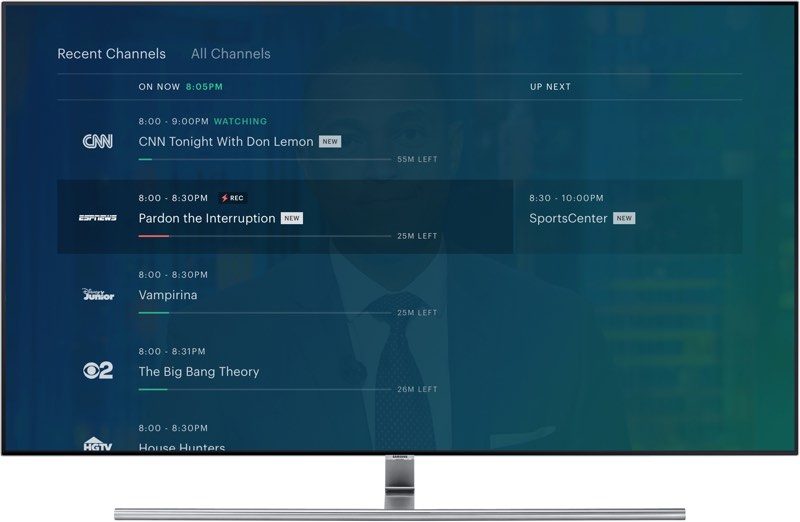 On these devices, live TV subscribers will be able to instantly access live TV using the new lightning bolt icon that's located to the right of the home icon. Selecting this icon will bring users to live playback on their most recently watched channel.

While watching live programming, Hulu subscribers can access an enhanced guide with details on what's currently on and what's coming up next. Users can customize the look of the guide by choosing to sort via "All Channels" or "Recent Channels," which lists the last 10 watched channels.

Using the guide, subscribers are also able to record any live or upcoming programming or start a program from the beginning if it's available for DVR recording. Hulu has designed the guide to let subscribers navigate between watching now, browsing, or recording a show for later all with a few clicks.

Hulu says the live TV destination and guide will roll out to additional devices in the near future.

Finally! It's 1995 in Hulu-land. This was the one major feature missing that made me cringe (but not cancel Hulu.) It's always been impossible to see what's on in an hour without clicking on every damn channel. Can't wait to get home and try this. Seriously.
Reactions: EmilGH and Blakjack

Now if Youtube TV would let me look ahead for a day or two, or even the weekend, so I can plan what I want to watch/ DVR. Live TV programming almost always starts on the hour or at half hour, so its annoying to completely miss something or start watching something too late.

Between on-demand streaming and breakfast all day, the world has truly lost its way.

I do miss Comedy Central though
N

Are any of these "live TV" services reasonable replacements for cable? I was an HTPC guy back in the day (tuning OTA HD via a Ceton card). Then I went TiVo. Then DirecTV Now...Sling...PS Vue...Hulu. And back to TiVo after finding all "live TV" solutions to be lacking (in either usability or channels or both). Living in a relatively small town now (Santa Barbara), it seems the promise of live TV via Hulu (or any of the others) falls short due to A.) the absence of local channels and B.) the absence of any other "local" channels (e.g. out of Los Angeles or San Francisco). Has this been resolved? Am I behind the times or simply missing a solution?

Note: I am married to someone who requires local news broadcasts and primetime television on a daily basis. Oh, how I'd love to break free from the shackles of local news and primetime television viewing!
You must log in or register to reply here.
Share:
Facebook Twitter Reddit Email Share Link
Register on MacRumors! This sidebar will go away, and you'll see fewer ads.
Sign Up
Top Bottom