While the stainless steel Link Bracelet is one of the nicest looking Apple Watch bands available, it is also the most expensive with a $449 price tag for the 38mm or 42mm version. For comparison, you could purchase an entire Apple Watch Sport for $100 less than the Link Bracelet.

But for those looking to give their Apple Watch more of a premium Rolex-like appearance without breaking the bank, look no further than the HyperLink Stainless Steel Link Bracelet from HYPER by Sanho Corporation, which launched today on crowdfunding website Kickstarter with a $50,000 funding goal.

HyperLink is crafted from the same 316L stainless steel alloy used for the Apple Watch, providing the band with added strength and corrosion resistance. The metal is also water and sweat resistant, allowing you to carry out everyday tasks such as showering, washing your hands or jogging without worrying -- although you're probably still better off wearing a Sport Band for the latter. 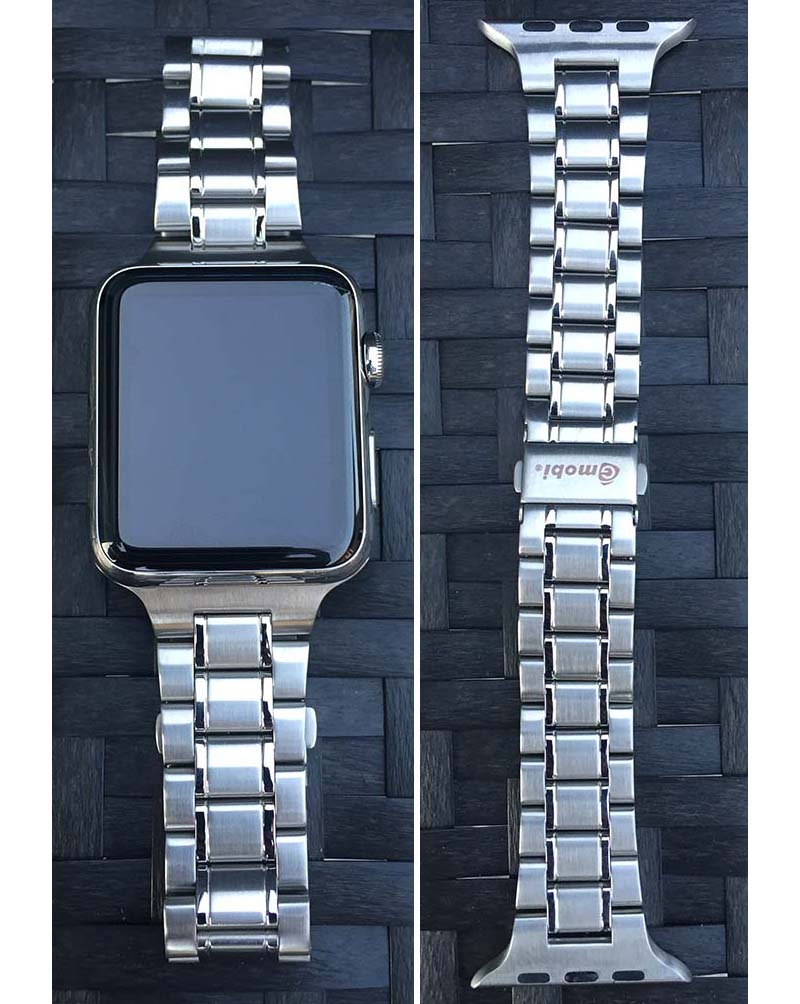 The Swiss-inspired band has a unisex link bracelet design available in three models: 42mm Space Black, 38mm Silver and 42mm Silver. 38mm in Space Black is also listed as a possible stretch goal on Kickstarter, although no specific funding level is listed. The 42mm Silver model that I tested closely matched the look and feel of my stainless steel Apple Watch -- well beyond my expectations for a non-Apple band.

The silver HyperLink that I tested has a lustrous appearance on the outside, while the inside is flatter in comparison. Meanwhile, the Space Black model has an additional diamond-like carbon (DLC) layer added for a sleek, durable and scratch resistant finish. The band, slightly thinner than a Sport Band, did not attract any noticeable scratches or scuffs after wearing it over the course of one week.

When I first tried on the HyperLink, I immediately noticed that it was well oversized for my wrist. But like most stainless steel bands, it is possible to remove individual links by inserting a very thin-pointed screwdriver or tool into the pinholes on the side to pop out the pressure-sensitive pins holding the bracelet together. Disappointingly, no such tool was included alongside the band.

Fortunately, I found an adjustable screwdriver laying around the house that was thin enough to pop out the pins holding together individual links. The process was rather simple and should be familiar to anyone that has ever owned a common stainless steel wristwatch before, but the lack of a tool included in the box is definitely something to consider when choosing between stainless steel bands.

HyperLink is precision CNC milled to fit the Apple Watch, and the results are favorable. Unlike some third-party bands, the adapters on HyperLink slide into the Apple Watch as effortlessly as official bands sold by Apple. The band also has a convenient quick clasp mechanism that enables you to quickly put on or take off your Apple Watch -- much faster than the Classic Buckle or Sport Band in my testing.

For the first few days, I wore the HyperLink rather tight against my wrist and noticed some pinching of my skin when closing the quick clasp mechanism, but otherwise the band was comfortable, lightweight and did not catch my hair. I have since added one link back to the band for a more loose and relaxed fit that gives the Apple Watch some flexibility on my wrist and makes it easier to take on and off.

HyperLink is a premium yet affordable Apple Watch band that receives my recommendation, especially at its $49 early bird price; even at its $69 or $99 price points, it is a worthwhile option -- with only a few drawbacks -- to consider among third-party Apple Watch bands. 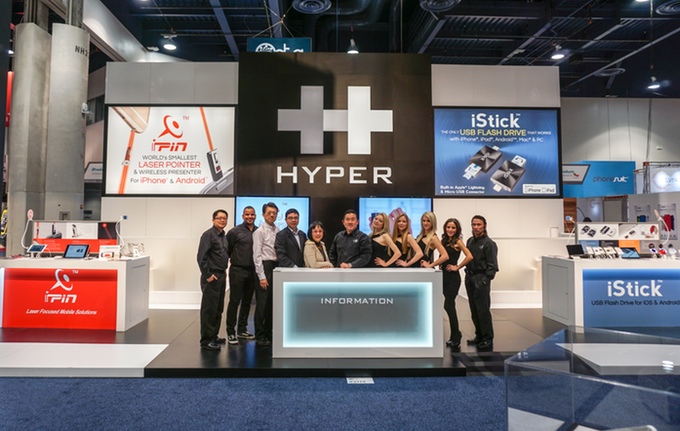 HYPER by Sanho Corporation also has a reputable track record of successful crowdfunding campaigns on Kickstarter and Indiegogo, including CloudFTP, iStick, Pearl (Kickstarter), Pearl (Indiegogo), iPin for iPhone/Android, iPin for iPhone and HyperDrive for MacBook. The campaigns have altogether raised over $1.6 million.

HyperLink is $49 on Kickstarter in any size or color for the first 1000 early bird pledgers, at which point the price rises to $69. The regular retail price will be $99 following the crowdfunding campaign.

HYPER is also offering bulk deals on the HyperLink through Kickstarter, including two bands for $98, three bands for $147, five bands for $245, ten bands for $490 and larger reseller packages.

HyperLink's crowdfunding campaign runs from August 25 to September 30, with early bird and regular rewards expected to ship in October and November respectively. The band will be shipped to retailers in December and sold for $99.

I don't own an Apple watch, and probably won't until at least later generations. However this band peaks my interest. I never cared for the Sport Band but the apple alternatives cost way too much to consider. A nice looking metal band like this for under $100 is a beautiful alternative.
Reactions: Jamalien, XTheLancerX, 69Mustang and 3 others

AcesHigh87 said:
I don't own an Apple watch, and probably won't until at least later generations. However this band peaks my interest. I never cared for the Sport Band but the apple alternatives cost way too much to consider. A nice looking metal band like this for under $100 is a beautiful alternative.
Click to expand...

There are plenty of alternatives. This is just the latest. I have two leather loop bands that are basically an exact replica knockoff of Apple's that cost $35 a piece, as opposed to the $150 apple charges.
Reactions: Oblivious.Robot, 69Mustang and 341328

iBlazed said:
There are plenty of alternatives. This is just the latest. I have two leather loop bands that are basically an exact replica knockoff of Apple's that cost $35 a piece, as opposed to the $150 apple charges.
Click to expand...

I don't deny that there are alternatives, I just haven't looked (again, I don't own the watch) so I simply wanted to give my opinion on the one being put forth.
Reactions: scarecrowmac and JackANSI

The logo on the band is kind of hideous... also, why does it say "Gmobi" instead of "HyperLink" or "Hyper", you know, the name of the company or product?

Better would be just moving the logo to someplace where it would never be seen while it's worn.
Reactions: Nermal, MaximizedAction, nutmac and 8 others

Yes, and $5 t-shirts can be bought too, but they're made in a sweatshop.
Reactions: haruhiko

May I just say, ew ew ew ew eeeew. I am lucky to own a (black) stainless steel link bracelet and I find this gross.
Reactions: garyofnj, mw360, macs4nw and 4 others

The band looks ok, but that logo automatically kills it. Plenty of alternatives that don't have a huge logo on the clasp.
Reactions: nutmac, Nevaborn, scarecrowmac and 8 others

Mac Fly (film) said:
Yes, and $5 t-shirts can be bought too, but they're made in a sweatshop.
Click to expand...

1. You don't know the conditions that third party bands are manufactured in. Every company is different. Besides, do you think the Apple link band costs $450 because they pass that money on to the people slaving away making them? LOL!!

2. Have you not heard about reports of poor working conditions in factories that make Apple products?

Get your head out of the sand.
Reactions: ohio.emt, 69Mustang and JackANSI

That fussy aesthetic is totally at odds with that of the Watch itself.
Reactions: CarlJ, Mactendo, JackANSI and 2 others

Too bad it's so ugly.
Reactions: haruhiko
M

This band looks very similar to bands already available on Amazon. And they want $50,000 just to make them available? It sure looks like they're just sourcing the band from some other manufacturer rather than actually making their own product.
Reactions: CarlJ, mw360, Mactendo and 3 others

Ugh, this has been available since launch:

Menopause said:
May I just say, ew ew ew ew eeeew. I am lucky to own a (black) stainless steel link bracelet and I find this gross.
Click to expand...

WTF were they thinking of putting that ugly GMobi logo that has no connection to anything? Who is GMobi?

The fact they put that on tells me they don't pay attention to the design and the details. On their kickstarter page, they ignored it like it is nothing and said they might put Kickstarter logo on instead. They loses all creditability for me.
Reactions: nutmac, Gooner49 and myscrnnm
5

Never mind the bands, where the heck are the refurbs for 199-249?
Reactions: Galley

Mac Fly (film) said:
Yes, and $5 t-shirts can be bought too, but they're made in a sweatshop.
Click to expand...

so are high fashion brands and limited edition sneakers

I own the apple link bracelet, I gotta say this doesnt look nearly as good But for the price, I guess its ok. But they made one major bummer with that logo. WHy the heck? Apple dont even show the apple logo more than nescessary, which is a logo you can wear with pride. These bracelet makers clearly dont understand apple customers.
J

Amazon, eBay, etc. There are plenty of options for apple like watch bands for less than the above. I bought a Space Black Link band for less than $30 and it looks great still after a couple of months of heavy duty wear.
Reactions: ohio.emt
2

I know the Apple Links Band is expensive, but i love the way it looks on my wrist. And it looks better than what I see in these pictures. Sometime the adage of you get what you pay for is true. Although I paid more, I also got what I believe to be a better band. Clearly there will be people that are comfortable with the offering here and the price is certainly better. But if you can take out that second mortgage, you will not regret the Apple band.
V