I found this online...

I found this interesting article online and was wondering if anyone here has experienced this aftermarket processor before.

I've never used one, but now I want to experience a G3 at that speed just to see what it's like.
X

Personally I would've chosen a 750GX as a laptop processor anytime over the 1.33ghz 7447A in my iBook. Yeah, 750s have smaller potential since they lack SIMD. But Apple did stick to their "G3 G4 G5" concept until they dropped a nuke on the whole thing. G3 boards almost never improved(else than cpu freq) when the current thing was "G4". Though Apple has always been like this.

There also was a 1.1ghz 750GX ZIF upgrade made by PL like the article says. The funny thing is the fact you could upgrade your Yikes! to a 1.1ghz G3 this way.

A G4 is basically just a G3 with AltiVec and handles math functions a little better. A 1GHz G4 will perform just as fast as a 1GHz G3 in most cases (when not using the AltiVec instructions).
X

ifrit05 said:
A G4 is basically just a G3 with AltiVec and handles math functions a little better. A 1GHz G4 will perform just as fast as a 1GHz G3 in most cases (when not using the AltiVec instructions).
Click to expand...

I agree, though the G3 always kept the "pure powerpc" 4-stage pipeline that originated from the 601 vs the 7450's 7-stage pipeline and increased hardware which just made the 7447 significantly bigger than the 750GX even though the latter had twice the on-chip cache size. The 750 should've stayed in portables IMO..

I also agree.
Btw awesome avatar. One of the best characters in FFVI.

I have the desktop version of that processor installed in a B&W.

It absolutely flies when doing anything that doesn't require Altivec, and does so without breaking a sweat with a stock B&W heatsink...
Reactions: LightBulbFun and AphoticD

ifrit05 said:
A G4 is basically just a G3 with AltiVec and handles math functions a little better. A 1GHz G4 will perform just as fast as a 1GHz G3 in most cases (when not using the AltiVec instructions).
Click to expand...

G3s are more closely related to the 603, whereas G4s were built off 604e's. I have read that for certain situations, a 604e will outperform a G3. This thread talks about it a bit.

I had a single 500mhz G4 in sawtooth (now upgraded to a dual 450mhz). I have a 500mhz G3 pismo, a 500mhz white iBook G3. I also used to have 2 500mhz iMac G3s. The sawtooth with the 500mhz G4 runs circles around all of those. (granted I did not run any benchmarks, but maybe I will for a fun project; I have another sawtooth that I slapped the single 500 in) In my opinion the G4 feels faster in everything it does. At least while using OS X.
Last edited: Nov 7, 2018
Reactions: AphoticD

on the subject of the 1Ghz Pismos, there are pictures of said upgrade online and its interesting as its literally a stock Pismo CPU card with the G3 PPC750L removed and a small interposer PCB soldered on with a G3 750FX/GX stuck on top of that

they even left the backside L2 cache on although of course that now does not do anything.

it would be fun to reverse engineer the small interposer board, and then make something like a 1Ghz iMac/iBook G3 or such

iv also heard there was a Prototype 900Mhz 7447A G4 Pismo upgrade card I would love to see pictures of that and see how it was put together.

I actually have a small gaggle of PPC750GX/GL chips and I hope to solder one onto a 750FX iBook G3 at some point and see if it works (the 750FX and 750GX are pin compatible, the 750FL and 750GL are just low power variants) 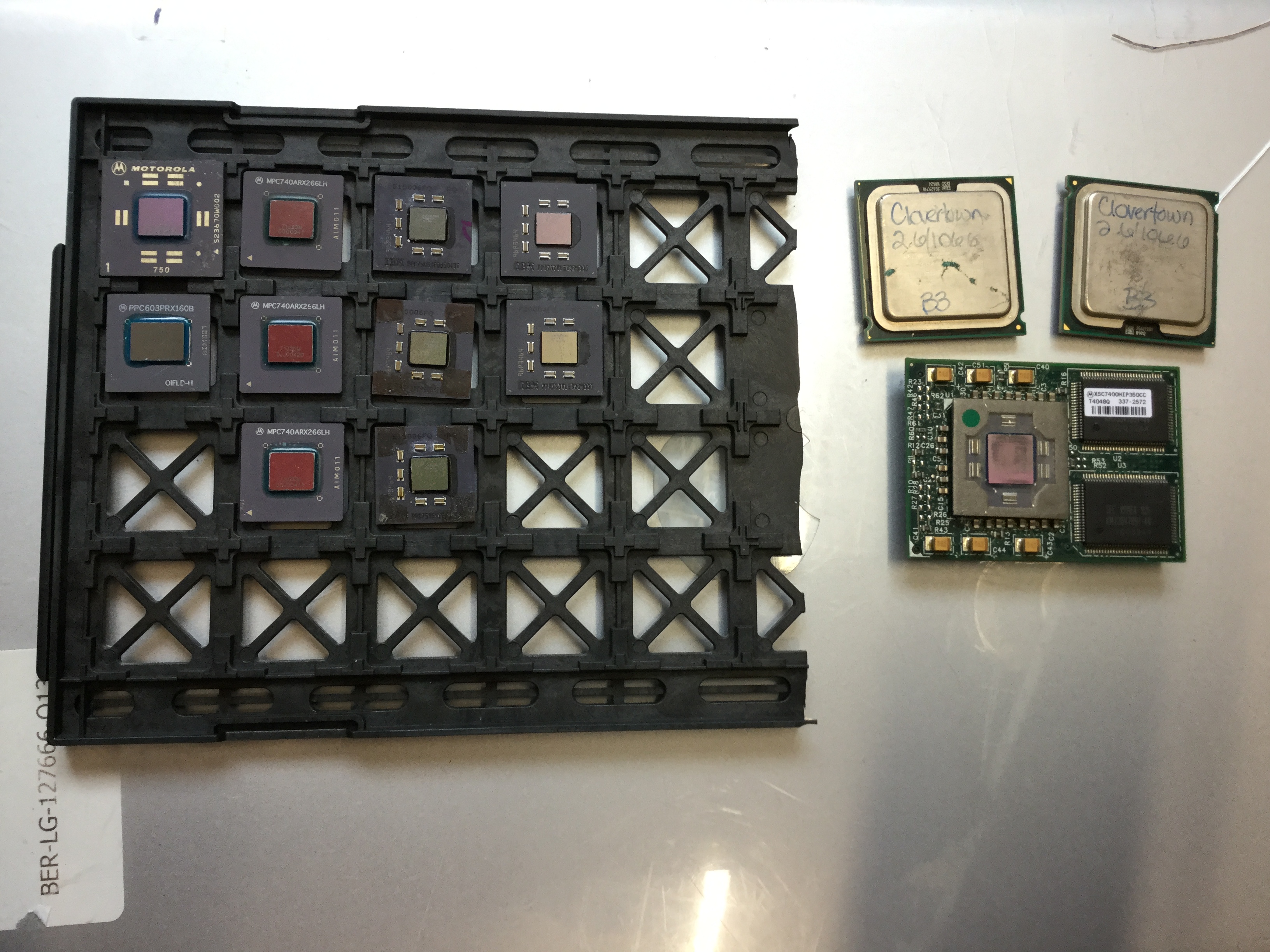