IBM on Tuesday continued the expansion of its MobileFirst for iOS enterprise portfolio with eight new workplace apps ranging in specialty from healthcare, insurance coverage, and retail sales (via AppleInsider).

The majority of this week's expansion lies in the healthcare field, with four of the eight new apps focusing on apps aimed at assisting healthcare professionals with more easily manageable patient and hospital data. They range from basic patient data file management to curating a list of current and completed tasks required of nurses working any given area of a hospital, and even an app that allows doctors and nurses to continue evaluating and administering diagnoses while a patient is at home. 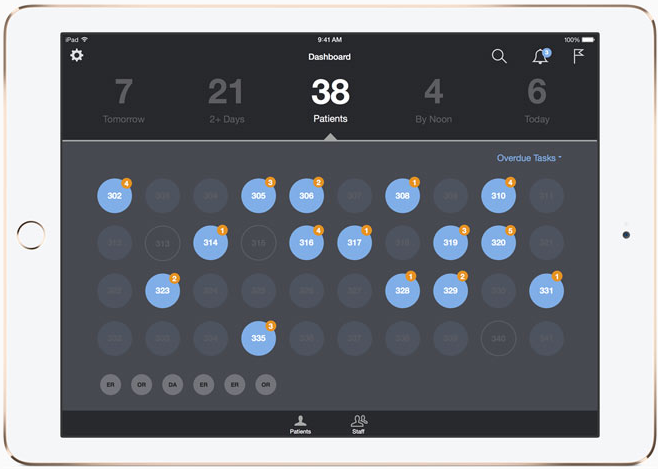 The Hospital Lead app offers head nurses a dashboard of employee delegating tools.​
​
The remaining four apps cover new areas for the IBM and Apple partnership, like the industrial products field, and old ones, seeing its retail and insurance lineup bolstered with new solutions.

Travel and transportation gets a new app, as well, called Ancillary Sale, which allows flight attendants to sell seat upgrades, food, beverages, and merchandise to passengers with the ease of Apple Pay. The app also remembers individual passenger preference, so flight attendants can recommend items on current flights based off of the purchases a user made on previous flights.

Apple and IBM first announced the workplace-focused partnership back in July, with the first round of ten apps hitting last December. Since then, the companies expanded slightly in early March with three new enterprise apps for the travel and transportation, retail, and financial fields. Every app in the collection is built exclusively for iPhone and iPad, with highly secure software that can be deployed, managed, and customized to fit every business hassle-free.

Visit the official websites of both Apple and IBM for more detailed looks at all of the old, and new, MobileFirst for iOS apps released over the past few months.

With all the April fools news, I'm not sure what to believe now.
2

I understand that in the corporate world we need a longer lead time for sales and implementation. Having said that I have not heard of anyone actually buying and implementing any of the solutions coming out of this partnership.
R

Cuban Missles said:
I understand that in the corporate world we need a longer lead time for sales and implementation. Having said that I have not heard of anyone actually buying and implementing any of the solutions coming out of this partnership.
Click to expand...

You likely wouldn't hear about it unless you work in a Fortune 1000 company, as that is IBM and Apple's main target for these products right now. They also will likely be white label products, unless the clients are specifically looking for publicity.
You must log in or register to reply here.
Share:
Facebook Twitter Reddit Email Share Link
Register on MacRumors! This sidebar will go away, and you'll see fewer ads.
Sign Up
Top Bottom