If there is an October update, when can we start expecting more specific details?

It seems that as an Apple product launch approaches, rumors and leaks become increasingly specific.

With less than two weeks until October I've yet to see anything about the Mac mini, beyond a few analysts saying "an update will happen" and that will have a pro focus.

If there is an October update, when should we expect more details to start coming in through the rumor mill?
S

Mac information is harder to come by than iOS devices, there's relatively few parts leaks from the Mac supply chain. At this stage if there's to be an update it may also be in the existing case design so therefore nothing to see there either.
I

A pro version wont be 599. More like 1000+. And it might not even happen this year.
Reactions: arkitect and opeter

I have a feeling, that there wont be any update to Mac mini this October.
Reactions: arkitect
M

About a day or two before it drops.

More likely a day or two after it drops.
M

People need to understand, why supply-chain leaks happen. They happen because somebody paid a worker a good amount of cash so that (s)he smuggled out some part. In the case of the iPhone, there's significant demand for these parts from the sides of "analysts" or case-makers or website-owners who want to drive traffic to their website, getting people to sign-up for newsletter and in the end increase all kinds of revenue from affiliate-links to ad-clickthroughs.

Given the recent "double-down" on security and the way it's reportedly implemented, I'd guess it is now very difficult to actually do that. Or only with a large amount of cash to bribe your way through the multiple security levels at the manufacturing plants.


In the case of the MacMini, nobody wants to bribe anybody because unlike the 200m iPhones Apple moves every year, the MacMini is literally a rounding-error on the income-report of Apple. So it has no impact on the stock-price at all.
There are also no cases or other 3rd-party gear sold for it in significant quantities. So, nobody give's a hoot.

If Apple actually updates the Mini (which I would love them to do), it will be a big testament to their commitment to their users. It certainly does not make much sense financially.
Reactions: Enclavean, Cape Dave, LeeW and 2 others

MRrainer said:
In the case of the MacMini, nobody wants to bribe anybody because unlike the 200m iPhones Apple moves every year, the MacMini is literally a rounding-error on the income-report of Apple. So it has no impact on the stock-price at all.
Click to expand...

This exactly, such an inconsequential line in the grand scheme of things. That said there have been rumours from a number of different sources suggesting there will be some form of update in October. And that is more rumour than I have heard in several years combined so that is promising at least.

What will arrive in October? Not sure, at worst I would suggest the same form factor, upgraded CPU and maybe some port changes. At best the rumoured Mini Pro in whatever form it will arrive in.

If it's the former then it may just be silently updated after the event, for the latter it will get a short mention at best.

Again it's not a significant device in the overall range (unless they announce the mini pro and it's a game changer), if the new cheaper Air, new iPad and possible upgrade to the iMac are being announced then they will focus on them at the event, they make the money, not the Mini.

I hope I am wrong, but I do not see an update coming.
We have all spent years wading though promising rumors and discussions that ultimately end by years end with “no update”.

Time to move on folks.
Reactions: arkitect and opeter

DonCarlos said:
We have all spent years wading though promising rumors and discussions
Click to expand...

The Ming-Chi Kuo rumor is the first "promising" one I've seen in years (I don't count Tim Cook saying "we love the Mini" as a "promising rumor"). https://www.macrumors.com/2018/07/11/apple-product-updates-fall-kuo/

Who knows? Would not be terribly surprised if there weren't a new mini. But clearly now is not the "time to move on". Anyone who has waited this long can surely last a few more months.
Reactions: ActionableMango
I

Sure. But my point was that we won't have to wait long to find out if the rumor is true. So this seems like the wrong time to "move on". When was the last time we saw something like this on the MacRumors front page? 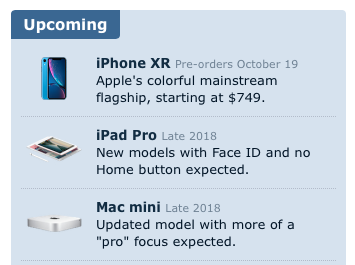 Boyd01 said:
Sure. But my point was that we won't have to wait long to find out if the rumor is true. So this seems like the wrong time to "move on". When was the last time we saw something like this on the MacRumors front page?

As you said: it's basically the Ming-Chi Kuo rumor turned into a fact.

The Apple News circle is such an incredible echo-chamber (or circle-jerk, if you want): one website reports something, sometimes literally pulling it out of a bloggers ass and then other websites start to quote the first one and then it counts as "news", like it's a fact.

I read that macOS Mojave has removed support for font anti-aliasing, because it's pointless on the high-resolution screens they ship now. As I'm still on a Mini, this is one less incentive to upgrade to macOS Mojave, for me.
OTOH, it would make sense to update the low-end hardware that cannot deal with 4k displays as of now.
Reactions: opeter, Cape Dave, arkitect and 1 other person
S

This meant that the results for the new Macs would appear in the following quarter's results including the crucial holiday season.

I think this year's results could be announced as late as Tuesday October 30, and if they plan to introduce Macs exclusively into the holiday quarter they could be released on Thursday November 1 making it a very late update indeed.

Apple have released Macs prior to the results call though - notably in 2013 when they made the results call on Monday October 28, 6 days after the launch date of Tuesday 22, 2013 for the MacBook Pros.

On that basis we could be looking at a release date as soon as Tuesday, October 16 if the results call remains fixed on October 30.

If there is to be an event rather than a sudden press release, we may start seeing invites as soon as October 9 to give tech journalists time to book their travel arrangements.

I'd say that any new configuration replacement for the MacBook Air will need a full event to maximise the push for the probable buyers of the replacement model. Although Phil might have to mention the keyboard


MRrainer said:
I read that macOS Mojave has removed support for font anti-aliasing, because it's pointless on the high-resolution screens they ship now. As I'm still on a Mini, this is one less incentive to upgrade to macOS Mojave, for me.
OTOH, it would make sense to update the low-end hardware that cannot deal with 4k displays as of now.
Click to expand...

It makes logical sense to bury the whole 2014 Mini range rather than let one model continue afterwards as an entry level machine. The inability to drive a 4k display will become telling over the next few years.

After all, if you don't end the entire range the model technically doesn't go obsolete in 5 years.
Reactions: Cape Dave
K

I'm hoping for a new Mini to take the place of what has been a mackintosh the last couple years. I got tired of messing with things, the last being unable to use USB3 with an update in High Sierra.

This is a computer that I use to consolidate photos/music, backup iDevices, etc. My MacBook Pro has too small of internal storage to use for this, and my old Mac Pro went out of support a couple years ago.

And a new Mini would be much cheaper than an iMac or a new MBP (where my current MBP would have taken the place of the desktop with external HDs).

If Apple doesn't hold an event in October the new Mini, the new Air, etc., most likely will not happen. If an event is scheduled, there might be some leaked information very close to the date of the event.
You must log in or register to reply here.
Share:
Facebook Twitter Reddit Email Share Link
Register on MacRumors! This sidebar will go away, and you'll see fewer ads.
Sign Up
Top Bottom