Long story short, my original imac screen got cracked, got a local computer guy to fit a new one for me... turns out he did a terrible job as it fell off a couple days ago and cracked...

Anyway... that's not really what this thread is about.

When it fell off i assumed it was just the screen that had got damaged. However i just reconnected the screen to the mac and im not getting any image from it. At first i assumed the screen was just dead, however upon further inspection i noticed that there was some minor damage where one off the screen cables connects to the logic board or whatever it's called.

I have attached images of this, visually to me it just looks like a bit of metal got bent that helps keep the cable secure, the cable fits in fine although isn't as secure as it should be due to the small bent connector that presumably got damaged when the screen fell off (pulling the cable with it).

I have ordered a new screen to test that but if that doesn't work i can only assume the actual computer has got damaged as well. Which leads me to my next question...

Is this the kind of damage that Apple will tell me will cost hundreds of £ to fix ? Is it basically a case of having to swap out the entire logic board ?

Here are the pictures 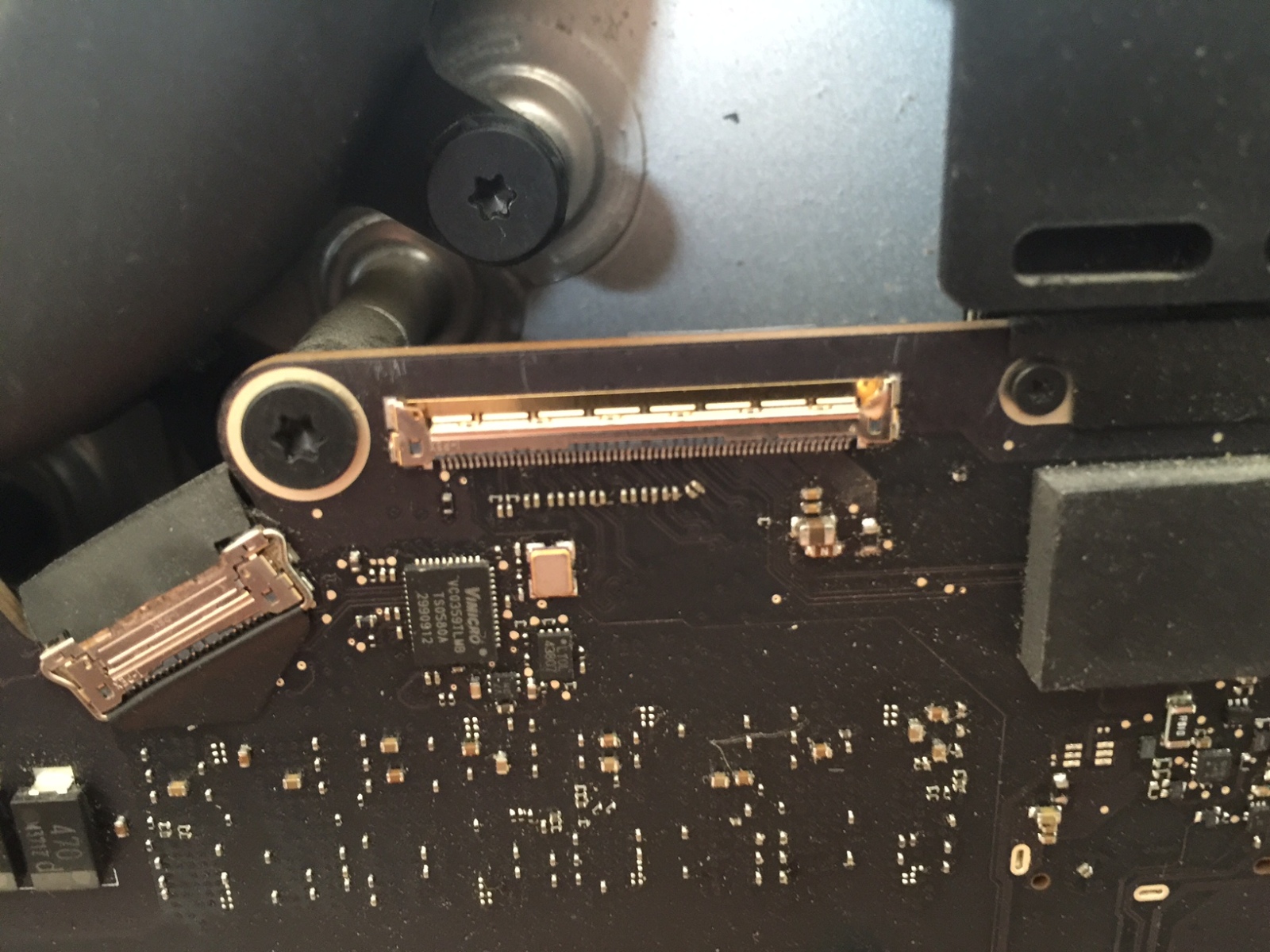 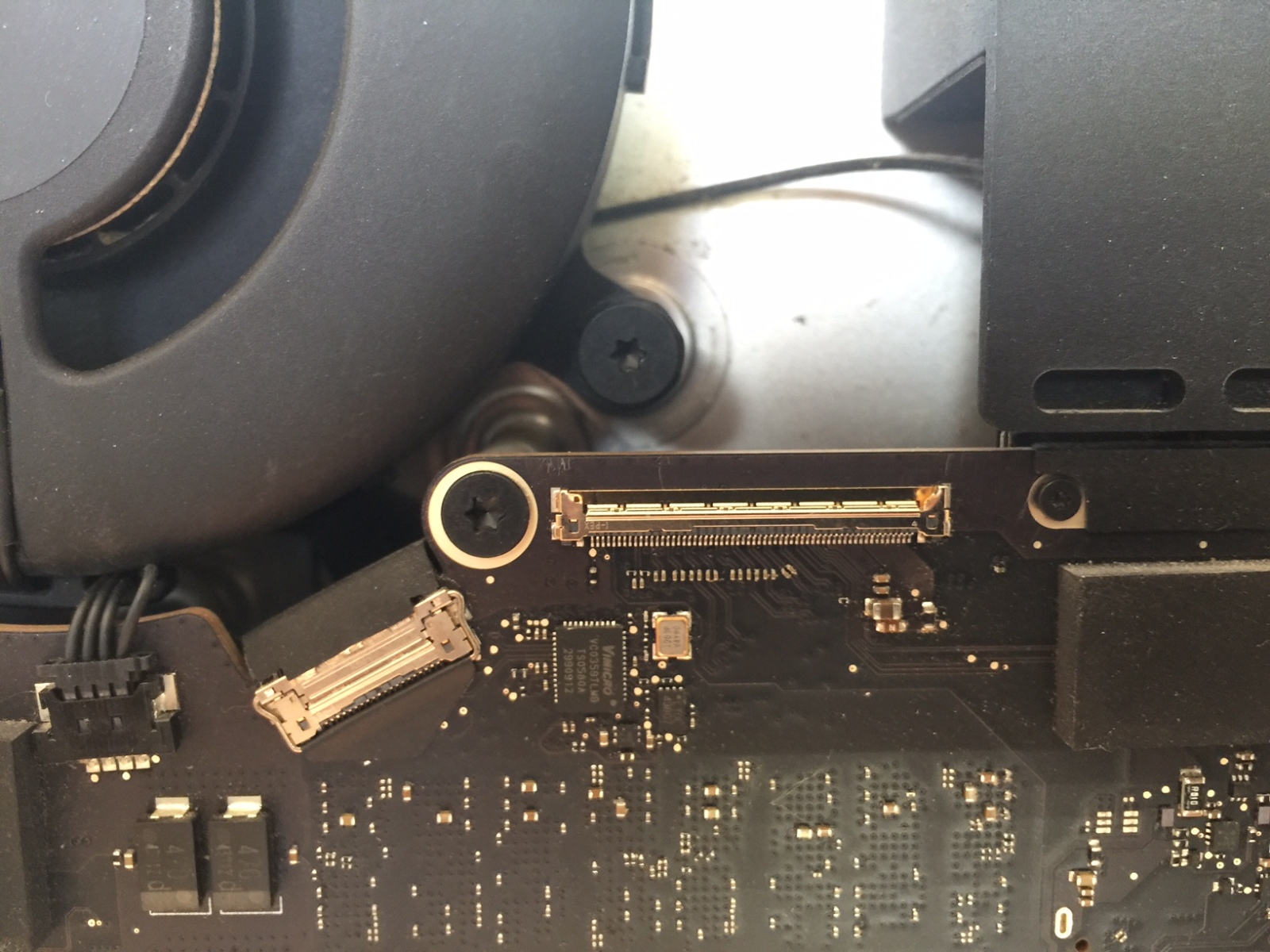 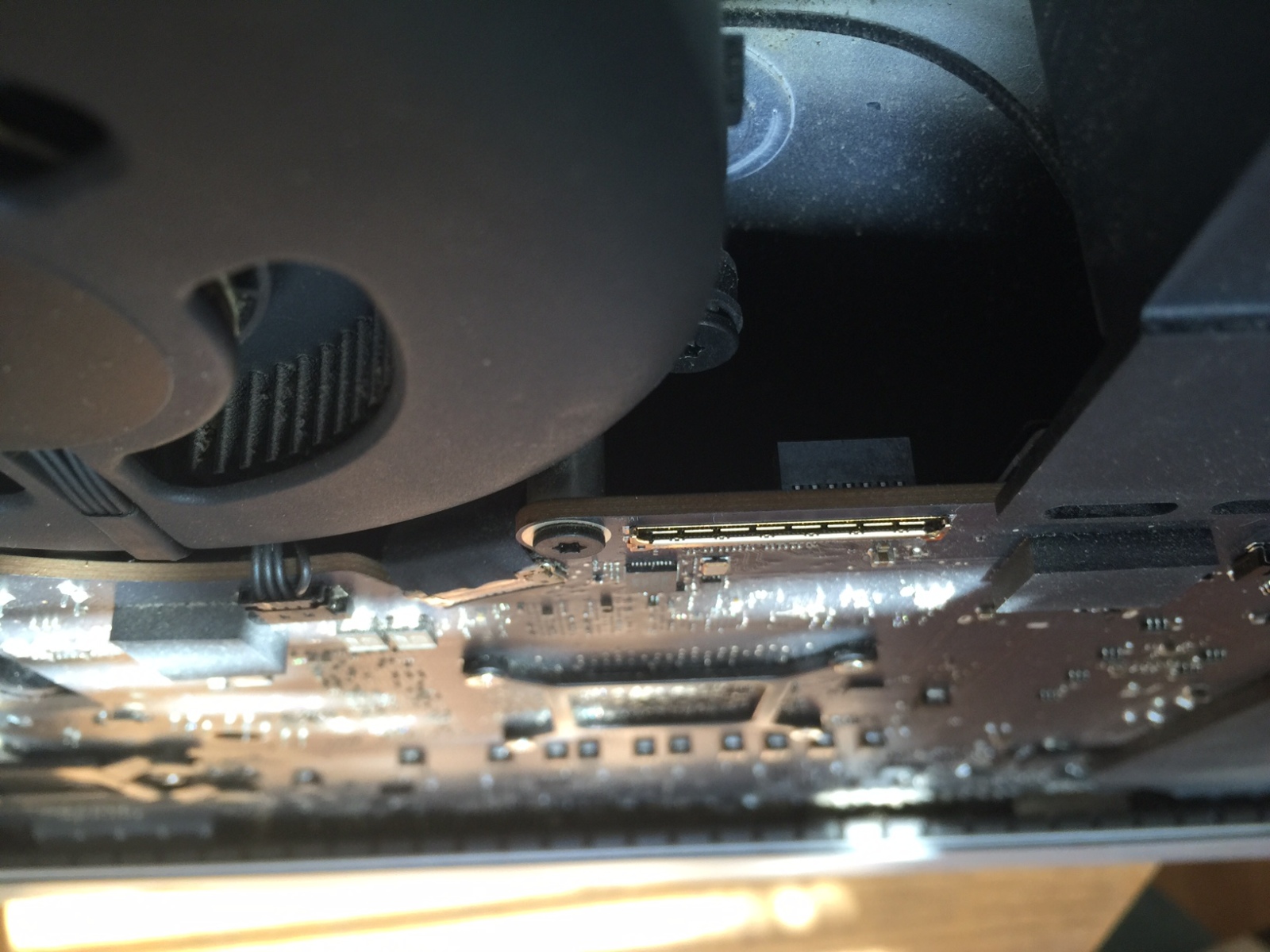 How, just how can 'the screen fall off'? Is this the current gen iMac, the thicker version or older? I know this is not what this thread was about, but I got really curious.

Actually, knowing how old your iMac is might help with answering the question what Apple can do about this. Swapping the whole board might be an option as I am not sure they have that bracket in stock and are willing to replace just that part.

Have you tried going back to your local computer guy, asking him what to do and if he can fix it or else, tell him to get another job?
M

It's an iMac 5k from early 2015, it fell off because he did a rubbish job of applying the adhesive strips which keep it in place.

I can no longer get in contact with him unfortunately, he did the replacement about 2 months ago.
Z

My only question, is the socket actually damaged? Can't tell by the photo but usually they socket has a hinged door so to speak did you push it shut after sticking the cable in?

After further inspection of the photos I can see the bent metal I'm surprised it doesn't or didn't have the socket door to secure the cable.
M 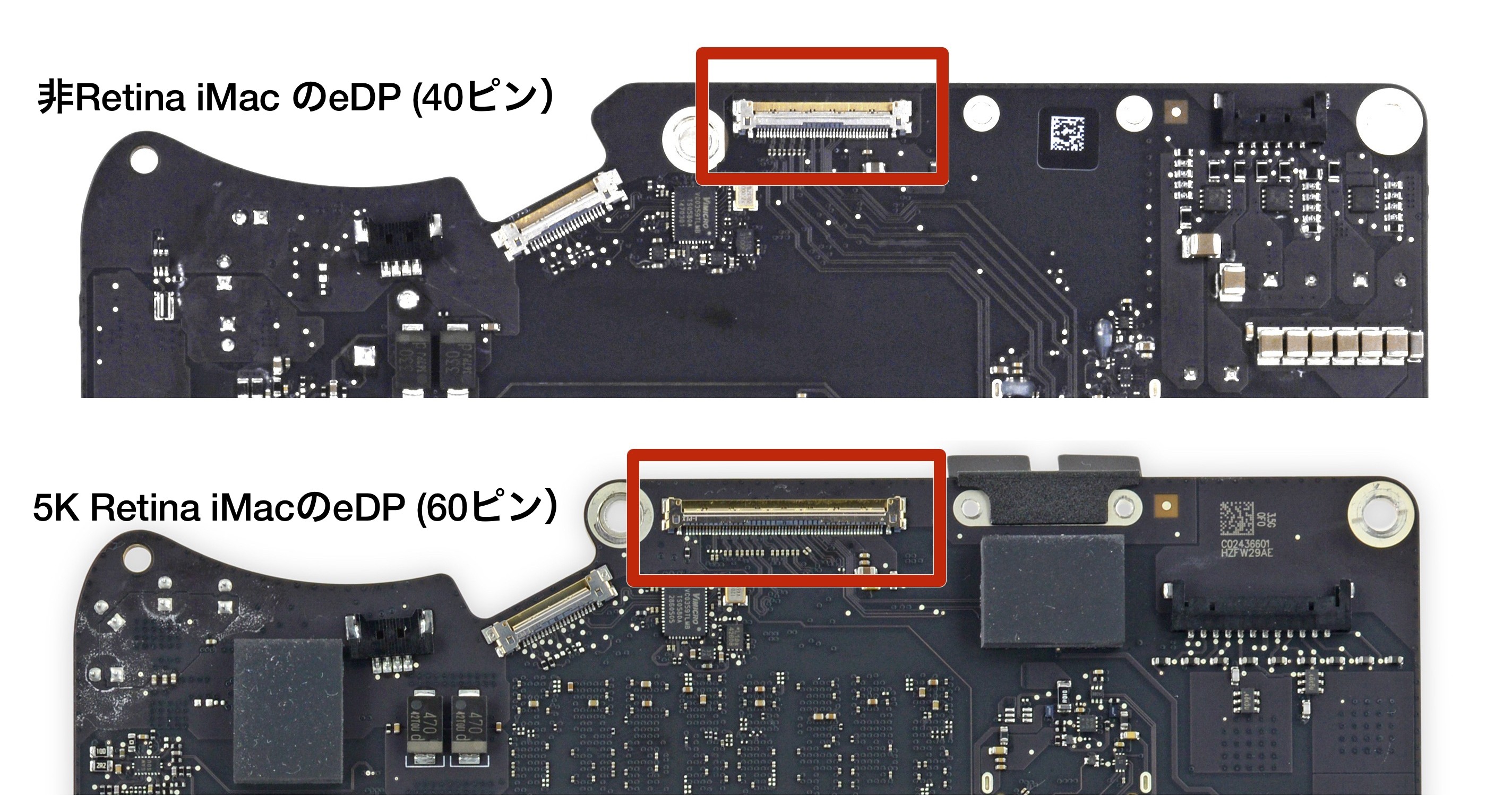 [doublepost=1491404139][/doublepost]Does anyone think its possible the screen could just die from falling off onto a desk ? would it not still work but just with a busted screen/image ? I guess thats an impossible question to ask and only way i'll find out is when i get the new screen delivered.
Z

Looking at it some more did you try and slide the copper looking bracket up stick the cable in then slide it down? Looks like it should move up and down the piece that says 1-PEX. Maybe it doesn't not sure.
M

No. I haven't touched the socket. This is the cable which goes into it. I just push it into the top and then push the little handle down which helps secure it. 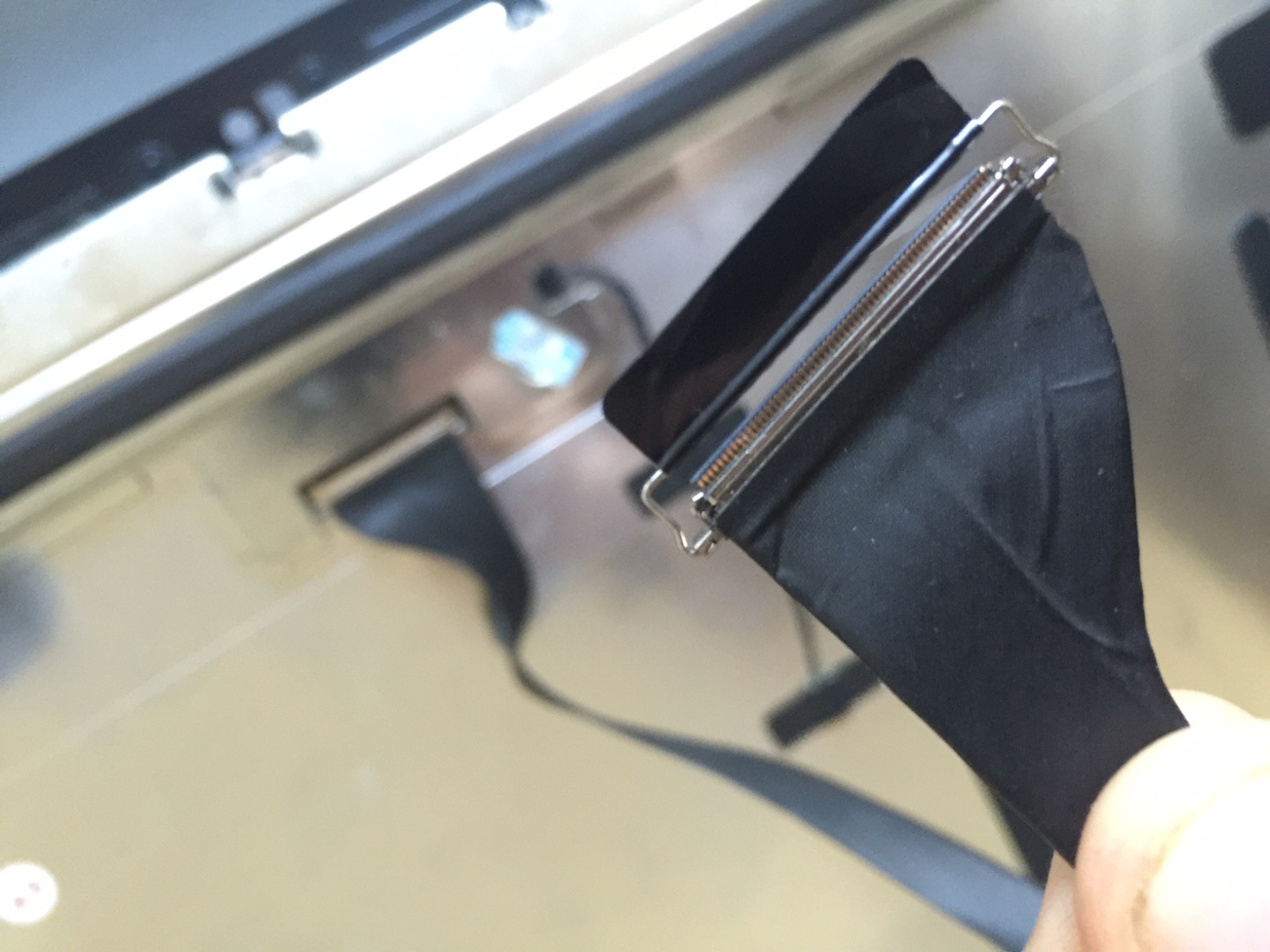 A dropped screen can fail yes.

may have taken out the backlights when it fell.

We have a laptop here at work that fell from back of sofa to the seating bit on its screen.
took the led backlights out, faint image seen if shine light at screen.

moosed I wonder if your guy used a brand new adhesive kit or 'made do'?

If this guy is a 'professional' technician, fair trading rules may well apply, and about £250 I would suggest. Was it a genuine Apple part?