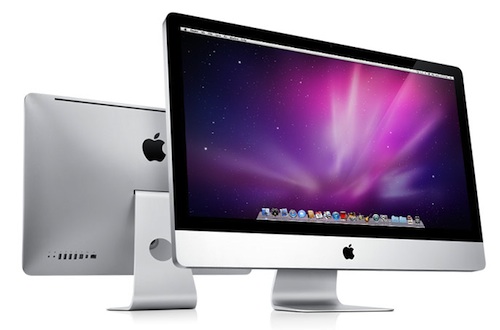 9 to 5 Mac reports that multiple sources, presumably resellers, have noted that supplies of the current-generation iMacs are showing as "constrained", limiting restocking orders. The development is a common one as Apple draws down supplies ahead of the introduction of new models.

We have been told by three people familiar with the matter - all in different countries including the U.S. and an Asian country - that iMac supplies are tightening.
Click to expand...

As noted in our Buyer's Guide, the iMac is due for an update given that it has been nearly nine months since the last refresh of the line took place in late July.

Last month, CNET's Brian Tong claimed to have received information from a source indicating that updated iMacs should debut by the end of April or the first week in May, a window of time that is just now set to open.

One step closer to a MBA refresh.
D

What are these "Macs" you speak of?

My 24" iMac is still going strong... they'll something pretty major to get me to consider getting a new one.

Fairly predictable, still good to hear though. Heres hoping for an i7-2600!
H

I heard a rumor that these will not have a retina display or BluRay. No, seriously. They won't. My source is never wrong.
K

The iMac update is likely to be a spec bump, Sandy Bridge, better Graphics, etc...plus Thunderbolt. I plan to hang on to my current model for now.

I am more excited about a potential Mac Mini Update, because I need one of those.
M

We won't see octo-core until Ivy Bridge. IIRC, for desktop processors, Ivy Bridge will be the first CPU where quad-cores are the bottom rung. And the iMac has been using desktop CPUs for a while (though still SO-DIMMs and mobile GPUs).

FINALLY! I've been holding off for over a year upgrading my 2007 iMac because of the ancient ports. Give me my Thunderbolt!

I think I'm well overdue an update to my old iMac. It'll be good to see another refresh.
H

A relatively predictable spec bump? Performance bumped to exceed the new MBPs (edit: i.e. Sandy Bridge), Thunderbolt replaces the Mini DisplayPort (could conceivably have two, but I doubt it), FaceTime HD. A RAM upgrade seems unlikely but possible. SSD option may or may not move to the MBA one, probably will (to consolidate stock). A new form factor seems unlikely given current precedent; new screen sizes also seem unlikely due to lack of rumours. They could conceivably bring back the 24" (common panel size would mean fewer rumours), but I doubt they will. Thinner profile (especially on the 27") is also conceivable. Maybe they'll make the Magic Trackpad standard? Free upgrade to Lion when it releases?

Edit: As others have mentioned, a bumped GPU is obviously also on the cards.
Last edited: Apr 19, 2011

But I will probably wait the extra few months for Lion. No point in upgrading just prior to what I expect to be a relatively major OS release. I doubt 10.7 will be the $29 upgrade Snow Leopard was.
B

I can't wait! My G5 iMac has officially died and gone to that big computer desk in the sky. It served me well for 5 years, but it's over. Darn thang won't even turn on anymore. I hear the apple start up chime, but the screen stays black and then the iMac just shuts off. But even if I could fix it, it's so old it can't run the latest OSX or even play HD movies. Yup...it's time to buy a new iMac.

I'm hoping that the next update sees i7s across the line...even the 21.5" models. I expect thunderbolt too since the MacBook pros got it. Other things on my wish list would be for them to include that rumored flash start up drive as standard....but I'm not holding my breath. It would be great if the 21.5" model got the same ability as the 27" to be used as an external monitor. That way in 5 years or more when it becomes unable to run the latest software, you can still use it as a second monitor.

I like the 27" features, it's just a tad too big. Actually the rumor about Apple adding a 24" size back to the iMac lineup would be PERFECT. But again...not gonna count on it.
D

Does this mean a Mini update is right behind it?

Apple should do a nice desktop refresh...at least for the consumer/prosumer grade machine, I don't follow the CPU that a Mac Pro upgrade would depend on(although I'd imagine if the lower powered chips are out, higher powered chips would also be out, but one can never be 100% sure)

But iMac and Mac mini bumps would be quite do able!
H

zedsdead said:
The iMac update is likely to be a spec bump, Sandy Bridge, better Graphics, etc...plus Thunderbolt. I plan to hang on to my current model for now.

I am more excited about a potential Mac Mini Update, because I need one of those.
Click to expand...

homsar said:
Free upgrade to Lion when it releases?
Click to expand...

Doubt it. Not unless you are talking about the 14 day or announcement window. Probably along the lines of all machines purchased after WWDC Lion announcement and prior to release have option to get upgrade disc for $9.99 shipping. Unless at WWDC they say that Lion will be out in October.
D

One step closer to a MBA refresh.
Click to expand...

13" maybe, but the 11" doesn't look to be refreshed for a while. AFAIK Intel has as yet not announced a new CPU that is as low power as the Core2Duo in the 11" MBA.

One can't never have enough iMac rumours! What a breath of fresh air.

Please, please, please let the refreshed iMac drop the May 3rd (I *highly* doubt any new iMac's will be released next week).
You must log in or register to reply here.
Share:
Facebook Twitter Reddit Email Link
Register on MacRumors! This sidebar will go away, and you'll see fewer ads.
Sign Up
Top Bottom