Intel and Micron today announced 3D Xpoint, a new class of memory that the companies are calling a "major breakthrough in memory process technology." 3D Xpoint (pronounced cross point) is said to be up to 1,000 times faster and more durable than the NAND Flash storage that's currently used in mobile devices and solid state drives. It's the first new memory chip to come to the market in 25 years.

Intel and Micron say that 3D Xpoint was built to create a non-volatile, high-performance high-capacity storage and memory solution that was also affordable. In addition to being faster than NAND Flash, it's also 10 times denser than the DRAM chips used in computers, which means much more data can be stored closer to the processor and accessed quickly.

A smartphone equipped with 3D Xpoint technology would potentially see much faster performance than a smartphone using existing technology. 3D Xpoint is also versatile -- fast enough to replace DRAM and stable enough to be used for long term storage. Initial capacity is 128 Gigabits (16GB) per die across two memory layers, but future generations of the 3D Xpoint will be able to increase the number of memory layers to improve system capacities. 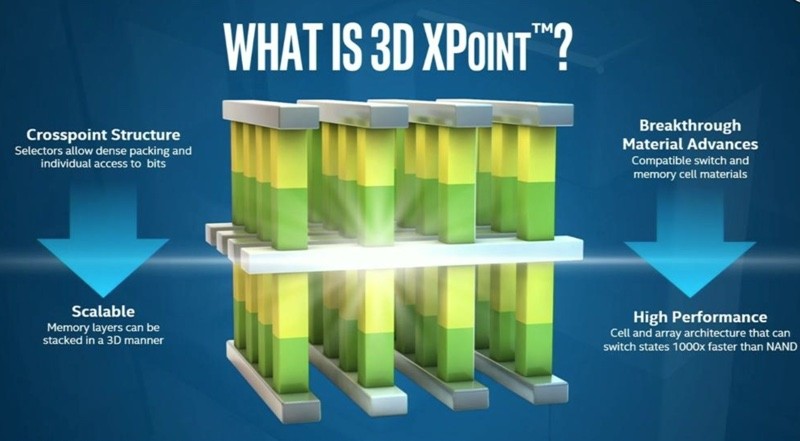 The innovative, transistor-less cross point architecture creates a three-dimensional checkerboard where memory cells sit at the intersection of word lines and bit lines, allowing the cells to be addressed individually. As a result, data can be written and read in small sizes, leading to faster and more efficient read/write processes.
Click to expand...

"One of the most significant hurdles in modern computing is the time it takes the processor to reach data on long-term storage," said Mark Adams, president of Micron. "This new class of non-volatile memory is a revolutionary technology that allows for quick access to enormous data sets and enables entirely new applications."
Click to expand...

As a nascent technology, 3D Xpoint is designed to complement existing NAND Flash and DRAM options because it will likely be too expensive to serve as a standalone option at launch, but in the future, it has the potential to introduce dramatic performance improvements in mobile and desktop products.

According to Intel and Micron, 3D Xpoint samples will be available later this year to select customers, but mainstream use may be a ways off. It is not clear if Apple will adopt 3D Xpoint when it first becomes available, but the company does often aim to implement cutting edge technology in its devices for maximum speed and performance.

Very exciting news! I look forward to seeing the products this leads to.
Reactions: The Doctor11, sshambles, Sandstorm and 6 others
Comment

According to Intel and Micron, 3D Xpoint samples will be available later this year to select customers, but mainstream use may be a ways off. It is not clear if Apple will adopt 3D Xpoint when it first becomes available, but the company does often aim to implement cutting edge technology in its devices for maximum speed and performance.
Click to expand...

I hope this leads to SSDs becoming standard on all PCs.
Reactions: jctech, GoodWatch, Sandstorm and 9 others
Comment
N

it will lead to the end of PC companies. With the availability of SSD drives computers very rarely need to be upgraded. I finally upgraded my PC after 10 years.

Reminds me of the lifetime hull warranty on boats. It killed all of the boat companies...
Reactions: unplugme71
Comment

Only capable of 128GB of storage??
Reactions: SteveBlobs and PowerBook-G5
Comment

This is great innovation, but the important question is when will this be ready for the masses? i'm guessing It wont happen soon.
Comment

WardC said:
Only capable of 128GB of storage??
Click to expand...

In a single die. So, for example, you can fix 4 or 8 in the space of a standard NAND flash die, depending on it's size.
Reactions: Lesser Evets, attila, Jamalien and 2 others
Comment
D

MacRumors said:
According to Intel and Micron, 3D Xpoint samples will be available later this year to select customers, but mainstream use may be a ways off. It is not clear if Apple will adopt 3D Xpoint when it first becomes available, but the company does often aim to implement cutting edge technology in its devices for maximum speed and performance.
Click to expand...

So my 2012 MacBook Pro will be due for replacement in 2018-20 range. So by then this could be in use.
Sweet!
Reactions: Ghost31 and Lordrootman
Comment

WardC said:
Only capable of 128GB of storage??
Click to expand...

so does this replace the ssd and the system memory and make it one solution? is this a shift in hardware architecture? as in making the ssd and system memory the same component on a system board?
Reactions: redscull, Billberryjuice, Sandstorm and 2 others
Comment

... and because a single die can store 128GB of data, more storage fits into a smaller and more energy efficient package.
Click to expand...

And so if the whole is one die, they are saying the max storage is 128GB, not anything greater than on a current iPhone 6.
Comment

surely anyone can appreciate if it's 1000x faster, 10x denser AND more durable it's going to make everything better
Reactions: geenosr, Sandstorm, jamescobalt and 7 others
Comment
T

Apple's about to come knocking with its big pile of cash and a lot of orders to place.

Didn't Tim Cook make sure Apple bought years and years worth of SSDs so competitors couldn't get their hands on them?

And, what happened to that Anobit?? deal with the Apple-owned Flash memory maker in Israel?
Reactions: ardent73
Comment

And... Cloud computing enthusiasts: You're dead on arrival.
Reactions: redscull, Jamalien, Will do good and 4 others
Comment

So 1000X faster? What is the clock speed on the DRAM in the A8 SOC? Because 1000X faster NAND would result in local storage that is nearly as fast as DRAM. That's absolutely insane and means that you could possibly just use your local storage as DRAM if it's durable enough as well. At the very least you could heavily cache things to disk without issue. We probably won't see this until the iPhone 8 at the VERY earliest, but hopefully Macs will see it sooner! It feels good to see some breakthrough technology from Intel.
Reactions: The Doctor11, Sandstorm, Jamalien and 5 others
Comment
I

Enron by the Sea

This could be the next "BIG THING" if what I'm reading is correct. The key word there is NON-VOLATILE. Regular system type ram has never been non-volatile and while it's been faster than either flash storage or SSD drives, you could never swap one for the other without dire consequences. In other words, SSD storage, fast as it is can't compare to regular memory speeds and using regular memory for storage would mean you'd have to keep it refreshed (power to it) making it largely useless for storage as it would be erased the moment it lost battery power and it would be a relative power hog. Here, however, you have the potential to replace FLASH, SSD and RAM all with this new type of memory. Imagine a computer that comes with 5TB of this stuff that is both RAM and STORAGE with no differentiation between the two and now speed drops transferring things. Games would never "load" in the traditional sense again as "loading" is moving data from storage to the main system memory so the CPU can manipulate it. Here, there wouldn't have to be a difference! Even external storage of this type would be as fast as the data bus lines could possibly move it (with current technology), making all current SSDs obsolete, etc. The only issue, of course, is PRICE. I'd imagine, however, that this stuff is going to be so popular that it will change the face of the entire computing industry within a few years time, unless it has a major manufacturing issue. The article mentioned it being designed to be affordable yet throws "too expensive at first" back in your face in the same article so I imagine that will be a limiting factor at first. But long term, storage may change entirely.
Reactions: zauriel, melendezest, redscull and 20 others
Comment

I don't know if anybody has ever priced those PCIe SSDs But I have seen some in the $10,000 - $20,000 range. That may be where this kinda deal is, in the beginning.
Reactions: goldenboy48
Comment
L