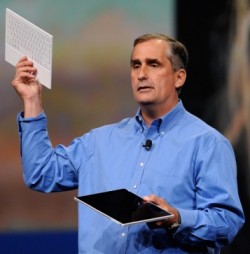 Intel CEO Brian Krzanich appeared today on CNBC's Squawk Box to talk about the financial future of the technology company. Following discussions about Intel's disappointing Q1 forecast and flat PC sales, CNBC anchor Betsy Quick questioned the executive about rumors that Apple may eventually drop Intel chips from its Mac computers in favor of its own processors.

Unfazed by the questioning, Krzanich toed the company line, revealing no new information about the future of Intel's relationship with Apple and simply calling it a "strong" one.

I just hear the same rumors. Our relationship with Apple is strong and their products are great. Apple is always going to choose the supplier who can provide them the most amount of capability in innovation for them to build on, for them to innovate. They're a company based on innovation. Our job is to continue to deliver parts that have that capability give them that, that are better than our competitors. And then they want to use our parts. So I wake up every morning making sure that across the board, whether it's Apple or Lenovo or Dell or any of our customers -- we have to provide the most competitive part: performance, price, reliability, all of those.
Click to expand...

​
In his latest report, KGI Securities analyst Ming-Chi Kuo offered the prediction that Apple may launch ARM-based Macs in the next few years. In this scenario, Apple would replace the Intel chips it currently uses with custom designed A-series chip, allowing the company to better time processor upgrades with new product launches. Apple last year was forced to delay major product launches across its MacBook Air and MacBook Pro lineup, offering only minor processor bumps due to delays in Intel's Broadwell processors.

Rumors of Apple's interest in ARM-based Macs are not new, with earlier reports suggesting Apple has developed ARM-Based prototypes of the iMac, Mac Mini, and a 13-inch notebook model. If the rumor pans out this time, the switchover to ARM processor would initially target low-end machines that would benefit from the low battery consumption of the ARM-based architecture. Future expansion may be possible as improvements in Apple's A-series processor begin to rival the performance of Intel's entry-level offerings.

It better be strong or my love for Macs won't be.

But will Apple use strong-ARM tactics to make things even more advantageous for their products?

You need Flash enabled for the video to play. No thanks, can someone TL;DW the video?

Good. I don't want ARM in my machine. I want to virtualize, don't want to wait for all new apps (that often never come). O yeah, and ARM is good with power? Only Intel can fab at 14 nm and you can bet they are going to be the first to the next node as well.

Haha. Look at the guys face in the vid... 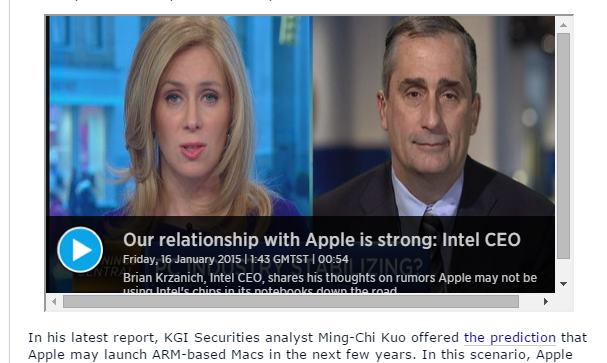 Count me as one who will have bought his last Mac if this goes through (which, given the complexities of recompiling so much software, seems highly unlikely).......
M

intel should be scared. Apple is already at speed parity for the low-end CPUs, and by the time the A10x rolls around, they'll be as fast as Intel's top CPUs.

Apple's ARM A8x cpus are as in the same ballpark speeds as any 10-watt Broadwell CPU. And, given a higher power budget, they could easily go 2-3x faster, putting them in ludicrous speeds. A fully configured 10-core version for a Mac Mini server could even be 10x faster, and wouldn't cost any more than the A8x if they took out the GPU.

Just ship ARM, and have all the vendors just recompile their OS X apps for ARM. No one needs Windows compatibility (I don't know any Mac owner that uses Windows) and the .25% of Mac users that do can go buy an Intel Mac.
X

Outside the low end consumer market, the ability to dual boot Windows is the vital selling point for Macs that enabled their recovery in the enterprise market since the PPC switch. ARM can't do that, so it will remain a non-starter for anything other than the bottom end of the market, for which leading edge CPU development is not relevant.
Z

If you've read the Jobs' biography, you know there's no way they're making that mistake again. The benefits of full control and cost cutting are small. Apple wouldn't want to alienate developers again. Intel does the r&d, drive the chip market and sells them at a relatively cheap unit cost. Apple has much bigger problems on their hands than their desktop/laptop processors.

"performance, price, reliability, all of those."

does that 'reliability' part include completion and release of new chips?

Good to hear. When Apple drops Intel, I will most likely have to drop Macs. That would break compatibility with so many OS X apps (and developers would take a great amount of time to recode their apps, assuming they did at all) and it would break Windows compatibility. As much as I like OS X, I occasionally need to use Windows.

Ofcourse Intel is going to say that. Apple is their customer. Did you expect Intel to say, yeah screw them and their A-chips?

This article taught us nothing.

vmachiel said:
Good. I don't want ARM in my machine. I want to virtualize, don't want to wait for all new apps (that often never come). O yeah, and ARM is good with power? Only Intel can fab at 14 nm and you can bet they are going to be the first to the next node as well.
Click to expand...

Why are you under the impression that ARM cannot virtualize?

OSX is a nice OS for me, but I need Windows for work. Should Intel be dropped, or Bootcamp somehow unusable, I'll have to go back to a Windows system.
S

The general absurdity of this "prediction" just astounds me. As far as Apple analysis is concerned, this Ming-Chi Kuo seems to be more of a professional pasta thrower than an analyst.

UNLESS Apple or ARM make their own x86-64 instruction set, or something 100% compatible (anyone who knows about instruction sets is already beginning to chortle at "compatible"), Intel/AMD chipsets will remain. What I mean by AMD is that IF Apple does drop Intel, they'll go with AMD for their Mac's. ARM? Not in their current form. Perhaps a hybrid new product like the Surface RT perhaps.

Now let me push the envelope even further, but if OSX were to transition to ARM, it would take AGES to do so. Well beyond the life of their Mac lineup in its current form. I can't stress that current form idea enough. It may be very possible that Apple has basically cracked the next big revolution in desktop/laptop, pointer based navigation devices, and they may use ARM chips.

Either way, as if anytime soon, NO. Besides, given enough power, those ARM instruction sets aren't nearly as fast as Intel.
X

mozumder said:
... No one needs Windows compatibility (I don't know any Mac owner that uses Windows) and the .25% of Mac users that do can go buy an Intel Mac.
Click to expand...

I do, as do many of my coworkers. It is a vital feature that makes a huge difference for me. Your post is ignorant, irrelevent, and incorrect, so it is fortunate that your opinion has no influence on Apple's decision making.

I want/need Macs to stay with Intel... Really hope all these these are just made up rumors.

Iconoclysm said:
Why are you under the impression that ARM cannot virtualize?
Click to expand...

It can only virtualize ARM based systems. We will have to go back to emulating if we're to run Windows.
B

I'm sure that Apple has a lab with OS X running on ARM, and any other processor out there - just to see how performance is impacted and how it affects various products.

Given that, will Apple do it? Who knows. One would like to think they learned from the Surface debacle (not to run two processor versions), but it's not out of the realm of possibility - especially if they're considering a new product category - maybe going back to a Consumer/Pro model.

I could even see them expiramenting with duel processors - ARM for low powered tasks and Intel for high powered tasks, possibly in a Powerbook Duo type of product.

In the end, Apple's going to go with what makes them the most money and is right for the largest portion of their audience. And there will be happy people and angry people.

To abandon x86 would be a huge problem for Apple, a company recently bolstering its Enterprise push with IBM.
S

mozumder said:
Just ship ARM, and have all the vendors just recompile their OS X apps for ARM. No one needs Windows compatibility (I don't know any Mac owner that uses Windows) and the .25% of Mac users that do can go buy an Intel Mac.
Click to expand...

I hope you realize it isn't as simple as Adobe running gcc Photoshop.c Photoshop. Most, if not EVERY app uses a host of different open source libraries that will have to be recompiled to support ARM instruction sets. Some of these vendors use thousands of such libraries. OSX itself uses a lot of these libraries. There may be some that are easily recompilable, sure. But there are others that perhaps they depend on, and some those depend on further (and so on) that need to be rewritten perhaps.

This is a transition that'll only happen when there's a completely new product in the works.

vmachiel said:
Good. I don't want ARM in my machine. I want to virtualize, don't want to wait for all new apps (that often never come). O yeah, and ARM is good with power? Only Intel can fab at 14 nm and you can bet they are going to be the first to the next node as well.
Click to expand...

Can the millions of us that use Macs as Macs chip in a little money to buy a PC for that minority of people that want us to hold up progress... all so that they can use their Mac to game
You must log in or register to reply here.
Share:
Facebook Twitter Reddit Email Share Link
Register on MacRumors! This sidebar will go away, and you'll see fewer ads.
Sign Up
Top Bottom