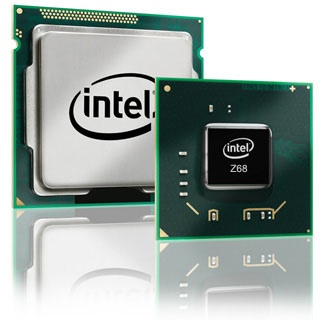 VR-Zone reports (via Hardmac) that Intel has begun production of its new "Z68" chipset for Sandy Bridge-based processors, with availability set for May. Most notably in light of rumors regarding the new MacBook Pro that failed to materialize, the Z68 chipset will support Intel's Rapid Storage Technology SSD caching.

Interestingly, Intel has also started production of their Z68 chipset this week along with other Cougar Point SKUs like H61 and Q65. All of them are based on the new B3 stepping therefore the SATA port 2-5 issue is fixed before they hit the market. Judging from the specs, it seems Intel has catered Z68 specially for enthusiasts which allows better processor overclocking, discrete graphics support and SSD caching capability.
Click to expand...

SSD caching marries a conventional hard drive to a relatively small solid-state drive (SSD), with the most frequently-accessed data automatically placed on the SSD for fast access while the two drives appear to users simply as a single drive. The functionality serves to bring users much of the speed benefit of SSDs but with the storage capacity and lower cost of traditional hard drives. 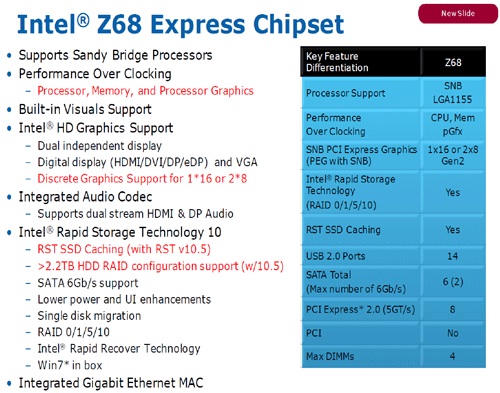 Several rumors in the days leading up to last week's MacBook Pro refresh claimed that the updated models would offer a dedicated SSD to host the operating system and other essential files. The claims did not, however, come to fruition.

It's not like they're going to incorporate this anytime soon anyway. This solution is handy because SSD's are still kinda expensive, but I think it would be better to bite the bullet and buy an SSD even if it's not that big.

I thought this is a chipset for desktops.
J

New BTO MBP with a 256 SSD on order and it's already out of date.

And so it goes.

Jarbo said:
New BTO MBP with a 256 SSD on order and it's already out of date.

You should be excited about the blazing new performance of you coming MBP. These chips aren't going to be in a Mac next week. You will have the latest and greatest for a while - enjoy

Give em 5 years and we'll have a computer on a chip from intel for laptops complete with storage, graphics, processing, memory, and several thunderbolt ports.
A

Maybe for the MacBook Air?
L

This has been around for years

Obviously nobody remembers Turbo Memory. This is just embedding it into the board.

It did very little to improve performance and actually hurt performance in several areas.

Ummm... no. The Macbook Air has an ALL SSD drive already, that's why they seem so fast despite slow processors. The idea here is to give the Pros the benefit of the SSD speed (for the OS) paired with the huge capacity of conventional drives (1 TB etc.)

Coming to next MBP on this holiday.

Cool! I wonder if Apple will use this next year?

I'm quite confident that we'll see another refresh of the MBP some time in October 2011.

I was really hoping for the SSD for the OS rumor... I thought that would have been great... but looks like it might be more widespread soon.

Kinda makes me glad I held out in getting an SSD for my MBP. It's still a very nascent technology and there's still tons of improvements being made over a short period of time.

I think I might just hold off on it for another 2-3 years when it's time to upgrade the computer. For sure SSDs will be likely mainstream by then.
W

Is this not a desktop chip?

Even so as someone else mentioned most people would be better off biting the bullet and installing a true SSD suitable for their needs. Since most people don't need a lot of storage on a fast disk this should not be a problem.

Under the light of this news...

THIS IS FOR DESKTOPS

H67 is also currently available with on-die GPU support but you can't overclock memory like you can on a P67 chipset.

Jarbo said:
New BTO MBP with a 256 SSD on order and it's already out of date.

Nope, this will be for those of us who continue to live in the world of HDDs with spinning platters. That new MBP w/ SSD is still golden.

This has limited uses. Enthusiasts will be disappointed by the SSD size in hybrids and just use separate SSD and platter HD. For the average consumer the 64GB should be the standard and only drive in a computer.

Most people's total files do not take up more than a DVD. The vast majority of space is taken by apps and OS.

Not by there photos, videos, and music?
S

Not exactly exciting when you really think about what this means.

This has limited uses. Enthusiasts will be disappointed by the SSD size in hybrids and just use separate SSD and platter HD. For the average consumer the 64GB should be the standard and only drive in a computer.

Most people's total files do not take up more than a DVD. The vast majority of space is taken by apps and OS.
Click to expand...

Can't you put there as big SSD as you want? This allows you to create your own hybrid drive as there haven't been any good ones in the market. IMO this is pretty interesting feature but I want to see it in action before making any further conclusions.

I knew there was a reason I didn't jump and and buy a new mbp this week.
S