question for those of you who travel a lot and rent cars: do you hate switching what side of the road you have to drive on or is that something you get used to and barely even think about it?
Q

I drive both right and left-hand drives with about equal frequency, so no difference these days.
Comment

To be honest, it takes me a at least a day or two to get used to it each time I do it - firstly, when travelling someplace where driving takes place on the 'other' side of the road to what I am used to, and then, equally, if I have been away for several months, - when I return. It means that I have to concentrate a lot for until I become acclimatised to local conditions; and then have to pay close heed for a day or so when I return.
Comment

My first time in London, at the welcome cocktail party for the group, the tour directer warned us to always look right when stepping off a curb.

First walk about London the next morning, I looked left, and almost got gathered-up by a taxi.

I have no trouble with driving in the UK, it does feel strange but, no major problems.
But as a pedestrian I am constantly stepping off the curb after looking the wrong way.
Comment

iJohnHenry said:
My first time in London, at the welcome cocktail party for the group, the tour directer warned us to always look right when stepping off a curb.

First walk about London the next morning, I looked left, and almost got gathered-up by a taxi.

Macky-Mac said:
you're not alone in that experience
Click to expand... 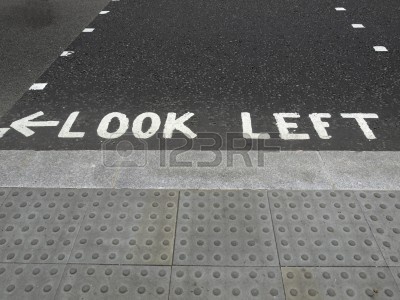 Divided road with pedestrian median in the middle

I don't find driving on the opposite side of the road a problem; what I do find hard to get used to is the location of things in the car.

Most of my driving overseas was done in Australia. So when I had the car, not only was I not used to the licenses down there (they separate them out by type of engine; if you have a manual, you could drive a manual and an automatic; if you had an automatic, you could only drive automatics. Your license would indicate such), but also where what was located where in the car.

I could get used to the gear shifter in the middle between the seats; cars here in the US have had those for a while.. but switching gears in a manual transmission car with your left hand was weird! Second, the windshield wipers were on the left side of the steering column, while the signal indicator and column adjuster was on the right side of the column. I get to a 4-way stop, instinct kicks in, and flip the left switch thinking I'm signaling, and I turn on the wipers instead.

Other than that, it didn't take long to get used to the other side of the road.. in fact, it was easier.

Travel In The Era of the COVID-19 Outbreak