Apple today announced that iOS 14 features an all-new Translate app for translating conversations, with support for 11 different languages at launch and an offline mode for private voice and text translation. 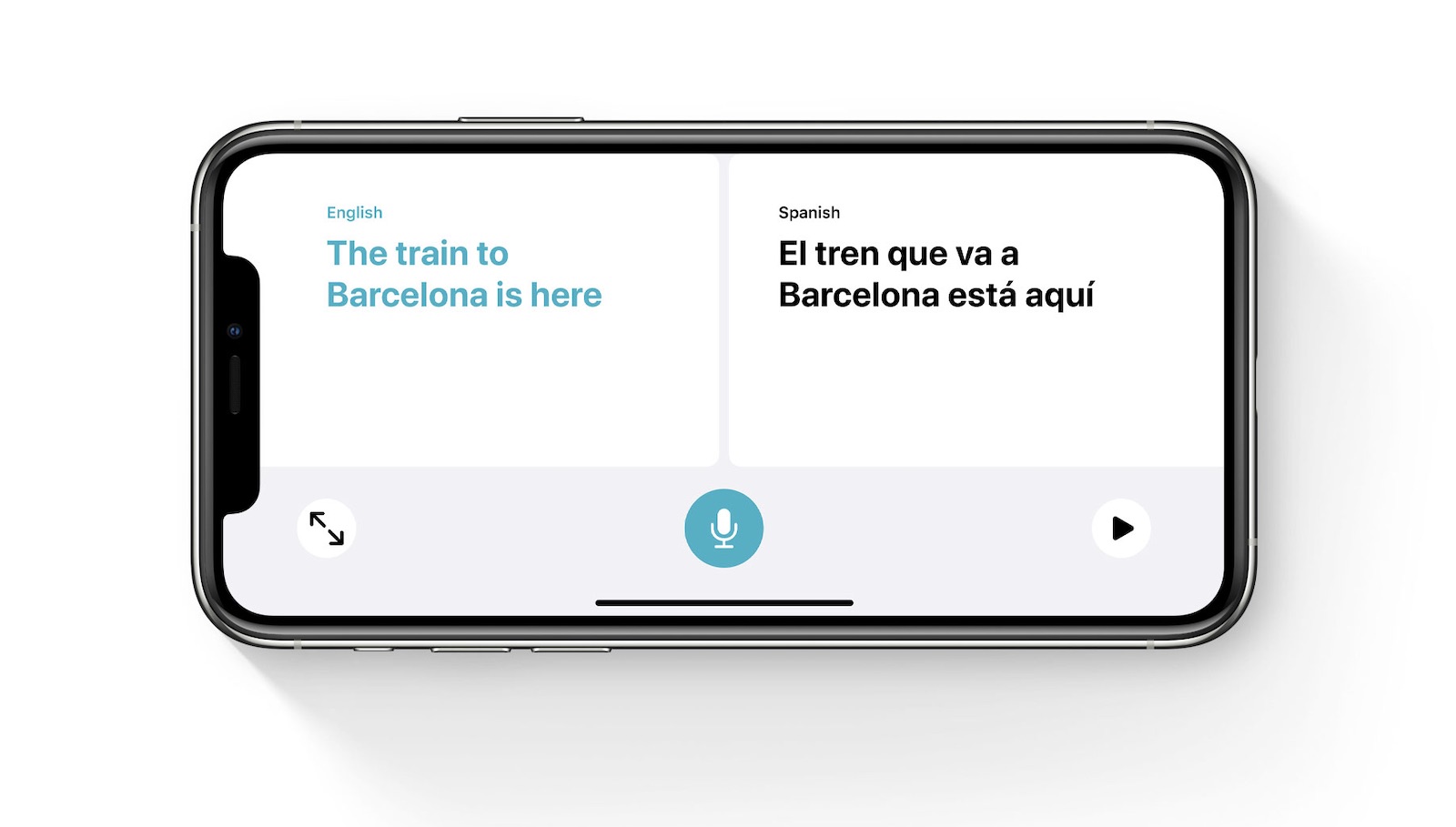 When you place your iPhone in landscape orientation, a microphone button appears as a quick way to begin translating. The side-by-side user interface makes it easy for two people to have a conversation in different languages.

Here's how Apple explains the feature:

Users can save translations in the Favorites tab, which also displays a recent history.

iOS 14 is available in beta for registered Apple developers today, with a public beta to follow next month. The free software update will be released in the fall for the iPhone 6s and newer.

This is very useful, looks sneaker than Google's effort - if I can ever visit Europe again especially so
Reactions: udontno

As someone who speaks multiple languages I resent this feature

Hopefully the speech recognition is better than implemented in Siri. Otherwise this may cause multiple international incidents.
Reactions: 123 and bugFinder

Still waiting for Siri to recognize the language I’m dictating text in, e.g. when sending a message using Carplay...or for Siri to read out a received message in the same language it was written without messing up pronouncation.
Reactions: Tymmz, S G, rolandopr and 1 other person

C'mon. The Federation had this in the 1960's
Reactions: MadeTheSwitch

Hopefully it is more accurate than the Hungarian Phrasebook.

If this works as well as Siri I'll be insulting people around the world in no time....😐
Reactions: ephemeralreason and MadeTheSwitch

Cool, the more Google products I can remove from my iphone the better ! Did they happen to mention which 11 languages they are supporting?

HiRez said:
What languages are supported?
Click to expand...

Watch the video. English, Chinese, Spanish, and many more.
[automerge]1592855036[/automerge]
For those that don't know, this is a direct competitor to Microsoft Translator and Google Translate (Which doesn't work in China, unless you have already downloaded the language). If you travel a lot as I do, this is a well-needed feature, ESPECIALLY offline because you do not always have access to Wifi or Cell in China, Spain, Italy, let along many remote areas of Asia. It will be interesting to see if they add, Picture translators, which both aforementioned have and is important when ordering food off a menu (Did I just order Dog!?).
Reactions: TropN, Konigi and HiRez

Looking good! I hope it comes to macOS too thanks to Mac Catalyst.
Reactions: S G

I wonder who they will license this through to have off-line translation?
I tried to translate a lot of text once and the software was expensive to do it off-line.

I hope the ‘Portuguese’ available on this app is authentic European Portuguese and not Brazilian “Portuguese” that many apps and services pass off as Portuguese without distinction. It’s really insulting to be a European Portuguese person and have your national identity and language constantly misrepresented as something even you have trouble understanding much of the time.

I work in a school district, and this would be good for foreign language classes, English language learners, etc.

velocityg4 said:
Hopefully it is more accurate than the Hungarian Phrasebook.

filemakercowboy said:
C'mon. The Federation had this in the 1960's
Click to expand...

Not to mention Douglas Adams with his ear-mounted fish.

cmaier said:
Not to mention Douglas Adams with his ear-mounted fish.
Click to expand...

babelfish.altavista.com was the first translation site I used way back a long time ago.

PBG4 Dude said:
babelfish.altavista.com was the first translation site I used way back a long time ago.
Click to expand...

I remember that. But that means we are old.
Reactions: PBG4 Dude

I don't care for another translator… what I really need is a UI overlay that can translate apps without multi-lingual support. For example, many useful apps in Japan are not made available in English—or when they are made in English, have features cut down from the original app.

In addition, some websites use images with burned-in text as buttons, so a UI overlay with text-recognition would be most helpful where meta-data or text doesn't exist.
P

There is no app translater for Ipad...
Reactions: Night Spring

Pedro Simões said:
There is no app translater for Ipad...
Click to expand...

yeah, makes some sense. It's meant to be interactive, where you and the other person are looking at it while out and about.

Would be nice to have on iPad in some situations though.
C

I've been playing around with this translator app for the last day or so and I have to say it is surprisingly good (at least with French and Spanish). Fast too.

cjboffoli97 said:
I've been playing around with this translator app for the last day or so and I have to say it is surprisingly good (at least with French and Spanish). Fast too.
Click to expand...

I'm finding it to be very good with german so far. (though i've only taste it in german->english. I'll play around with the reverse later).
P

The translator built into the safari works very well on the Ipad. Microsoft translator blacked out.
You must log in or register to reply here.

iOS 14: How to Translate Webpages in Safari on iPhone

Twitter Tests Automatic Translation for Tweets in a Different Language

Safari in iOS and iPadOS 14 Might Include Built-In Translator, Full Apple Pencil Support