The newly released fourth beta of iOS 15.4 introduces the anti-stalking AirTag changes that Apple announced earlier this month, providing a setup warning that using an AirTag or another Find My-linked item to track someone without consent is a crime. 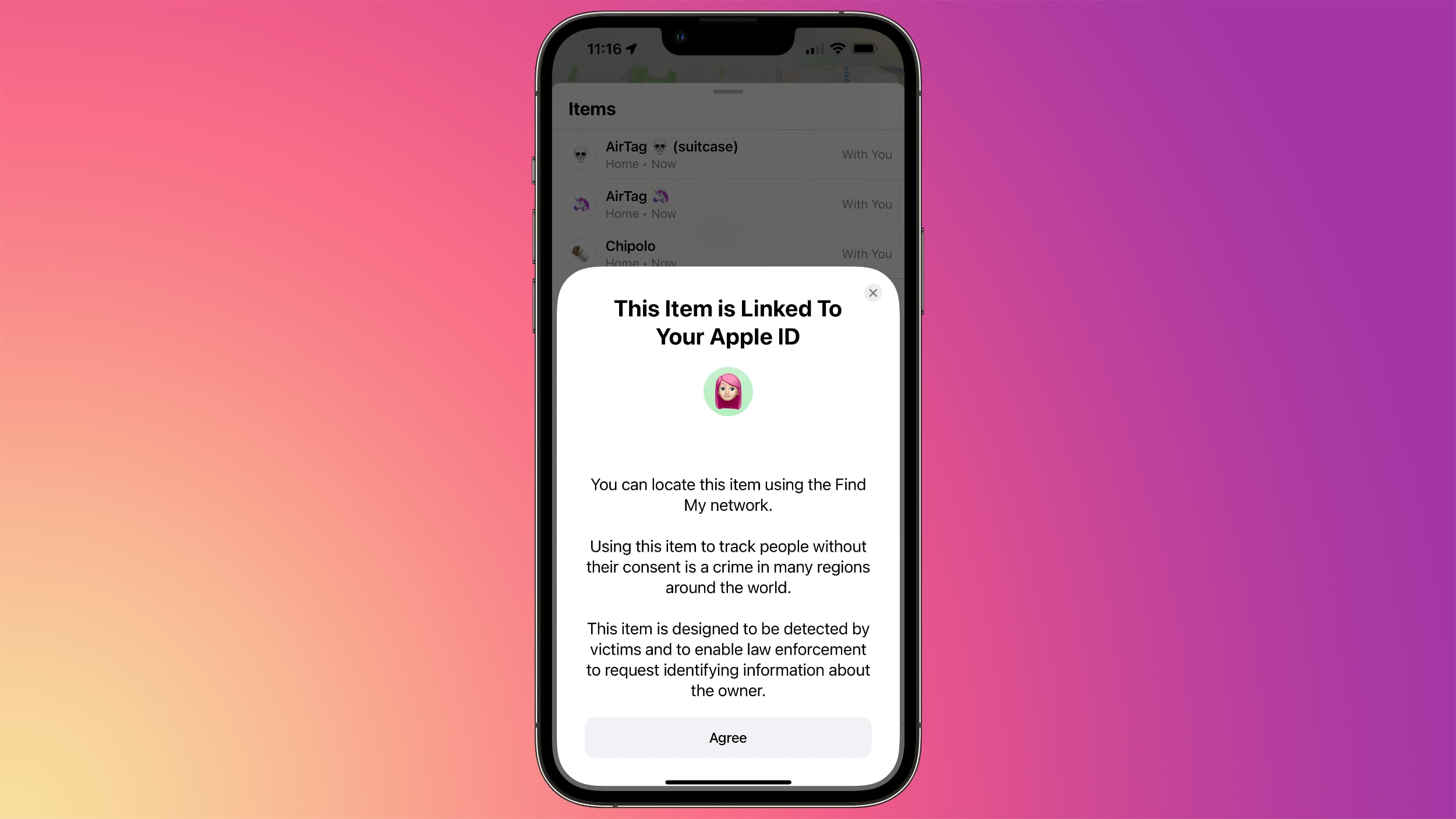 "You can locate this item using the Find My network," reads the setup screen. "Using this item to track people without their consent is a crime in many regions around the world. This item is designed to be detected by victims and to enable law enforcement to request identifying information about the owner."

With this warning, Apple wants to make it clear to those who would use AirTags and Find My-compatible devices from third-party companies as stalking tools that such a use case is illegal and has criminal repercussions. Apple earlier this month said that the warning would be added to an upcoming update.

Apple also said that it would address a bug that was causing confusion around unwanted tracking, a change that is also likely in the new beta. AirPods can cause an "Unknown Accessory Alert" warning that some people were interpreting as a notice from an AirTag. ‌AirTags‌ are not able to display the "Unknown Accessory Detected" messaging, which is caused by AirPods Pro, AirPods Max, third-generation AirPods, and in some cases, a Find My network accessory.

Going forward, Apple is making sure that all accessories properly identify themselves so there is no more confusion about non-AirTag devices.

We have confirmed the messaging changes are in the current iOS 15.4 beta, and Apple has also made some other minor tweaks as well. In the Find My app, there is no longer an option to toggle off "Item Safety Alerts," with Apple instead offering "Customize Find My Notifications" and "Customize Tracking Notifications" options. 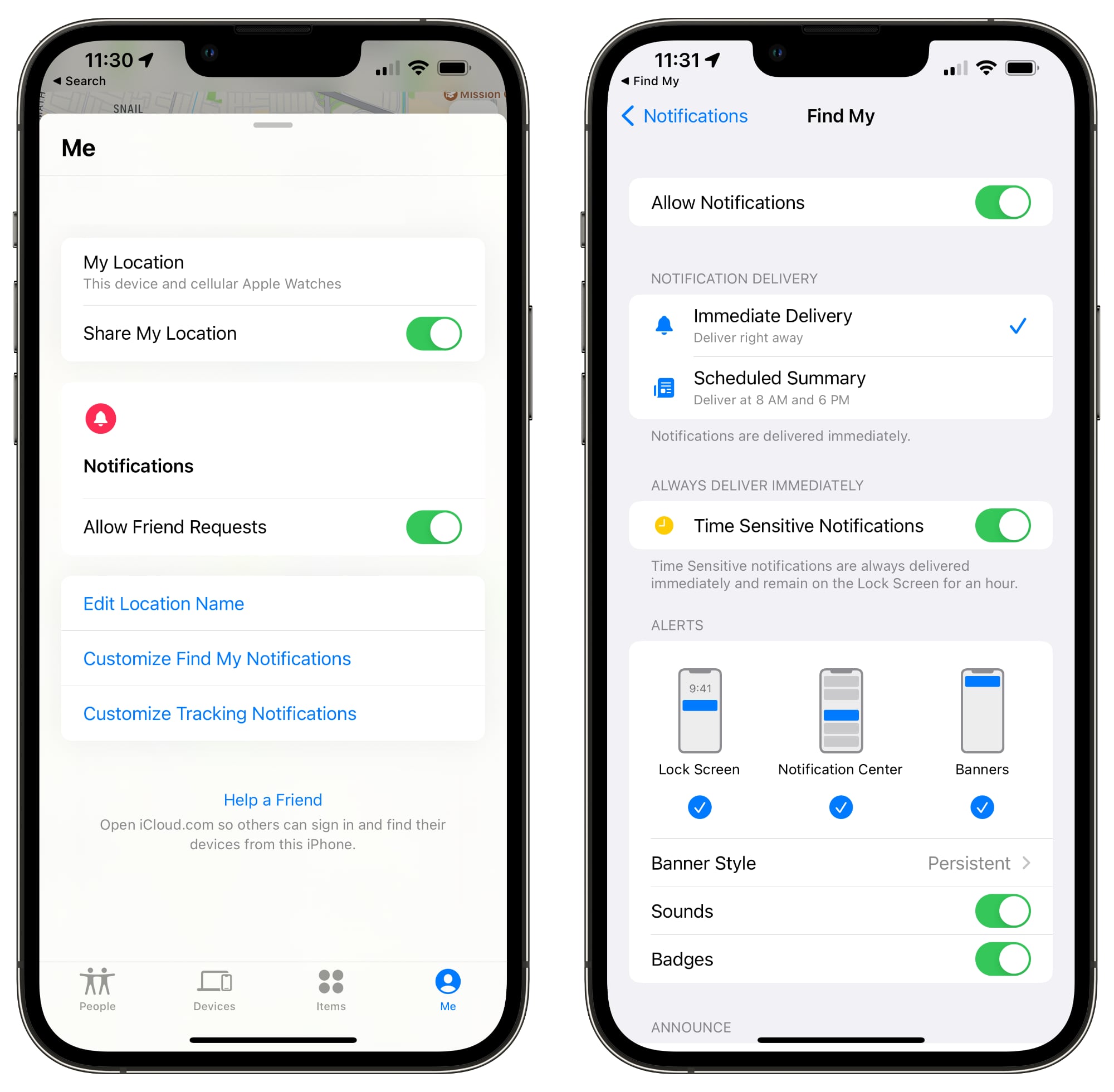 At the current time, both of these options redirect to the Notifications options for the Find My app, and it's not clear if Apple will change that in the future with more granular settings to select from.

Later this year, Apple plans to introduce additional anti-stalking measures that include support for Precision Finding for unknown AirTags, display alerts that pop up whenever a sound is played, and louder AirTag sounds.

Soon enough they will cripple it to be just another Tile...
Reactions: Babygotfont, Artemis70, jimbobb24 and 1 other person
H

This will make it harder for my old lady to see when I’m stepping out on her
Reactions: Curiousdump, Babygotfont and nfl46

"Using this item to track people without their consent is a crime in many regions around the world."

This could help a bit, but it won't change the fact that there are many ways for ill-intentioned people to track someone, with AirTags or with other devices.
Reactions: Babygotfont, deeddawg and BlueParadox
K

The controversy over AirTags led me to look more closely at Apple's description of how the Find My network operates. I've become more concerned about what location and device information Apple is collecting and aggregating than the ability to more finely manage AirTags.

Having said that, any increase in the ability to reveal potentially hostile AirTags is good.
Reactions: Babygotfont and turbineseaplane

This is honestly a great addition to the AirTags.
Reactions: Compote, aesc80, subi257 and 6 others

”If you have purchased this Airtag to track a person without their consent then we recommend that you return it to your nearest Apple Store and instead use a technology better suited to the task, such as Facebook.”
Reactions: NoelWalker, Ghost31, Dopestar and 12 others

They need to make some hardware changes too. If someone tries to tamper with the speaker, it needs to deactivate the whole thing. I do think updated AirTags are coming soon with the amount of pressure Apple is facing with this.
Reactions: bLackjackj, michaelnugent, AirTags and 3 others
N

“Let’s invent a tracking device that uses our FindMy network”
“Ok - go for it”
,
,
“We’re finding that people are using the tracking device to stalk other people and to steal vehicles”
“Ok, put a warning on the splash screen that that’s illegal”
Reactions: Ghost31, snek, Sir_Macs_A_Lot and 4 others

dannyyankou said:
They need to make some hardware changes too. If someone tries to tamper with the speaker, it needs to deactivate the whole thing. I do think updated AirTags are coming soon with the amount of pressure Apple is facing with this.
Click to expand...

On the topic of hardware changes... I wish there was a much flatter profile of AirTag, so I could track my wallet. Even if that means it becomes disposable due to the type of battery it has to have, I'm good with that.
M

This is a really tricky issue to solve. It honestly never occurred to me that they'd be used for nefarious purposes before they'd released it. I just wanted to find my keys/dog/wallet/car in a parking lot.

It's super useful for the few things I use it for, but this criminal element.... It may just not be worth Apple's effort. Perhaps they put a button on the next AirTags that let's it speak the name of the device it's paired to (so the tracked person can at least provide proof to an authority it was their crazy ex-boyfriend or whatever)... I dunno.
Reactions: subi257, michaelnugent and lowkey
B

Each update to address anti-stalking makes AirTags less useful as an anti-theft tracking device. I realize Apple never advertised this use case but it's unquestionable Apple knew many would buy them for this purpose.
Reactions: Hajj.david, macguru212, Oscar_440 and 5 others
S

TheYayAreaLiving ? said:
This is honestly a great addition to the AirTags.
Click to expand...

They'd better implement a pet feature so you can share a tag with your family, that helps to prevent getting bombarded with 'stalking' messages.
Reactions: DominikHoffmann

It should be auto-reported to the police if anyone tracks you without your consent.
Reactions: subi257, MTShipp, snek and 3 others
S

Hey Now said:
This will make it harder for my old lady to see when I’m stepping out on her
Click to expand...

She mentioned that the other day while she was making me breakfast...
Reactions: Curiousdump, subi257, deeddawg and 4 others
C

You’ve probably heard of the infamous rule 34, but we’d like to propose a new rule — call it rule 35: Anything that can be used for nefarious purposes will be, even if you can&#82…

It still does not address any issues for people who do not have an iOS device. Android users can still be freely tracked without knowing.

Like I said before in another thread, which so many people were angry about, Apple should have worked with google and paid them to implement the automatic notifications if someone is tracking them with an AirTag. It would have been the responsible thing to do.

To ask Android users to download an app and scan for trackers is ridiculous.
Reactions: bcollett, whatgift and Baritone_Guy

atomwork said:
It should be auto-reported to the police if anyone tracks you without your consent.
Click to expand...

I agree, in fact — a missile should be launched at your device. I mean, apple's ecosystem is never wrong...
Reactions: Artemis70 and aggiesrwe03

Hey Siri, find a region around the world where using this item to track people without their consent is a not crime. #scsm
Reactions: MTShipp and bcollett

BootsWalking said:
Each update to address anti-stalking makes AirTags less useful as an anti-theft tracking device. I realize Apple never advertised this use case but it's unquestionable Apple knew many would buy them for this purpose.
Click to expand...

Exactly what I was thinking. If I put this on my bag or suitcase which is stolen all the thief needs to do is look for an AirTag nearby and disable it. Kinda defeats the purpose of having it in the first place.
Reactions: Artemis70
L

jopiek said:
They'd better implement a pet feature so you can share a tag with your family, that helps to prevent getting bombarded with 'stalking' messages.
Click to expand...

Yeah this is a real pain. The ability for two apple IDs (or more) to track the same AirTag would be so much better.

If our dog gets out when I’m not there my partner has to call me and I can play the sound or see where she was last.
Reactions: Oscar_440 and bcollett
L

When I had a Tile, they never had all this warning stuff. I used it on my cat's collar. lol
Reactions: bcollett and Robert.Walter

atomwork said:
It should be auto-reported to the police if anyone tracks you without your consent.
Click to expand...