iOS gameplay capture platform Kamcord has announced it has secured over $1 million in funding and is introducing new features for users such as a community website to browse videos on the service and a new UI for developers allowing them to upload playlists and share videos, reports 9to5Mac. Other new features such as likes, comments, and user profiles on the service's website will begin to roll out in the coming weeks. 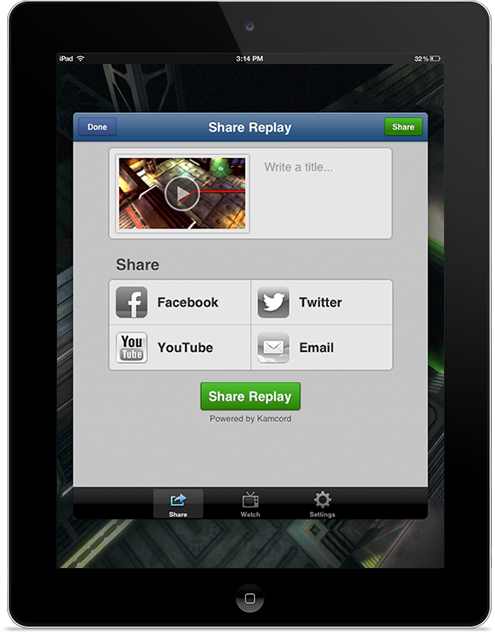 We spoke with CEO Matt Zitzmann about some new features coming to the service today and he also filled us in on the progress the company has made since rolling out a new voice overlay feature back in June. Not only has the service reached an impressive 1 billion gameplay videos recorded (up from 500 million in June), Zitzmann also tells us the company is experiencing developers switching from rival in-game recording platforms due to a much higher rate of gameplay videos shared to social networks.
Click to expand...

With its additional $1 million in funding, Kamcord now has total seed funding of $2.5 million, with investors such as Google Ventures, Y Combinator, and Merus Capital. The service currently supports over 70 games and offers its SDKs for free on its downloads page.

I'm curious - with the sandboxed nature of iOS, especially for 3rd party apps, how does an app like this even work? Or does it require a jailbroken device?
F

NightFox said:
I'm curious - with the sandboxed nature of iOS, especially for 3rd party apps, how does an app like this even work? Or does it require a jailbroken device?
Click to expand...

it only works with games that include their framework
S

Last I heard, they were live in over 115 games. Kamcord is an SDK. So developers integrate the SDK into their game which allows users to share the gameplay that's recorded.

I could think of better things to do with $2.5 million

Parystec said:
I could think of better things to do with $2.5 million
Click to expand...

Like develop a good gameplay capture software for OSX

I guess I'm either confused or late to the game. Besides commercial uses ("Here's a walk through of how to beat King Koopa") what is the point of recording yourself playing a video game?
You must log in or register to reply here.
Share:
Facebook Twitter Reddit Email Share Link
Register on MacRumors! This sidebar will go away, and you'll see fewer ads.
Sign Up
Top Bottom