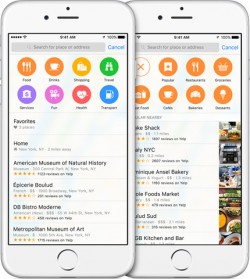 Apple has extended the 'Nearby' feature in its iOS Maps app to serve users in Japan, bringing access to local points of interest such as bars, restaurants, health services and shopping centers.

AppleInsider reports that 'Nearby' is now active across the country, despite Apple having not yet updated its Maps feature availability web page to reflect the change. Apple reportedly introduced 'Nearby' to Japanese customers last December, but soon pulled the feature for unknown reasons.

'Nearby' lets users search Apple Maps based on categories such as Food, Drinks, Shopping, Travel, Services, Fun, Health and Transport, while each category can be searched deeper for specific places.

Nearby categories such as Food, Fun, Shopping and Travel can also be accessed from the Spotlight Search menu on iOS 9.

The location-based feature first appeared on mobile devices in the U.S. and China with the release of iOS 9 in September. A month later, 'Nearby' was extended to Australia, Canada, France and Germany. Finland, Netherlands and the UK soon followed, making Japan the tenth country to receive the localized feature.

Hmm. I was wondering why the feature suddenly disappeared from my phone.
H

Strangely enough, this works for me as well in Denmark. Even though Denmark is not officially supported. Saw it first time 2 weeks ago in beta 6 and has been there since. Both in Siri suggestions and Maps search bar. And iPhone set to danish language and Denmark as location. Has not turned up on spouse´s and kids iPhones though, even after upgrading to 9.3.
Reactions: Fzang

Can confirm that nearby features now work in Denmark, although it only seems to be four out of the eight categories that are actually available.

It appeared briefly for me, several months ago, but disappeared again after a few days.

Now if we could just get transit directions here in Japan.
Reactions: acidsoul and japanime

Absolutely. One of the things I want most from native iOS services. The third-party Japanese train apps with their in-app shakedowns are ridiculous.
Reactions: acidsoul
O

It's now active in Switzerland as well.
T

ozthegweat said:
It's now active in Switzerland as well.
Click to expand...

I second that! I used to have when I was close to the border (i.e. in Basel) but since Saturday I've been seeing it in Spotlight. It's only today for me that it started appearing in Maps search as well (before you could only choose what Spotlight would suggest left of the Home Screen and not search the POIs directly in Maps).
H

Fzang said:
Can confirm that nearby features now work in Denmark, although it only seems to be four out of the eight categories that are actually available.

It appeared briefly for me, several months ago, but disappeared again after a few days.

Looks like the categories change over the course of the day. Breakfast search in the morning, bars in the evening, etc. If you have an iPhone Plus turning it in landscape displays more categories than four.

Ahhhh, now it makes sense. Didn't see this before.

There's an app for that (Google Maps).
D

Works for me to in Denmark.
Anyway to add places?

a0me said:
There's an app for that (Google Maps).
Click to expand...

that is easy. Whatever you are looking for is by a Lawson or a family mart.

If in say Okinawa, I can get more specific. most places you will be using 58 or 330 to get there in some way..


Train check out at least the apps that have a decent map of the system. Only see Tokyo every couple years so these of real help to me. Times not really an issue. To me anyway...most run on frequent schedules. Only timed trains I like to catch are the monorail from haneda (express one liked) or the express train out to chiba area for Disney or a bit further to the huge ass convention center where things like autosalon is held.

After updating to 9.3 yesterday, it appears that we now have it in Austria too.