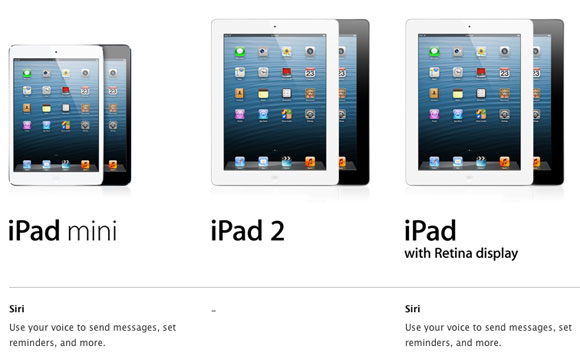 Apple's iPad comparison page shows the spec details between the iPad mini, iPad 2 and iPad with Retina Display. Of interest, the iPad mini supports Siri while the iPad 2 does not, despite sharing the same Dual-Core A5 processor as the iPad 2.

Before the launch, there was some speculation that there may have been technical reasons why the iPad 2 was not capable of supporting Siri. The new iPad mini does have internal improvements over the iPad 2 but does share the same A5 processor. It may also be possible there could have be microphone improvements with the new device, but Apple hasn't specified.

I believe that is an improper use of words.
M

I'd say it's a licensing issue. Only devices created after acquisition of the siri company can have the feature, due to legal reasons.
H

Um Apple will probably tell you it's the microphones in the iPad2 being not good enough to do voice recognition or something...
A

I think they want the customer to buy the Mini or the new one instead of the 2 that is why don't allow Siri on the old iPad.

Of course it doesn't....Apple needs people to upgrade duh....

If they didn't hold back features then how could they dupe so many people into upgrades every year,

Really, should we worry about this? Is Siri really all that?
P

The iPad 2 can't support Siri because it is just too thin !!
R

maccompatible said:
I'd say it's a licensing issue. Only devices created after acquisition of the siri company can have the feature, due to legal reasons.
Click to expand...

Regardless of how likely it is, that is the most un-neurotic explanation I've heard about lack of Siri on a device. Well done!
I

Siri is like most fat women  she prefers to wear smaller clothes regardless of how tight of a squeeze they are over something more comfortable.

Apple needs to get their stuff together.

kas23 said:
Really, should we worry about this? Is Siri really all that?
Click to expand...

I find myself using it all the time. It's easier to say "Call my dad" while walking than to Power On >> Slide to Unlock >> Home >> Phone >> Favorites >> Parents' Home >> Call or to ask about places to eat or for directions. It's been quite the lifesaver for me when I find ways to integrate it with my workflow.

Maybe so, but the old new iPad does support it.
No, that's not confusing at all.
M

Is there any reason to get an iPad 2?

It seems as if Apple is doing all they can to discourage the purchase of an iPad 2. They want people to go with the Mini or the 4. Keeping Siri off of the 2 seems consistent with that plan.

musicpenguy said:
It is a licensing issue with Nuance - Apple setup deals for new devices - every iPad 2 has to play by the same rules - that is why there is no Siri
Click to expand...

kas23 said:
Really, should we worry about this? Is Siri really all that?
Click to expand...

I'm afraid Siri won't ever find it's way to second gen iPad. It's a feature for new toys, one of the reasons to pay some extra for those who don't give a crap about processing power or other hardware improvements, because technically good old second gen iPad is easily capable of all the new tricks that it's restricted to, though there's only a few and Siri is the most significant.

TMar said:
If they didn't hold back features then how could they dupe so many people into upgrades every year,
Click to expand...

If they brought every feature to every device what would be the reason to upgrade?
Yes if the sole requirement to support siri was having an A5 chip the iPad 2 would have it however they probably need/want the hardware to have some mics on it therefore no iPad 2 support

The iPad mini Wi-fi only doesn't have GPS, so I imagine the Siri functionality is limited --

"I want to drink coffee"

"Would you like to search the web for 'I want to drink coffee?'"

"Where is the closest coffee shop?"

"Would you like to search the web for 'Where is the nearest coffee shop?'"

"I'm sorry, Mindcrime, I do not understand what you mean."

Will the 2 be going away, with the 3 taking its place, or is the new iPad simply a direct replacement for the iPad 3? Will overstock units be sold as refurbs or what?

On another note, is Siri even that useful on an iPad? I don't own one so I can't speak from experience but I feel like most of Siri's useful functions are phone specific.

FloatingBones said:
It seems as if Apple is doing all they can to discourage the purchase of an iPad 2. They want people to go with the Mini.
Click to expand...