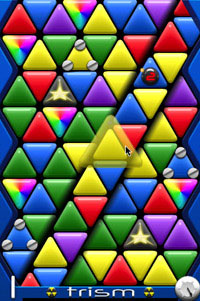 Trism developer Steve Demeter revealed at a conference that he had generated $250,000 in income from his popular iPhone game since its launch on July 11th.

Trism is a gravity based puzzler which generated some press ahead of the App Store launch. The game is played as follows:

Trism presents the player with a playifeld populated by colorful, triangular tiles or trisms. The rows of trisms can be slid in six different directions (thanks to their triangluar shape) in order to achieve a match of three or more like-colored pieces. When a match is made, the like trisms disappear and surrounding trisms fall in to fill their place in the direction of gravity.
Click to expand...

Trism is available from the App Store for $4.99. At that price, Trism would have had to have sold over 71,000 copies to generate that level of income, or an average of almost 1200 copies a day.

Wow! Good for him! Now I need to come up with something unique that people would buy...oh, and learn how to make that program...
Comment
T

That's how it's meant to work.

Good idea, appeal to the masses, cheap price and sell by the boatload...

Now, gotta get my own ideas out there!
Comment
N

Its pretty cool how much cash you can make by selling relatively simple programs for the iPhone. I definitely wish I knew a little programming right about now.
Comment

damn, why do i have to not know sh!!!! about programming.
Comment

with the appstore the iphone was brought to whole new level. congrats
Comment
N

Good to see real reward for inspiration and effort.

This is good news. It's a great game that's really polished considering it was first out the gate. I enjoy it immensely and I'm glad the dev has done reasonably well from it. Well deserved.

But steve if you're reading this don't rest on your laurels! I hope you're hard at work on Trism 2.0 .
Comment

MacRumors said:
At that price, Trism would have had to have sold over 71,000 copies to generate that level of income [...]
Click to expand...

It's really fun yet simple, and extremely stable. A great combo. It's also one of the apps that I've never once regretted buying.

I'm thrilled for the developer for reaping the rewards of a job well done!

Trism is one of my favorite games in a while on any platform. Its great that the app store provides an outlet for indie developers to compete with the major app producers. if your app is good, it'll sell.
Comment
M

VERY well deserved. Trism is, hands down, the best iPhone game out there and the best puzzle game I've ever played on any platform. Glad to see the developer enjoying success.
Comment

Ok, I know Trism is a good game, but this is insane!

Gizmodo is reporting that Trism has already made over $250,000 since its release into the App Store in July. That comes to at least 71,459 sales of the application (after Apple's 30% cut.)

Mod note: This post is the first in a thread that was merged into this one.
Comment

Well deserved. It's a GREAT game!

I see people playing this on the subway all the time. (I used to too -- though now my subway game of choice is Galcon...)
Comment
D

So lets think here. Post taxes they probably made about $175,000 (assuming 30% taxes.) In the credits there are 3 people mentioned. The owner of Demiforce who programmed and drew most of Trism, another guy who designed most of the syllogism levels, and a third guy who rendered the level boarders. So lets say they all got equal shares (I can almost gaurentee they didn't) each one (after two months) earned $58,333.33 Thats probably more then they all were making in 18 months, if not longer then that. I congratulate them on their overwhleming sucess of one of the better games on the App Store.
Comment

played it on the v1 iphone when it was free - was a fun game. looks a bit different now!

Wow, that is awesome!! Congratulations!!