Per Robert Scoble, Silveroffice, Inc. launched a word processor application for the iPhone at gOffice.com (iPhone Link). The web-based application allows you to type into a text field which you can save to a Word document and send it to yourself or to others. 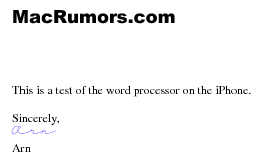 The application offers some addition features, including special headers, text templates, a cursive signature font and live previews. According to a video interview with the CEO, you will be able to upload your own text templates in the next week or so. The application is free, but they do offer a service to print your document and mail it anywhere in the world for $3.

We generated a sample Word Document (download) and PNG preview.

If we had the iPhone up here in Canada *not bitter...at...all* it would be one more reason for me to get it. Now if someone can get a BT keyboard to work with it, and you have the sweetest note taking device.

i dont know about bluetooth, the iphone is pretty limited right now in what it can do in that department
Comment
R

sikkinixx said:
I thought it had a word processor/spreadsheet program on it already though
Click to expand...

No, just readers for .pdf and Word attachments.
Comment

rwdebes said:
i cant see nothing new here.. its easier to right an email and send to me on gmail then use that and send to me using email... pointless.
Click to expand...

Let us hope that it has a proper grammar and spelling check.
Comment
D

The value is when you are stuck miles from home with time to kill you can actually start work on something that needs to be in word format .
Sure you could type it in to email and then cut and paste it later but :
this lets you type and format in landscape,
potentially use your own stationary in word templates,
produce and forward to someone else - secretary etc , a completed letter for printing and snail mailing.
send the completed word documetn , properly formatted to the final recipient.

In short , usefull for all the situations where you currently choose to send email as a word attachment from your desktop - and clearly this happens a lot - hence the need to be able to read word attachments on the iphone.

I'm growing more impressed with Jobs' decision to keep all of the iPhone apps online. It sounded laughable to me, at first. But it does fit in with his overall "mobile office" strategy, where increasingly your computer and storage is virtual, existing mostly online. So far the apps coming out are rudimentary, but that's to be expected at this early stage. What amazes me is how quickly the web apps are starting to emerge. Evidently he was right -- they aren't too difficult to develop.

I think it's also clever that many sites made for the iPhone don't give a home browser an error 404 or other cryptic message. Most of them have a glorious photo of the app on an iPhone and the caption, "This site works only with an iPhone." That's a pretty tempting advertisement, and Apple doesn't even have to pay for it.
Comment
D

agreed - with so many apps springing up its nice to be able to try them all out wihtout wondering what buggy software you may be messing up your new toy with .

I'm not too impressed yet with these new applications that are coming out for the iPhone. Aside from the Trillian effort. I understand that this is the early stages of development, but why wouldn't they give developers the proper info prior to the release? Being in the magazine world, I know that it would have made for much better (even though most of them were all stellar) reviews. This gOffice, though an option, it's not really what I need. Lacking rudimentary options, as most of these early programs are. Doesn't really replace Word from my Treo. I can't wait for Google to port their word processor and spreadsheet. Them and Zoho. I have no doubt that SJ saw the future in web based apps. Woulda just been nice to give the developers of these apps a heads up.

Did anyone here go to the iPhoneDevCamp?
Comment
B

Not only is this the most useful 3rd party web app anybody has made for the iPhone (so far). But the author also has a great sense of humor. For example, choose one of the "useful templates" and find them all not generic but so specialized that one can only smile at the thought of using them. "Thanks for your donation of 30 pairs of scissors, six bottles of glue...". Ha ha. Five stars out of five!
Comment

How well does Google Docs work on the iPhone?
Comment
R

Fiveos22 said:
Let us hope that it has a proper grammar and spelling check.
Click to expand...

Fiveos22 said:
Let us hope that it has a proper grammar and spelling check.
Click to expand...

If you don't care about proper grammar and spelling, then you're more American than you know, my friend.
Comment