Several of the components in the iPhone X are more expensive than their iPhone 8 counterparts, according to TechInsights. The 5.8-inch edge-to-edge display, for example, costs an estimated $65.50, compared to $36 for the 4.7-inch display of the iPhone 8. 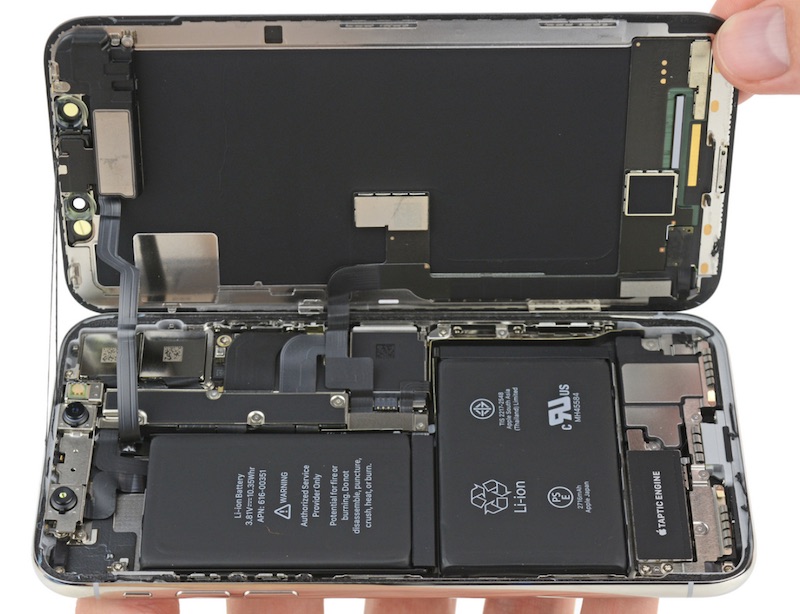 Image via iFixit​
The stainless steel chassis of the iPhone X costs an estimated $36, a significant premium over the $21.50 Apple shells out for the iPhone 8.

Following the launch of the iPhone 8, estimates suggested its raw component cost came in at $247.51, with the cost for the iPhone 8 Plus estimated at $288.08. Those estimates were sourced from IHS iMarkit, a research firm, while today's come from TechInsights, a company that does device teardowns and analysis.

Component cost estimates from companies like TechInsights and IHS look only at the price of raw components and do not take into account other iPhone manufacturing expenses like research and development, software creation, advertising, and distribution. While interesting, these estimates are not an accurate measurement of Apple's profit margin for the iPhone X, nor are they an accurate picture of the overall cost of creating the device.

According to Apple CEO Tim Cook, cost breakdowns are generally "much different than the reality." "I've never seen one that is anywhere close to being accurate," he said in 2015.

wonder how much the R&D was for the FaceID
Reactions: jeffirl, iphonehype, Cameroncafe10a and 24 others

I don't understand why they couldn't sell it for $359
Reactions: ackmondual, Cameroncafe10a, Orlandoech and 31 others
H

This is a garbage analysis. They estimate the display to cost $65. We know that is wrong, as KGI (who is essentially perfect) estimates it at $120 - $130. Given the quality of the display, I would lean toward KGI being correct - we should disregard TechInsights entire analysis.
Reactions: Cameroncafe10a, Essaux, Morgenland and 30 others
H

Goldfrapp said:
I don't understand why they couldn't sell it for $359
Click to expand...

This is crazy - Apple used "secret bolthole" in Jersey to avoid taxes via Panorama paradise papers but expect us to pay even more?
Reactions: Orlandoech, v.kanniainen, SirRahikkala and 7 others
A

so what does that gross margin come out to? They'd still make a killing if they sold the X for same price as the 8+

dmx said:
This is a garbage analysis. They estimate the display to cost $65. We know that is wrong, as KGI (who is essentially perfect) estimates it at $120 - $130. Given the quality of the display, I would lean toward KGI being correct - we should disregard TechInsights entire analysis.
Click to expand...

KGI may be telling you what the RETAIL price of the display would be, not what Apple pays for it.
Reactions: Essaux, bmot, Agit21 and 5 others

I like how people will quote these estimates like gospel and will question the retail price. They seem to forget R&D, shipping of parts, final assembly and delivery to retail. These are all costs that need to be considered.
Reactions: MacsRuleOthersDrool, Flipzide, Luap and 12 others

I find this estimates only interesting for a comparison of differences from year to year, i.e. iPhone 5s vs. iPhone 6s. But just for a 10 minutes lifespan.
Reactions: AsherN, t1meless1nf1n1t, mvereecken and 4 others
J

This really is nonsense. These devices are not constructed from Legos. The aggregate cost of the “bricks” only accounts for the variable costs of production. The fixed costs of production (R&D, marketing costs, etc.) are substantial and also dynamic. The media really sucks when it comes to headlines -and maybe we are to blame for being so succepible to falling for clickbait. There is value in the content of this article, namely, the cost of the physical components of this device, but to suggest an equivalency between that and what it costs to truly bring one of these devices to market is an insult to the intellegnce of us all.
Reactions: Cameroncafe10a, Morgenland, secretbum and 25 others
T

dont forget sammy gets 200 bucks a screen as well

farewelwilliams said:
wonder how much the R&D was for the FaceID
Click to expand...

It's basically a Microsoft Kinect miniaturised, so not much research needed.
Reactions: Orlandoech, mi7chy, SirRahikkala and 6 others

So the research and development and all that used to justify the cost of the phone, fine. I get it.

So what about the continually rising costs of Apple care. Out of warranty replacements? Just... why?
Reactions: albebaubles
I

Apple's internal cost estimates typically include marketing/logistics/packaging etc and tend to be about $50-$100 higher than analyst estimates at launch. Over the course of the following 6-9 months, the costs will come down to what these "predictions" were. The biggest unknown are also royalty payments to companies like Qualcomm, Nokia, and others. I'd probably add $200 to this cost estimate for my own personal guess.

Either way, it still a very profitable business! Apple used to tell store genius staff that it would take THREE full replacement devices before it cost the company any money.
Reactions: julesme
W

WalterTizzano said:
It's basically a Microsoft Kinect miniaturised, so not much research needed.
Click to expand...

I figure the spent a few bucks miniaturizing something that, before this, was the size of a shoebox.

Not justifying. Just saying that making things smaller, assuming that’s all they had to do, isn’t exactly free.
Reactions: iphonehype, vowell1055, JohnArtist and 2 others

I bet 90% of those who comment will not read the last two paragraphs. Don't forget salaries, bonuses, bills, etc. Countless things to consider in cost analysis of a technological unicorn.

Also, component costs are low. Everything here is estimated, and that should not be ignored.
Reactions: MacsRuleOthersDrool and t1meless1nf1n1t

MacWorld78 said:
This is crazy - Apple used "secret bolthole" in Jersey to avoid taxes via Panorama paradise papers but expect us to pay even more?
Click to expand...

It's too ridiculous until you need it. It normally pays for itself with one incident.
Reactions: iphonehype, MacsRuleOthersDrool, Pufichek and 2 others

They’re a good business so no knocking that, but damn do they make a ton of money per unit. The markup is insane.
Reactions: Dominicanyor, pat500000, skinned66 and 1 other person
You must log in or register to reply here.
Share:
Facebook Twitter Reddit Email Share Link
Register on MacRumors! This sidebar will go away, and you'll see fewer ads.
Sign Up
Top Bottom