I need help with a purchase I made.

I'm on a budget and I bought an Asus 23 inch monitor from Amazon but only when it got home and I turned on I noticed this display was not IPS. It is a good monitor overall with 1MS response time for games and 80.000.000:1 contrast with speakers and 2 HDMI inputs..

Question is.. should I return it and get one with IPS? Not sure if IPS only affects viewing angle or if color reproduction is also better with IPS.

The model I bought is this one... What do you guys think??

You trust color reproduction on any monitor after you calibrate the monitor with a Spyder Pro or ColorMunki.

It hard to say without sitting in fron of the screen. I gennerally prefer IPS displays because the color does not change with the viewing angle, also you need to consider the color gamunt. Generally LED displays do not have a wide range compaired to CCFL displays. I this one of the best bang for the buck dsplays is the Dell U2410.
R

alexxk said:
I need help with a purchase I made.

I'm on a budget and I bought an Asus 23 inch monitor from Amazon but only when it got home and I turned on I noticed this display was not IPS. It is a good monitor overall with 1MS response time for games and 80.000.000:1 contrast with speakers and 2 HDMI inputs..

Question is.. should I return it and get one with IPS? Not sure if IPS only affects viewing angle or if color reproduction is also better with IPS.

The model I bought is this one... What do you guys think??

As someone who does high end professional image editing that monitor is a complete peice of trash, and it's specs are completely misrepresented nonsense.

It isn't even close to calibrated. Do not even consider using that as a monitor for any sort of editing.

IPS doesn't make a huge difference at all when it comes to image editing, nor do most of the features display makers try to get you to care about. The word that you want when shopping for a minitor is "calibrated" if this isn't in the description, do not even consider it.

Calibration, especially pre-calibration makes the biggest difference in monitor quality by far, and it's one of the most time consuming and expensive steps in making a display: 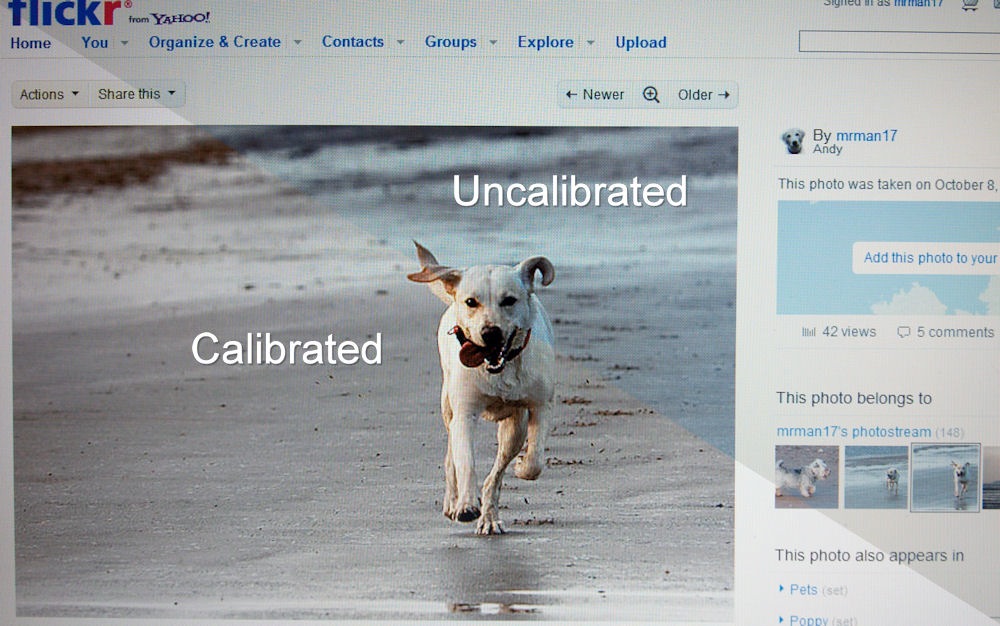 Here's an example that is an understatement of what you can expect between a calibrated and uncalibrated monitor (the example is a scenario where you'd start with an already decent monitor).

Also, don't listen to those people that tell you that you can calibrate your monitor with a USB device you buy for a few hundred bucks either. I've bought plenty of these from 5 seperate manufacturers and tested each one on at least 2 displays. These things can get within a vague ballpark of what is "calibrated" but more often than not they are way off the mark. I have never seen one do a job that isn't visibly way off the mark, under $3,500. Yes you need a $3,500 tool to calibrate a monitor properly. In fact the image above is about the difference between what I see with a Sony refference OLED monitor verified for calibration with a minolta display color analyzer. ($20,000 package), and what an xrite i1display gave me as the "proper calibration" (which it changed it's mind on repeatedly fyi),

So get a monitor that is calibrated FROM THE FACTORY.

If you're looking for something cheap, this is the cheaptest one I'd go with, it's well worth the investment:

All the buzzwords you quoted from the specs of the monitor you posted are more or less BS and you can ignore them.

Both of these figures are falsified and only in theory, and are streteched so far beyond the truth it's insulting. We're talking about the equivalent of putting out an ad for a Honda Civic and saying that it's zero to sixty time is 1/10th of a second* (*1/10th fo a second when accelerationg as payload of a space rocket). Those numbers are more than a thousand times off their real ratio. If you had a monitor with an 80 million to 1 contrast and 1ms "response time", for that price you'd essentially have a product that prints money.

So if the BS specs were real, they could charge 2 million dollars per monitor.

alexxk said:
I need help with a purchase I made.

I'm on a budget and I bought an Asus 23 inch monitor from Amazon but only when it got home and I turned on I noticed this display was not IPS. It is a good monitor overall with 1MS response time for games and 80.000.000:1 contrast with speakers and 2 HDMI inputs...]
Click to expand...

You need not care one bit about those specs. What matters is color fidelity. To get that you MUST buy a colorimeter and use it to calibrate the screen. If you don't do this then just don't bother to worry about the specific technology inside the display.

IPS is a good technology for use with photos but what matters maybe even more is screen glare. those glossy screen are not the best
O

The answer is very simple: you bought one of the cheapest 23" lcds out there, so that's all you can expect. A decent lcd with IPS panel will set you back a lot more, but also the difference in image quality is going to be substantial. After moving abroad, I semi-permanently borrowed my 23" monitor to my brother. He has two decent Dell 23" lcds while mine is a used 22" Eizo lcd. The difference between the two in every aspect is night and day: colors are much deeper, colors do not fade when turning your head too much in one direction (he uses a dual-monitor setup) and the built quality (e. g. stand) is lightyears ahead.

To get a decent monitor, you at least have to triple your budget. If you don't have that kind of money, that's ok. Simply accept the short-comings of your screen and get a better one when you can afford it.
A

Thanks guys I appreciate all the feedback..

I will look over some other options a bit better the make a decision..

MCAsan said:
You trust color reproduction on any monitor after you calibrate the monitor with a Spyder Pro or ColorMunki.
Click to expand...

You still don't trust it 100%. It can still be off. If that fixed every possible problem, higher end displays wouldn't exist. When you run the software for one of those, it tries to hit a set of target values at the point measured by way of software level adjustments. Also I prefer NEC or Eizo overall.

You worded that in the least comprehensible way possible for someone with little knowledge on the subject.

Okay the important things are factory calibrated doesn't mean that much, as you don't know the targets used or how many points are measured. Typically it's just the center to whatever target. It doesn't help with uniformity unless further correction is implemented specifically for that. Backlight bleed and viewing angles are their own issues. You should look at reviews rather than just trust the manufacturer that it's calibrated to their standards.

Calibration in the software sense just means you're rewriting a profile. It measures the basic behavior. It makes some pivotal adjustments at specific points per channel. Trying to hit a specific target is a secondary adjustment, as shown in that calibrated vs uncalibrated. It's obviously not the native white point that was used as a target.

Even after "calibration" with a colorimeter, even if you do everything right including allowing the equipment to warm up and letting it run with minimal ambient light, it's not a guaranteed match to any non sRGB target. I mention sRGB as it's the typical ubiquitous close enough reference for computers, phones, and tablets.

I'm keeping it to that, as this is a big topic. Also ignore anything that says 10 billion to 1 contrast. Dynamic contrast ratio is just comparing the brightest white it can produce at the highest backlight setting to the deepest black at the lowest backlight setting. You wouldn't even want that as your software is still limited to 256 values per channel gamma corrected. They aren't evenly distributed, and at some insane contrast, each step would be enormous. 400:1 is really all you need for an sRGB display.
Last edited: May 22, 2013
You must log in or register to reply here.
Share:
Facebook Twitter Reddit Email Share Link
Register on MacRumors! This sidebar will go away, and you'll see fewer ads.
Sign Up
Top Bottom