I feel like my USB 3.0 isn't working properly on my new 5K iMac.

I purchased this External HD and it take 5-6 minutes to transfer over a 12GB movie file.

Here's a screenshot of my speed...is this working properly?

matreya said:
It looks like it's running dreadfully slow - have you tried another USB 3.0 port?
Click to expand...

I sort of figured out the issues...but it's still acting funky.

When I plug this external hd into ANY usb port it now goes 185/185 (picture attached).

When I put my computer to sleep manually (option/command/delete) and wake it back up I see "Disk Not Ejected Properly" on the top right side...I run my tests and its 35/35 again. If I disconnect the drive and re-connect it goes 185/185 again.

Why is it improperly ejecting the disk during sleep? And how do I resolve this so I don't have to re-connect/disconnect every time this computer sleeps. I've attached my Energy Savings as well.

But I had this only in every beta of El Capitan, not any final version and it was fixed since the 10.11.5 betas or maybe before.

What version do you have installed? All final versions had no problem from 10.11.0 to 10.11.4, just all the betas in between maybe the late 10.11.4 not anymore. I never tried it there because I mostly use Thunderbolt and did not use the iMac for a while. Started using it again in 10.11.5 Beta 3 or 4 without a USB 3.0 problem until now. At least all ports work. But the write speed was a little low as I last tested it. Read speed seemed normal.

Edit: I read only your first post. So the speed is normal now and you have other problems? I never used any USB device longer so I can't say if I have the same problems.
[doublepost=1463838569][/doublepost]I just tested it with a Sandisk Extreme 64 GB USB stick. At first it was for about five minutes only about 10/20 then about 115/240 then again very slow without stopping the test. Really strange. At the moment it's like that: 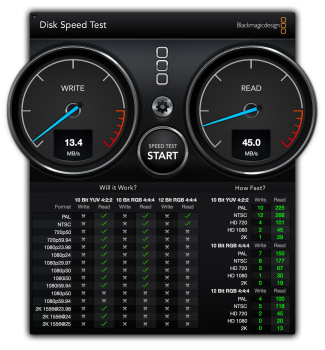 This device normally gets up to 245 MB/s.
[doublepost=1463839010][/doublepost]I changed the ports now and used the one next to Thunderbolt, what always at least detected USB 3.0 devices but had also just USB 2.0 speed. It's even worse or the same. It's starting with almost zero read speed like the other port. Maybe it also had changed after a while, but in the beginning after a few test it looks in average like that: 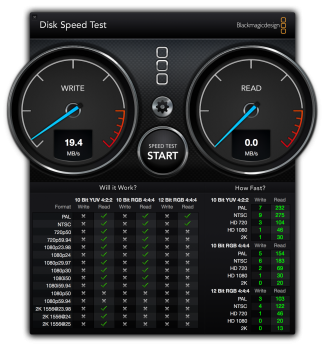 Edit: This is really the worst version ever. I tested it once with beta 4 of 10.11.5 and the read speed was from the beginning 245 MB/s (or even more than SanDisk states as maximum), write I can't remember but I think much less than 100 MB/s. I don't know what the normal write speed should be, but if I remember correctly it was about 200 MB/s or even the same as read.
Last edited: May 21, 2016
Comment

I figured out the problem was in the Energy Saver settings.

So I guess the real question is - should i turn on (or off) the put hard disks to sleep when possible?
Comment
E

I think that does not work for most external disks. At least on my Late 2011 MBP with the FireWire HDD. I installed keep drive spinning.

OP asks:
"So I guess the real question is - should i turn on (or off) the put hard disks to sleep when possible?"

Fishrrman's credo regarding Macs:
"Go with what works for you."

Well that doesn't fix the problem. I thought it did but it doesn't.