According to Apple's System Status page, several of its services are experiencing downtime. Some users may be unable to access the iTunes Store, App Store, Mac App Store, and iBooks Store.

The page also suggests some users may be experiencing issues with the Apple TV, iTunes Match, iTunes Radio, iTunes U, and OS X Software Updates. 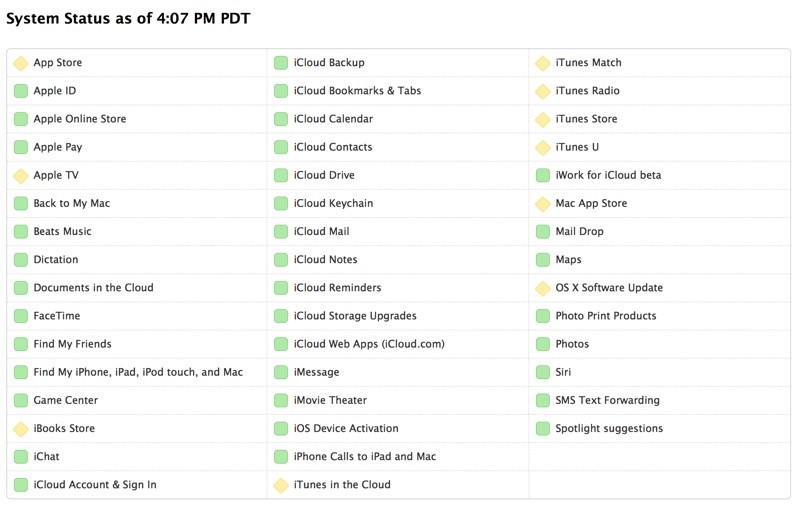 The downtime appears to have started just after 3pm and is ongoing. We have received several emails and tweets from users who are unable to access the App Store or can only access certain parts of the App Store.

iOS App Store Top Charts, for example, have been unavailable since the downtime originally began, and while some app categories were also blank, those seem to be reappearing, suggesting the outage may be short.

Today's App Store outage is the second Apple has seen this week.

Update: Apple's System Status page is back to normal, suggesting all issues have been fixed.

I have 2 apps that need updating, but all I can do is open them. No big deal, but it's still messed up.
Comment

I wonder what they doing in the backend?
Comment
K

Nope. Not fixed yet. When I open the App Store and go to Updates, there are two apps that need updating. For about a second the box says "Update", then it changes to "Open". So still broken...
Comment
E

The iTunes store was out for me yesterday for bit. Bizarre.
Comment
F

Not so much here

There was one yesterday too!

Hey, Tim, what's going on? The cleaning people unplugging the massive Cisco router for all the servers?
Comment

Anyone think it's a coincidence that Apple TV, App Store, and iTunes Store are among the services that went out?? WWDC is gonna be fun this year!
Comment

Still the same. Cannot update anything from the app store.
Comment

Maybe that explains why, when I was listening to music through iTunes Match earlier, the pieces kept skipping. First time that's happened for me. Why are Apple and cloud services like oil and water sometimes?
Comment

This morning my MacBook Pro running Yosemite prompted for credentials for iCloud, FaceTime, and Messages. Although I know I typed the right password, it kept prompting so I finally canceled the prompts.

I use this Mac every day and it very rarely prompts for credentials for those services. Usually it's when the services have had an outage or update, or when I've changed account information.

I mostly post this in case Apple is reading so they'll know the effects their outages have on users. Here's hoping they get whatever problem they're having fixed!
Comment
W

Yup!! Same here in Toronto, the app store is still down on my iPhone 6 and iPad Air 2. I even tried rebooting both of my iToys!

Went to the iTunes store to rent a movie last night, failed a couple times, rented it on Amazon.

I'm looking forward to the day when legal options are more reliable than torrents.
Comment
U

This is still happening on my iPhone 6 at 10 a.m. EDT. I tried restarting my phone but it didn't help.
Comment
C

Too much outages for such big IT company. Someone should be fired for such things. Where I work if you made mistake, you get payment penalty or get dismissed.
Comment
D

The last time this iTunes Store, App Store outage happened, I couldn't access any of my iTunes Match music at all. None of it would stream, just telling me that I didn't own it or what not. That's what I get for relying on Apple's Cloud than storing more of my music locally. It made for a long train ride to work.
Comment
F

Fixed? I don't think so. My US iTunes Store on Mac is doing the same thing it did last night at this time---completely dismissing my correct password and asking m repeatedly to type in password; I can't purchase anything or download any already purchased items to my Mac. Yet things seem fine on my iPhone.

I'm so glad I'm not trusting Apple with anything time-sensitive for back-up. Apple's cloud services aren't reliable. My Google Drive account has been quite flawless for over two years (knock on wood), and cross-platform at that!
Comment