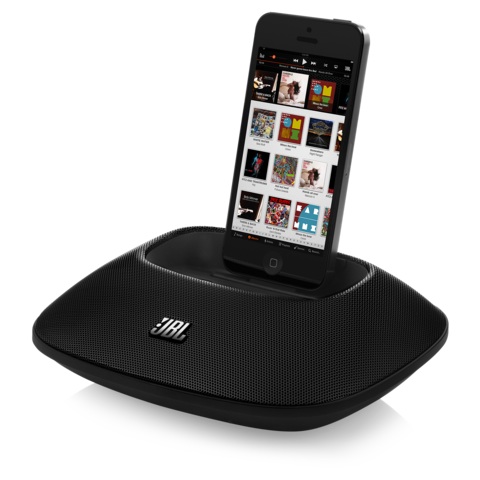 JBL OnBeat Micro​
The two speaker docks include the OnBeat Micro ($99.95) for the iPhone 5 and other small devices, and the larger OnBeat Venue Lightning ($199.95) supporting the full line of Lightning devices including iPad, iPad mini, iPhone 5, iPod touch, and iPod nano. 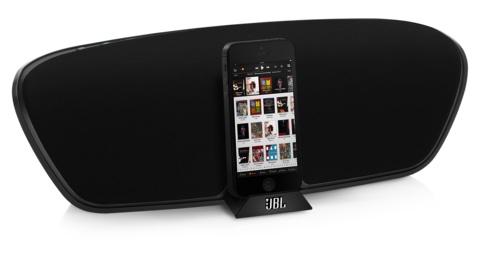 Based on a quick listening session, we can report that the Venue LT sounded very full and clear. Even with the optional bass- or vocal-boosts enabled, it didn't seem like the speakers were having trouble pushing out a high level of volume. The Micro on the other hand sounded decidedly tinny, which we're frankly not surprised about given the size. Both systems are compatible with JBL's MusicFlow app as well, giving you some extended options for tweaking the EQ.
Click to expand...

Engadget also noted a couple of issues with the Lightning connector itself on the docks, including the observation that the docks will not work with many common iPhone cases and that flexibility in the connector on the docks feels somewhat wobbly, allowing flexibility while docking to lessen the risk of breakage but leading to concerns about stability.

JBL was one of the vendors highlighted by Apple during the Lightning connector's introduction in mid-September as having received advance access to the standard. Other vendors included Bose, B&W, and B&O, which should all be announcing their own speaker products shortly.

Wait until the Bose ones come out.

That tiny connector seems a bit flimsy to support the weight of the phone.

Seems like a lot of stress on the part

why is everyone so hung up on "Docks" when we have much simpler/better solutions available. I've never really seen the appeal of a "dock".
M

pssst BIG JAMBOX FTW! no need to connect. Connecting is so 2000!
K

Why do they still make these with docks, I don't get it, use bluetooth and everything will work. Then just put a usb plug on the back incase people want to charge their device. Doesn't make any sense to make it proprietary. But I guess people will buy whatever without thinking.

All these dock type implementations should use the headphone jack as an additional stabilizer, since it's right there on the bottom.

Even if it wasn't an active passthrough (and just part of the stand) ... that being said, making a simple physical passthrough seems like a simple and handy design too.

This just doesn't make any sense to me... why not just have a wireless connection where you don't have to worry about the connection fitting or not.
Last edited: Nov 15, 2012

While Airplay makes a lot of sense, it's also nice to be able to charge the phone at the same time
E

Mr. Gates said:
That tiny connector seems a bit flimsy to support the weight of the phone.

The new connector is pretty robust and is probably as strong if not more so than the old 30pin and is definitely a lot stronger than micro USB.
R

nazaar said:
This just doesn't make any sense to make... why not just have a wireless connection where you don't have to worry about the connection fitting or not.
Click to expand...

nazaar said:
This just doesn't make any sense to make... why not just have a wireless connection where you don't have to worry about the connection fitting or not.
Click to expand...

I've not had a chance to use Airplay yet, but will consider getting an Airplay system since it would be a pain to take the otterbox off of my phone each time to hook up to one of these speakers.

Definitely thinking of getting the OnBeat Venue LTE to replace my trusty old JBL that is now redundant thanks to the old 30pin connector.

Rudy69 said:
While Airplay makes a lot of sense, it's also nice to be able to charge the phone at the same time
Click to expand...

iPhone's come with an AC wall charger, or can be plugged into a PC.

Menel said:
iPhone's come with an AC wall charger, or can be plugged into a PC.
Click to expand...

If i'm right the JBL Venue also supports Bluetooth connection and... the dock is like a drawer... push it and it comes out and vice versa...

I even believe the bitrate of Bt is optimized to a higher standard on this item too.... Not sure though...

but your point is moot. plug it in and stream. Now its charging and playing AT THE SAME TIME. woa.
Last edited: Nov 15, 2012
S

To me it makes complete sense to still have a dock. If I am going to be sitting at home enjoying music, I would most likely want to have my phone charging. Having a dock is a much cleaner option than running a cord from the back of the unit, or plugging it in elsewhere in the room. A dock is great just for simplicity. I agree, bluetooth and Airplay are not bad options. I simply prefer to charge my phone while listening.
C

You'd think this would be common sense...

blutooth music bitrate isn't the greatest. 128kb but correct me if im wrong.
Click to expand...

I thought BT would allow higher throughput than that [for music]? Doesn't A2DP (over BT) specify 320kbps for stereo?

I do know the OOTO BT max bitrate on OSX is craptacular, but there's a simple fix (made a huge difference on our Supertooth speaker).

Though to your point: that's a big perk of using the proposed Airdrop-like tech on audio devices, massive amounts of bandwidth vs. BT (plus far better range).
You must log in or register to reply here.
Share:
Facebook Twitter Reddit Email Share Link
Register on MacRumors! This sidebar will go away, and you'll see fewer ads.
Sign Up
Top Bottom