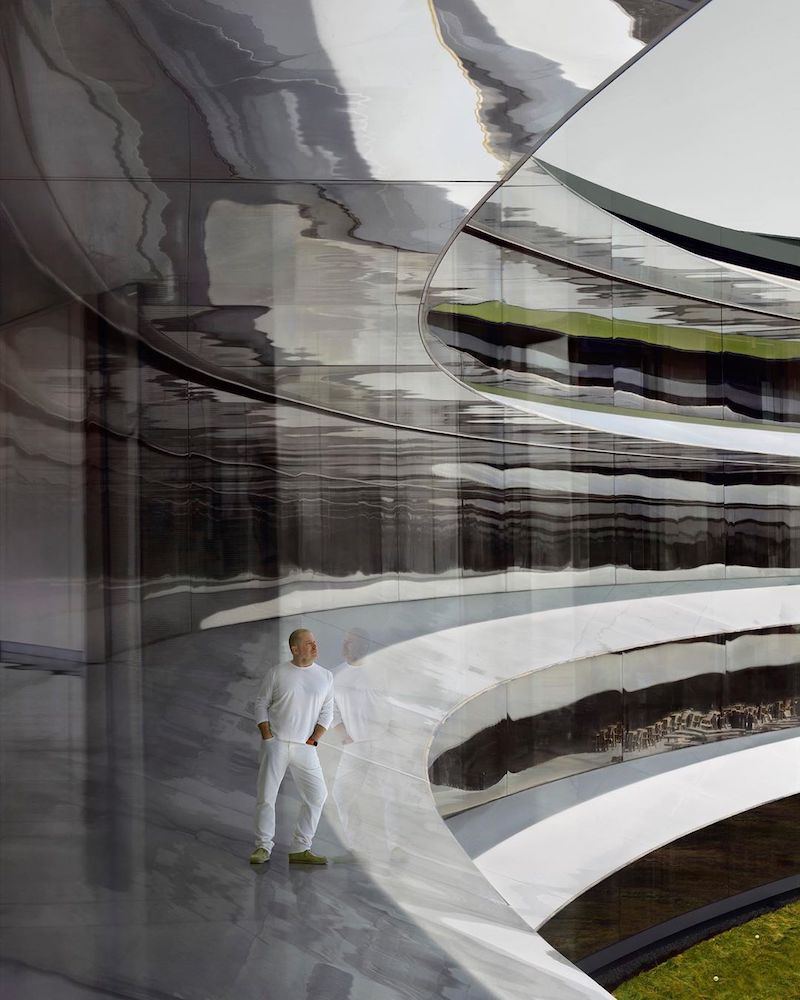 Ive is pictured in a nearly all-white outfit on an outside ledge of the main Apple Park building, which he played a major role in designing.

Jony Ive is one of the leading figures in contemporary design. Described by founder Steve Jobs as 'his creative partner' Ive joined Apple in 1992. From his early cutting-edge designs for the iMac and iPhone to realising the vision of Apple Park in 2017, his role has been central to Apple's progressive ambition and success. As one of a few portraits by Andreas Gursky and the only portrait commission he has undertaken for a public museum, this newest addition to our collection reflects a long-standing professional admiration between two leading creative figures.
Click to expand...

I have been obsessed with Andreas' work for a couple of decades and vividly remember the thrill of our first meeting seven years ago. His very particular and objective presentation of what he sees, whether voluminous landscapes or the rhythm and repetition of supermarket shelving is both beautiful and provocative. Mindful that he rarely makes portraits, this is a conspicuous and particular honour for me.
Click to expand...

It was fascinating to take photographs in the new Apple HQ, a place that plays such a historically crucial role in our present and future. And above all, it was inspiring to work with Jonathan Ive within this setting. It was he who found the form for the technological revolution that was initiated by Apple and his aesthetic has left a mark on an entire generation. I admire his immense visionary power and have tried to express this energy in my portrait.
Click to expand...

Ive's portrait is on display in room 32 of the gallery. Entry to the gallery is free, but some special exhibitions cost money.

Ive has led Apple's design team since 1996. In his current role as Chief Design Officer, he has been responsible for all design at Apple, including the look and feel of Apple products like the iPhone, Mac, and Apple Watch, packaging, and major architectural projects such as Apple Park and Apple Stores.

In June, Apple announced that Ive will depart the company as an employee later this year to form an independent design company named LoveFrom. Apple said it will remain one of Ive's primary clients.

"Jony is a singular figure in the design world and his role in Apple's revival cannot be overstated, from 1998's groundbreaking iMac to the iPhone and the unprecedented ambition of Apple Park, where recently he has been putting so much of his energy and care," said Apple CEO Tim Cook.

*Sigh* "I don't want to be a painter anymore."
Reactions: AngerDanger, Reason077, DeepIn2U and 12 others

Such a great designer.... We'll miss you Jony ?
Reactions: AngerDanger, Moi Ici, Doc Evils and 5 others
B

I miss Jony already, his sexy voice in a keynote was always the icing on the cake. But his design made Apple what it is today, I sincerely hope he left a strong team behind.
Reactions: Moi Ici, 19callum93, Classie and 2 others

Jony come back and fix that damn iphone notch, bezels and protruding back!
Reactions: simonmet, Classie, nickgovier and 1 other person

BSben said:
I miss Jony already, his sexy voice in a keynote was always the icing on the cake. But his design made Apple what it is today, I sincerely hope he left a strong team behind.
Click to expand...

I know! This year it was Dan Riccio in the product launch video and it just wasn't the same.
Reactions: orbital~debris
R

I thought he was wearing crocs and felt so disappointed.
Reactions: freedomlinux, martyjmclean, The Barron and 3 others

nvmls said:
Jony come back and fix that damn iphone notch, bezels and protruding back!
Click to expand...

I’m pretty sure he approved the designs for those iPhones............. and besides, Apple will remain his primary client for his company. Pretty much he has his own desk now, and can still provide designs for Apple.
Reactions: martyjmclean, Halikaarn, mdriftmeyer and 2 others
J

Looks like he is watching to see if someone is parking too close to his Aston Martin.
Reactions: testcard, spacerays, simonmet and 3 others
M

Hmmm. A rather odd stance there. I know he's leaning on glass, but looks like a ranch hand who's been riding horses all day.
Reactions: The Barron, Scottsoapbox, CarlJ and 1 other person

I can't work out if Jony is crooked or if that's the perception he intended us to have....
Last edited: Oct 7, 2019
Reactions: TheDemogordon and Brandhouse
N

I can’t get my head around this picture. Where is he actually standing, on some kind of sloping ledge?
Reactions: TheDemogordon, simonmet, orbital~debris and 1 other person
M

Outside of Jobs when he returned in the 1990s, I can't think of anyone else at Apple whose contributions have driven Apple's astonishing success more than Ive.
Reactions: martyjmclean and Kabeyun
M

neilg said:
I can’t get my head around this picture. Where is he actually standing, on some kind of sloping ledge?
Click to expand...

And what's he leaning against and has his reflection on? Seems like two photos
Reactions: orbital~debris

I didn't realize the surfaces were so reflective, especially underside of the ledges. Not a great photo. But I'm a nobody compared to him, so my opinion means nothing. ?

He’s done some great work in the past but the last five ten years - other than posing for awards/knighthood/puff pieces - what’s he done? Seems like he was a real innovator in marketing (himself as well as being fortuitously employed), but its well past the time to tap the brakes on his deification. The work he did is at best the ephemeral product of its time and not a scientific breakthrough in method.
Reactions: Mike_Trivisonno, Brandhouse, AlexGraphicD and 1 other person
N

I'll betcha he's just itchin to get out of that glass coliseum for good
Reactions: Objectivist
A

The Macrumors comments are making me feel all warm and fuzzy inside.

Jony will be missed but I can't help but think that the dozens of hardware designers at Apple and the hundreds of people who design things at Apple are ready for the next chapter. 20+ years as design head is a long time. Who will be the next Jony? What will they do with the company's products? Will there be multiple Jony's who share the spotlight? What is the design language of the next 20 years? I'm excited for the future and excited that Jony was able to call it quits and go work on something else. He's earned this semi-retirement and his team is ready to shine their light and stand on their own w/o "Sir Jony" looking over them.
Reactions: Brandhouse, martyjmclean and Halikaarn
You must log in or register to reply here.
Share:
Facebook Twitter Reddit Email Share Link
Register on MacRumors! This sidebar will go away, and you'll see fewer ads.
Sign Up
Top Bottom