Campbell asked about Ive's personal involvement in the manufacturing process, bringing up a rumor she heard that he slept on factory floors when Apple was making the first iPhone. Ive didn't specifically confirm the rumor, but he mentioned he has "stayed for months" in the places that Apple makes its products. "I don't know how you can be an effective designer and not do that," he said. 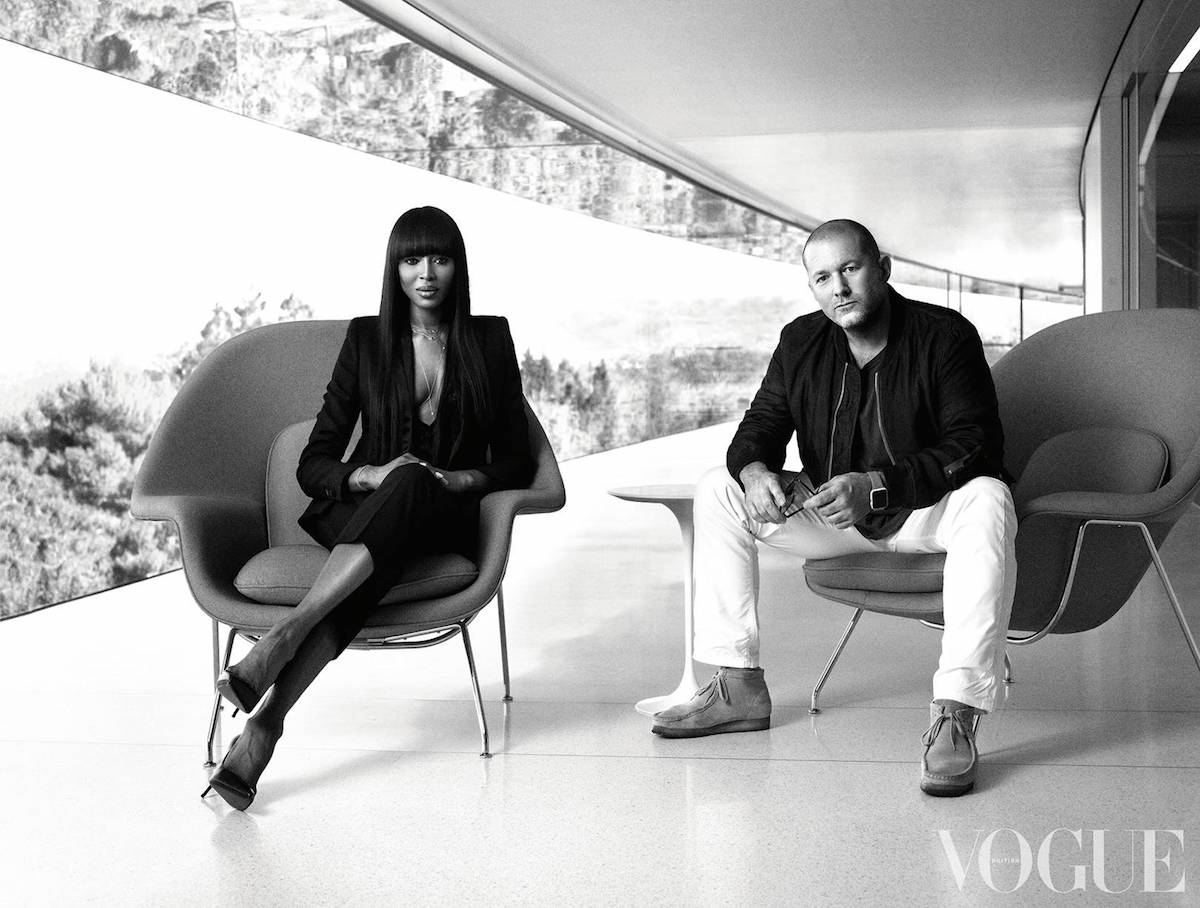 On the topic of Apple's secrecy:

I don't really see it as being secretive - if I'm working on something and it's not finished, I don't want to show somebody! One of the defining things about the nature of ideas is just how fragile they are: when you're not sure whether some-thing is going to work, the idea is vulnerable. Part of protecting the idea is to be careful about who you show it to; premature criticism can shut something down that perhaps deserves more of a chance.
Click to expand...

Ive also discussed former Apple CEO Steve Jobs, mentioning that the two "looked at the world in the same way," and that he appreciates and misses Jobs more as time goes on. When Campbell asked about lessons learned from Jobs, Ive said that Jobs' way of thinking has stuck with him: "There was an incredible liberty in the way he would think. He wouldn't obey rules that were perceived to be accepted wisdom, and he had an extraordinary optimism and enthusiasm."

Ive also stated that he thinks of Jobs and his values when hiring new people at Apple:

The main thing is how they see the world. Ultimately, Steve's legacy is a set of values and, I think, the belief in trying. Often the quietest voices are the easiest to overlook, but he was brilliant at listening as well as leading and speaking. A lot of com-munication is listening - not just listening to figure out what you want to say in response.
Click to expand...

The Ive-Campbell interview has been published ahead of Ive's sponsorship of former fashion designer Azzedine Alaïa's work at London's Design Museum in May. Ive said that he used to watch Alaïa design and was in "utter awe": "It was incredible to see the way that he understood material, and the way he would be frustrated with material and so create new ones. And then these beautiful forms would emerge."

Careful Johnny..... Phones have been know to go flying at people’s heads from the hands of Ms. Campbell.

I don’t think anyone believes that Apple or any other company should tell everyone about products under development.

But when the product has a release date then customer related details should be easily available. The HomePod was released and potential customers didn’t know what products and services would work with it, and they found out in dribblets of information released up to and even after the product was available. And the battery fix in IOS version 10 wouldn’t have caused the uproar that Apple is still having to deal with if they had announced WHAT the fix actually did. Some people still wouldn’t like it but at least you would have known WHY your phone was slow. Instead a 3rd party released tests showing what was happening and Apple looked bad.

Anything can be taken to extremes. You can let too much information out too soon so rivals can counter what you are doing. Or you can be Apple and try to keep things secret that they should be telling customers, if only to cover their behinds.
Reactions: toph2toast, loveandhavefun and miniyou64

Naomi Campbell, the well-known writer and blogger on all things tech. On a more positive note, Jony’s Wallabees are wearing well.
Reactions: CarpalMac, Huck, DogHouseDub and 2 others
U

Unfortunately, there's not a lot of design process there, which I suppose is to be expected.
Reactions: miniyou64

There’s not much thought in his designs. Flat is ugly.
Reactions: Huck, miniyou64, HJM.NL and 2 others

Did Jony Ive himself setup that photo shoot? Looks like someone forgot to setup a decent background and then had to blowout the highlights to hide the parking lot in the background.
N

What we need is less talk about how great it is and more greatness. I guess when you can do it, do it, when you can't do it, talk a lot about it and maybe people won't notice that you can't do it.
Reactions: Huck, opeter and Feyl

Hate to sound like the token photography snob, but the highlights in that photo are blown out of whack. Amazed they couldn't do a better job.

Jony and Naomi are working that camera!

Another ultra-high-level puff piece. But this is Vogue we’re talking about, masters of the superficial.
Reactions: CarpalMac, Yvan256, Huck and 5 others

I hope the future bring a device similar they have in Netflix Altered Carbon Series.

testcard said:
Naomi Campbell, the well-known writer and blogger on all things tech. On a more positive note, Jony’s Wallabees are wearing well.
Click to expand...

I know right! Since when did Naomi Campbell become the go-to person for a hard-hitting interview with one of the top technology designers of the current time?

Amazing how people are critical of everything. This is a Vogue interview and Apple advertises quite a bit on the magazine. So while it’s a piece to make Jony and Apple look good I would not expect a magazine like that to be critical of a client.
After all they are about fashion and not about tech.
Reactions: I7guy

gugy said:
Amazing how people are critical of everything. This is a Vogue interview and Apple advertises quite a bit on the magazine. So while it’s a piece to make Jony and Apple look good I would not expect a magazine like that to be critical of a client.
After all they are about fashion and not about tech.
Click to expand...

And yet, I doubt those who are critical can do what he’s accomplished.

Vasilioskn said:
There’s not much thought in his designs. Flat is ugly.
Click to expand...

Send us a link to your work so we can compare.

gugy said:
After all they are about fashion and not about tech.
Click to expand...

Thank you for succinctly describing what is apparently Apple's new direction.
Reactions: Huck, nt5672 and testcard

Jony has hit a plateau in his design philosophy. What was new, fresh, and revolutionary in its usability and simplicity starting with the iPod at the turn of the century is now looking quite dated. The overall design peaked with the original iPhone back in 2007. You had a couple of evolutions that stood out (the glass iPhone 4 and the monolithic slab of the iPhone 5, the flat design of iOS 7), but overall the design progress has been lackluster over the last decade.

Many articles about Jony focus on what he accomplished in the early days of the iPod and iPhone. There may be some about the "spaceship" design of Apple's campus, but there simply hasn't been much progress on Apple's actual product design in years. At this point Jony is like Tiger Woods. He has done a tremendous amount in his field, but his best days are likely well behind him. We hope for a comeback, yet when it really comes down to it all that gets talked about is accomplishments from years ago.
Reactions: CarpalMac, Huck and Cole Slaw

Vasilioskn said:
There’s not much thought in his designs. Flat is ugly.
Click to expand...

Lately, little innovative has been released by Apple, but that doesn't put Ivy's heritage into question.
L

miniroll32 said:
Hate to sound like the token photography snob, but the highlights in that photo are blown out of whack. Amazed they couldn't do a better job.
Click to expand...

It's a fashion magazine. I have no doubt it was an aesthetic decision.

Please Johny tell us more about the magic mouse bottom connector innovation, ergonomics, new keyboards, etc and how to sell them like toilet paper, we'd love to hear that!
G

miniroll32 said:
Hate to sound like the token photography snob, but the highlights in that photo are blown out of whack. Amazed they couldn't do a better job.
Click to expand...

Looks like it was a good choice to me. Deemphasizes the background vs. the two figures in the foreground. It's not an architectural photo, so those details aren't really necessary at all.
Reactions: CarlJ, petsounds, artfossil and 1 other person

mikecorp said:
I hope the future bring a device similar they have in Netflix Altered Carbon Series.
Click to expand...

Yeah cuz I really want my consciousness encased in technology that can be virally infected from orbit. :-/
[doublepost=1522688677][/doublepost]

Yeah because eliminating the physical keyboard from cellphones was in everyone’s radar on 2007, amirite?

I7guy said:
And yet, I doubt those who are critical can do what he’s accomplished.
Click to expand...

While at times I criticize Jony, you gotta give the guy more praise than criticism.
But this is MR, most people here just love to whine.
Reactions: CarlJ and I7guy
You must log in or register to reply here.
Share:
Facebook Twitter Reddit Email Share Link
Register on MacRumors! This sidebar will go away, and you'll see fewer ads.
Sign Up
Top Bottom