This is what is wrong with the patent system. Yes Apple uses patents as weapens. they also develop a lot of things. this Troll makes nothing. the patent system really needs to be fixed. if you patent something and do not use it or show that you are developing it into a product within 3-5 years; that patent should expire or be invalidated. This will stifle innovation. it already has. It is ridiculous that patents last 20 years. if not product exists for it it should be invalidated by 3-5 years. 20 is insane. if someone creates something with your patent that you were sitting on you should have to prove you intended to use it. if you cant prove that, you should lose the patent.

bbeagle said:
Or MOST companies. Almost EVERY company holds many patents they don't use. That's the nature of the beast.

Microsoft and Google hold far more patents than Apple - why aren't you singling them out like you are with Apple?
Click to expand...

Ah yes, yet another patent troll. 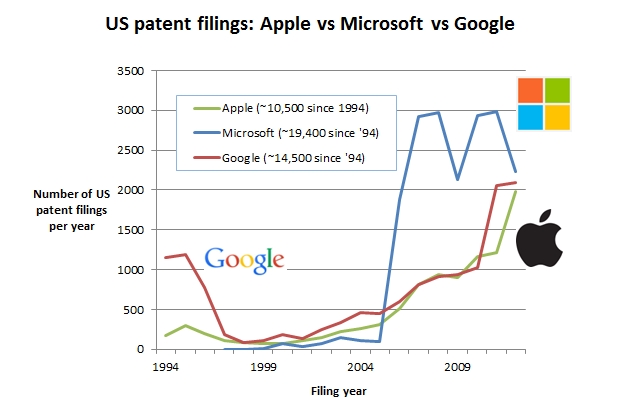 Precisely why the patent system needs some changes with fresh new 21st century thinking.
B

You do realize companies can purchase patents, correct?
J

blahblah100 said:
You would need to ask Apple...
Click to expand...

Huge difference between being a company like Apple, Google and MS that hold patents they don't use, but actually make products and patent trolls who buy patents they not only don't intend to use, but didn't even create. In many cases actually look for patents that may be able to be used against a company that already has a product. They take advantage of the fact that patent law practice is extremely vulnerable to judges who haven't a clue if a technology patent should even be valid let alone applied to the product in the suit. I'm not saying there is an easy fix as anything you do to fix it risks losing protection for legitimate patents, but it needs to be fixed. Patent trolls are among the lowest form of business scum.

Smartflash, Apple, they are all from the same mould. Just because Apple have created a pretty Public Image for themselves it does not mean they are not greedy, money-grabbing sharks looking to exploit the market in exactly the same way that Smartflash are. Of course you can argue, "Oh but they do this and that. They are innovative." I, too, do this and that. I am innovative. Any chance of a few billion dollars transfer to my bank account, then? I'm better looking than Tim Cook by a long shot too.

blahblah100 said:
You do realize companies can purchase patents, correct?
Click to expand...

I'm responding to a post saying an untrue statement that Apple's patents were MUCH MORE than Google's patents.

Show me the numbers then to prove Apple has more patents than Google.
Last edited: Jul 8, 2015
C

bbeagle said:
I'm responding to a post saying an untrue statement that Apple's patents were MUCH MORE than Google's patents.

Show me the numbers then to prove Apple has more patents than Google.
Click to expand...

What you posted were filings per year, not actual amounts of patents.

Well, I hold a patent for a medical device I invented in College. I don't make it, neither does anyone else.
I'd kind of like it if a so called patent troll stumbled across it, offered to buy patent from me.

I'd consider it reasonable if I then learned that they were licencing that patent, or claiming damages from someone using my invention. What reason would they have otherwise had to buy my patent off me?

I could be misunderstanding this whole thing of course...

cortz said:
What you posted were filings per year, not actual amounts of patents.

If you look at the graph I posted, it shows cumulatively Google has more patents than Apple.

Your patent bar chart is 3 years old, and is far below the numbers currently. In only ONE year, 2014, Google filed TWICE that many.

By this standard all universities and all organizations that do basic research are patent trolls.

In my view, if the owner has a legal right, they have a legal right. That their logo is purple, and their manufacturing is in China, and the license the patent from a third party only to be jerks about things, should hardly be the point.

Because there's no law in this country that says you have to make something when you come up with an idea. The whole purpose of a patent is to protect your IDEA, not a product. Not everyone can afford to implement their ideas. Robert Kearns came up with the delay wiper mechanism patented his idea and then tried to sell it to the auto-companies. It was a good idea. It's something we all use today. That didn't stop big corporations from trying to just STEAL his idea so they didn't have to pay him for it. (https://en.wikipedia.org/wiki/Robert_Kearns) You apparently would argue it's complete crap for him to sue Ford as the guy was just a patent troll and should have started his own car corporation to put those delay wiper mechanisms in. Meanwhile, all "Big Three" auto companies started making cars with delay wipers using his idea and didn't pay him a dime. He had to sue. Damn patent troll!

I also find it amusing that when Apple sues for patent violations (as it does ALL THE TIME), that's fine and dandy. But if it's not a mega-corporation (or even if it is like Samsung), SCREW THOSE PATENT TROLLS!!!!

The real problem is that there should be no such thing as a "software patent" as such. They're far too nebulous and there are literally dozens of ways to skin a cat in programming without duplicating any type of code. In other words, patents are granted far too liberally in most cases and that leads to ridiculous lawsuits where the patent says things like "stores phone numbers to be transmitted over a computer network". There's no way something like that should EVER be granted a patent. It's basic computing with basic network transmission and any kind of data has already been done before. But that's exactly the kind of thing companies like to patent and then sue EVERYONE INTO OBLIVION for putting it on their "phones" at some point. Thus, the problem is not that small companies and individuals shouldn't be allowed to patent things even if they don't make them, but rather generalities and simple abstract ideas shouldn't be allowed a patent in the first place! Sadly, NO ONE wants to deal with that issue, especially not the Supreme Court in the USA because it could potentially unravel most of the patents of the modern era. But the problem with allowing things to continue as they already have is that big corporations can just sue/litigate smaller companies and people into financial oblivion as these cases take forever and cost a fortune.
D

Patents are awarded for the invention, not the implementation. See Hyatt vs. Intel for example. Hyatt never implemented a microprocessor but holds the patent which he applied for in 1970; Intel applied in 1971 and was awarded the patent but it was later overturned because Hyatt filed first. So no, patented ideas do not have to result in implementation.

That's ironic, coming from a company that wanted others to pay them $30-40 a device for their patents on common items like slide to unlock.

And even more ironic, considering that Apple was one of those who spent billions buying up old Nortel patents, and then when they turned out not to be such a good weapon against Android, co-created one of the worst patent troll companies on the planet, Rockstar, which does nothing but employ engineers who probe everyone's code to see who they can sue.


ineedamac said:
Complete crap. How can you hold patents when you do not make any products that use any of those patents?
Click to expand...

Every company has lots of patents they don't use. Often they're gotten simply for self-defense just in case, and are not used offensively.

Apple, OTOH, has sued companies like Samsung using patent claims that Apple themselves do not use.

Dilster3k said:
Off-topic: I'm sorry but that new icon just doesn't blend in nicely with my dock...
It looks nice, but doesn't quite fit in next to the App Store & iBooks icons.
Click to expand...

Bingo. Super pretty, but doesn't fit in at all.

The more I read and hear about these patent trolls, the more disgusted I become with them. 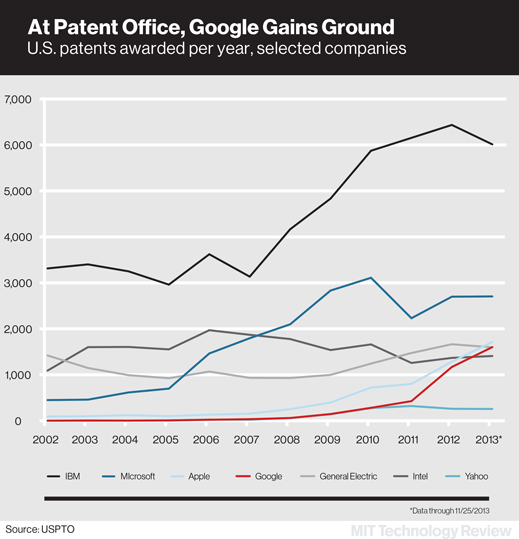 Your graph leaves out 2014, where Google was awarded MORE patents than Apple,
AND it proves my point - that 'Google holds far less patents than Apple' is FALSE, which is the entire point. (They're very close to each other)

bbeagle said:
Your graph leaves out 2014, where Google was awarded MORE patents than Apple,
AND it proves my point - that 'Google holds far less patents than Apple' is FALSE, which is the entire point. (They're very close to each other)
Click to expand...

Just because Google surpassed Apple in the last year, doesn't mean that their overall patent number is close. In 2012, Apple had a 3000 patent lead on Google. Remember, Apple had a 20 year head start (although admittedly some of those older patents may be too outdated for any real use).