Did a fresh install of Windows 10 for the Evo.

The read speeds are much faster and the writing speeds are certainly blazing fast. Best of all, the machine now feels fast. Crystal Mark shows 3.2 GB/s read and 1.9 GB/s write! Even after filling the drive and installing the Samsung NVMe driver. Take that rMBP!

With 1TB, now I have the space I need without having to carry around my Samsung T3 and/or WD Passport.

Too bad I had to spend $477 this on an already $1900 system though (Signature Edition). The lesson here in the future is to buy the smallest capacity then upgrade to your own SSD (assuming Dell let's us do that in the future). I probably just sell the stock SSD in an enclosure on eBay to offset the cost. Oh well, I'll expense it against my side-gig income.

One of the temptations that I have with certain non-apple laptop is the fact that I can upgrade the ram and storage.

Definitely go for the minimum configuration in that and then upgrade yourself.
B

Did you do a fresh install on the old SSD? I have the original Crucial M.2 SSD in my 4 year old Dell XPS 15 and it is fast.

I did replace the hard drive with an EVO 850 1TB to speed that up.
R

belvdr said:
Did you do a fresh install on the old SSD? I have the original Crucial M.2 SSD in my 4 year old Dell XPS 15 and it is fast.

I did replace the hard drive with an EVO 850 1TB to speed that up.
Click to expand...

No, it was a Dell Signature Edition from the MS store so no bloatware. One of the things about the stock configuration is that Dell was using a Toshiba SSD and the Samsung PM951. I got the 951, which was apparently the MUCH slower SSD. I always felt it over the last year, and just chalked it up to "that's the way it is".

Beginning this year, I started learning about SSD's (I haven't been on Windows in a LONG time and just let Apple take care of all those details, but since the barely make Mac's anymore...), NVMe, PCIe's, and CrystalMark. Ya, my stock laptop was slow. I thought an SSD was an SSD.

Of course, the SSD wasn't available in the beginning of 2016, and lot of developments in SSD's have developed since then. If I done my research, I would have returned my XPS 15 until I got a Toshiba SSD.
R 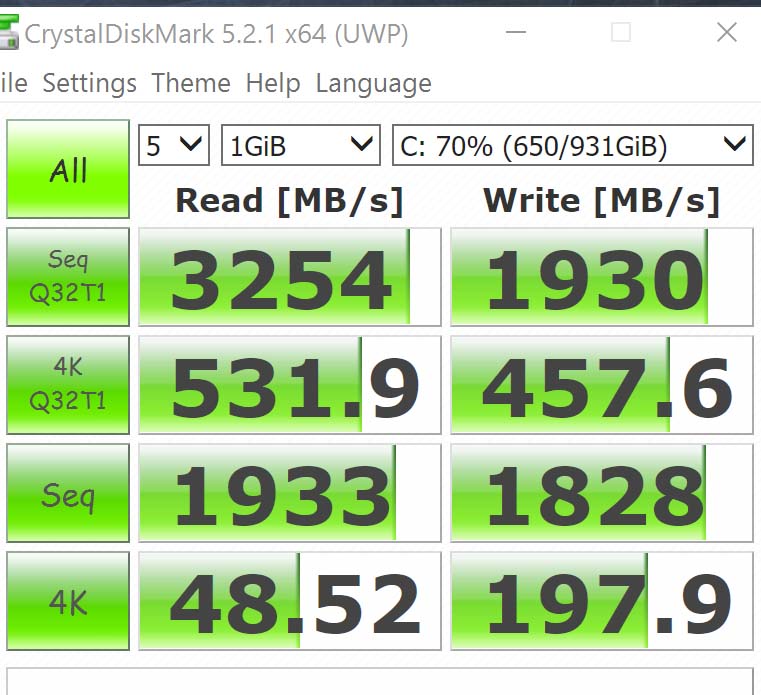 That is some insane numbers, I have a late 2013 retina with 1TB PCIE Samsung and I only get like 990MB read/write. Also have a Thinkpad p50 and with I think an OEM 960 version and my numbers are not like that.
You must log in or register to reply here.
Share:
Facebook Twitter Reddit Email Link
Register on MacRumors! This sidebar will go away, and you'll see fewer ads.
Sign Up
Top Bottom